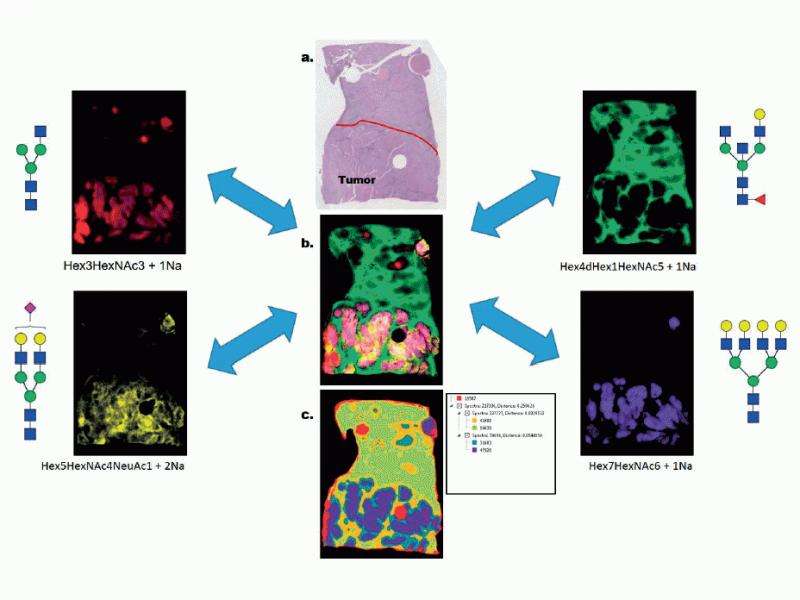 Glycosylation accounts for the majority of post-translational modifications (PTMs) of proteins, and changes in glycosylation are known to play a key role in disease state. Novel mass spectrometry (MS) imaging techniques are now revealing the importance of these changes in tumour progression and assisting in cancer biomarker discovery.

The rising number of deaths from cancer brings an urgent need for clinical biomarkers that can determine the risk of developing the disease, serve as an initial diagnostic tool and monitor disease progression. Cancer biomarkers are either produced by cancer cells themselves, or by non-cancer cells in response to cancer. Although there are more than 60 commonly-used cancer markers available (1), new discoveries are slow to progress through validation and reach clinical use, and the challenge continues to find those with sufficient sensitivity (to detect disease correctly) and specificity (to reject healthy individuals correctly). Aside from providing useful information to guide clinical decision-making, cancer biomarkers are increasingly linked to specific molecular pathway deregulations and/or cancer pathogenesis to justify application of certain therapeutic/interventional strategies (2).

Ideally, a clinician could identify a tumour biomarker from a simple blood test. For this reason, serum biomolecules are popular targets for cancer biomarker discovery, and can be derived from proteins, peptides, DNA, RNA, glycans, lipids and metabolites present in blood circulation. Glycans are information-rich, universally abundant biomolecules found throughout all organs and tissues in the human body (3). This, and the fact that they contain information that reflects both internal and external factors on an individual’s health and disease, confers considerable translational potential on glycans.

Glycosylation is an important process as it defines intracellular interactions – how cells ‘talk to’ and ‘see’ each other – but glycomics is still an emerging field. In recent years, glycans have been increasingly recognised as mediators of important biological processes, and studies are improving our understanding of a range of human diseases, and how to treat them (4). For example, glycosylation determines blood groups, and what the body recognises as ‘self’ and ‘non-self’ in an immunoregulatory capacity. The glycosylation on a cell’s surface is recognised by the immune system and facilitates immune cell binding, particularly in cancer.

All cells are surrounded by a coating of glycans known as the glycocalyx, and extracellular matrix (ECM) proteins outside of the cell are often glycosylated. Protein glycosylation is a post-translational modification (PTM) usually grouped into either N- or O-linked glycosylation, involving linkage of sugar chains to the nitrogen or hydroxyl groups of specific amino acids, respectively (5). Glycosylation is one of the most common and complex PTMs – it is estimated that more than 50% of human proteins are glycosylated (6).

Many glycome studies are focusing on the relationship between N-linked glycosylation of plasma glycoproteins and different diseases (4). Minimal structural modifications can significantly influence glycoprotein function, so detailed characterisation of glycan pattern is important in disease and pharmaceutical research. In a disease state, changes in glycosylation can be crucial, so research on how glycans change on the surface of cells in response to different disease processes is integral to the discovery and development of new treatments. At the pathological level, changes in glycosylation and their importance in tumour progression have been well documented over time but, until now, have not been effectively demonstrated and localisation has not been achieved.

Glycan-based biomarkers are currently used for a range of diagnostic purposes, but most techniques for the identification of these markers are not sufficiently sensitive to be used at early disease stages. Mass spectrometry (MS)-based imaging techniques are breaking new ground in identifying and quantifying the chemical composition of glycans. In contrast with traditional serum-based techniques, MS methods leave the tissue sample intact, and spatial resolution is maintained. 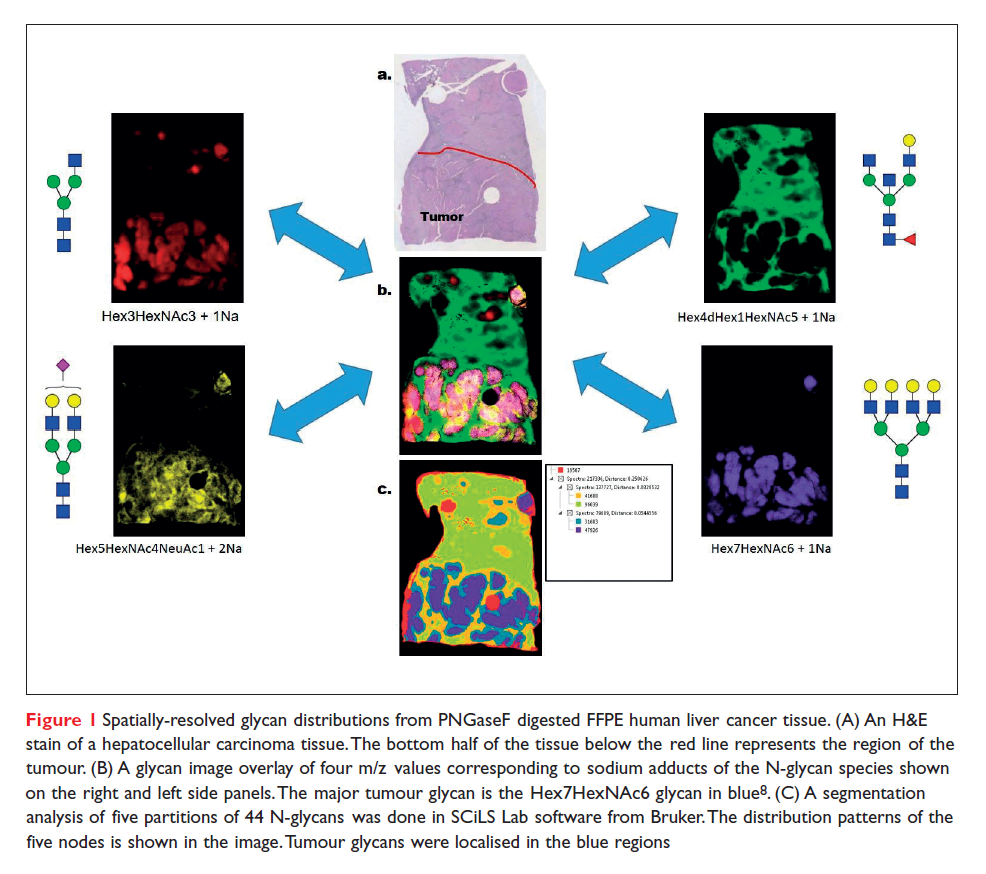 Collaborative research at the Department of Cell and Molecular Pharmacology and Experimental Therapeutics, Medical University of South Carolina (MUSC), is driving the development of imaging methods to better understand disease progression and improve treatments. The Drake, Mehta and Angel labs collaborate on various aspects of biomarker development, benefitting from sharing expertise and findings.

Highly-sensitive mass spectrometers are required to conduct the ‘needle-in-a-haystack’ experiments characteristic of glycan-based biomarker discovery. These instruments must also be robust to handle, visualise and extract large amounts of data generated from analysing the vast number of tissues required. Magnetic Resonance Mass Spectrometry (MRMS) provides this sensitivity, enabling the analysis of incredibly small amounts of starting material, to see attomolar (10-8) or femtomolar (10-15) levels of sugar, with ease. This is the first step in all analyses, to identify changes in glycans in cancer tissue, which can then be validated on a higher-throughput instrument. This workflow has allowed the MUSC group to confirm that, for the most part, the same glycan and glycoprotein modifications seen in the circulation are directly associated with liver tumours and not adjacent tissue, or a distally adjacent tumour.

One of the MUSC group’s key interests is liver disease. Non-alcoholic fatty liver disease, caused by excess fat consumption, leads to fibrosis and cirrhosis of the liver, which is one of the primary risk factors for liver cancer. Most serum glycoproteins originate in the liver, so the close relationship between liver and serum glycoproteins suggests that liver diseases associated with abnormal glycosylation can display significant changes in serum glycoprotein glycosylation patterns (7). Until recently, the most widely-used clinical methods to detect liver disorders were hepatic ultrasonography and liver biopsy. However, ultrasonography cannot reveal primary stage tumours, and liver biopsy is an intrusive procedure, so there is a need for more accurate, non-invasive markers, such as serum-based biomarkers, that can routinely assess the state of the liver (4).

The biomarkers of liver cancer currently being marketed require simple, plate-based assays that only analyse one protein at a time and provide a binary ‘yes/no’ answer of whether there is cancer present. This is problematic because, in general, one single protein will not be found in all cancers as it is an incredibly heterogeneous disease. Therefore, multiple biomarkers are needed to detect all cancer types at different stages of progression.

An advantage of MALDI Imaging is that the defined masses of glycans can be obtained and assessed reproducibly – a crucial feature for translating biomarkers into the clinic. Glycans in formalin-fixed tissues have shown to be excellent targets due to their well-defined structures and the lack of background. The signal is reproducible as it is generated from the activity of the recombinant enzyme peptide N-glycosidase (PNGaseF Prime™) – developed by Dr Mehta – enabling glycan imaging in tissues for the first time. This method is now routinely used to examine the distribution of N-glycosylation related to the pathology of disease (8).

For example, in one study the PNGaseF method for MALDI Imaging was assessed on archived pathology FFPE tissue blocks for liver cancer (9). Changes in N-linked glycosylation are known to occur with the development of many cancers, including hepatocellular carcinoma (HCC). HCC is the most important late complication of chronic degenerative processes of the liver, and its risk factors include cirrhosis, hepatitis B and C viral infections, alcohol abuse and metabolic syndromes such as diabetes (10). HCC diagnosis is often made in advanced stages of the disease, leading to a survival rate of just 18% at five years (11).

Serum protein glycoforms that are altered in liver cancer have previously been studied, revealing considerable changes in serum N-linked glycosylation with the development of HCC, and are being developed as biomarkers. Tissue-based glycan imaging with MALDI MS is now being used to elucidate the origins of these glycans in human HCC. An example of liver cancer glycan imaging is shown in Figure 1, as different N-glycans were detected using MALDI quadrupole time-of-flight (QTOF) MS, which could distinguish between non-tumour and tumour regions. Four representative glycan species are shown from a total of 44, as well as an overlay image and segmentation analysis image done in SCiLS Lab software.

Translating research to the clinic

Developing a possible biomarker into a reliable and accurate clinical assay is extremely challenging. One marker may be useful for establishing cancer aggressiveness, but the same marker might not necessarily inform best treatment protocols, and these will again vary according to the type of cancer.

The glycan imaging methods developed by the MUSC group enable this detection and are vital new tools to translate findings into clinical biomarkers. For example, by combining glycopathology markers identified by MALDI Imaging of glycans in the tumour microenvironment with established histopathology markers, the aggressiveness of a cancer can be established. Glycan imaging approaches are therefore more than imaging tools, they are emerging as clinically-viable methods with significant potential impact in the diagnostic space.

These assays currently in development using rapid MALDI Imaging techniques provide the potential to create signatures of the changes occurring on different proteins during disease progression. The ultimate aim is to develop a single slide capturing, for example, 150 glycoproteins from a patient blood sample to determine the type of cancer, differentiate the cancer stage and establish tumour aggressiveness – based on the glycan signature. This type of liquid biopsy precision medicine assay is almost ready for liver cancer, and our labs at MUSC are now looking into cell-based assays, where patient-specific cells can be analysed to determine their sensitivity to certain therapies, based on the glycan signature.

One of the long-standing challenges of glycan imaging is the number of structural isomers. In glycobiology, how sugars are arranged on proteins dictates the impact on cancer growth and which cancer pathway has been activated. The current MS methods used at MUSC enable predictions to be made on the arrangement of sugars, but further analysis is required to confirm the glycoforms. Cutting-edge MS methods, such as trapped ion mobility spectrometry (TIMS), powered by parallel accumulation-serial fragmentation (PASEF) technology, have the potential to drive future glycan imaging at MUSC. Incorporating ion mobility separation could also help identify protein carriers, which is currently not possible, to link the glycan maps to the proteins themselves and build the entire picture of the glycopeptide. DDW

Dr Richard Drake is Professor and Director of the MUSC Proteomics Center, having joined the university in 2011. He has a research background in protein biochemistry and glycosylation and his post-doctoral studies focused on the mechanisms of N-linked glycan synthesis, later establishing their potential as biomarkers.

Dr Peggi Angel joined MUSC in 2015 as Assistant Professor at the Department of Pharmacology and Director of the MS Imaging Research Center. She has an established background in analytical chemistry and MALDI Imaging of biological and engineered tissues.

Dr Anand Mehta is Professor and Smart State Chair in Proteomic Biomarkers at MUSC, having joined in 2016. His background in viral hepatitis research has paved the way for his interest in liver cancer, leveraging his experience in glycobiology to develop biomarkers.