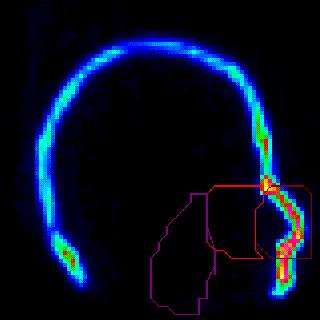 Gamma scintigraphy is a non-invasive technique with applications in the development of drug products and the assessment of pharmacodynamic effects in humans. It enables the assessment of critical performance parameters that in vitro techniques attempt, but often fail, to predict. Quantification of pharmacodynamic effects (eg gastrointestinal transit; gall bladder emptying; lung mucociliary clearance) provides insights into the mode of action of drug candidates.

The cost of developing a new drug product is now estimated to exceed $1.5 billion, with an estimated $20 million being spent per molecule in the early development phase (1). Currently, ~70% of these projects will fail at, or before proof of concept (2).

This, coupled with the threat from generic competition, has resulted in a drive for reinvention of the pharmaceutical industry. A more efficient, cost-effective model is being implemented with the aim of increasing the number of drug candidates available for development, and simultaneously reducing late stage attrition (3).

This strategy hinges on the use of innovative clinical protocols in early development to enable detailed, scientifically-driven investigation of product performance. The development team needs access to a full range of tools that can be integrated into routine early development studies, enhancing the data obtained.

Gamma scintigraphy is one such tool. It provides the means to assess critical-to-performance parameters, which in vitro methods attempt but often fail to predict. It also provides a gold standard method for the direct quantification of pharmacodynamic effects, providing insight into mode of action of drug candidates.

Gamma scintigraphy is an imaging technique that enables the direct visualisation and quantification of events occurring in vivo, in real time. Initially introduced as diagnostic tool, the potential of this method was quickly realised within the pharmaceutical industry. Gamma scintigraphy was first reported for the measurement of transit times in 1966 (gastric emptying) followed swiftly by the assessment of drug product performance in 1976 (capsule disintegration) (4,5).

Visualisation is achieved by the incorporation of short half-life gamma emitting radionuclides, eg technetium-99m (99mTc) and indium-111 (111In). The chosen radionuclide(s) is used to label the drug product or, for pharmacodynamic investigations, the component of interest (eg food or fluid for gastrointestinal transit; inhaled particles for mucociliary clearance). The radiation dose to the subject is minimal – often not exceeding that received from a single X-ray. A gamma camera is used to detect the gamma rays and record these as primary counts which are represented as an image (Figure 1). 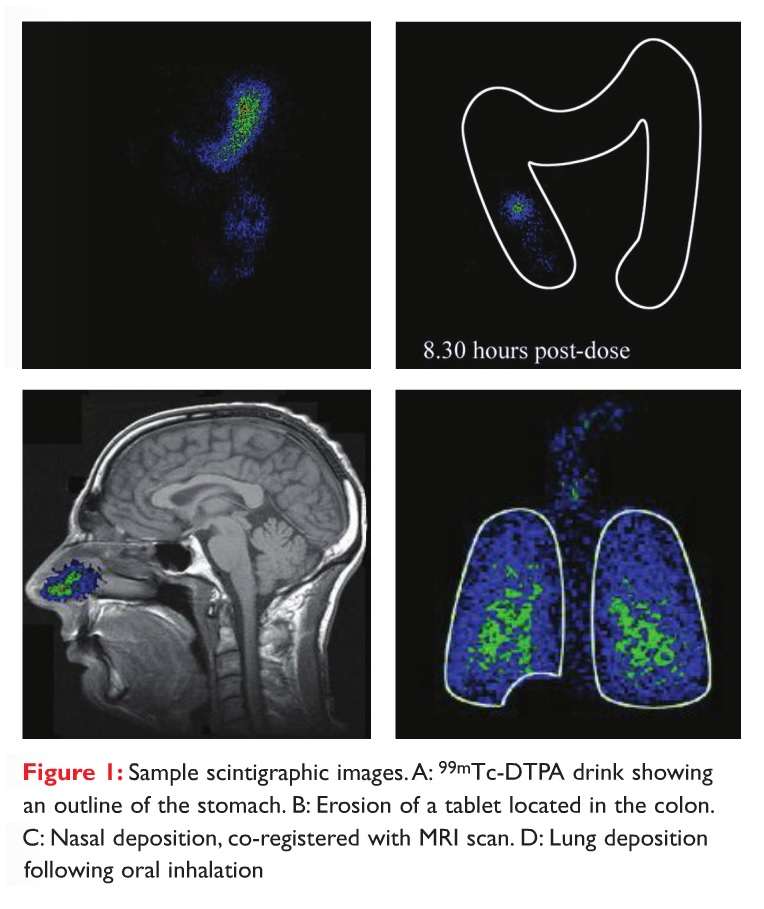 Gamma scintigraphic investigations can be routinely incorporated into standard phase 1/2a studies alongside safety, pharmacokinetic and other biomarker assessments.

The production of an oral product starts in the laboratory, where the pharmaceutical scientist is charged with developing a dosage form which meets a pre-determined specification for drug release. Release rate is measured by recognised methods, for example dissolution testing coupled with HPLC, to generate a profile of drug release versus time. The primary use of these data is for the comparison/differentiation of prototype formulations, and for quality control.

Scintigraphic data provide the missing information, offering real-time visualisation and measurement of in vivo formulation performance. Key data are the rate of erosion of the dosage form – equating to release of drug (Case study 1) (6).

These data correspond to those obtained from in vitro dissolution, and assuming no other rate limiting factors may also parallel the appearance of drug in the systemic circulation (Figure 2). 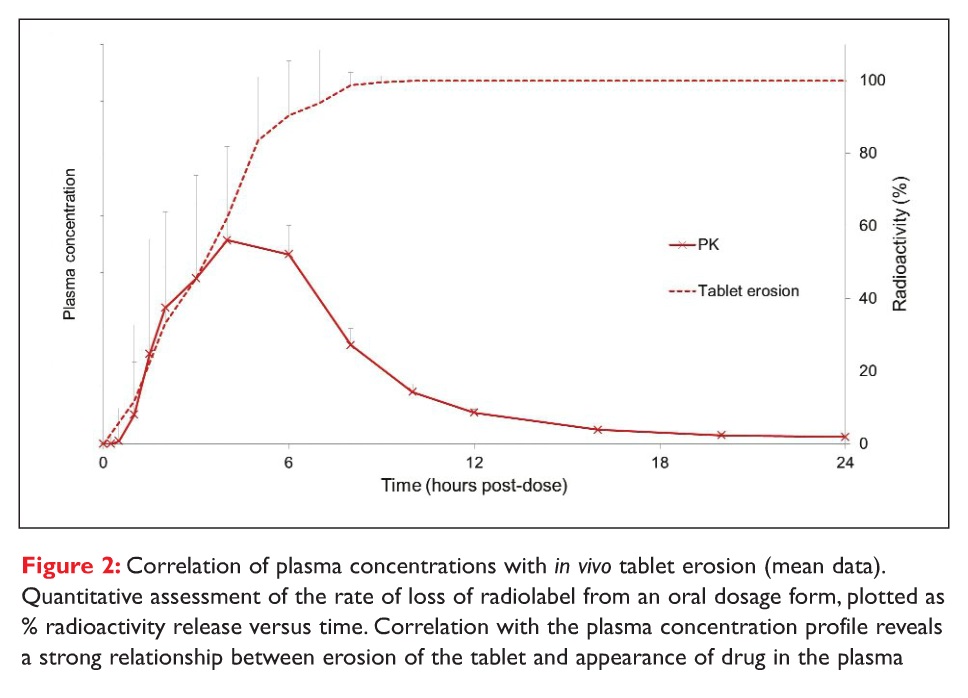 A further level of detail is obtained by tracking the transit of the dosage form through the gastrointestinal tract. How long does a gastroretentive formulation remain in the stomach? To which regions does an extended release formulation deliver? How rapidly does an enteric coated formulation deliver drug after gastric emptying? Does a colon targeting formulation reproducibly deliver to the target site? (7-11).

The success of an orally inhaled product is a combination of the device, the formulation and the patient’s technique (12). As with oral formulations, development starts in the laboratory and the performance of prototypes is measured via particle size distribution (PSD) testing. While attempts continue to use PSD profiles as a predictor of in vivo deposition, the reality is that there is no direct correlation between individual or grouped stages and the anatomy of the lungs (13).

Consequently, while comparable in vitro performance can be used to support claims of equivalence, de novo data cannot be relied upon to predict lung deposition. Products for oral inhalation can be radiolabelled by the addition of a radionuclide (eg 99mTc) to the formulation.

In vitro testing is performed to confirm that the PSD of the radiolabel and the drug matches, ensuring that the deposition pattern of the radiolabel is representative of the drug molecule (14). Scintigraphic data are most commonly used to quantify the initial deposition pattern providing a measure of how efficiently the device delivers the formulation, to which anatomical regions and the extent of lung penetration.

Scintigraphic images co-registered with an MRI scan of the head can be used to quantify the amount of drug formulation delivered to target sites. Specific anatomical regions can be identified, or the cavity can be divided into zones such as upper:lower:inner:outer (16). Further, scintigraphic imaging can provide evidence to support statements to the regulators that nasal delivery results in no deposition to the lungs.

The quantification of the availability of the active moiety at the site of action, ie the measurement of bioavailability, is a fundamental element of pharmaceutical development. For molecules which reach their site of action via the systemic circulation, pharmacokinetic parameters are an accepted surrogate measure and these data underpin the majority of safety, efficacy and bioequivalence assessments. However, for molecules that do not rely on systemic availability, this raft of assessments can be challenging to complete.

Bioavailability may be assessed by ‘measurements intended to reflect the rate and extent to which the API becomes available at the site of action’ (17,18). Traditionally, for locally acting drugs these measurements have been limited to pharmacodynamic assessments, and large clinical trials to confirm efficacy. For locally acting molecules delivered via the oral inhaled route, the use of in vitro assessments and the quantification of lung deposition via imaging are already recognised as supporting data – although pharmacokinetic data are still deemed to be advantageous (19,20).

The regulators now also recognise that the use of comparative clinical trials is inefficient and prohibitively expensive for locally acting molecules delivered to the gastrointestinal tract. As part of the FDA Critical Path Initiative, in vivo imaging has been suggested as a method to directly assess the rate of drug release at the target site (21). Scintigraphic data provides a measure of both the location and rate of drug release, and comparative assessments of innovator versus test product can be performed.

Drug molecules often have an impact on gastrointestinal transit. This may be an unwanted side effect, such as opioid-induced constipation, or a key element of the molecule’s pharmacology, eg 5- HT4 agonists (22,23). This impact can be measured in a variety of ways – from changes in acetaminophen kinetics, to the 13C octanoic acid or hydrogen breath tests, the use of radio-opaque markers and the measurement of pH changes (24-27). However, each of these approaches provides limited insight into the extent of the effect exerted by the drug molecule.

Scintigraphic imaging is a convenient method providing direct, detailed, quantitative assessment of gastrointestinal transit. The radiolabel is administered in food and/or fluid, or as a multi-particulate formulation, which provides a marker for gastrointestinal contents without concomitant administration of calories and induction of the fed state. The method permits a detailed assessment of the effect of a drug molecule on gastric emptying (28).

Solid and liquid phase gastric emptying, which are regulated by different mechanisms and hence can be affected differentially, can be measured concurrently by the simultaneous use of two radionuclides. Detailed analysis of intra-gastric distribution can also be performed.

Similarly, the impact of a drug molecule on colon transit can be a desired pharmacological effect, ie the normalisation of transit times to treat diarrhoea or constipation, or it can be an adverse effect resulting in the generation of these symptoms. The rate of colon transit is measured by a technique termed geometric centre (GC) analysis. The method was first presented in 1986, and has developed since then to offer a non-invasive measure of transit through the colon versus time (29,30) (Figure 3). The data generated are both stable and clinically relevant (31). 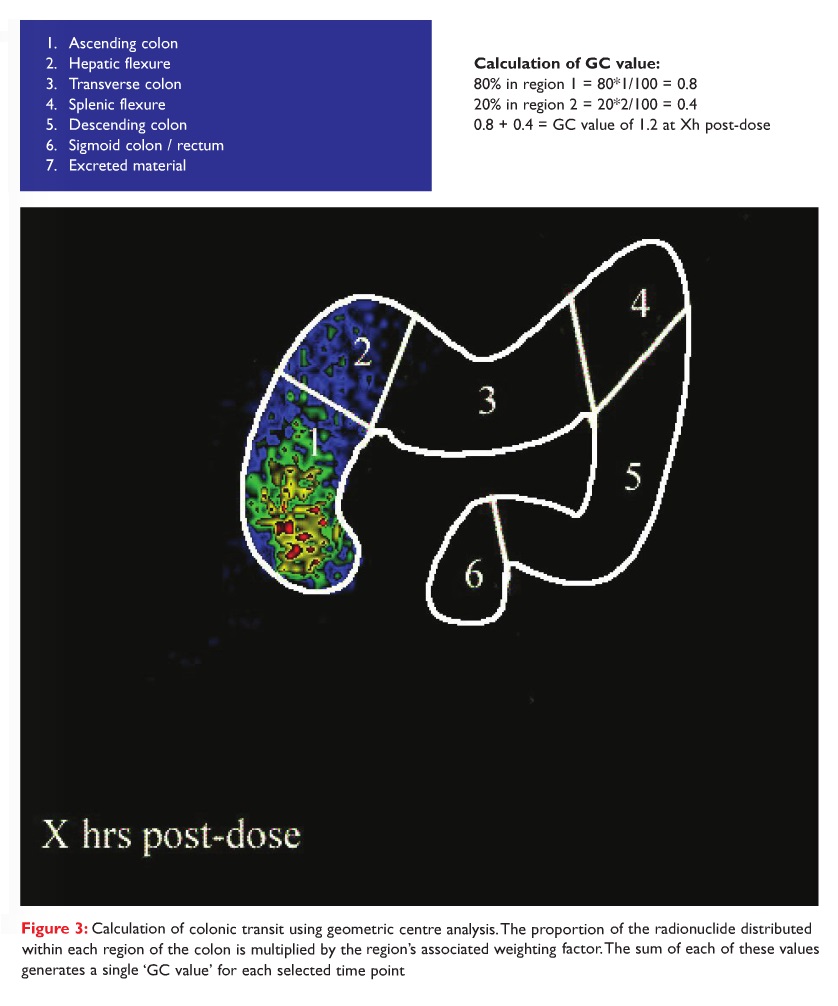 A healthy volunteer model for the assessment of the sub-clinical effect of drug molecules on colon transit is available (Case study 2). Effects on colon transit are observed, following single doses, prior to the onset of any signs or symptoms of disruption of the normal pattern of motility (32-34). This provides the opportunity to assess the effect of new drug products in simple, efficient investigations that can be performed early in the development process.

Mucociliary clearance is the primary physiologic defence mechanism, protecting the lungs from damage caused by inhaled particles and microorganisms. Impairment of mucociliary clearance function plus airway inflammation in conditions such as chronic obstructive pulmonary disease (COPD) and cystic fibrosis (CF) may contribute to the increased morbidity from airway infections that are part of these conditions. Consequently, the quantification of the impact of drug molecules on the rate of mucociliary clearance is a key biomarker for products in development for the treatment of respiratory disease (35).

Scintigraphic assessment of mucociliary clearances enabled by administration to the lungs of radiolabelled non-absorbable particles, including 99mTc labelled sulphur colloid (36,37). Following deposition, the rate of removal of these particles is primarily governed by mucociliary clearance. Sequential scintigraphic images are acquired and the rate of clearance quantified. Results for the test regimen can be compared with baseline, placebo or positive control (eg hypertonic saline) (38). Dose ranging assessments can also be performed (39).

The utilisation of gamma scintigraphic techniques within the pharmaceutical industry is continually progressing, and the latest transition from diagnosis (hepatobiliary disease) into clinical research is the impact of drug molecules on the rate of gallbladder emptying. The drive for this transition was the concern voiced by the FDA of the potential for GLP-1 analogues and agonists to induce acute pancreatitis following post-marketing reports for exenatide (40). This led to the requirement for the assessment of gallbladder emptying for new molecules within this class.

A number of variations of the method are routinely used within a diagnostic setting (41,42). In order to ensure consistent and comparable data, the method was adapted and standardised. Recommended parameters have been published (Figure 4) (43).

Gamma scintigraphy is an in vivo imaging tool with many applications within the pharmaceutical industry. It is recognised as the gold standard technique and is routinely used as the benchmark, which alternative methods have to meet. For drug product development, it is the only direct method of assessment of critical-to-performance parameters which in vitro methods attempt but often fail to predict.

Scintigraphic imaging is a tool that every pharmaceutical scientist and clinical pharmacologist should have access to in order to improve early development productivity.

Dr Alyson Connor gained her PhD in 1998 and has 15 years’ experience in the pharmaceutical industry. For the past 12 years Alyson has fulfilled the role of Senior Research Fellow at Quotient Clinical, a provider of early drug development services. As lead scientist she is responsible for all oral scintigraphic studies performed and is an acknowledged expert in the use of scintigraphy to assess product performance and pharmacodynamic effect. She regularly publishes on this subject.

19 Guideline on the requirement for clinical documentation for orally inhaled products (OIP) including the requirements for demonstration of therapeutic equivalence between two inhaled products for use in the treatment of asthma and chronic obstructive pulmonary disease (COPD). Committee on Medicinal Products for Human Use (CHMP), The European Medicines Agency (EMA). London, 18 October 2007.

43 Connor, A, Collier, J, Rowley, K, Perkins, A. Application of a diagnostic technique for assessment of the effect of GLP-1 analogues / agonists on gallbladder emptying. Poster presentation ASCPT 2011.