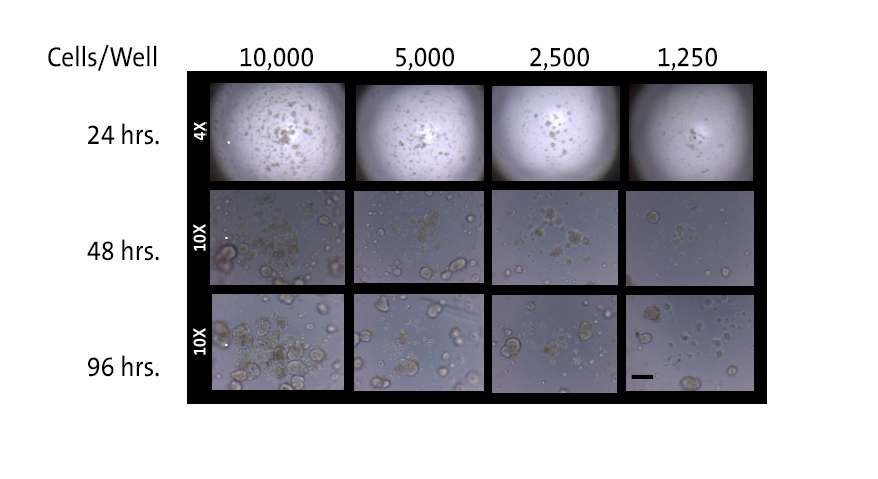 Pancreatic cancer is among the most lethal forms of metastasis and the large majority of these are exocrine in nature. Pancreatic ductal adenocarcinoma (PDAC), an exocrine neoplasm, is the most common and aggressive form of this disease. Lack of effective treatment options is one of the many contributors to mortality. To study PDACs, human tumour tissue grown in 2D culture conditions does not support growth of non-transformed cells. Therefore, 3D models are being explored such as neoplastic pancreatic organoids that better mimic in vivo physiology and are thought to be better predictors for compound profiling. Corning® Matrigel® matrix has been the gold standard for organoid cultures providing the necessary physiological milieu to support these 3D structures. Here, we evaluated growth of human pancreatic ductal tumour organoids using Corning Matrigel matrix-3D plates. We found that these pre-coated, high throughput formats were convenient and easy to use as Matrigel matrix was already pre-dispensed into each well. The Matrigel matrix-3D plates are potential tools for drug discovery efforts using organoids as demonstrated by the ability to support human pancreatic organoid cultures.

Human pancreatic ductal adenocarcinoma organoids (hT3) were generated from tissues of pancreatic cancer patients in the laboratory of Dr. Tuveson, M.D.1 The Tuveson lab has established a solid platform to generate organoid models from normal and neoplastic murine and human pancreas tissues2. The pancreatic organoids can be rapidly generated from resected tumours and biopsies, surviving the cryopreservation process and exhibiting ductal- and disease stage-specific characteristics1,2. This specific organoid line, hT3 has always been maintained in 3D cell culture conditions and never manipulated using 2D methods.

To test the Matrigel matrix-3D plates (Corning 356256) a cell titration was performed using disaggregated hT3 organoids and seeded at different cell densities (0 to 10,000 cells/well) following manufacturer’s instructions for the ‘overlay’ method, with minor modifications. The experiments were conducted using seven replicates per each condition for a period of five days of total incubation. The 3D organoids were monitored using bright-field microscopy to visualise the formation of spheres over time. The Matrigel matrix-3D plates used were a 384-well, black/clear square bottom format pre-coated with Matrigel matrix in each well. The plates were incubated prior to seeding the cells to polymerise the Matrigel matrix.

Shown in the table is an outline of the protocol that was followed. 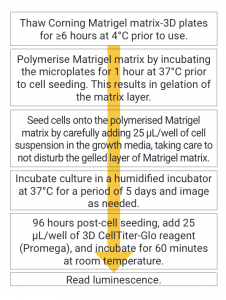 We observed human pancreatic organoids (hT3) formation within 48 hours of plating using standard bright-field microscopy with 4X and 10X objectives as shown in Figure 1. It also appears that the number of organoids per well was proportional to initial cell seeding density

We thank Hervé Tiriac at UCSD Moores Cancer Center and David Tuveson at Cold Spring Harbor Laboratory for providing the organoids and the conditioned media to grow the organoids.