Immunotherapy – Knocking Out Cancer With a One-Two Punch 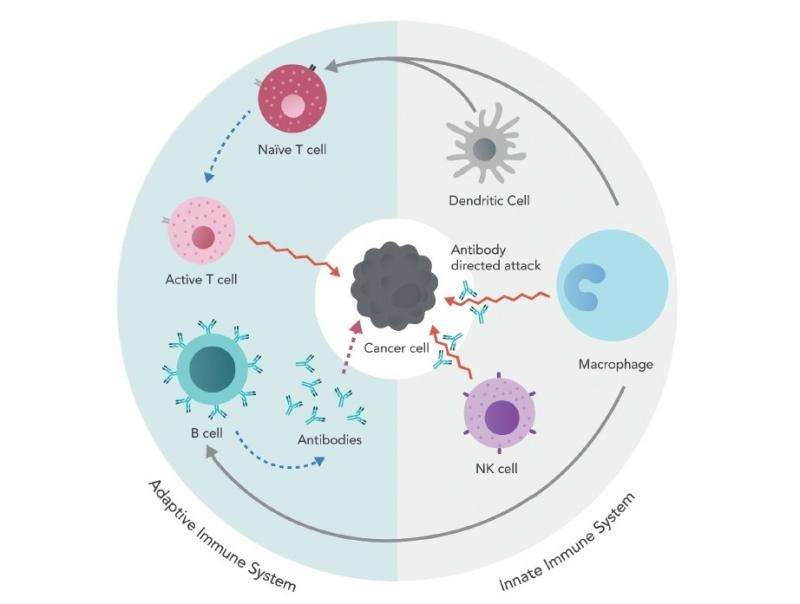 New immunotherapies that integrate innate and adaptive immune responses may increase efficacy against many cancers, and have the potential to expand the range of tumours and patients that can be treated with immunotherapy.

Over the past decade, insights into the molecular mechanisms that cancer cells use to evade T-cells, antibodies/B cells and other adaptive immune defences have revolutionised oncology therapies. New understandings of how cancer evades innate immune defences – including macrophages, dendritic cells (DC) and Natural Killer (NK) cells – suggest a second, and perhaps even more significant, immunotherapy revolution may be at hand.

Recent preclinical and early clinical studies demonstrate that targeting molecular mechanisms that many cancer cells use to block macrophages and other innate immune cells from attacking may be effective against a wide range of cancers. Moreover, research suggests that therapies, which mobilise innate and adaptive immune responses, may be more effective when combined rather than used separately.

It is as though we have been fighting cancer with one hand tied behind our backs. Much as in boxing, where quick left-hand jabs open space for a decisive right-cross knockout, these studies suggest that a treatment plan that combines the two halves of the immune system work better than they do individually.

The opportunities for addressing unmet patient needs are profound, as are the commercial prospects for pioneers exploring this new immunotherapy frontier.

The first wave of immunotherapies developed to treat cancer were monoclonal antibodies. These antibodies bind to antigens on the surface of tumour cells, such as HER2 on breast cancer, therefore inhibiting receptor signalling and marking cancer cells to be destroyed by the innate immune system. However, antibody therapy only works against cancers that display specific antigens, limiting their effectiveness.

The second wave of immunotherapies were T-cell checkpoint inhibitors that bind to molecules, such as PD-L1, and are responsible for creating an immunosuppressive microenvironment in tumours. Inhibiting these effects restores the responsiveness of tumours to T-cells. In doing so, T-cell checkpoint inhibitors can induce long-term responses in some patients with difficult-to-treat cancers, including melanoma, bladder cancer and nonsmall cell lung cancer.

We are now in the third wave of immunotherapies, where treatments in development seek to integrate the innate and adaptive immune systems. Research shows that macrophages and other cells of the innate immune system help fight cancer in two major ways – and both potentially broaden and strengthen the body’s overall anti-cancer immune response.

Evidence suggests combining innate immune modulators with established adaptive immunotherapies, such as tumour-targeted antibodies and T-cell checkpoint inhibitors, enhances the activity and longevity of treatments and may expand the population of patients who respond to immunotherapy (Figure 1). 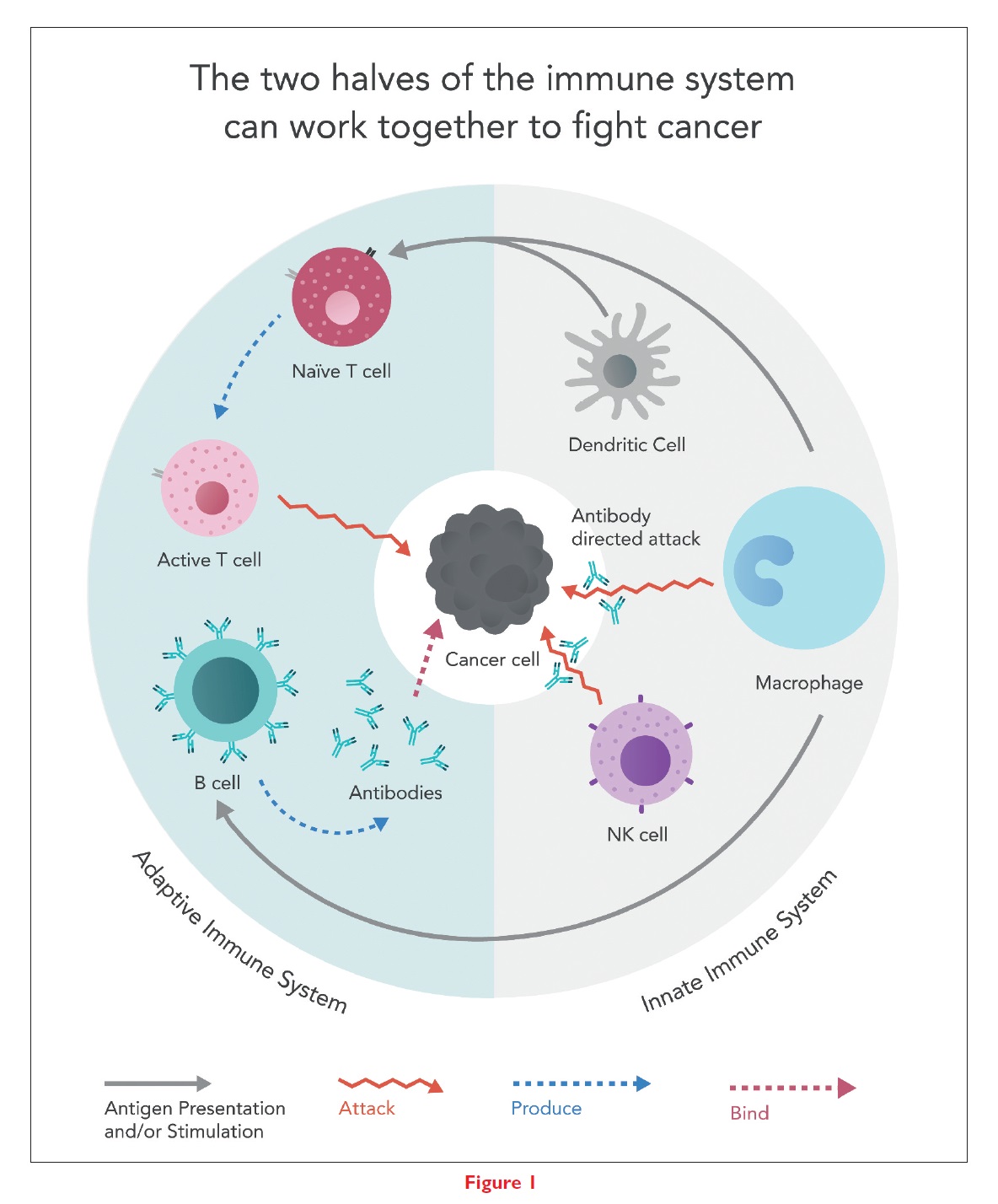 As our understanding of the innate immune system catches up with our knowledge of adaptive immune responses – and how the two work together – several modulators of the innate immune system are being advanced. These include toll-like receptor (TLR) agonists, which can activate innate immune cells, therefore causing them to secrete cytokines and interferons and, subsequently, recruit and activate adaptive T- and B-cells. However, such agents tend to be toxic when given systemically. Currently, TLR agonists are delivered locally via intratumoral injection and other strategies to target them specifically to tumours are being explored.

However, many cancers, both solid and hematological, over-express CD47. This prevents macrophages from attacking cancer cells, even though they also display several surface proteins indicating distress. It is as though the overexpressed CD47 acts as a bright light, blinding the macrophage to the presence of ‘eat me’ distress signals.

Blocking CD47 on cancer cells with monoclonal antibodies allows macrophages to respond normally to the ‘eat me’ proteins that are also present on cancer cells, triggering phagocytosis. This process can be enhanced by supplying an additional ‘eat me’ signal through a tumour-targeted antibody such as rituximab. In addition to directly destroying cells by phagocytosis, macrophages and dendritic cells then present peptide antigens from the digested cancer cells to the adaptive immune system, activating T-cells against these tumour-specific antigens wherever they may be found in the body (Figure 2). 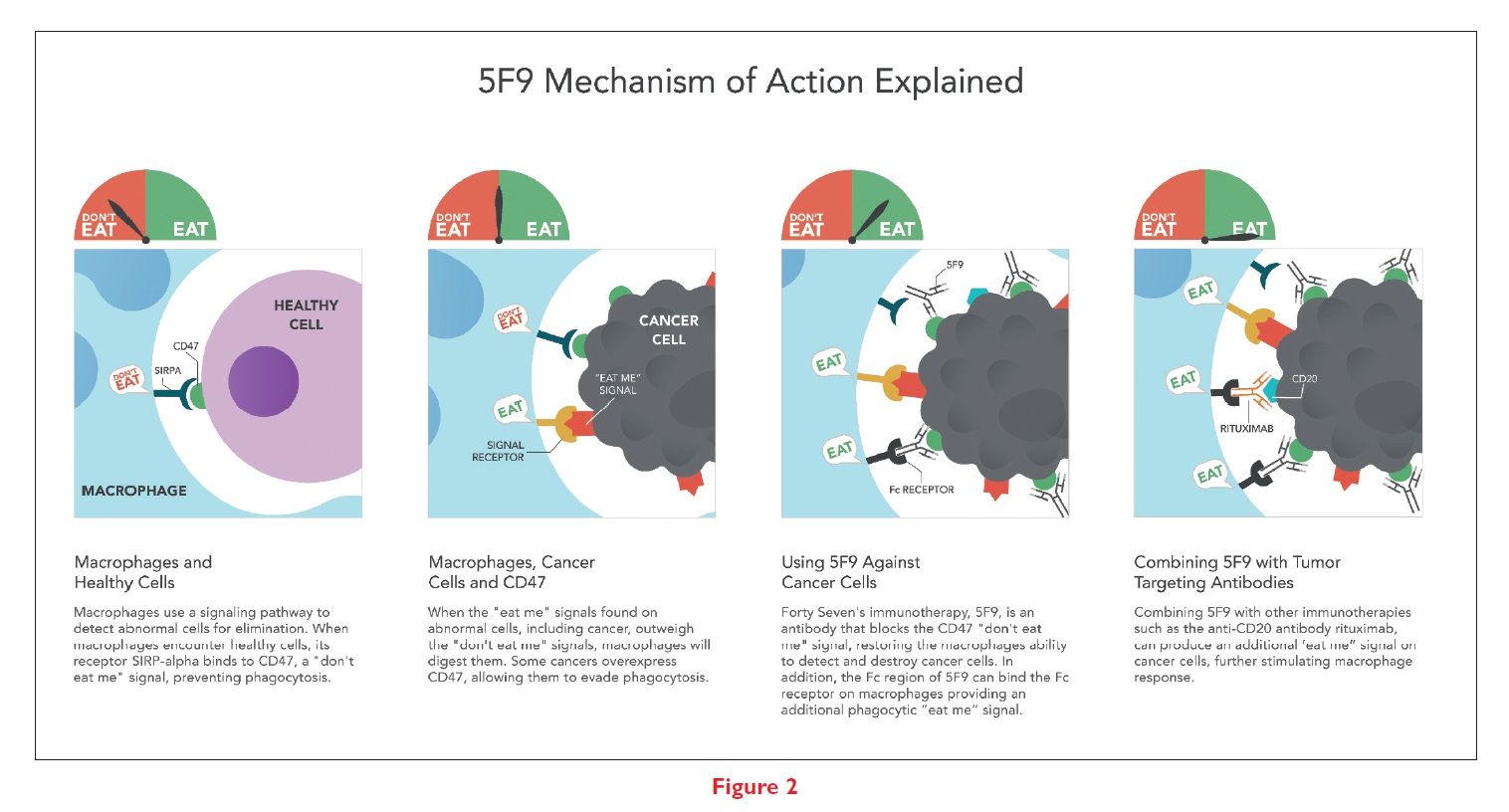 Below we review current research and present a preliminary pro forma analysis of the therapeutic and market potential of such a combined innate-adaptive immunotherapy approach, which has the potential to enhance therapy efficacy and efficiency, while reducing overall development costs.

Research shows that many, if not most, cancer cells employ CD47 to conceal themselves from macrophages. The two classes of innate checkpoint inhibitors in clinical trials are IgG4 monoclonal antibodies targeting CD47, and SIRPα-Fc fusion proteins, which also bind to CD47 on body cells. Since 2014, six developers have initiated 14 clinical studies, including eight Phase I and two Phase II studies testing CD47 antibodies, and four Phase I trials testing SIRPα fusion proteins.

Preclinical and early clinical studies have demonstrated the efficacy of CD47 antibodies against a range of cancers as a monotherapy and combined with adaptive immune therapies.

The first and most advanced is Hu5F9-G4 (5F9), which was engineered with a human IgG4 Fc domain isotype. In addition to blocking the CD47 ‘don’t eat me’ signal, the IgG4 Fc domain provides an additional ‘eat me’ signal via interacting with the Fc receptor on macrophages and facilitates phagocytosis of cancer and other abnormal cells. Yet, the IgG4 Fc domain has minimal affinity for NK cells and does not mediate complement dependent cytotoxicity. This is critical because antibodies with other Fc domain isotypes, such as IgG1, can stimulate innate immune attacks against normal tissues that also express CD47.

5F9 clinical trials beginning in 2014 showed the treatment was well-tolerated, with manageable and mostly minor side-effects and initial efficacy against AML and solid tumours, without reaching a maximum tolerated dose up to 45mg/kg (5-7).

The main challenge with IgG4 CD47 antibody therapies include its effect on red blood cells, sometimes causing transient anaemia. Some programmes have managed this anaemia using a priming dose strategy that culls older red blood cells and stimulates production of additional red blood cells before initiating full-strength therapy (12). One advantage to these therapies is the limited sideeffect profile at high doses because they generally do not attack healthy host cells.

Currently there are three SIRPα-Fc fusion proteins in clinical trials:

The first, TTI-621, combines a wild-type human SIRPα that binds to CD47 with an active IgG1 Fc domain, which presents a potent phagocytotic signal to effector cells. Preclinical trials demonstrated how TTI-621 stimulated macrophages to attack tumour cells preferentially to normal cells and slowed growth of AML and lymphoma xenografts. TTI-621 does not bind to red blood cells, though it does attach to leukocytes and platelets (13). In Phase I trials that began in 2016, TTI-621 has been proven effective as a monotherapy and when combined with rituximab in treating diffuse large B-cell lymphoma (14). However, toxicity limited escalation of the dose in humans above 0.3mg/kg. Further investigation of TTI-621 is now focused on local delivery by direct intra-tumoral injection (15).

The second, TTI-622, combines a wild-type human SIRPα to a IgG4 Fc domain, avoiding normal tissue toxicities associated with IgG1. A Phase I dose escalation trial of TTI-622 is under way in patients with advanced relapsed or refractory lymphoma or myeloma with plans to expand into combination treatments with rituximab, anti-PD-1 antibodies and proteasome inhibitors (NCT03530683).

The final one, ALX148, is a fusion protein made up of 1) an engineered SIRPα domain with more than a 7,000-fold greater affinity for human CD47 than wild-type SIRP and 2) an inactive IgG1 Fc domain. In preclinical trials, given the inactive Fc domain, it did not cause anaemia and displayed modest activity as monotherapy. But it was broadly active in xenograft models in combination with tumour-targeting antibodies, such as obinutuzumab, trastuzumab, cetuximab and anti-PD-L1 antibodies that provide an additional ‘eat me’ signal (16). Clinical trials, in combination with pembrolizumab, trastuzumab and rituximab, are ongoing in advanced solid tumour and lymphoma patients (17).

Down for the count: a preliminary proforma analysis

The therapeutic and market potential for combining innate and adaptive immunotherapies are immense and have the potential not only to expand the range of patients who can benefit from immunotherapy, but also to distinguish immunotherapy pharmaceutical companies from the rest of the competition.

Considering that about 70,000 new cases of Bcell NHL are diagnosed annually in the US, it has been estimated that there are approximately 11,500 DLBCL and FL patients that have received three or more previous treatments and are in grave need of new therapies (18,19). At an average annual cost of $150,000 for an effective immunotherapy, such as a PD-1 or PD-L1 inhibitor, that translates to a revenue potential of nearly $1.8 billion for a salvage therapy in DLBCL and FL alone.

It might be well worth the effort. And that is not even considering all the other indications a combined innate-immune therapy might generate. Using this approach could be applied to preclinical evidence in infectious diseases, cardiovascular diseases and fibrotic diseases.

In addition, companies can further differentiate themselves from competitors in the market by adding a combination therapy approach to their portfolios.

Indeed, a future where we could significantly increase the chances of a complete response in patients across indications could considerably boost the value of combined innate-adaptive therapies. In fact, the chances of a complete response could increase so much that restoring the one-two punch of the innate and adaptive immune systems could become the standard of care for new cancer therapies, which raises the question: Can you afford NOT to include innate immune-boosting therapies as part of your oncology development programme? A recent Nature publication indicates that in September 2018, there were 2,250 clinical trials on-going with T-cell checkpoint inhibitors (20). Is it time to deploy those resources more broadly? DDW

This article originally featured in the DDW Spring 2019 Issue

Dr Mark Chao, Co-founder of Forty Seven and Vice-President of Clinical Development, plays a leading role in the management of the company’s clinical trials and clinical development strategy. Mark completed his MD, PhD in cancer biology and hematology fellowship at Stanford University.

Dr Ranjana H. Advani, Saul Rosenberg Professor of Lymphoma and Physician Leader of the Lymphoma Clinical Care Program at Stanford University, specialises in research and treatment of Hodgkin and non-Hodgkin. She completed her medical education at Bombay University in India and residency and fellowship at Stanford.