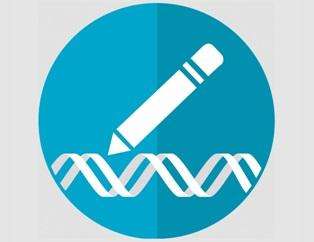 Research in drug discovery and biotechnology increasingly exploits gene editing at industrial scale in order to identify and validate new biological targets for precision medicines. The discovery of CRISPR-Cas9 systems has fuelled a rapid expansion of gene editing adoption with particular interest in the increasingly prevalent area of functional genomic screening.

As these technologies have matured and evolved, so have the applications to which they are deployed. While early efforts were heavily enriched for studies in cancer biology, the advent of more complex phenotypic analyses, coupled to CRISPR-based discovery efforts, have substantially broadened the impact of these tools to provide discovery opportunities in myriad disease areas with greater power for hit ID and fewer off-target effects than other screening tools.

Broadly speaking, functional genomic screening requires three elements: an ability to perturb gene function, an assay by which to measure phenotypic response and a mechanism to couple these two observations together (see Figure 1) (1).

In the case of CRISPR, the most common perturbations are provided by the canonical knockout based approach (CRISPRko) or by transcriptional control using the catalytically-inactivated and repurposed CRISPR modalities of CRISRPi (interference) and CRISPRa (activation). For gene knock-outs, the benefits are in the high penetrance of the perturbation, where the frequency of homozygous deletion can drive the response close to maximum in the cell system and allows excellent reproducibility between samples and replicates.

Recent observations have indicated that some model systems might be unduly influenced by gene copy-number artefacts with this approach (2), but while this might be a concern for some cancer target ID applications, it is likely that in many cases the benefits of the clean and robust CRISPRko gene editing tool outweighs this consideration.

CRISPRi and CRISPRa provide both orthologous and complementary tools for discovery, augmenting a researcher’s ability to find, validate and exploit novel hits and elucidate new biological understanding. Inspired by modified versions of both ZnF and TALE nucleases (3), these tools utilise a nuclease-dead version of Cas9 (dCas9) which in CRISPRi, rather than mutating specific genomic loci, allows disruption of gene transcription simply by the binding of proximal sequences at the promoter region of the gene (4-8).

Effective gene activation with CRISPRa has been accomplished by several approaches: the SunTag array, which uses multiple VP64s recruited on to a peptide array (14); VPR, a synergistic tripartite activation method using a fusion of VP64, p65 and Rta (15); and the Synergistic Activation Mediator complex (SAM) (16), which uses a dCas9-VP64 and recruitment of p65 and HSF1 via RNA binding protein components. These adapted CRISPR tools provide clear new opportunities to study gain-offunction mutations in genome-wide screens (16,17).

Selecting the right assay is crucial for functional genomic screening success, and the biology to be measured influences key aspects of screen design. For example, in cancer biology it is often sufficient to evaluate the survival of a given cancer cell line model in order to robustly predict the response of the disease state.

This can be done either in vitro or in vivo, but a simple measure of cell health is often not sufficient to evaluate more complex diseases or present a complete picture of cell behaviour for high fidelity target ID. This is where phenotypic approaches with higher resolution yield substantial benefits, notwithstanding that cell health is itself a valuable phenotype for predictive biology.

To date, most CRISPR-based functional genomic screens have been conducted in a pooled format. This approach uses a viral-based system to tag the edited cells with a unique barcode, delineating their edited genotype. The identifying sequences can then be identified by amplicon deep sequencing, which in turn provides quantitative data about genotype abundance to inform biological interpretations.

This technique, initially developed for shRNA screening, was rapidly adopted for CRISPR approaches (18-20), and provides an immensely powerful dataset. Variable abundance of genotypes in differently-treated samples can be used to explore cell health in the context of drug responses for chemotherapeutic agents or to investigate genetic interactions between panels of cells of different origin. This latter example can be applied to explore genetic disease, from the very rare to the more common and provides a powerful way to identify novel targets for drug discovery (21,22).

Crucial to these studies is the availability of cell models which represent both healthy cells and disease cells – isogenic cancer cell lines, iPSC-derived physiological models and even primary cells can be paired up and evaluated for selective responses and to find synthetic lethal targets, genes which interfere with the disease cell survival but do not affect the healthy cells, for drug discovery.

But what if the disease state of the cell model is not marked by a difference in cell health? Pooled screening can also be adapted for more complex phenotypic readouts. The simplest example of this approach is the use of high-throughput fluorescence- activated cell sorting (FACS) to determine cell phenotypes based on a biomarker signal (see Figure 2).

Success with this approach is governed in part by the availability of suitable tools (antibodies, reporter cell lines) but the applications can be highly diverse. A recent study exemplified the use of this approach to study ATP dynamics, revealing new targets and pathways which influence the pathophysiology of energy deficiency in neurodegenerative disease and even ageing (23).

The approach can even be extended to monitor secreted biomarkers or intracellular events by using permeabilisation and secretory pathway blocking reagents such as brefeldin A. In these experiments, the biomarker (ie a cytokine) is locked in the cell shortly before the sample collection point (24).

The resulting accumulation of the biomarker in the cell is then read out directly, for example by antibody staining, and cells can be sorted by FACS. Barcodes corresponding to the sorting of populations differentially expressing the biomarker can be captured and sequenced.

Perturb-seq, CRISP-seq and CROP-seq provide methods that enable researchers to directly link individual CRISPR-imposed genetic perturbations to a highly complex gene expression profile at the single cell level. Comparing the transcriptomes of many cells in parallel enables the comprehensive assessment of subpopulations within a heterogeneous group of cells and can provide mechanistic information on which genetic perturbations influence the phenotypes measured.

These techniques even further expand the potential impact of CRISPR-based screens to a level where one can be unbiased in the scope of the phenotype evaluated as a consequence of each perturbation, creating the opportunity to study highly-complex diseases and exploit the benefits of pooled CRISPR screening analysis.

An important distinction of CRISPRko/a to RNAi, however, is that cells also require Cas9 (or dCas9) present in the cells, adding an extra element to the screening procedure. This can be achieved by generating a stable cell line with Cas9 using a lentivirus prior to screening, or by transient introduction of either Cas9 plasmid, mRNA or protein to the cells (see Figure 3). 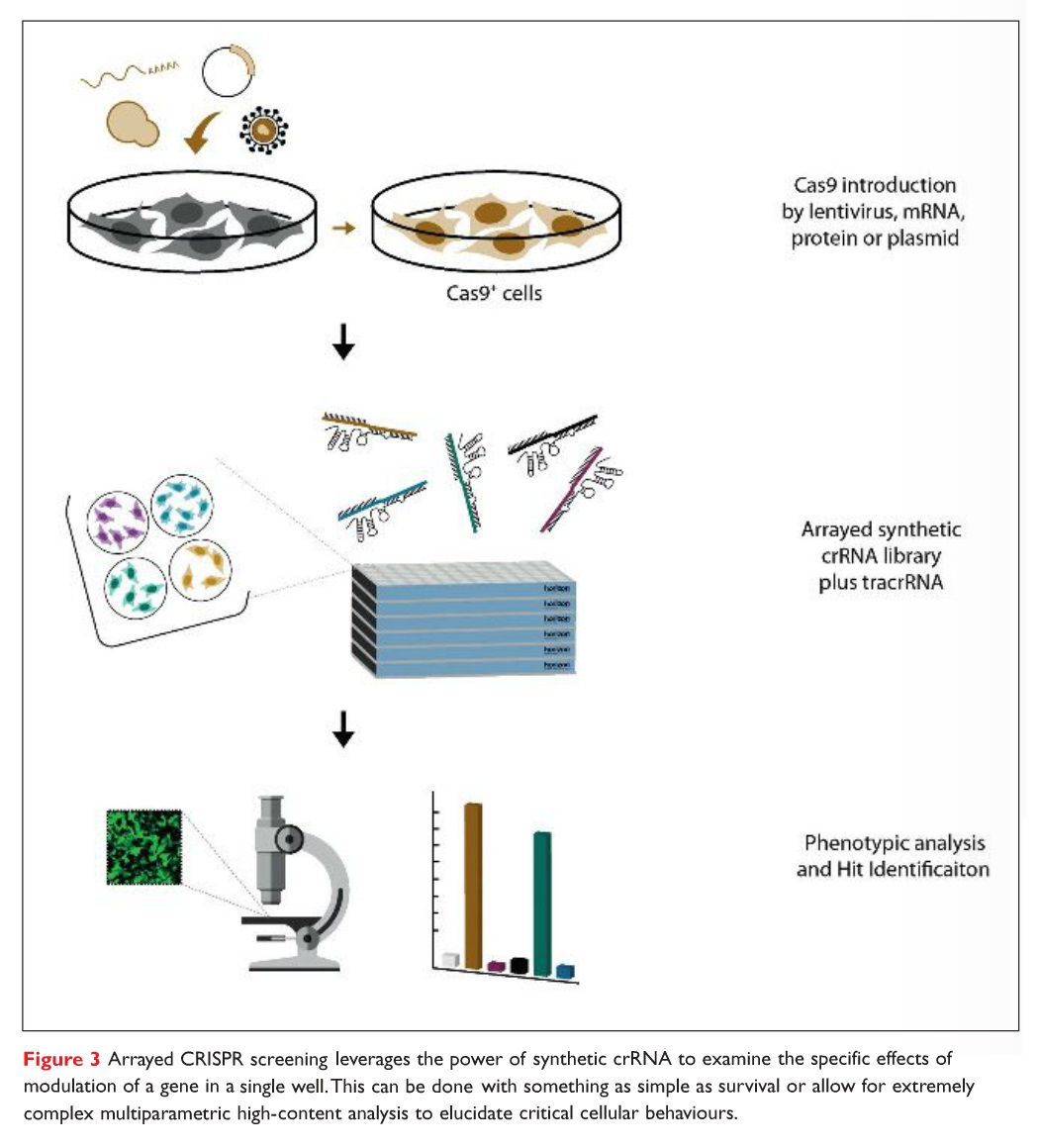 Multiparametric screening can be a powerful application of arrayed screening, and since the pooled approach is less compatible with multiplexed readouts, this can be a valuable tool for researchers seeking complex phenotypic data from their screen. For instance, one study evaluated the impact of gene knock-out on cell cycle progression through the use of synthetic CRISPRko reagents. The researchers used a high-content microscopy readout to classify cell cycle state coupled to a novel analytical process to assimilate parameters for robust hit ID (29).

The arrayed screening approach can even be extended to evaluate cell responses to gene modulations in difficult-to-edit model systems, such as primary T cells (30). This highly impressive approach not only demonstrates the value of arrayed screening platform data, but also brings the technology to T-cells which have proven challenging to interrogate by established CRISPR screening techniques.

CRISPR has undoubtedly provided researchers with augmented tools for functional genomics, and with the continued implementation of new adaptations and innovations it is an exciting time to be a gene editing scientist. The coupling of phenotypic analysis to CRISPR-based screening has added promising value to the applications of these technologies to more complex disease areas.

In an age of personalised medicine, functional genomics is key and creativity, expertise and pragmatism in screening are crucial if these tools are to yield benefits for patient outcomes. DDW

This article originally featured in the DDW Fall 2018 Issue

Dr Steffen Lawo is a Team Leader in Functional Genomic Screening at Horizon Discovery. At Horizon, Steffen led the development and implementation of pooled CRISPRko screening and the establishment of this platform at Horizon. He has specific expertise in pooled and arrayed CRISPR and RNAi screening campaigns with complex, high-content phenotypic readouts. Before joining Horizon, Steffen earned his PhD in Molecular Genetics at the University of Toronto.

Dr Carlos le Sage is a Team Leader in Functional Genomic Screening at Horizon Discovery. At Horizon, Carlos focuses on discovering the mechanism of action of newly-developed drugs and defining new synthetic lethal interactions in defined mutant-driven cancer genomes, through unbiased genetic perturbation screens. Prior to joining Horizon Discovery, Carlos completed postdoctoral research with Steve Jackson at the Gurdon Institute in Cambridge. He holds a PhD in Biology from the Netherlands Cancer Institute through Leiden University.

3 Beerli, RR et al, 1998. Toward controlling gene expression at will: specific regulation of the erbB-2/HER-2 promoter by using polydactyl zinc finger proteins constructed from modular building blocks. Proceedings of the National Academy of Sciences of the United States of America, 95(25), pp.14628-33.