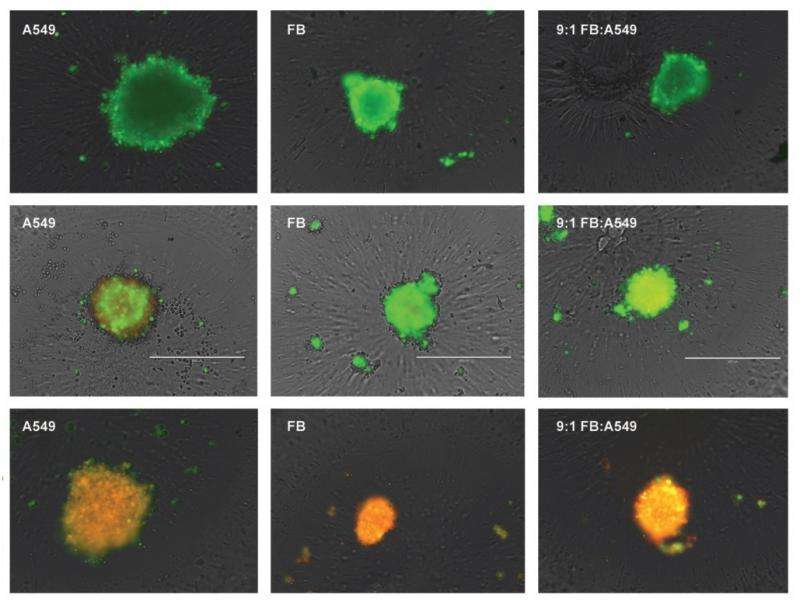 In this article, we describe applications of high-throughput screening using 3D cell culture to assess cell viability. In addition, we highlight the importance of including multiple cell types in 3D assays to more accurately assess potency of chemotherapeutic drug candidates.

The cost of drug development is becoming unsustainable, partly due to the high attrition rate of drugs in clinical trials. The predominant reasons for drug failure are lack of efficacy, poor pharmacokinetics and adverse toxic side-effects not identified during preclinical studies.

These challenges of optimising drug discovery mandate a need for improved preclinical models – specifically those that better recapitulate the pathophysiology of the underlying disease, as well as more accurately predict in vivo responses to therapeutic compounds.

Two-dimensional (2D) cell culture models are frequently used in drug discovery due to their ease of use and established compatibility with high-throughput screening automation and detection instrumentation. While 2D cell cultures are widely used in drug research, it is clear that they exhibit different structural and functional properties than observed in the body.

Therefore, three-dimensional (3D) spheroid cell culture models that closely mimic in vivo conditions are gaining acceptance, thus bridging the gap between in vitro studies and predictive activity in the clinic.

Cellular spheroids are 3D models generated from many cell types; spheroids form because of the tendency of adherent cells to aggregate. Common examples of spheroids include embryoid bodies, mammospheres, tumour spheroids, hepatospheres and neurospheres.

Furthermore, adherent cells naturally aggregate and form spheroids, particularly under circumstances that impede adhesion to cell culture substrates. Common matrix-free methods employed for generating spheroids include the use of attachment-resistant cell culture surfaces or by maintaining the cells as suspension cultures in media (eg hanging drop technology, rotary cultures and bioreactors). Several cell types also form spheroids when grown in hydrogels and, to a lesser extent, in solid scaffolds, depending on the structural and physical properties of the material.

Spheroids mimic various aspects of solid tissues and possess inherent gradients for optimal diffusion of oxygen and glucose, for example, as well as the removal of metabolic wastes. These cellular aggregates can emulate avascular, solid tumour behaviour more effectively than standard 2D environments because spheroids, much like tumours, contain a heterogeneous population. These can comprise surface-exposed and deeply-buried cells, proliferating and non-proliferating cells, as well as highly-oxygenated and hypoxic cells.

Despite the advantages of spheroid culture, nonetheless, limitations of current technologies to enable simple and reliable assays have impeded the rapid adoption of 3D models for high-throughput screening (HTS). Indeed, conventional methods for 3D cell culture are time-consuming, display increased variability and lack the throughput required for automated HTS.

Co-culture with cells of the microenvironment

Understanding the complex interactions between cancer cells and other cell types in the tumour microenvironment, such as fibroblasts, endothelial cells and immune cells, is critical to predict therapeutic efficacy. This is important as many factors, including the secretion of cytokines and extracellular matrices, may impact drug resistance and sensitisation (1-3).

3D cultures develop hypoxic cores and demonstrate gradients of various soluble factors and a diffusion profile for drugs similar to tumours. As shown in the following studies, the presence of primary cell types, as well as endothelial cells together with tumour cells, in a spheroid can affect the potency of chemotherapeutic compounds.

A549 cells, a human lung carcinoma cell line, were cultured in Corning spheroid microplates with and without co-culture conditions, including primary human lung fibroblasts (FB) and peripheral blood mononuclear cells (PBMC). Tumour spheroid viability was screened after treatment with various chemotherapeutics in both single culture and co-culture conditions. Dose-dependent responses of selected chemotherapeutics were compared, demonstrating the impact that including multiple cell types in 3D assays can have on experimental results.

Confluent cells were harvested and seeded into 384-well spheroid microplates (Corning Cat. No. 3830), adding 20μL of FB media with 2,000 cells per well. For chemotherapeutic dose response assays, A549 cells and FB were seeded at 2,000 cells per well in monoculture and in co-culture conditions with a 9:1 ratio of FB to A549 cells.

Spheroid microplates were covered with breathable membrane sealing tape (Corning Cat. No. 3345) and pulse centrifuged at 130 x g prior to culture in a humidified 37°C, 5% CO2 incubator for 48 hours. For tri-culture conditions, PBMC (AllCells Cat. No. PB003F) were thawed into IMDM (Corning Cat. No. 10- 016-CM) with 10% FBS, centrifuged at 200 x g for 15 minutes, and resuspended in FB media. 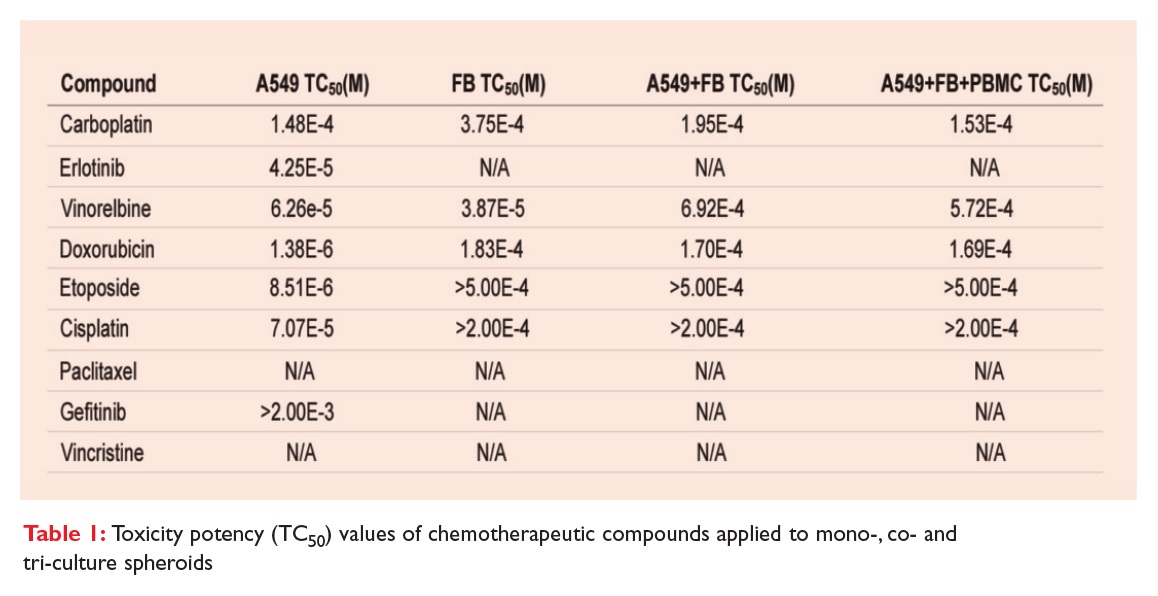 Immediately following media or PBMC addition, 10μL per well of compounds in FB media with 10% DMSO were added and mixed twice using a CyBi®-Well Pipettor. Vehicle control consisted of 10μL of FB media with 10% DMSO. Spheroids were cultured for an additional 48 hours prior to cell viability assays. For each compound, this was performed in triplicate two independent times.

For cell viability assays, spheroids were assayed in the spheroid microplate using CellTiter-Glo® 3D (Promega Cat. No. G9683). 40μL per well of CellTiter-Glo 3D reagent was added directly to the spheroid microplates 48 hours after compound addition. Microplates were shaken for five minutes and then incubated for 25 minutes at room temperature. Luminescence was measured using a Tecan Infinite® M1000 plate reader.

The concentration at which half of the cells were no longer viable, as measured by comparing luminescence to vehicle control wells, was calculated as toxicity potency (TC50) for each compound.

A549 cells and FB can be incorporated into coculture spheroids using different seeding ratios. To determine the optimal cell seeding ratio for a chemotherapeutic screen, co-culture spheroids were formed using FB to A549 cell ratios of 9:1, 8:2, and 1:1. After 48 hours in culture, a dose series of the chemotherapeutic agents doxorubicin and paclitaxel were added, and the spheroids were cultured for an additional 48 hours. 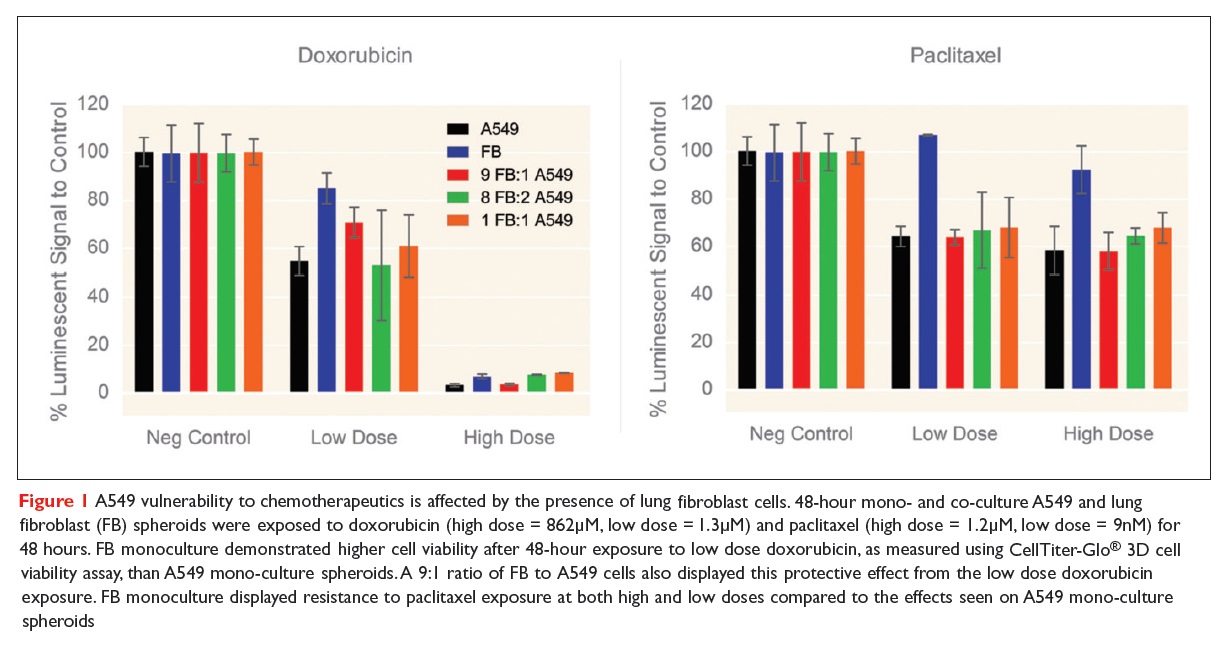 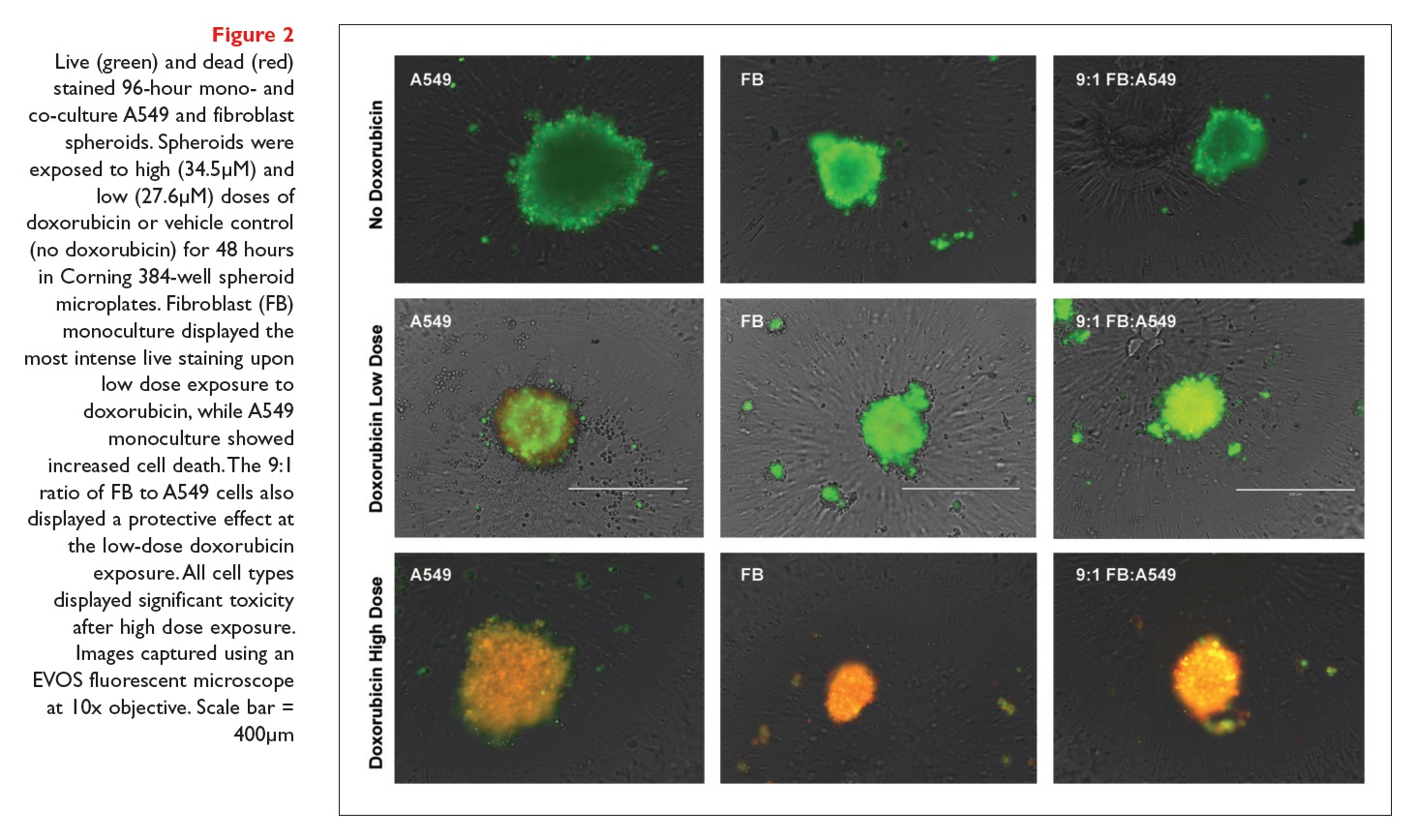 Dose series of several chemotherapeutic compounds were applied to mono-, co- and tri-culture spheroids after 48 hours of culture in the spheroid microplate. Cell viability was assessed using CellTiter-Glo 3D cell viability assay and the luminescent signal from samples were plotted as percent compared to vehicle control to generate dose response curves (Figure 3). 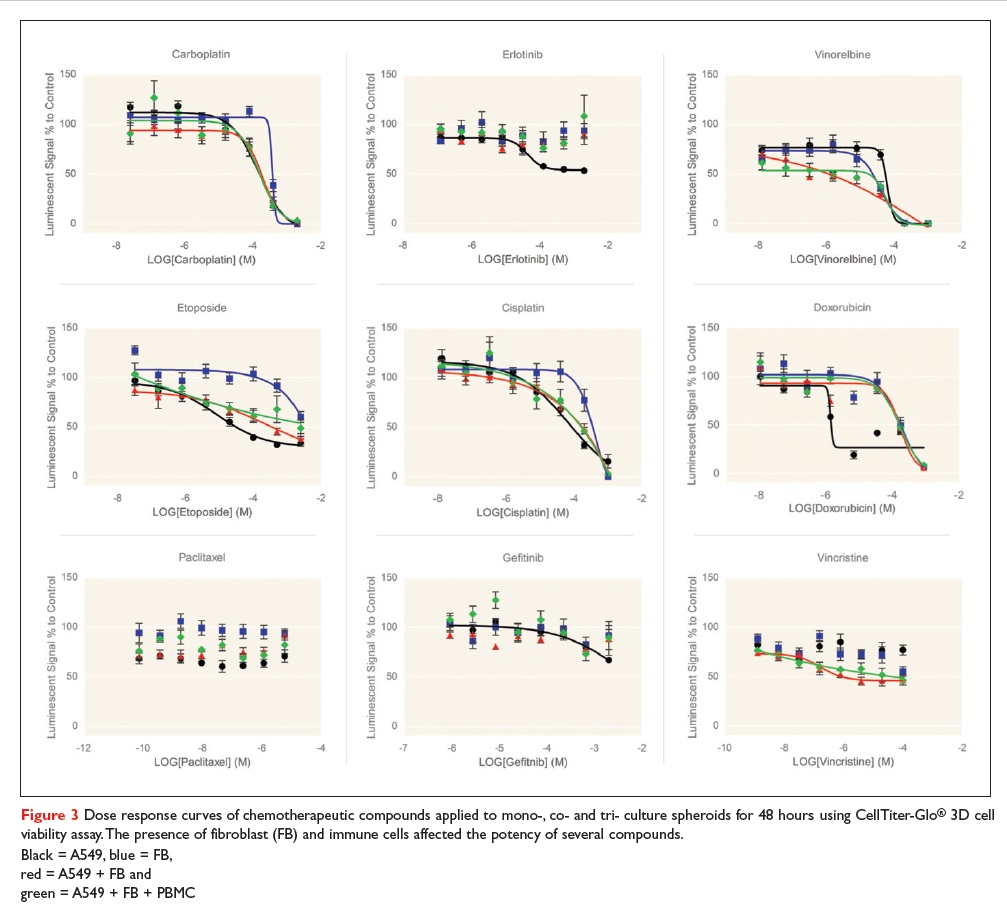 Toxicity potency (TC50) values were calculated and compared across the spheroid culture conditions (Table 1). Although the presence of FB and immune cells did not affect the potency of compounds carboplatin and cisplatin to A549 lung tumour cells, a rightshift in the potency of several other known chemotherapeutics was observed, demonstrating the protective effects of the presence of other cell types such as FB in a co-culture spheroid.

In this study, an epithelial tumour cell line was cultured in 96-well Corning spheroid microplates with and without the presence of GFP-expressing mouse endothelial C166 cells. Tumour spheroid viability was screened after treatment with various chemotherapeutics in both single tumour cell line culture and endothelial co-culture conditions. Dose-dependent responses of selected chemotherapeutics were compared, demonstrating the importance of including multiple cell types in 3D assays to more closely mimic the in vivo tumor microenvironment.

Cells were cultured in a humidified 37°C, 5% CO2 incubator for 24 hours for the formation of a spheroid in each well. After 24 hours the spheroids were overlaid with 100μL per well of 1.76mg/mL Corning Matrigel matrix (Corning Cat. No. 354234) diluted in culture medium. The Corning spheroid microplates were centrifuged at 220 x g at 4°C for two minutes and returned to a humidified 37°C, 5% CO2 incubator for four days.

Dose response curves of chemotherapeutic compounds applied to mono- and co-culture spheroids for 48 hours were generated using CellTiter-Glo 3D cell viability assay (Figure 4). The data were normalised to spheroids in the presence of 0.5% DMSO as 100% viability control. 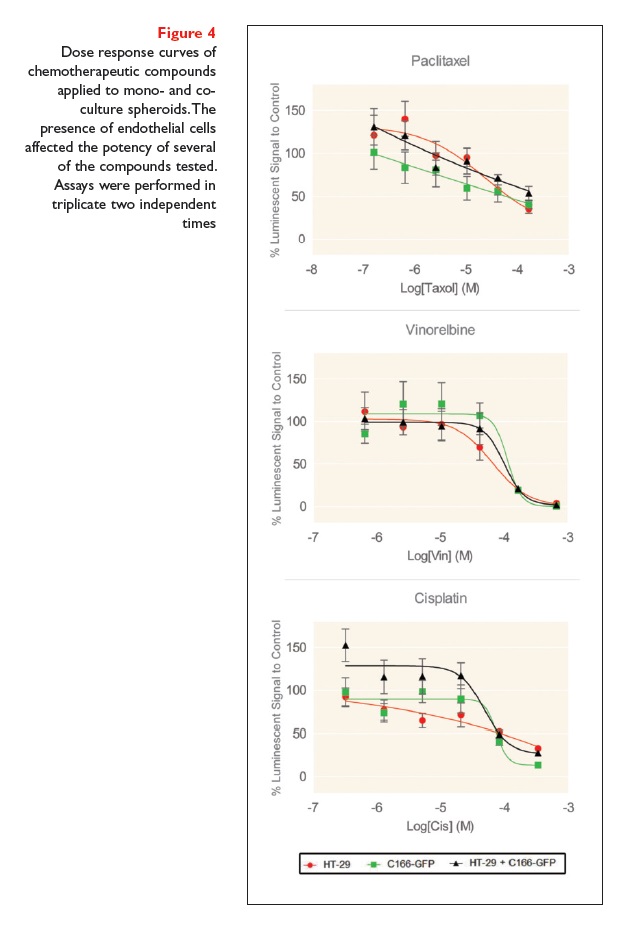 Toxicity potency (TC50) values of chemotherapeutic compounds applied to mono- and co-culture spheroids for 48 hours were generated using CellTiter-Glo 3D cell viability assay. Although the presence of endothelial cells did not affect the potency of Paclitaxel on HT-29 colon tumour cells, a right-shift in the potency was observed with Vinorelbine, and a left-shift in potency was observed with Cisplatin under co-culture conditions.


In vitro 3D cell culture models are now becoming increasingly complex, and their usefulness in supporting cell growth, tissue morphogenesis, stem cell differentiation, disease modelling, drug discovery and toxicity testing is growing. It is evident that a range of 3D models with varying physiological characteristics are required to meet the needs of specific cell types or assays.

Currently, many complex 3D models of tumorigenesis, stem cell differentiation and organoid formation employ naturally-derived ECM-based hydrogels. Combining newer technologies, such as microarray on a chip, microfluidics or even bio-printing with biologically relevant materials, including hydrogels, will optimise cell scale-up.

Collectively, these complex 3D cell culture models will provide the basis for more predictive and relevant drug screening assays and toxicity tests – as well as providing novel systems for basic research – and so aid in the identification of novel disease mechanisms, and reduce the attrition rate in early drug discovery. DDW

This article originally featured in the DDW Winter 2017/18 Issue

Hilary Sherman is an Applications Scientist in the Corning Life Sciences Lab located in Kennebunk, ME. Sherman has been with Corning Incorporated for 12 years and has worked with a wide variety of cell types including mammalian, insect, primary and stem cells in a vast array of applications. Her key roles at Corning involve creating technical documents such as protocols and applications notes as well as providing technical support and training for both the Corning sales force and customers. Sherman received her BS degree in Biology from the University of New Hampshire in 2005.

Dr Richard M. Eglen is Vice-President and General Manager of Corning Life Sciences. Eglen joined Corning in 2011 with more than 35 years’ experience in the Life Science industry. He has authored more than 320 publications, book chapters and patents, and serves on numerous industry, academic advisory and journal editorial boards.

Audrey Bergeron is an Applications Scientist for Corning Life Sciences (CLS) at the Kennebunk, Maine location. She evaluates new products and develops protocols and technical documents to support CLS products in the areas of Cell Culture, Drug Discovery and Bioprocess. Bergeron received her BA in Biochemistry from Bowdoin College in Brunswick, ME in 2012.