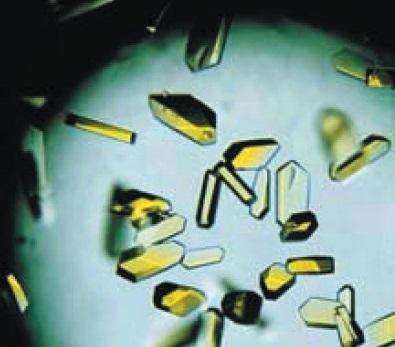 With structure-based drug design on the increase can the development of high-throughput crystallisation fulfil its promise to revolutionise the drug discovery process?

In an era when the development of drugs is hindered by the exorbitant costs of discovery and clinical trials, any method that can speed the identification of viable drug candidates is commercially very valuable. The process of drug discovery involves target discovery, as well as lead generation and optimisation.

Some of the bottlenecks in the early drug discovery process include protein expression, purification and structure identification. The emergence of proteomics promises to generate a vast number of potential targets, through identification of new proteins enabled by advances in two-dimensional gel electrophoresis and subsequent mass spectrometry and x-ray crystal structure determination.

How do biotechnology and pharmaceutical companies choose among the thousands of targets generated (Figure 1)? 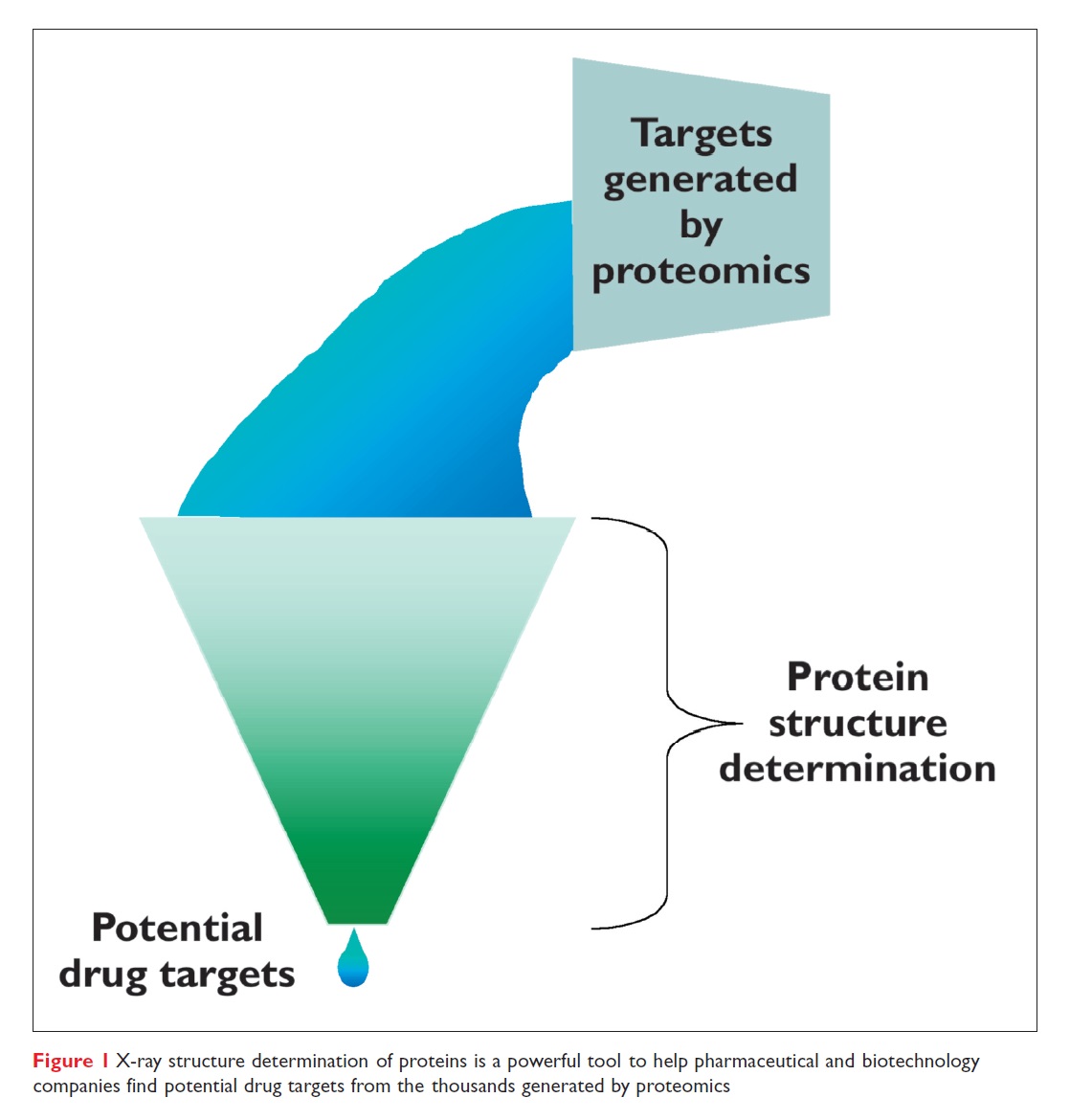 A protein’s function is dictated by its three-dimensional (3-D) architecture generating a demand for the elucidation of protein structure. Through the use of mass spectroscopy for protein identification, the amino acid sequence can be obtained; however, there has been limited success translating this knowledge into a 3-D structure that can be used to determine the function (1).

High-throughput methods are essential to quickly evaluate the growing number of potential targets. X-ray diffraction and NMR are two techniques currently used with remarkable success to determine the structure of a protein. While highthroughput methods are currently under way for NMR, they are not as far advanced as those developed for x-ray crystallisation (2).

The information obtained from the crystal structure determination can give drug discovery companies a competitive advantage not only in target validation, but also in identification and optimisation of lead molecules by narrowing the search, increasing the probability of discovering a viable drug and decreasing the costs of drug discovery. In such a cost competitive area, any method that will increase the probability of a successful new therapeutic is highly valuable. This article will deal with the benefits of using high-throughput crystallisation for drug discovery.

Rapid identification and validation of potential therapeutic targets is necessary for the economic feasibility of drug development. Proteomics will be useful to identify targets for pharmaceutical companies to explore, thus removing one bottleneck. The Human Genome Project is close to completion and there are approximately 140,000 genes in the human genome sequence (3). From this, it is anticipated that there may be as many as 5,000 to 10,000 potential drug targets (4). The result is the need for a method to rapidly validate potential targets.

In order to obtain more specific and safer drugs, high quality targets are needed (5); however, little is known about most of the proteins that are expressed from these target genes. In addition, targets must be physiologically relevant and represent key points in the disease pathway. After targets have been validated, another critical step is to develop and optimise lead molecules.

Target validation and lead molecule generation can be done using the structure of a protein. Protein structure information can serve drug design in two ways: through structure-based or rational drug design and by enabling the identification of protein function by comparison to structurally related proteins (6). The key to target selection is to know the biological function of the protein, which is keenly tied to its structure. The number of drugs designed using structure-based methods is increasing.

Drugs that target the influenza virus, such as Relenza and Tamiflu, and HIV protease inhibitors, including Viracept and Agenerase, are just a few of the drugs that have been developed through structure-based approaches. The development of the drug Relenza is one of the first successful examples of this technique (7). Relenza was designed by the researchers at Glaxo Wellcome to inhibit neuraminidase, an important enzyme in the influenza virus, based on the shape of the active site of this enzyme.

Structure-based drug design, starting with the detailed 3-D picture of a target protein, allows medicinal chemists to apply their intuition and various computational models to design new compounds that bind to the active site of the protein. In this manner, the discovery of new drug candidates no longer needs to be driven by guesswork and the brute force synthesis of hundreds of modified compounds. Structurebased drug design is at its most powerful when it begins with x-ray crystal structure determination of the target protein in complex with a natural ligand or a lead drug candidate (8). Ligand bound structures provide deep insight into catalytic mechanisms and modes of drug action.

In addition, a comparison of target protein structure, with and without a ligand, can reveal added information about protein conformational changes that occur upon ligand binding. Such information can be exploited to design mechanism- based inhibitors that have greater specificity for the target involved. In turn, this approach can increase the chance of viability of lead molecules by narrowing the search field, decreasing the incidence of toxicity through cross-reactivity with structurally related proteins and decreasing the time required for the development stage.

The human genome, which will be completed shortly, is already in the public domain. Therefore, it is imperative for biotechnology and pharmaceutical companies to beat the competition to determine the function of proteins that arise from the genome. High-throughput crystallisation can be used to quickly determine the 3-D structure of a large number of proteins.

Pharmaceutical companies have begun to use proteomics for drug discovery, but not to its full potential. In order for it to be beneficial to pharmaceutical companies, structure determination of proteins must be streamlined. The establishment of robotic high-throughput crystallisation and x-ray structure determination will allow the 3-D elucidation of an abundance of proteins and protein-ligand complexes over the next few years.

Such a largescale study of protein structure will contribute immensely to the rapidly emerging field of proteomics, which aims to define all structure-function relationships of proteins in the context of living cells and its application to the drug discovery process. With the automation of the crystallisation process and new high power synchrotron sources, high-throughput crystal structure determination is possible. This is where contract research organisations with experience in high throughput crystallisation can be useful.

Traditionally, high quality crystals of proteins are obtained by very labour-intensive experiments that require the screening and optimisation of a large number of conditions. The x-ray diffraction pattern of the crystal is then carefully measured and the x-ray data converted into a 3-D model of the protein’s shape to provide a high-resolution picture of the protein. The above process is time-consuming and lengthy and can be a serious bottleneck in acquiring the structure of a protein. A flow chart of the steps in protein crystallisation is presented in Figure 2.

Automation generally involves a liquid handler for screening preparation and tray setup, an optical recognition system and a data collection system. The first step in crystallising proteins, and perhaps the most time consuming, is the determination of optimum screening conditions to induce proteins to crystallise. Typically, crystals must be 0.3mm to 1mm in size to obtain a good diffraction pattern (9). Figure 3 shows representative protein crystals that are of diffractable quality. 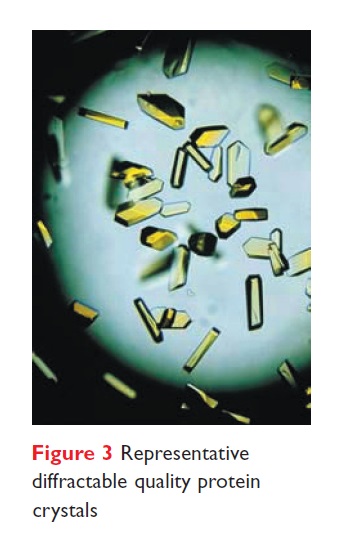 Proteins are notoriously difficult to crystallise due to their sensitivity to environmental variability and their inherent properties. Also, there are many conditions that need to be ideal in order for a high quality crystal to grow. Some of these conditions for proteins could include: pH, temperature, concentration and cofactors, to name a few. Growing high quality crystals requires finding exactly the right conditions by screening hundreds of experimental parameters and then further iterative optimisation. This screening is typically done using a statistically valid sampling of the crystallisation space (10).

Several screening protocols have been examined and include the full factorial, incomplete factorial, random and sparse matrix screening. The screening and optimisation process can require hundreds of experiments. Using computer-driven liquid handlers to set up a matrix of experiments and computer software packages to design the screening method and monitor screening conditions the parameter space can be sampled and truncated in a timely manner. Setting up the protein solutions with a robotic liquid handler, usually for either the sitting or hanging drop crystallisation method, completes the experimental setup.

The next step in protein crystallisation is to inspect the individual experiments for the occurrence of crystals. The throughput demand of large crystallisation projects requires automation of crystal image recognition and analysis. Typically, this will require a microscope with digital imaging capabilities and a precision translation stage. The results of the screening determine which conditions will be used for the next set of experiments. In this iterative manner, the sampling space is narrowed and the optimum crystallisation conditions determined. The use of high throughput screening significantly reduces the time involved in crystal tray preparation and visual inspection.

The software packages can capture every aspect of the crystallisation trial, including the properties of the target protein, the dimensions of the crystallisation plates, the exact formulation and the results of each crystallisation condition. This allows facile tracking of conditions that are determined to be optimum for crystal growth. Once a crystal of the protein is in hand, the diffraction pattern can be obtained. From this the structure of the protein can be determined and the road to drug discovery begins.

Drug discovery continues to be a competitive and capital-intensive venture. Pharmaceutical and biotechnology companies are continuously searching for new drugs to commercialise. As the human genome becomes available, the race to validate pharmaceutical targets becomes tighter. Technology platforms, such as high-throughput crystallisation, help to empower drug discovery to translate the output of the genomic effort into validated biological targets. The impact of highthroughput crystallography is two-fold.

Target protein selection and validation can be more specific and exact and high-throughput screening of potential lead molecules can be replaced with the logical design of these molecules on a faster time frame, one that keeps pace with the needs of drug discovery. In this manner, the use of high-throughput crystallisation can revolutionise the drug discovery process. DDW

This article originally featured in the DDW Winter 2000 Issue

Sara Moran received a BS from Ithaca College, Ithaca, New York and a PhD from the Michigan State University, working with Dr Daniel Nocera in the field of inorganic photochemistry. In 1997, she worked with Dr Fred Lewis at Northwestern University on electron transfer in oligonucleotides. From there, she went to work at Nanophase Technologies Corporation as a Senior Scientist. Currently, she is a Senior Technical Writer at MediChem Research, Inc.

Lance Stewart received an Honors BSc from McMaster University in Hamilton, Ontario and a PhD from Cornell University, working with Dr Volker Vogt in biochemistry. In 1992, he worked as a Senior Fellow in the Department of Microbiology at the University of Washington and joined the faculty of Department of Biology as a Research Assistant Professor in 1995. He is currently President and CEO of Emerald BioStructures in Bainbridge Island, Washington.