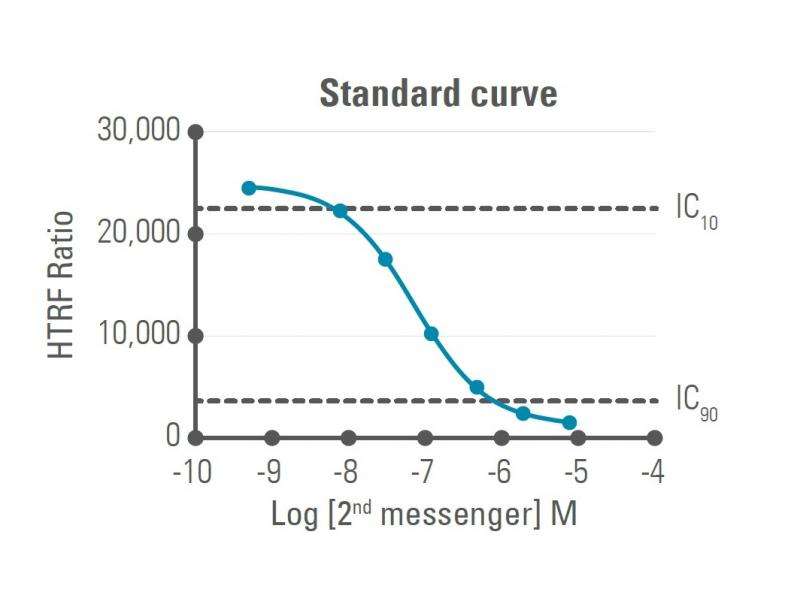 The question of choosing which methods to use for analyte quantification (signal vs concentration determination, parameters, and format) continues to generate heated debates and divergent understanding.

Today, there is still a communication gap between researchers depending on their field of expertise and background, such as HTS, pharmacology, lead optimization phases, medicinal chemistry, and more. This whitepaper addresses that specific topic and summarizes the results of a workshop held by Cisbio with a focus group of renowned researchers in the field of GPCR biology and lead discovery (*). Our goal was to come up with methodology recommendations on which biologists, screeners, pharmacologists, and medicinal chemists could share common understanding, and to provide guidance based on facts and results.

I. Data analysis: what is available today? 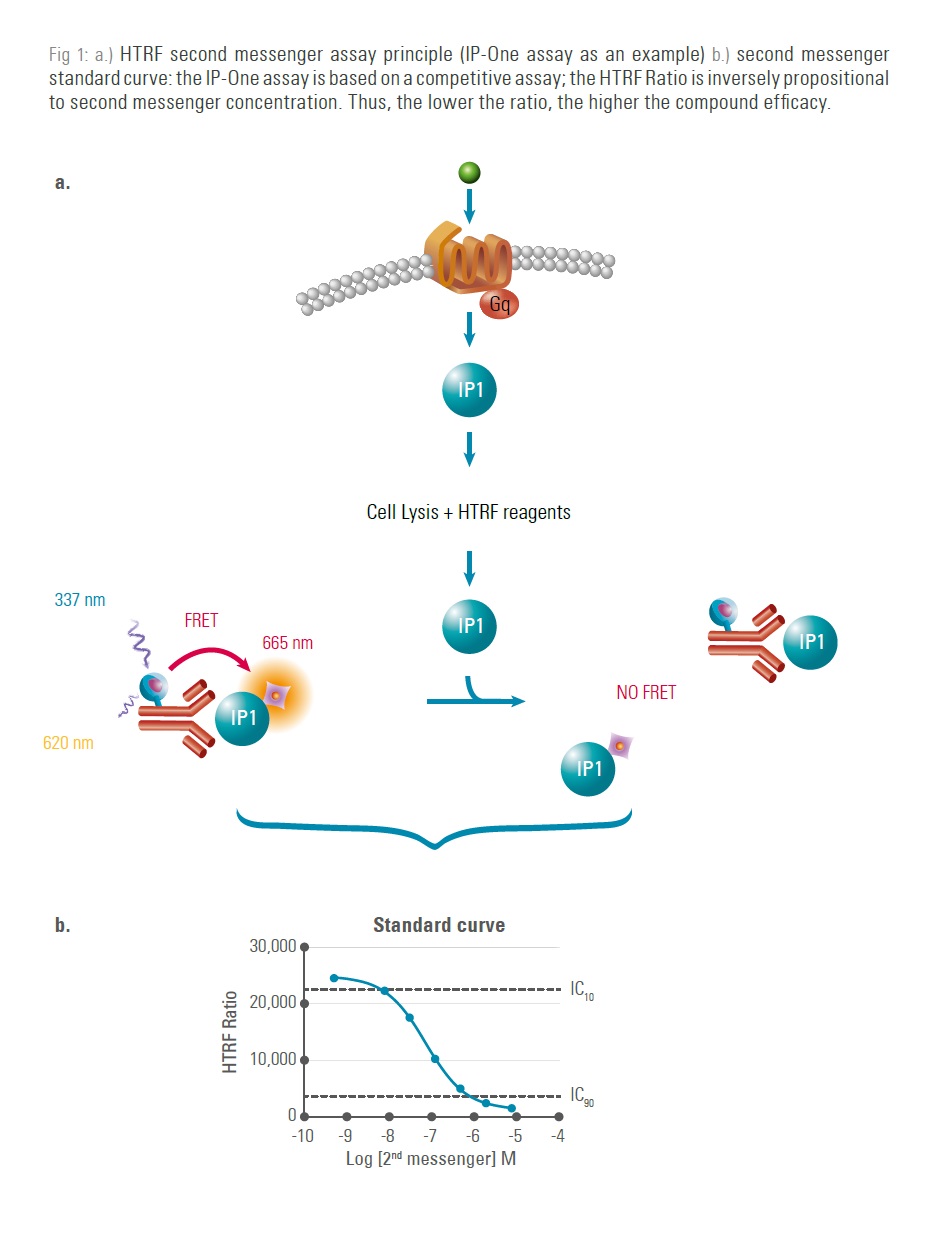 The kits provide IP1 or cAMP standards to build a curve enabling accurate second messenger quantification in biological samples (Fig. 1b). The dynamic range, which determines the HTRF Ratio values for which accurate quantification of second messengers is possible, is comprised between the IC10 and the IC90 values of the standard curve.

Using these experimental values, various methods can be applied to determine compound characteristics, such as potency (EC50 for agonists and IC50 for antagonists) and efficacy (maximal sustained response) as described Figure 2. 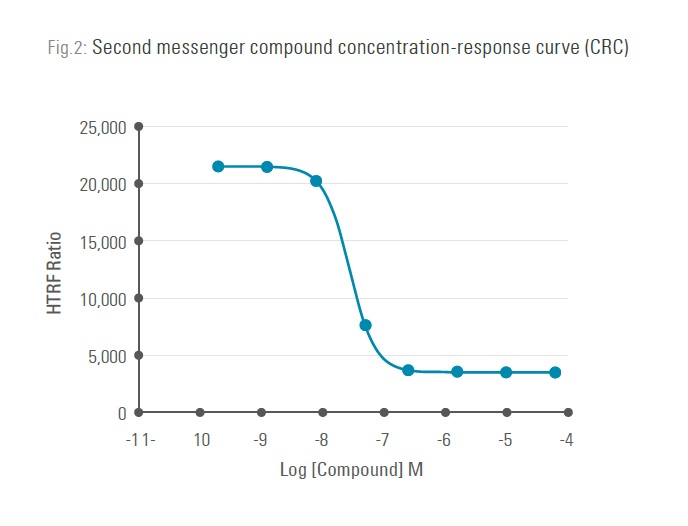 As shown in Figures 3 and 4, four methods are described to analyze the obtained experimental data. In each method, Y is plotted against X, which represents the log of the stimulation compound concentration (log[Compound]). 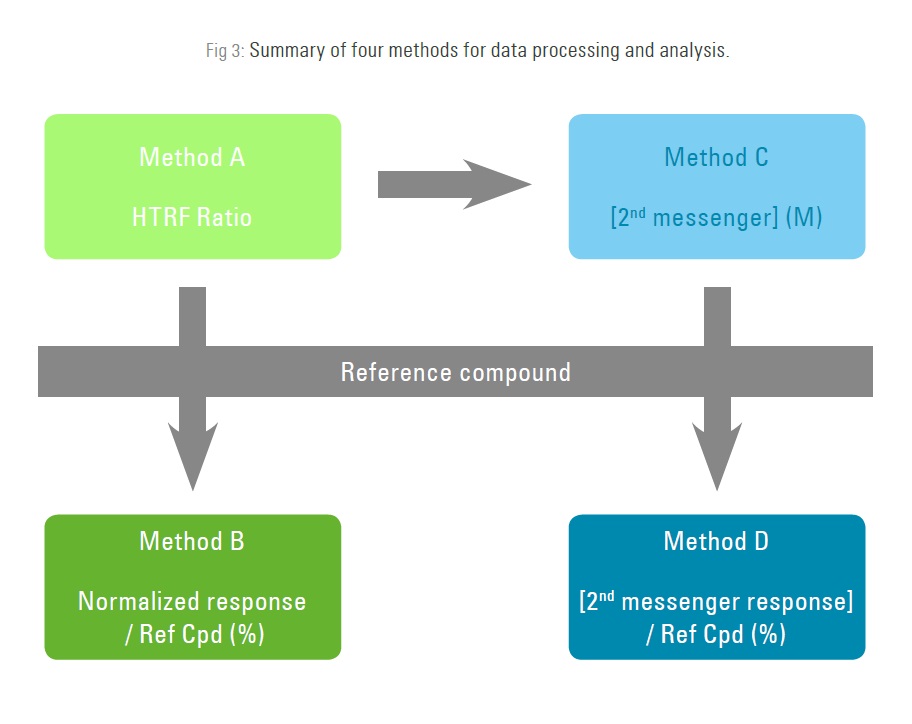 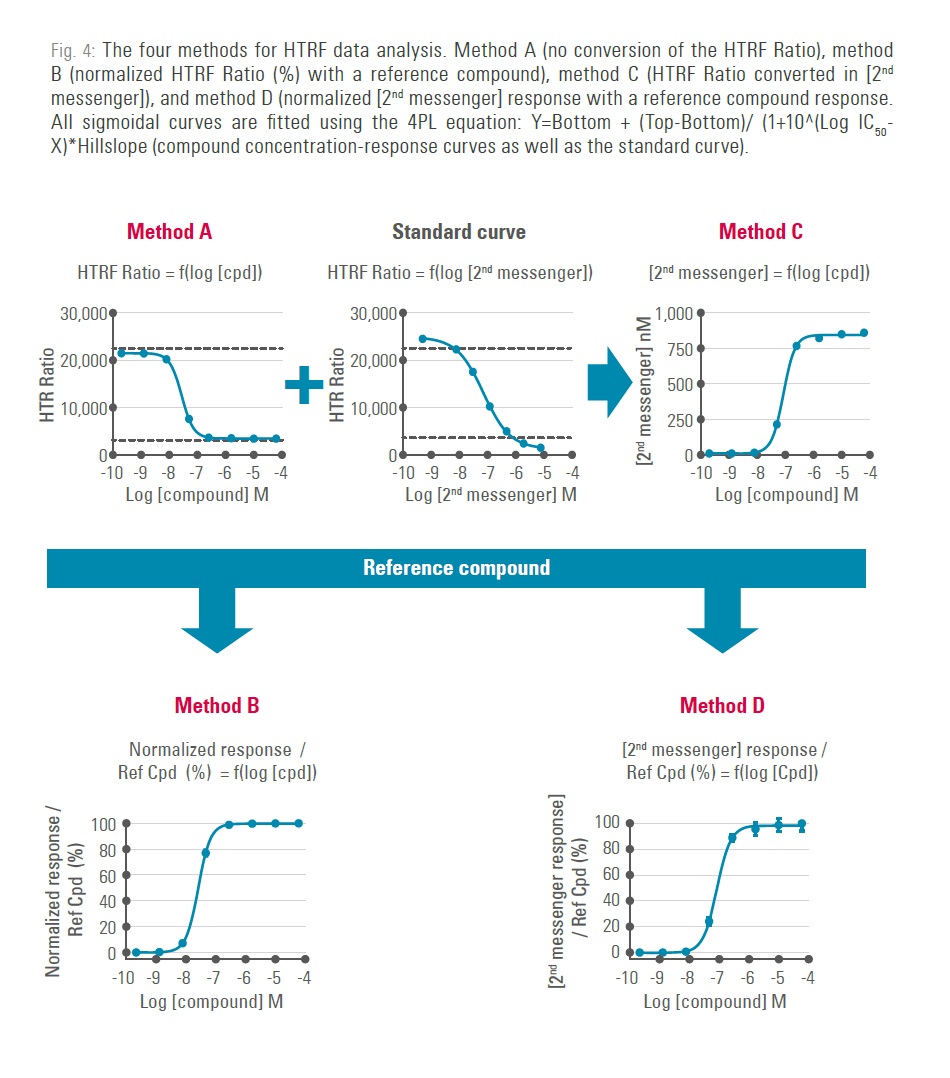 In method A, the most basic of the four, the HTRF Ratio (Y) is plotted against log[Compound]. Using the standard curve, this data can be transformed into second messenger concentration against log[Compound], method C. When a suitable reference compound is available, both methods can be normalized to it, resulting in methods B and D respectively.

Method A: In this first analysis, HTRF Ratio curves are used to determine EC50 (EC50 A) and efficacy (Efficacy A) of the compound of interest (the standard curve is not used).

Method C: The HTRF signal obtained with each concentration of compound is first converted into second messenger concentration by interpolating the data using the standard curve. Then, a new sigmoidal concentration-response is plotted: [second messenger] to log [compound] from which EC50 C a nd Efficacy C can be calculated.

In Figure 5, the agonist concentration response curves are plotted using the four methods (A, B, C, and D) described above, using ACh as a reference compound for methods B and D. Efficacies and potencies are summarized in the table. 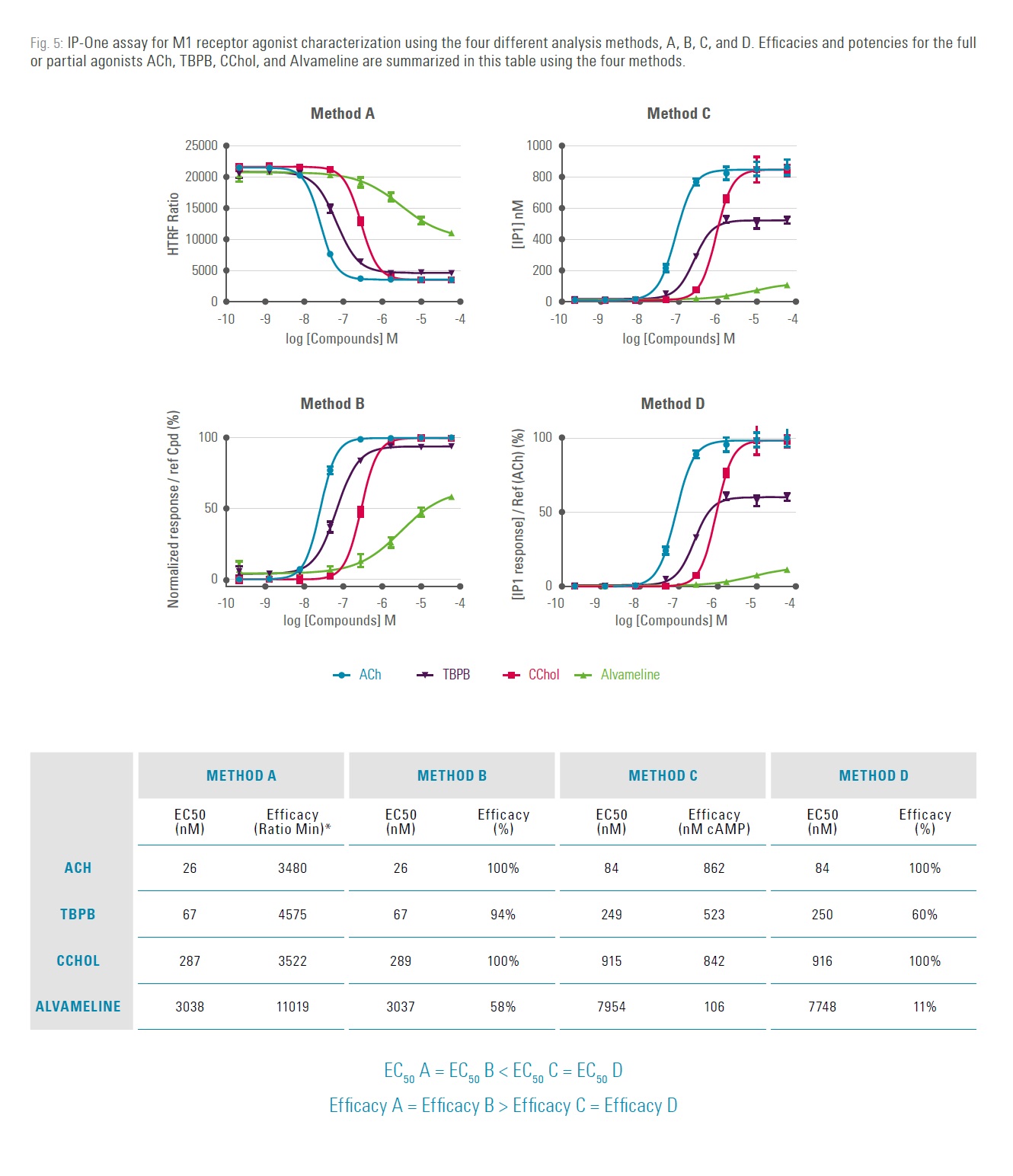 II. What can we learn from math and theory?

Data transformations must not skew data, either in terms of relative values and/or error. Ratio methods work well in general. However, since all assays amplify data to varying extents, absolute potency values are not useful. Only relative measures of activity compared to a standard compound can be considered useful.

As such, while potency ratios can be used for full agonists, the Black Leff operational model must be used to compare full to partial agonists (Leff et al (1993 (1)); an alternative and simpler analysis utilizes Log(maximum response/ EC50) (Kenakin, 2017 (2)). In that regard, the main difference between Methods A to D is system sensitivity. Thus, signal amplification from highest to lowest is: HTRF Ratio (A) = Normalized Ratio / Ref (B) > [2nd messenger] (C) = [2nd messenger] / Ref (D) (as reflected in Figure 5).

Insofar as sensitivity is an issue (such as for compound screening), methods A and B offer advantages. Otherwise, ΔLog(max/EC50) values for agonists do not deviate for the assay formats except for [2nd messenger] (C or D), which is slightly lower. When using the ΔLog(max/EC50) parameter, converting to the second messenger level is not mandatory for comparing drug activity to a standard. Nevertheless, method C and D can also provide some advantages that will be discussed section IV.

III. What method should be chosen for compound library screening?

The main goal for compound screening is to find new chemical starting points, with accurate EC50 and efficacy determination being of secondary importance. To identify low potency compounds, it is therefore crucial to develop the screening assay as well as the data analysis to reflect this consideration.

In first instance, using the standard curve for reference, expression levels and cell numbers need to be adjusted to determine the ideal assay window, as described previously (3). Concerning agonists and positive allosteric modulators (PAMs), it would then be possible to increase the assay sensitivity by increasing the cell numbers slightly to make sure weak hits can be identified reliably.

Conversely, to develop a suitable and sensitive screening assay in the case of antagonists, it is important to lower the cell number in order to be able to read FRET values corresponding to agonist stimulation (0% antagonism) in the dynamic range of the second messenger calibration curve. However, it is not necessary to determine the 100 % antagonism value in the highest part of the calibration curve with accuracy. On the other hand, for “MedChem” studies, it is an absolute requirement to read the full antagonism and control values within the dynamic range.

In terms of analysis methods, we recommend using either Method A or Method B (if a suitable reference compound is available). Although EC50 and IC50 values should be very similar between both methods (Fig. 5), Method B has the advantage of fitting the concentration response curves to 100%, as well as reporting the percent of response at the maximum concentration tested, which is more intuitive than reporting the actual HTRF Ratio.

EC50 values determined in the screen based on Method A or B are likely to be correct with respect to the relative potency of the hits found. However, absolute potency differences between the various hits is likely to be incorrect, as they could be influenced by expression levels and cell numbers (Fig. 6).

This becomes more significant once we want to further develop the hits, in which case Method A and B are not ideal. It should be emphasized that several weak hits leading to modest fluorescence increases in screening, using method A or B, do not systematically translate into hits when using method C or D (Fig. 5). As the aim of compound screening is to find as many possible chemical starting points, we recommend using Methods A or B for this phase of the drug discovery process.

In the context of medicinal chemistry, the main goal for compound characterization is to track relative potency changes within a certain chemical class. To achieve this, it is essential to make certain adjustments to the “MedChem” screening assay and data analysis.

In first instance, using the standard curve for reference, the expression levels and cell numbers must be adjusted to determine the ideal assay window as usual, making sure the maximum and minimum values are clearly within the dynamic range of the standard curve. If possible, frozen cells could be used, plated in the standard manner 24 hours before the experiment, to increase the robustness and consistency of receptor expression levels as well as reduce the cell culture burden.

Furthermore, a standard curve should be added for each experiment, ideally on the same screening plate. For analysis in “MedChem” screening mode we recommend using either Method C or D (if a reference compound is available). Method A or B should no longer be used/ reported to track relative potency.

The EC50 and IC50 values obtained with Method C or D should be very similar (Fig. 5). The advantage of using Method D is that the minimum and maximum fitting parameters can be set to 0 and 100% (Fig. 4). Furthermore, for weak compounds where an EC50 and IC50 value cannot be determined, the percentage of activation or inhibition at the highest concentration can be given with percentage values that are interpreted easily, thereby providing potency information at the lower end of the potency range, ideal for the initial compound characterization phase.

It should be noted that with respect to agonists and PAMs, it is likely that potency will decrease when measured in the “MedChem” assay using Method C or D, as compared to the original “screening” assay (described earlier in the section “What can we learn from math and theory?”).

This may be seen as a disadvantage, however, since the main goal of the compound characterization phase in the drug discovery process is to track potency improvements of individual compound classes, we recommend using only Method D (or C if no reference compound is available). Indeed, Method D (and in some cases C) display several advantages when it comes to the “MedChem” context.

Firstly, it seems more accurate to report potency that is only related to a biological function and not artificially boosted due to amplification of the assay itself. Secondly, as the relative potency increase or decrease are normalized via the standard curve, they are independent on cell numbers. A further illustration on the effect of cell numbers and data obtained with the four different analysis methods is shown in Figure 6. 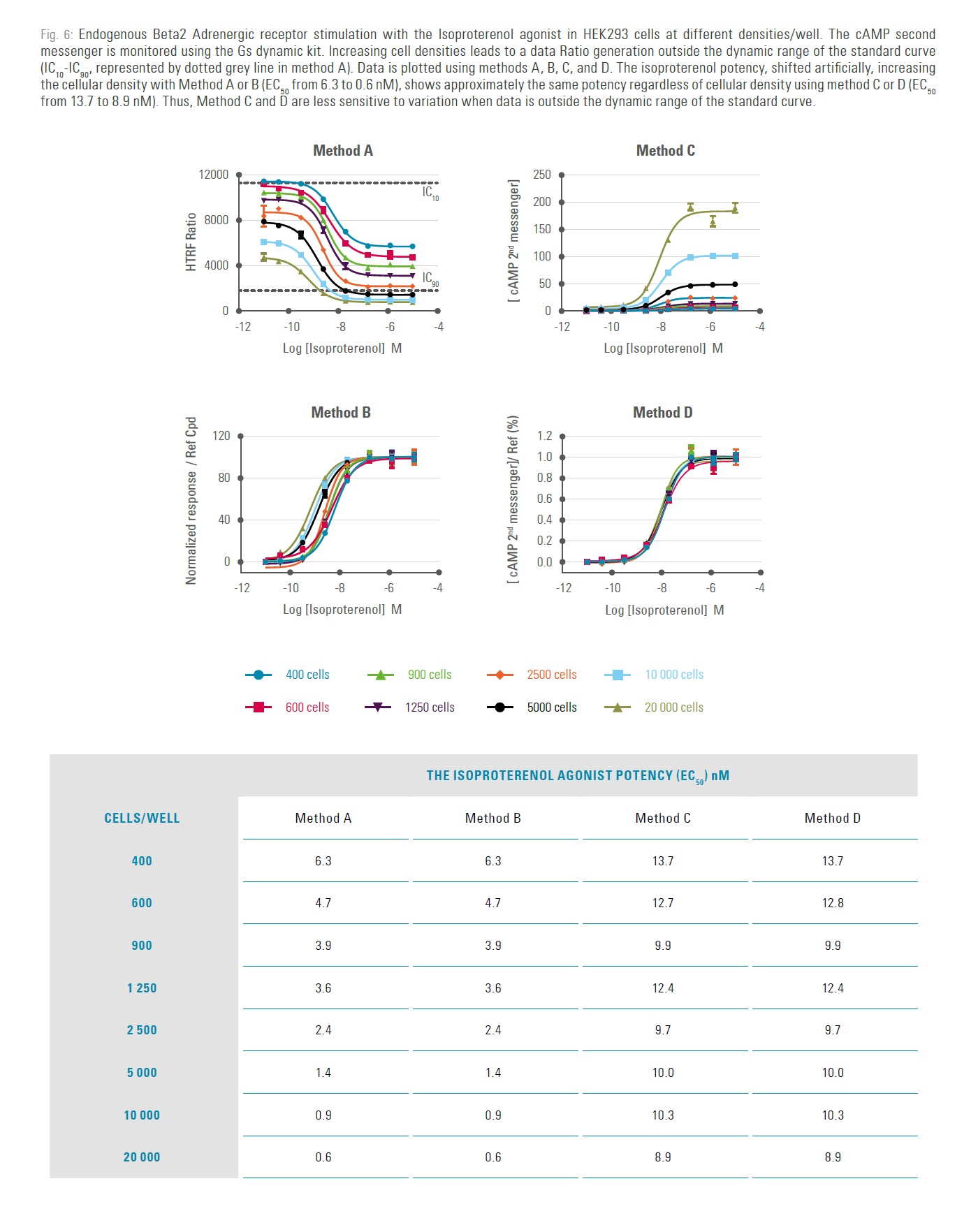 Method A should nonetheless be used as a quality control to check whether the HTRF Ratio curve is in the dynamic range in each experiment. To avoid confusion, we recommend not reporting that aspect.

This article discusses the range of approaches available for processing data from immune-competitive formats, such as second messenger assays for GPCR investigation and screening. Cisbio took the initiative of creating a focus group comprising several renowned experts from the industry and the academic world to address this debated question and, ultimately, to provide recommendations applicable to all researchers.

The group acknowledged that high throughput screening (HTS) and medicinal chemistry (“MedChem”) are disciplines that differ in their purpose, and therefore in their data interpretation needs. While “MedChem’ is concerned with revealing subtle differences in potency changes, the field of HTS puts emphasis on identifying all drug candidates.

To summarize their joint conclusion:

The Cisbio workshop resulted in the above consensus and, taken together, these two methods should become a reference for immune-competitive assay data interpretation throughout the drug research process, from screening to pharmacology.

This whitepaper was sponsored by Cisbio, you can download the original PDF here