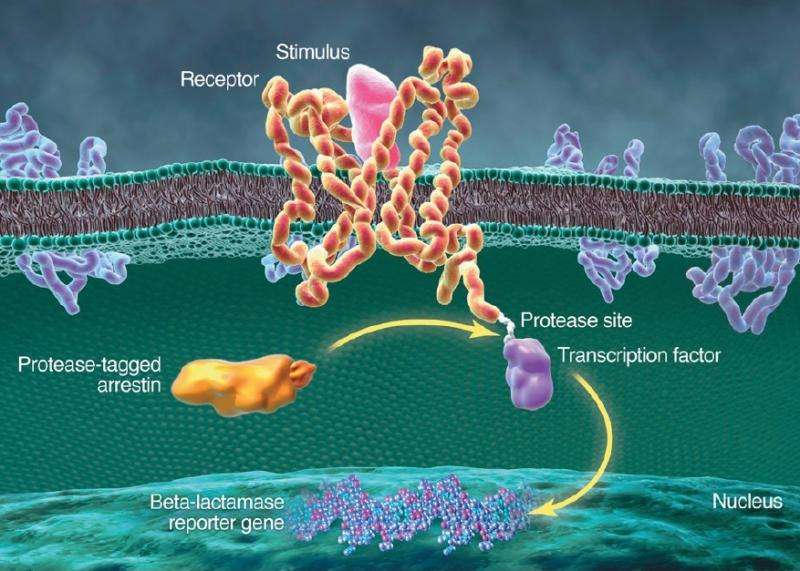 GPCRs are the most studied drug target class and have a proven record as valuable drug targets, with 40-50% of marketed drugs being modulators of GPCR function. Despite the intense effort focused on these targets by the pharmaceutical industry over many years, numerous challenges remain.

HTS directors were asked to list the types of targets they screen and to provide the percentage each represents of the total wells screened per year for 2007 and then forecast for 2009. The averaged percentages are shown in Table 1 along with the number of respondents using each target type. 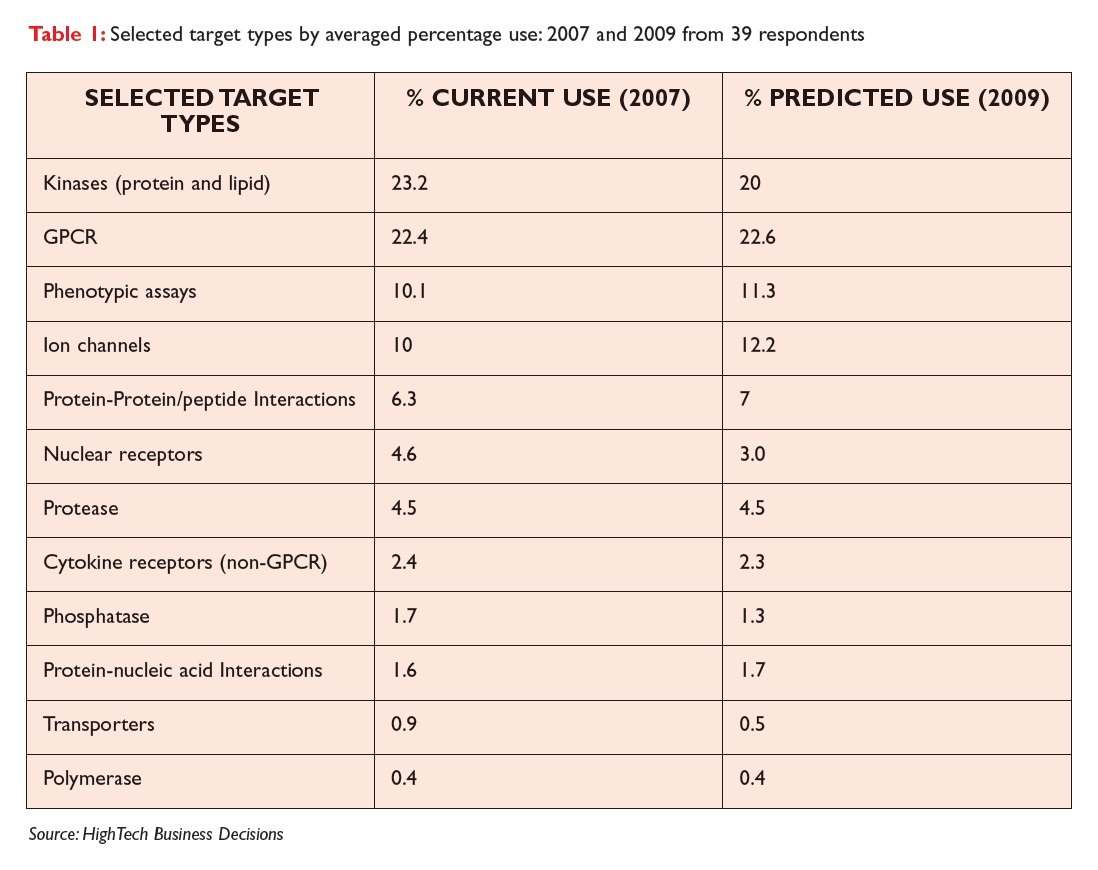 Other target types with expected increases in use are voltage and ligand- gated ion channels, and protein-protein interactions. Novel, specialty targets are expected to grow substantially in use. Altogether, 39 respondents provided data for both 2007 and 2009.

Those respondents not providing data for 2006 indicate that the target types provided by therapeutic groups fluctuate dramatically year to year and they cannot predict these shifts in target types. Several respondents mentioned the increasing use of phenotypic assays and high content screening (HCS) in the future.

GPCRs are so important pharmacologically because they are cell surface receptors that respond to a variety of extra-cellular stimuli (drugs, neurotransmitters, hormones, odours and others) and transmit responses initiating intracellular signalling events that lead to a host of physiological effects.

Functional assays for this crucial target class require cells and, in recent years, mammalian cellular expression systems have become the standard for GPCR screening. Because GPCRs are such a rich source of drug targets, researchers have developed many approaches to GPCR screening.

Some optical-readout assay systems that do not require displacement of a known ligand to measure activity include PathHunterTM β-arrestin translocation chemiluminescence technology (DiscoveRx) and the imagingbased Transfluor technology (Molecular Devices) have unique advantages in orphan GPCR assays because displacement of a known ligand is not required. However, assay development is challenging for both of these technologies. Each of these assays have advantages and disadvantages.

For example, while imaging-based detection gives information of intracellular translocation, imaging is much slower than Ca++ assays, making imagingbased assays less suitable for primary screening than a single readout. The IP3 detection technology (HTRF® from Cisbio) can also be used for orphan receptors if they have constitutive activity. HTRF can be run in high throughput and used to identify agonists, antagonists and inverse agonists.

Recently, Cisbio reported that its IP-One HTRF assay could be used for detecting slow-binding agonists. IP1 is a metabolite in the inositol phosphate pathway and is a better assay for detecting slow binding agonists than Ca++, which has a very short read out and cannot be used for long compound incubation. However, Ca++ is more sensitive than IP3. In our survey we asked HTS lab directors about the types of cell-based assays they used. Based on our interim findings of 39 respondents, the types of cell-based assays are reported in Table 2. 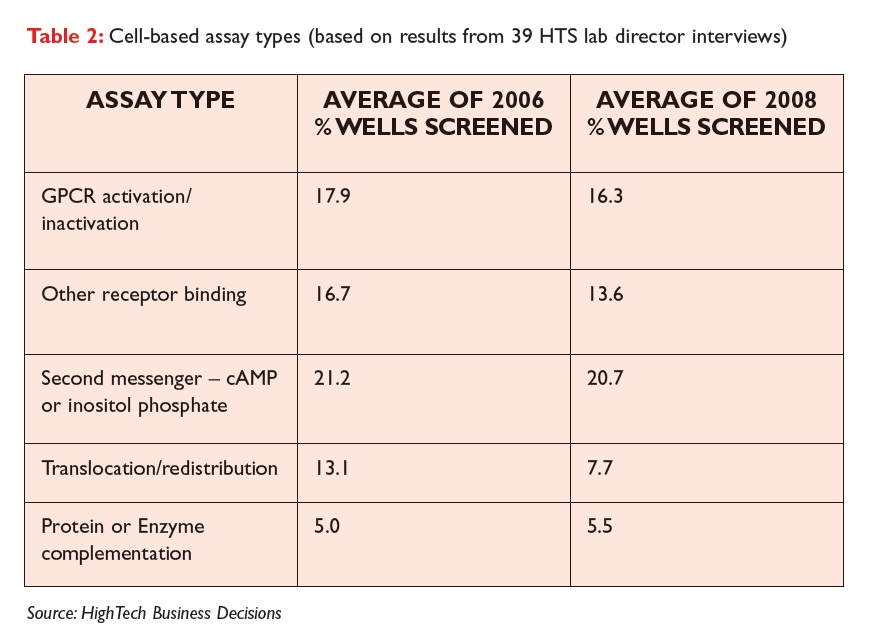 While compounds binding to GPCRs are typically classified as agonists, partial agonists or antagonists, GPCR signalling may involve more varied mechanisms than a simple two-state model of active and inactive forms would suggest. Other forms of regulation of receptor signalling have been recognised over the past decade that involved receptor dimerisation, heterodimerisation, interaction with non-GPCR effector proteins and other mechanisms.

Each of these different active states can display different ligand binding profiles, and in vivo, different pharmacology. Thus to the extent that cell-based functional assay systems can recapitulate this complex biology, they will provide assays that are more predictive of clinical results. Although it has been known for many years that

GPCRs can multimerise, the pharmaceutical industry has only recently begun to explore this property. Multimerisation is part of the normal trafficking and function of GPCR may provide a new approach to these targets. Furthermore, understanding multimerisation of GPCRs may explain pharmacologic properties of ligands and drugs. Invitrogen technology provides competitive binding assay pharmacology in a cell-based assay platform.

Tango™ GPCR assays allow isolation of target GPCR signal to be separated from the background of endogenous GPCRs, thus reducing the number of false positives during HTS. In early 2007 Invitrogen acquired Sentigen/CMT, obtaining capability in cell scale-up and production for cell based assays and Tango™ Assay, a proteinprotein interaction assay applied to GPCR screening.

The Sentigen/CMT acquisition provided Invitrogen with an entry into the GPCR assay and screening market, which the company reports will be a major focus in the next two to three years. The engineered Tango assay, illustrated in Figure 1, uses a reporter gene readout. 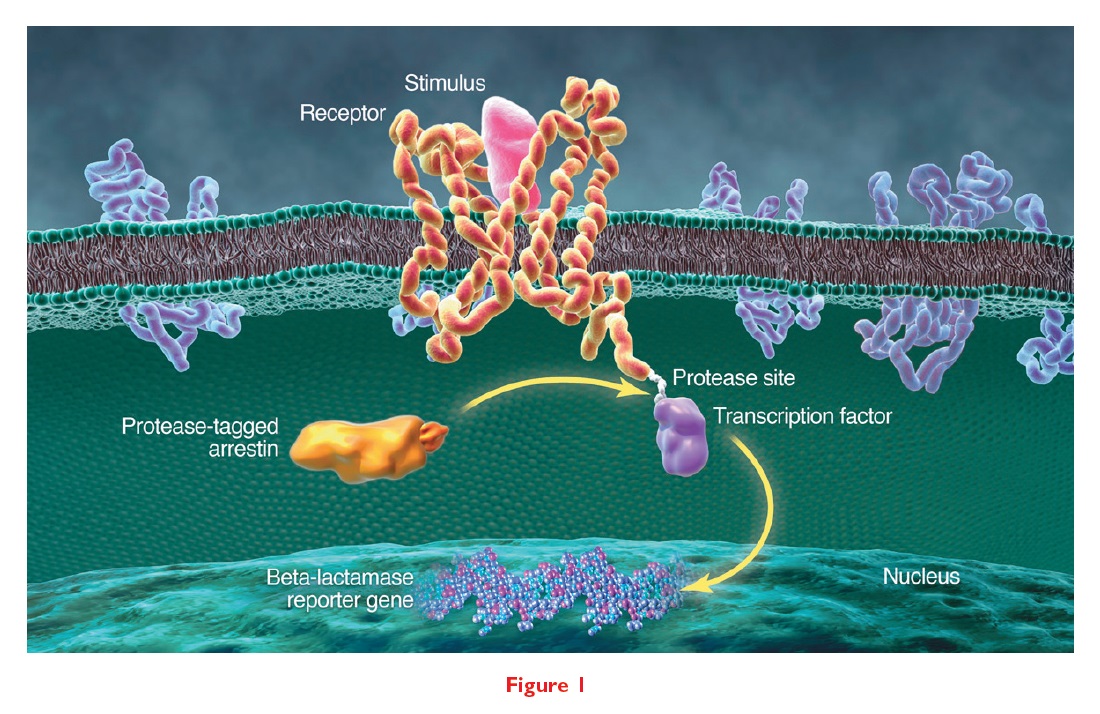 When the GPCR is activated, it binds an intracellular protein (arrestin) with a protease activity. When the arrestin binds to the GPCR a tethered transcription factor is released via protease cleavage, allowing the transcription factor to enter the cell nucleus, bind DNA and initiate transcription. One of the advantages of the Tango assay is that it is highly specific to the receptor under investigation, reducing background signal and identification of false positive hits through endogenous receptors.

DiscoveRx, whose products are distributed by GE Healthcare, has launched a GPCR profiling service using its PathHunter™ beta-arrestin technology platform for 32 ligand families. PathHunter™ Arrestin technology measures GPCR activation without imaging or second messenger detection, furthermore, the target does not need to be overexpressed.

The PathHunter™ platform can be used in studies of dose response, agonist/antagonist activity and allosteric modulation. GPCR assays historically involved competition assays using radioactive labels. This approach, besides having the inconvenience and hazard of radioactivity, requires a known ligand. This is not always the case and many orphan receptors remain.

Now fluorescent assays predominate, as illustrated in Table 3, based on interviews with 39 respondents, 13 of whom reported their GPCR assay detection mode. 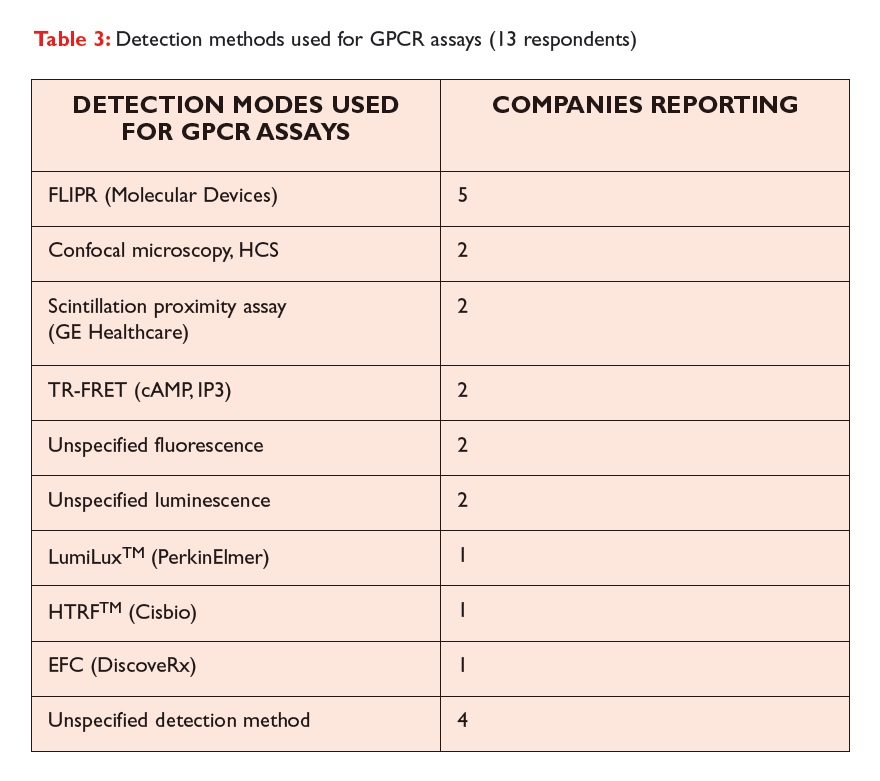 Multispan has launched a few unique GPCR panels for compound profiling – the FFA (free fatty acid) receptor family which is typically difficult to develop for HTS. Multispan has the entire FFA family with a signal to noise ratio of 10. Multispan has also launched a prostanoid family panel of nine receptors. This family is involved in inflammation, cancer, cardiovascular disease and a wide range of disease indications. The Multispan assays use FLIPR readouts of calcium signalling. 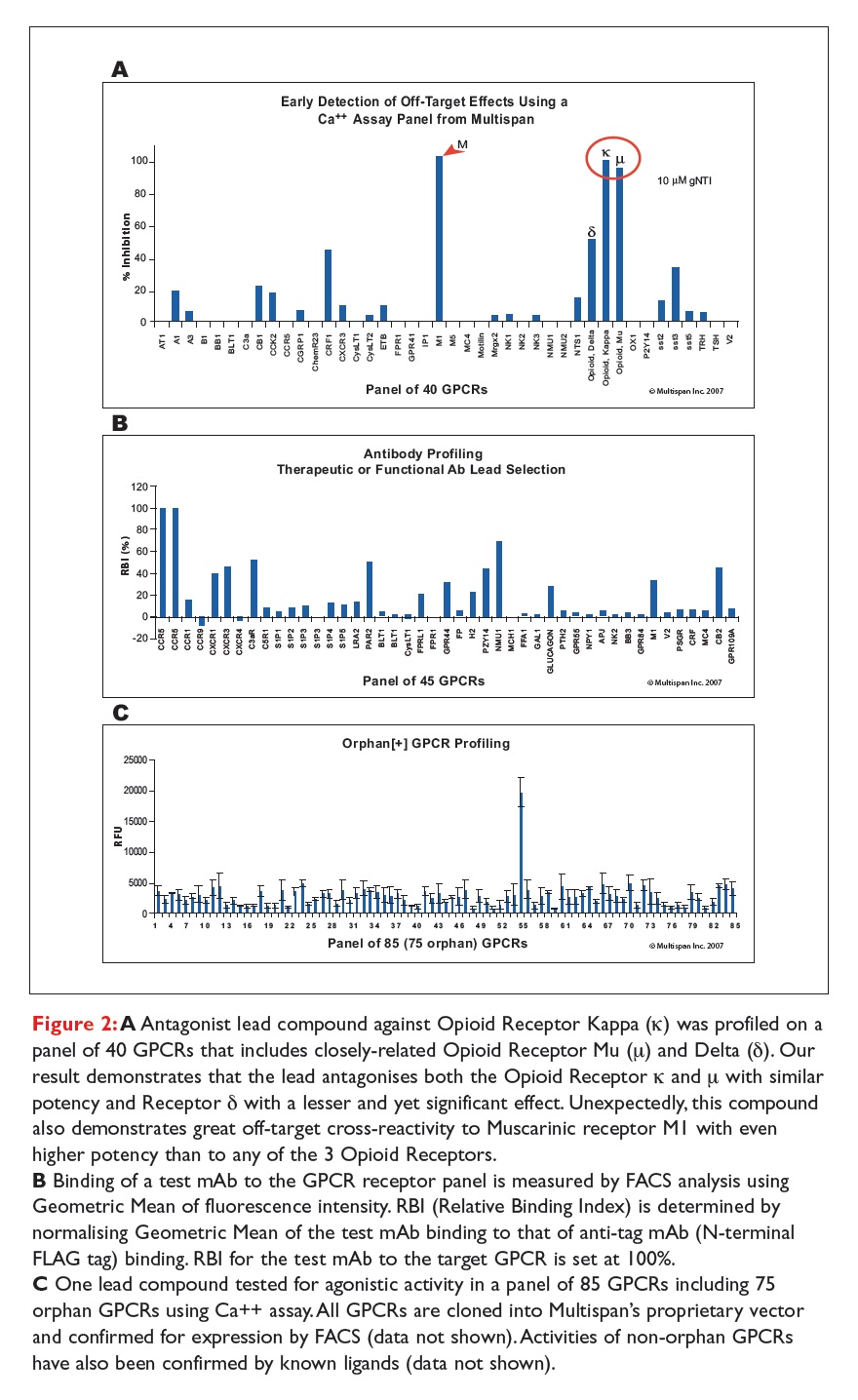 Another challenging family for scientists is the glutamate receptor family, also called the metabotropic receptor family which has eight members. Multispan plans to launch a panel of the complete family by the end of 2007.

GPCRs with no known ligands (orphan receptors) present a significant opportunity for drug discovery because it opens up new, unexploited targets. Furthermore, identifying agonists or antagonists may lead to discovery of the endogenous ligands and reveal insight into the function of orphan receptors. GPCR panels for orphan screening include known GPCRs as positive controls. However, ligand displacement assays cannot be used for deorphanisaion as known ligands are not available.

Drug repurposing is finding new uses for existing drugs with known safety. Access to panels of GPCRs including those with unknown function offers the opportunity for drug repurposing, an important trend in an industry trying to circumvent the need for expensive discovery efforts and safety testing.

Drugs with known clinical safety profiles may be found to have application for other, unexpected indications. Access to large panels of GPCRs including complete GPCR families provides the ability to explore in great detail the selectivity and specificity of GPCR ligands, and potentially uncover new uses for existing drugs. 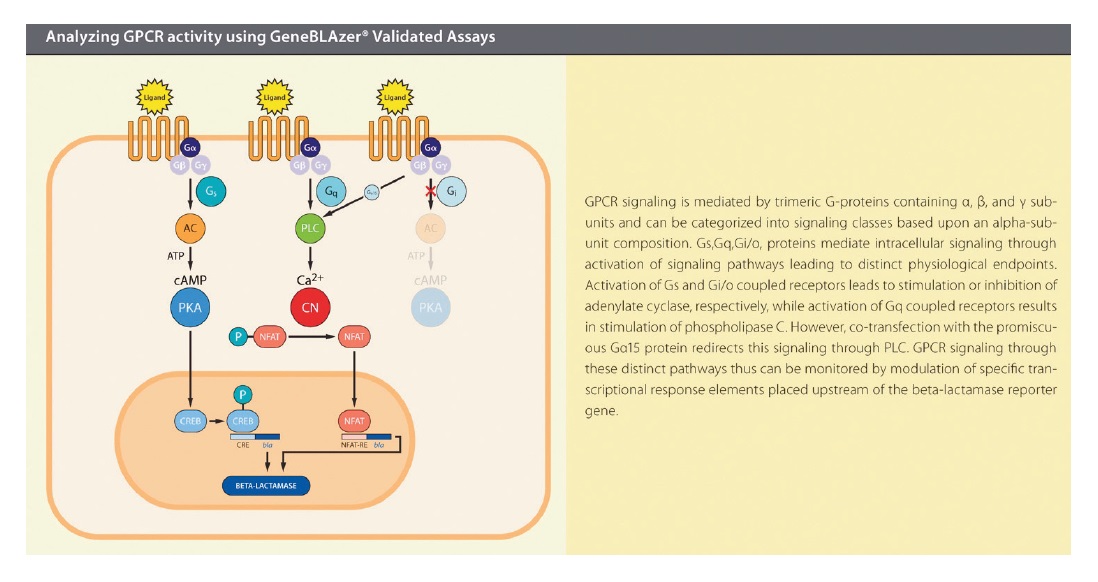 While a very old and intensively studied target, technology for assaying GPCRs continues to evolve and pharmaceutical and biotechnology companies continue to search for drugs to this target class. We anticipate that more comprehensive assay panels will be assembled, and assays with the ability to explore the more subtle regulatory mechanisms of oligomerisation and allosteric modulation will be developed. DDW

This article originally featured in the DDW Fall 2007 Issue

William Downey is President and Managing Director of HighTech Business Decisions, a consulting company that specialises in market research for business-to-business biotechnology, pharmaceutical manufacturing, medical and electronic products. HighTech Business Decisions has been serving the biopharmaceutical manufacturing, medical and electronics industries for more than 10 years. He has written numerous articles regarding biomanufacturing, presented at several conferences and worked with clients in the areas of marketing and strategy. Mr Downey has more than 25 years of industry experience, and has held various positions in marketing, sales, strategy and finance for both private and public companies. He has a Masters in Business Administration from Washington University in St Louis and Bachelors from the University of Michigan in Ann Arbor. Dr Shauna Farr-Jones has been working as an analyst with HighTech Business Decisions for more than seven years on market research of HTS, biologics manufacturing and drug discovery technologies. She also provides science writing and strategic editing to biotechnology companies seeking funding from government agencies and private investors. She was a post-doctoral fellow at the University of California, where she conducted research on protein structure. She has a PhD in Biochemistry from Tufts University, and a BSc in Chemistry from the University of Southampton.