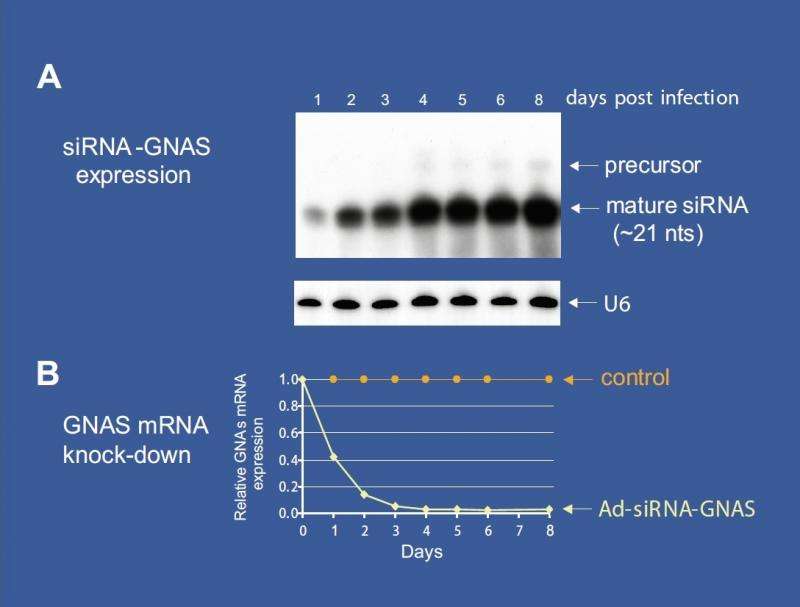 One of the major challenges facing the pharmaceutical industry today is the identification and validation of novel, high-quality drugable targets in underserved disease areas.

This paper briefly outlines the latest advances in in vitro siRNA-based screening of gene function for target discovery. Additionally, the identification and validation of targets for osteoarthritis therapies through the functional screening of adenoviral siRNA libraries in human primary chondrocytes will be presented as a case study for this technology.

Using this approach, both new targets and previously known regulators of chondrogenesis were identified and validated.This functional screening technique has also been applied to the discovery of novel, drugable targets for therapeutic development in Alzheimer’s disease, asthma, osteoporosis and rheumatoid arthritis.

Since its discovery in the late 1990s, RNA interference (RNAi) has quickly become recognised as a powerful tool for determining protein function. The mechanism of action of RNAi has been thoroughly studied and reviewed in detail (1,2) and will not be addressed here. What is well accepted is that the reduction of protein levels in the cell, through specific mRNA inhibition, mimics the effect of antagonising that protein using therapeutics.

Through the careful design of biological assays, which have direct relevance to disease pathology, one can use siRNA to observe the phenotypic effects induced by the loss of a specific protein’s activity. Consequently, one can identify the protein’s role in disease pathology and the likely outcome of antagonising that protein using a (small-molecule) therapeutic.

Efficient delivery of siRNA into mammalian cells is essential to achieve the levels of mRNA (and therefore protein) knockdown required to observe alterations in cell phenotype in vitro. Several recent reviews discuss the details of various methods of siRNA delivery into mammalian cells (3,4). In general two types of siRNA delivery systems are used: transfection of synthetic siRNA oligonucleotides or viral transduction of shRNA which is then intracellularly processed into siRNA (5).

Transfection transports siRNA into the cell via lipid vesicles, electroporation or other methods, whereas viral delivery involves packaging the DNA (or RNA) encoding the desired siRNA into a virus, which is then used to efficiently deliver the siRNA into the cell. The most significant advantage of viral delivery is that it allows for highly efficient delivery of siRNA into primary human cells, paving the way for whole genome functional screens in cell systems which more closely mimic the in vivo human physiology than any animal or secondary cell line.

Viral delivery also provides long-term expression of the siRNA, up to several weeks (Figure 1A), which enables the study of proteins with long half-lives (Figure 1B) and also allows for experiments with longer read-out times, such as those involving morphological or developmental changes. 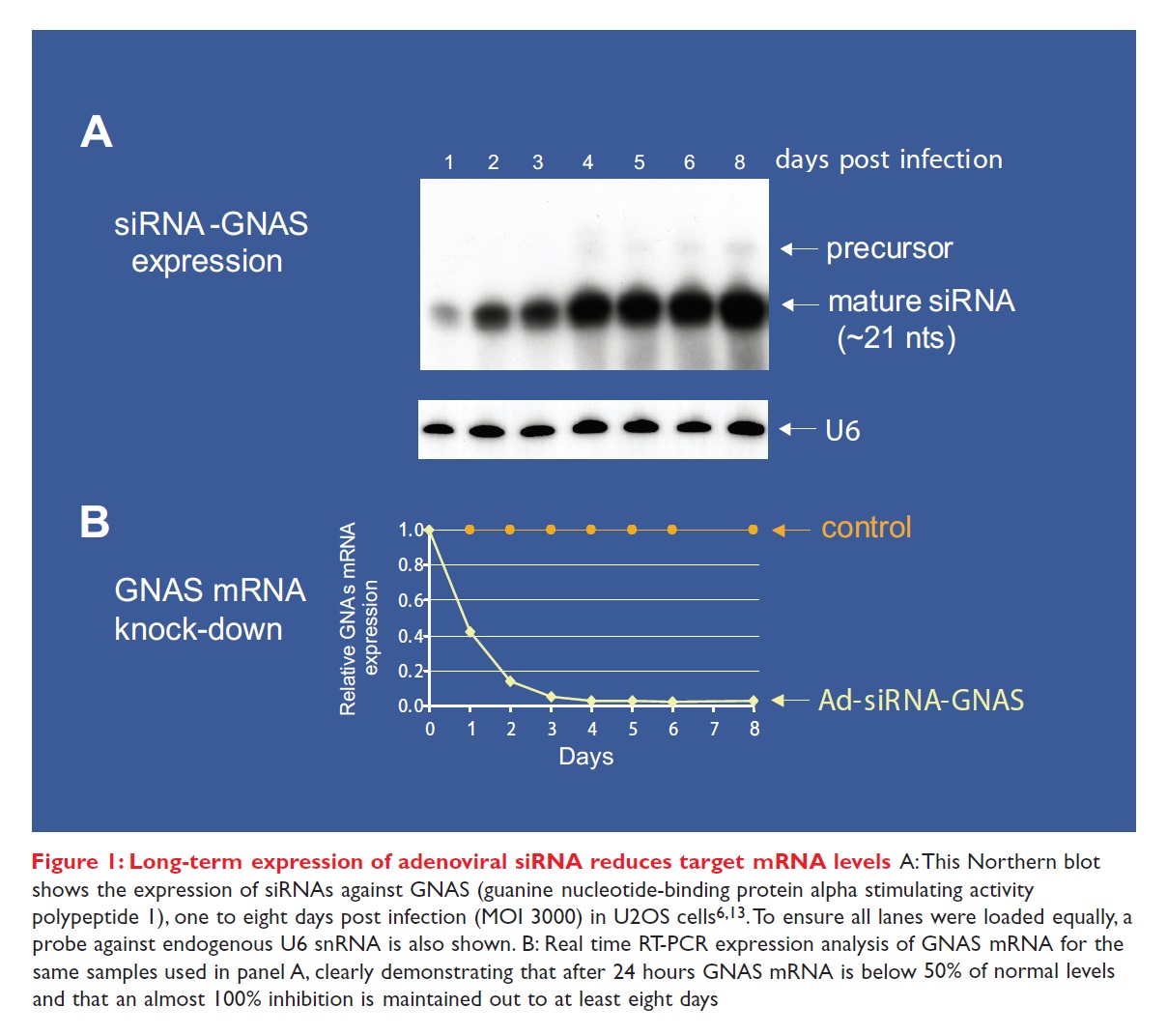 Adenoviruses specifically have the advantage that they do not integrate into the genome (unlike retroviruses and lentiviruses) and therefore there is no risk of altered cell phenotype as a result of genome mutation.

The pharmaceutical industry mostly concentrates its drug discovery efforts on drugable targets, that is those protein classes which have previously been shown to be amenable to the development of small-molecule therapeutics. G-protein coupled receptors (GPCRs), kinases, proteases and nuclear hormone receptors (NHRs) are some of the prevalent classes of proteins that currently have small-molecule therapeutics on the market (7).

Whereas functional screening of the entire human genome may be of significant academic interest, a preferred approach is to concentrate on the drugable genome, therefore increasing the likelihood that any proteins identified as regulators of a disease phenotype are tractable for drug development. Consequently, there are many groups, both commercial and academic, whose offerings and research respectively are focused on this subset of the genome. For example, Ambion, in partnership with Cenix Bioscience, and Dharmacon offer siRNA oligonucleotide libraries to the most popular drugable gene classes, for example GPCRs, kinases and proteases. 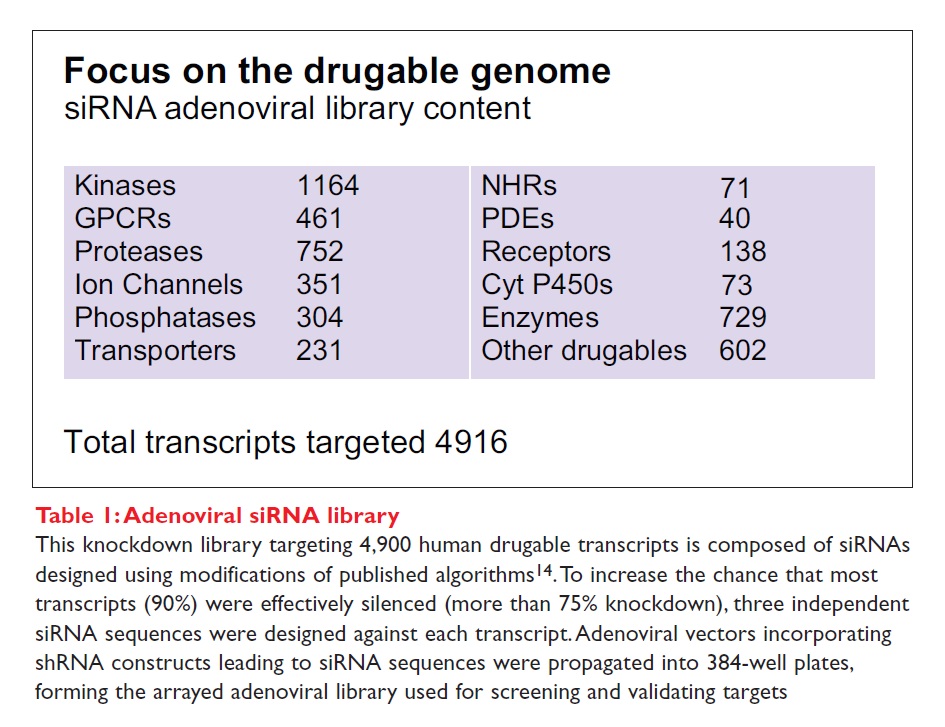 Several high-profile papers within the past year have profiled the use of siRNA screening technologies to discover proteins which regulate key disease pathways. Two such recent papers discuss the use of arrayed, synthetic siRNA to identify kinases involved in cell-cycle control (8) and apoptosis (9) in a human cancer (HeLa) cell line. Additionally, Berns et al demonstrate the use of retroviral siRNA libraries to identify new components in the p53 pathway (10).

Arrayed libraries offer a major benefit in performing genome wide functional screens, since as soon as a hit is identified the gene corresponding to that siRNA is immediately known. In addition, arrayed libraries afford maximum flexibility in assay design. Instead of being limited to selectable phenotypes such as cell survival or flow cytometric analysis, one can design assays optimally suited to the disease under study. Further, the arrayed format enables automation of the assays using standard 96- or 384-well robotics, greatly accelerating the discovery process and reducing cost (11).

In the case study presented below, many of the benefits thus far described, ie use of primary cell systems enabled by viral delivery, focus on drugable genome and use of arrayed libraries have been combined to identify drugable targets involved in osteoarthritis.

Osteoarthritis is the most common form of arthritis and is caused by an imbalance in the degradation and formation of articular (joint) cartilage. Current osteoarthritis (OA) medications focus on treating the symptoms of the disease – pain and secondary inflammation – but few actually preserve cartilage integrity or slow the progression of the disease. It is estimated that in the US alone more than 20 million people are affected by osteoarthritis (12) and the number of cases will only increase as the ‘baby-boom’ generation ages.

As the economic impact of this growing patient group increases, the healthcare industry is in need of therapeutics that will prevent the progression of the disease. The discovery of disease-modifying osteoarthritic therapies is focused on either prevention of cartilage degradation or promotion of cartilage deposition. Since cartilage is produced and maintained by chondrocytes, it is important that these cells remain viable and continue to produce functional cartilage.

Thus, the aim of this project was to identify drugable proteins that regulate transformation of the (de-differentiated) cells that prevail in the arthritic joint, into differentiated, cartilage-producing chondrocytes (Figure 2). Such drugable proteins, which induce anabolic pathways and form stable cartilage in vitro upon siRNA knockdown, are ideal targets for osteoarthritis drug discovery programmes. 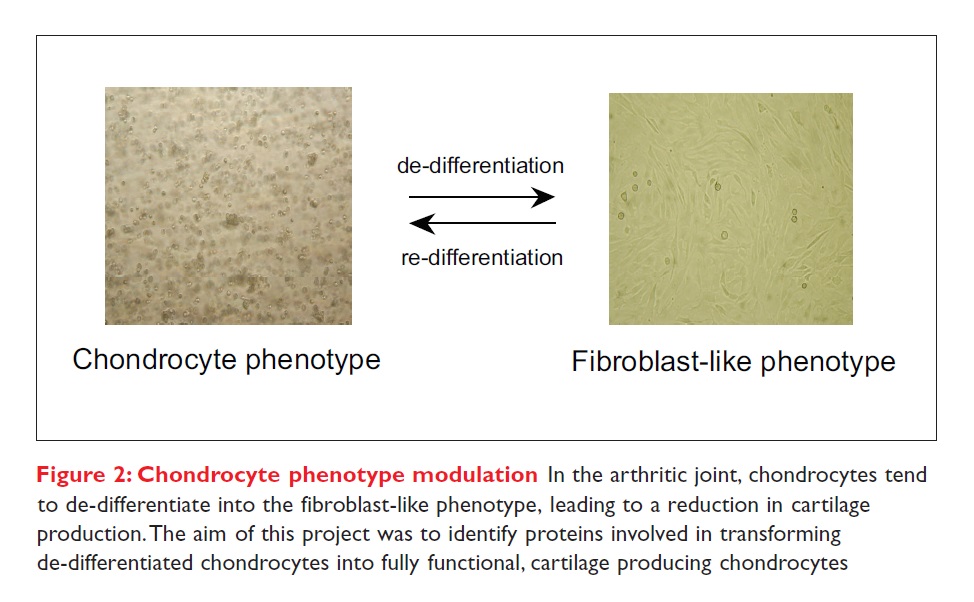 Figure 3 describes the critical path of experiments we performed to deliver validated targets for OA drug development, where hits identified in the primary screen are passed sequentially through increasingly more complex validation assays, in order to identify those whose inhibition truly regulates chondrogenesis and cartilage formation. 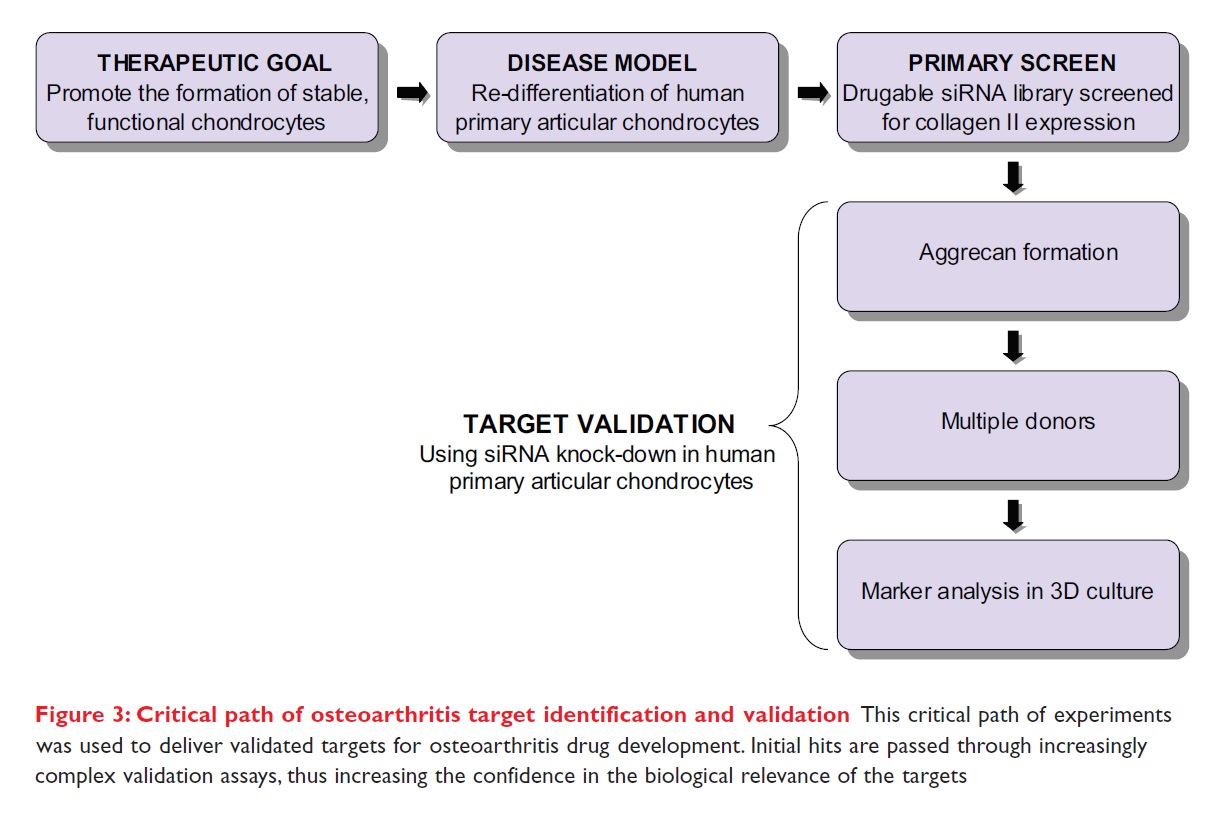 In the primary assay, a collection of adenovirally expressed siRNAs targeting the human drugable genome was screened in normal de-differentiated human articular chondrocytes (NHAC) to identify proteins whose silencing promoted re-differentiation to the chondrocyte phenotype. The induction of collagen II, one of the main components of cartilage, was used as a marker for chondrogenesis (Figure 4). 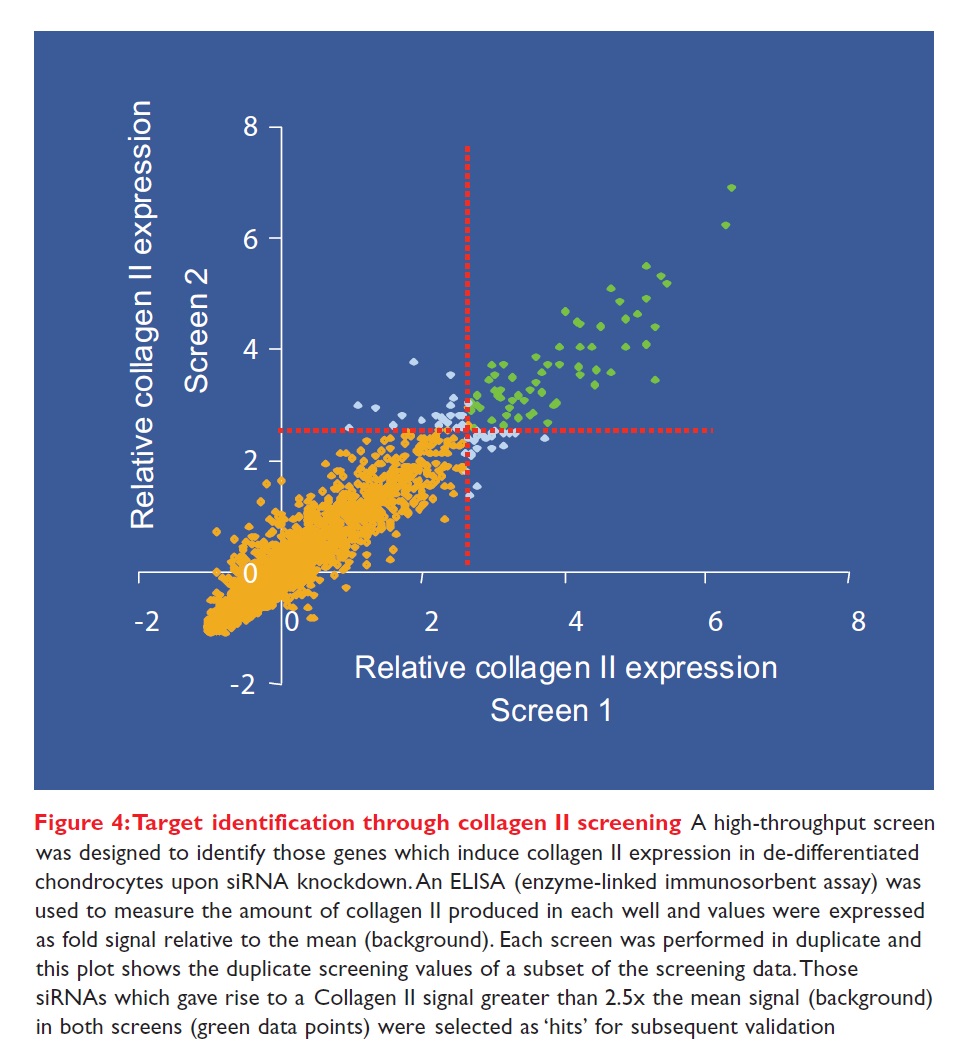 After initial hits were identified, several additional validation steps were used to further increase the confidence in the biological relevance of the targets. The first of these validation steps was to test the ability of the chondrocytes in 2D culture to produce aggrecan upon siRNA inhibition of the hit proteins.

Formation of aggrecan is an early structural indicator of the chondrocyte’s ability to produce normal, structural intact cartilage. Of the 274 hits identified from the collagen II assay in the primary screen, 97 formed stable aggrecan, including 10 GPCRs, 25 kinases, 19 proteases and one NHR, as assessed by quantitative Alcian Blue staining (Figure 5). 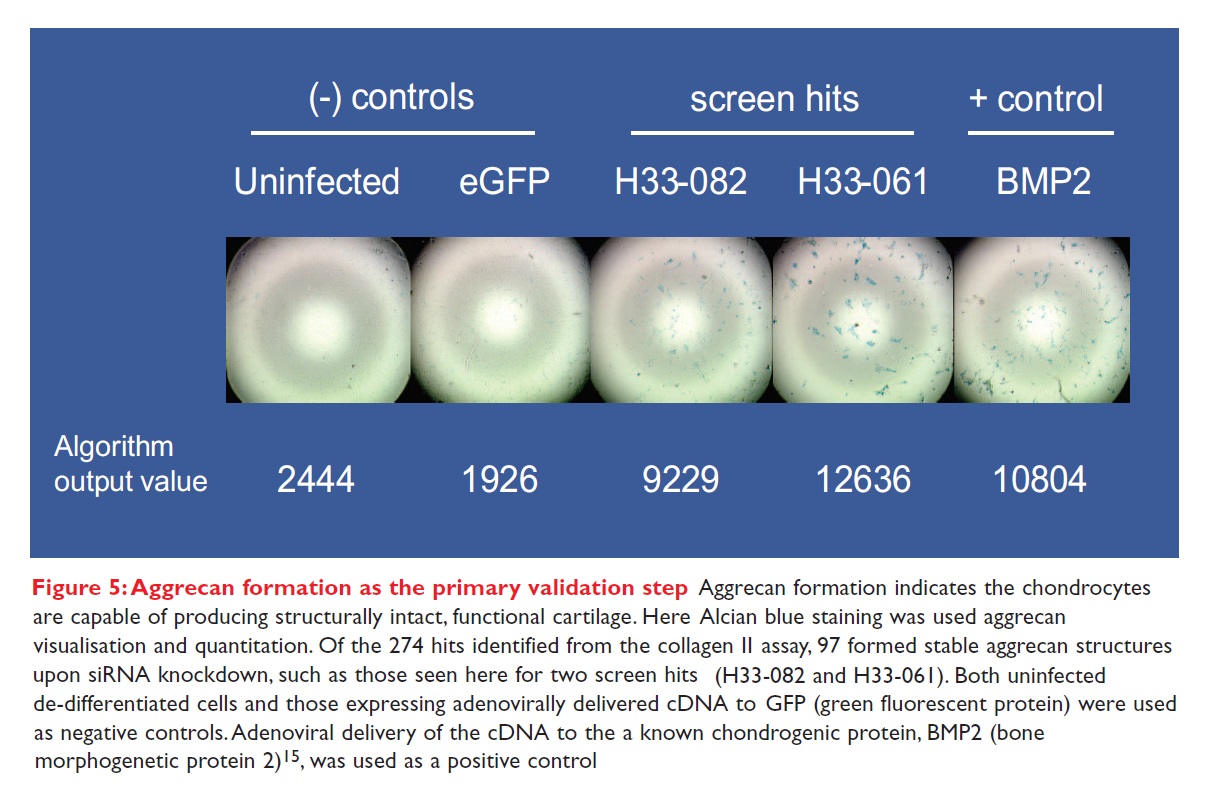 Thus far, the validation of the putative targets had been performed in two-dimensional primary cell culture conditions. Since chondrocytes exist in the human joint in a 3D matrix, the complexity of the OA model was further increased to test if the proteins still promote the formation of the chondrocyte phenotype in a 3D cell culture model. Several gene markers, such as Col II and FGFR- 315, have been established as indicators of the functional chondrocyte phenotype.

Similarly, several markers exist for specific phenotypes that are unwanted effects in the disease pathology, for example bone hypertrophy (Col X) (16), degradation (MMP13) (17) or de-differentiation (Col I, Col III). Figure 6A illustrates the markers for desirable and undesirable phenotypes in functional chondrocytes. Adenovirus expressing siRNA to the 97 hits that induced aggrecan formation in 2D culture were infected into 3D alginate chondrocyte cultures and RT-PCR marker analysis was performed to verify that the marker profile upon target knockdown matched the expected profile for a functional chondrocyte (Figure 6B). 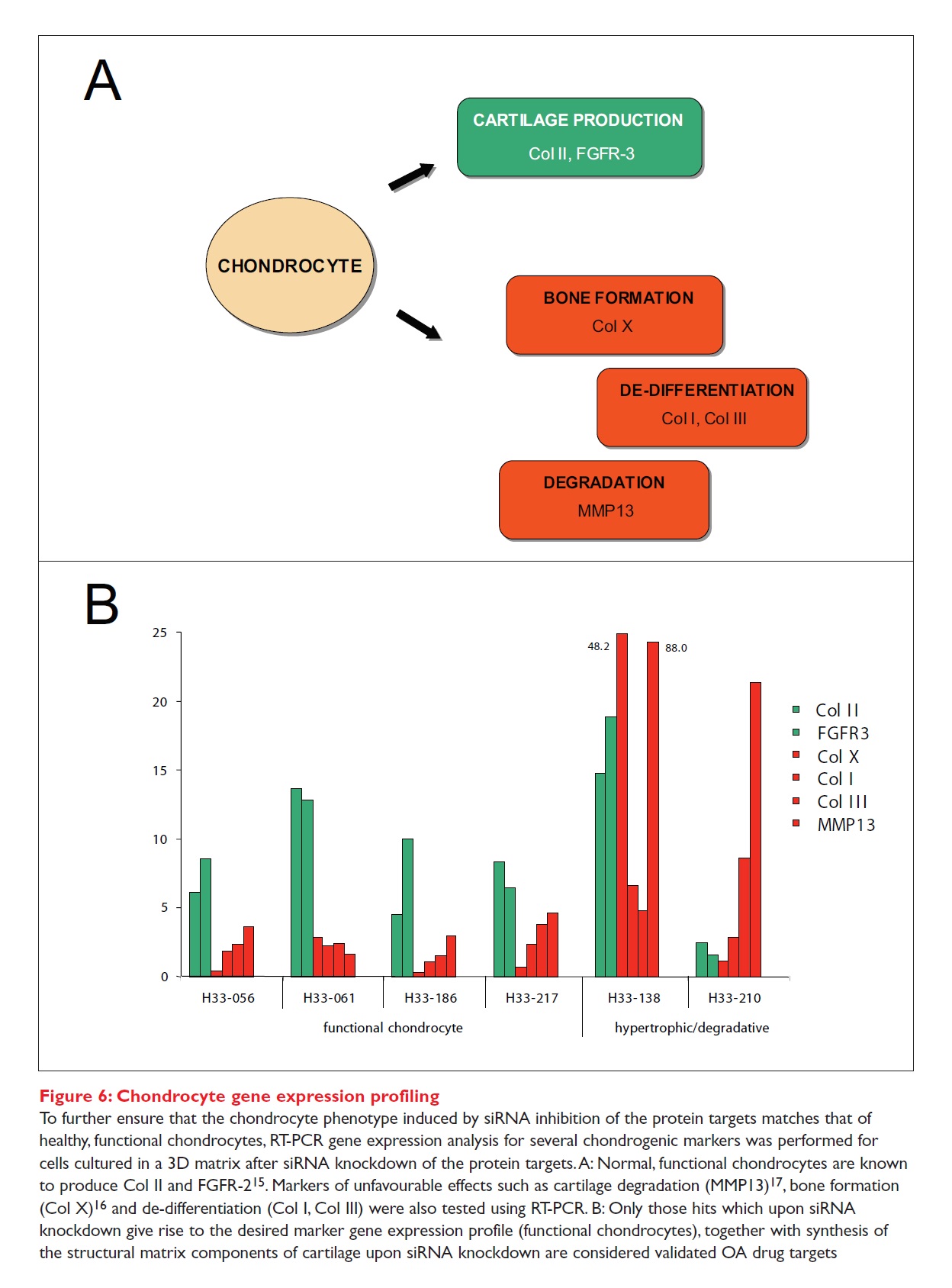 The ability for these cultures to synthesise key structural components of cartilage (for example GAG and hydroxyproline) upon target knockdown, was also tested and used to further prioritise the targets.

Figure 7 summarises the series of critical path experiments described for this example of OA target validation and the number of validated targets at each step. 22 targets had the desired marker profile for functional chondrocytes and induced the synthesis of structurally intact cartilage proteins. Thus, by combining siRNA technology with disease relevant primary cell biology, it is apparent that antagonism of these 22 targets induces chondrogenesis and cartilage formation in vitro. 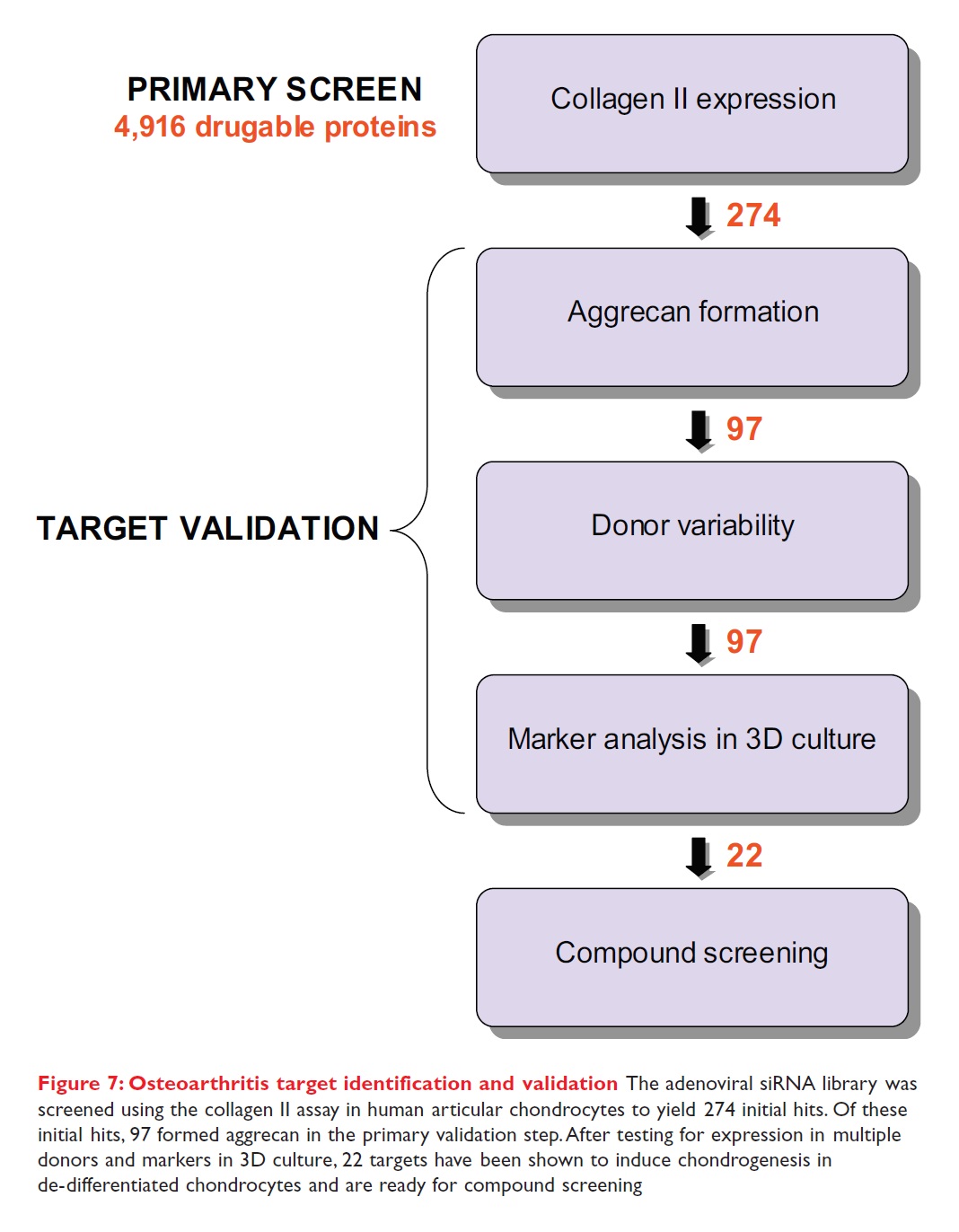 This powerful functional validation together with published annotation of the protein targets, such as gene expression profiles in human tissue and chemical tractability, enables the delivery of validated, novel targets into OA drug discovery.

For each of these disease areas, key disease pathways are functionally screened using siRNA knockdown and subsequent, increasingly complex validation assays are performed in clinically relevant models to identify novel protein targets. Validation studies have included detailed pathway analysis and measurement of phenotypic markers; use of ex-vivo models such as cartilage explants for osteoarthritis, and the calvarian skull model for osteoporosis; and confirmation of gene expression in relevant tissue by mRNA in situ hybridisation and immunohistochemistry.

In each case, the entire human drugable genome was successfully screened in human primary cell systems and delivered to a small number of novel, drugable protein targets that strongly regulate key disease pathologies upon siRNA based inhibition. Clearly, this is a broadly applicable technology that has delivered novel, highly validated, drugable targets into compound screening in five disease areas in less than 12 months.

The discovery of siRNA has revolutionised functional genomics making it possible to quickly mine through the entire human genome to identify the few proteins that are key regulators of disease. Recent technological advances in siRNA delivery and high-throughput screening extend the usefulness of siRNA to target discovery research. Using a combination of these techniques, it is now possible to rapidly screen a large number of drugable targets in human primary cells to identify and validate drug targets for a wide range of under-served disease areas.

Frits Michiels, PhD is Group Leader at Galapagos, responsible for the OA programme.

Nick Vandeghinste, PhD is Research Scientist at Galapagos, responsible for assay development in both the OA and RA disease areas.

Peter Tomme, PhD is Laboratory Director at Galapagos and oversees target discovery and validation across the Alzheimer’s, RA and osteoporosis disease areas.

Helmuth van Es, PhD is Director of Cellular and Molecular Biology at Galapagos and oversees target discovery and validation across the OA and asthma disease areas.