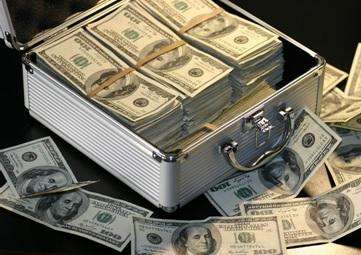 Three years ago, when biotech was at its Wall Street heights, personalised medicine and its promise were on everyone’s lips. Billions of dollars were being put to work to make targeted medicine a reality… and genomics was the solution.

With the completion of sequencing of the human genome, expectations were high. Genomics was expected to drive efficient discovery and development, and lead us to personalised medicine, the holy grail of healthcare.

Among the tip of the coming iceberg of drugs in this class are the breast cancer drug Herceptin (targeted to the overexpression of the HER-2/neu gene), Gleevec for Chronic Myeloid Leukemia, Strattera for attention deficit hyperactivity disorder, anti-cancer mab Iressa, and AIDS medications and treatment regimen that takes into account specific patient viral loads for diagnosis and treatment.

Customised medicine couldn’t arrive any sooner. But pharmaceutical and biotech companies, together as an industry, are going through a difficult transition. Blockbuster drugs which have led pharma to record revenues in the past five years are moving quickly toward patent expiration, revenue erosion from generics and intense competitive pressure from new therapies in every indication. In working to innovate, pharma companies have been increasing their research and development expenditure in line with growing revenues. R&D spending now averages more than 15% of sales.

This growth in expense, however, has not led to a commensurate increase in drug approvals. Since 1996, there has been a decrease in the number of new drug approvals, even as pharmaceutical companies pour more money into research and development. New molecular entity (NME) approvals in 2002 were five from the world’s 10 largest pharmaceutical companies – fully half of 1998’s total. In short, it has been a tremendous learning curve for the industry.

In 2002, the ‘innovation gap’, or cost of the learning curve expressed in the difference between the money spent and the number of new drugs approved, was the largest it has been in 15 years for the industry as a whole. Just last year, pharma spent $32 billion in R&D, but received approvals on only 25 new drugs. The $32 billion was double what the industry spent on R&D in 1997, and three times the sum spent in 1992. 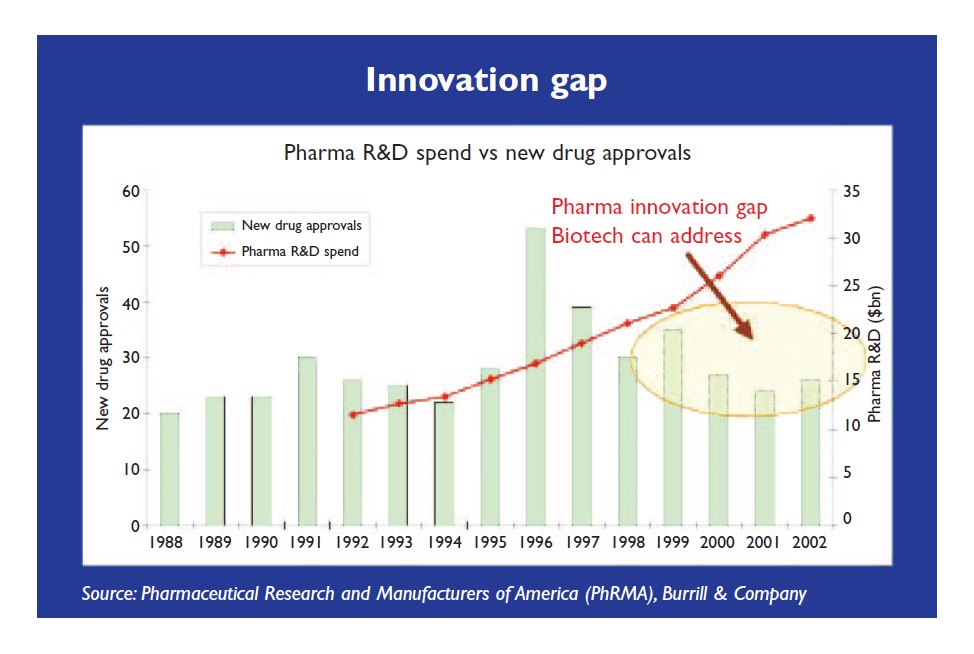 So, why haven’t pharma and its newly found excitement with biotech, and these new tools been more successful? The answer is complex. In part, the explosion in genomic, proteomic, metabolitic, toxicogenomic and other information and huge increases in computing power that led to the mapping of the human genome has enabled researchers to dig deeper into our understanding of disease… and its complexity. At the same time, the increase in information has also empowered the Food and Drug Administration to ask better and tougher questions of the drugs that it reviews.

According to the 2003 Tufts Center for the Study of Drug Development, the FDA review times have gotten shorter over the years. It would look like the FDA is becoming more efficient, but the time it takes to develop drugs overall is going up. In the most recent 40 year history of the pharma industry, we’ve gone from development times of seven years and a cost of $200 million to $1 billion and 15 years… reverse progress.

In short, where is the beef? Where is the benefit from all of this ‘whiz-bang’ technology? There has been a great deal of effort to find and validate new therapeutic targets, but precious few new drugs to show for it. The beef, ultimately is in personalised medicine or theranostics – an amalgam of therapeutics, diagnostics and information – where the industry can ultimately get to the translation of genomic and proteomic data and patient responses.

The transition from general patient population testing in proof and in the clinic to a tailored approach will mean higher chances for success in drugs. It is here that the patient individuation can lead to better selectivity in clinical trials, thus ensuring better selection criteria for patient responders, and an increased probability of the drug’s efficacy. It may sound like science fiction, but for some drugs, it is already here. 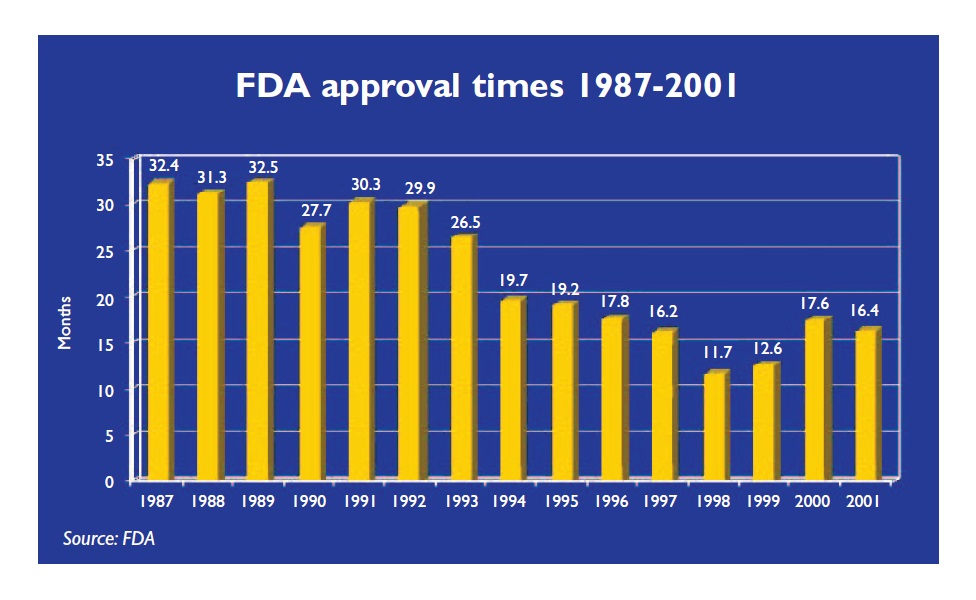 From a regulatory standpoint, the FDA is also in transition. Largely built to adjudicate risk in a single drug-single indication model, the FDA is beginning to acknowledge that we live in a polypharmacy world with dramatic genomic and phenomic differences. No longer are drugs being distributed to narrower and narrower sets of patients for single indications, but are instead being given to wider and wider groups for expanding indications. The approval most drugs received at one time was for select patients with selected indications, not the larger population. Patients on these subsequently approved drugs are also on multiple drugs. Whoever the classic clinical patient was for an approved trial, we, as patients, are something else.

In November, the FDA began to work towards developing rules based on submissions of drugs (BLAs and NMEs) that will include pharmacoge-nomics information about patient populations. These guidelines will clarify when the FDA will require genetic testing as a component of trial design and data gathering, and is expected to use this data to determine safety and efficacy… and approvability.

This is a major step toward a brave new world for the FDA, but one that is not so far in the future. As the industry brings forward more drugs built from differential genomic data for smaller and specialised populations, we are going to need to see reasonable change in the regulatory processes as we move these into larger patient populations. We may no longer see the FDA use the Phase III as the finish line, but instead will see more Phase IV (post-approval risk monitoring) with an increase in the Phase III approvals with restrictions and conditions. Phase III may end up more like a conditional approval. The FDA and the medical community will then track that Phase IV information more closely to see how the drugs work in larger populations, adjusting labels and/or recalling approvals.

In this new environment, the FDA is adjusting the risk-benefit quotient for patients so patients and medical providers will better understand the risks of new medicines. Regulators must become less of an adjudicator of risk and more of a translator of risk. It may mean more recalls. It will result in frequent changes to labels and should decrease the cost and reduce the time of drug development, and will speed the path for beneficial therapies to find their patients. It will increase the amount of work in following a patient’s response. Medicine built on specific patient data will, without doubt, drop the price of innovation. It will also drop the risk of Adverse Drug Reactions (ADRs). Each year, as many as 7% of all patients, or 2.2 million in the US, experience non-fatal ADRS and as many as 106,000 per year are fatal. It is the fourth leading cause of preventable death in the US. 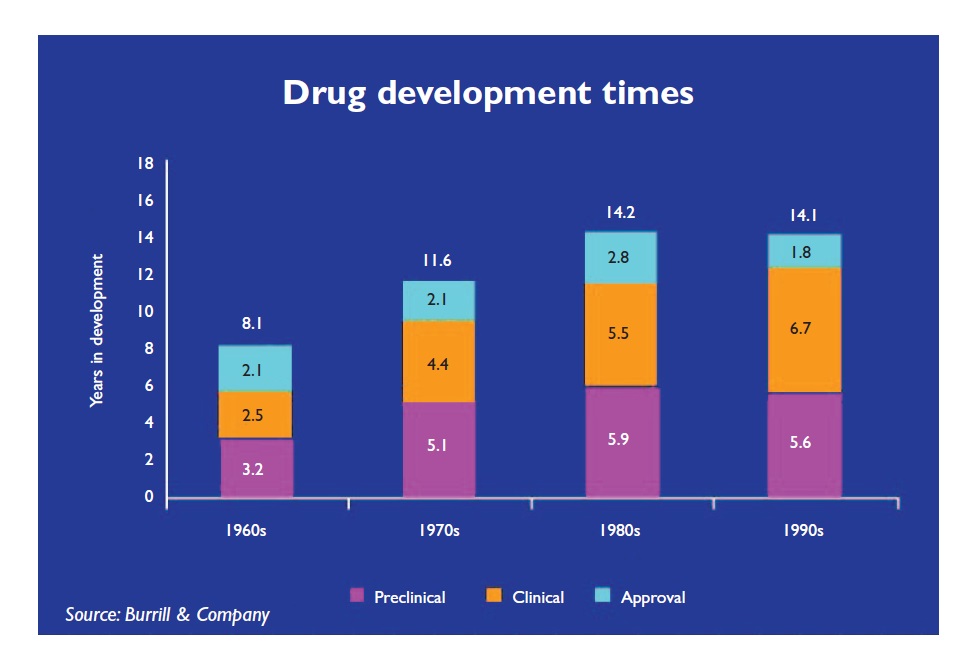 Personalised medicine challenges the very thrust of blockbuster-ology. Blockbuster drugs become billion- dollar sellers for the pharma industry: their economic base a relatively short period of their approval, these drugs are applied to large patient populations, examples being Viagra, Prozac, Cipro, Prevacid and the like. However, we are about to see the pharmacoeconomic model change.

The pharma industry will move from multi-billionselling drugs to treat major disease categories (such as heart disease or cancer), will instead become providers of treatment in a single disease class, such as prostate cancer, lymphoma or breast cancer instead of oncology, and even more specifically to certain forms of these diseases implicated by certain genetic permutations. The integration of genomic information into drug design, using personalisation as a basis for diagnosis and treatment, will make the firms horizontally, instead of vertically integrated.

Targeted pharmaceuticals and biologics such as Iressa, Herceptin and Gleevec are promising, and the FDA has responded with regulatory review times that have been among the shortest for any drugs. Marketplaces have also responded quickly. Targeted solutions do work for the betterment of healthcare by reducing the cost and time of development, and time to market.

As we better understand the body as a biologic system (systems biology), there will likely be fewer ‘one size fits all’ aspirin-type drugs that perform well for many patients, and instead we will see more treatment of the patient and the disease. We’ll move from largely treating the symptoms of disease to treating the disease itself, and even more importantly, the emergence of disease. It is not just changing the healthcare paradigm, it is changing life itself. DDW

This article originally featured in the DDW Winter 2003 Issue

G. Steven Burrill has been involved in the growth and prosperity of the biotechnology industry for 35 years. He currently serves as Board Chairman for Paradigm Genetics (NASDAQ: PDGM) and Pyxis Genomics and as a Board member of Catalyst Biosciences, DepoMed (AMEX: DMI), Galapagos Genomics, Inhibitex (observer), Targacept and Third Wave Technologies (NASDAQ: TWTI). Prior to founding Burrill & Company in 1994, he spent 28 years with Ernst & Young, directing and co-ordinating the firm’s services to clients in the biotechnology/life sciences/high technology/manufacturing industries worldwide. In 2002 Mr Burrill was recognised as the biotech investment visionary by the prestigious Scientific American magazine (The Scientific American 50). He is a founder of the Foundation for the National Medals of Science and Technology and serves on the Boards of the Bay Area Bioscience Center, the Bay Area Science Infrastructure Consortium, the California Healthcare Institute, the Exploratorium and the Kellogg Center for Biotechnology. Mr Burrill is also on the Advisory Boards of the University of California, San Francisco (UCSF) Foundation, the University of Hawaii Medical School and the University of Wisconsin Foundation. He is a member of The World Bank’s ‘Out of the Box’ group as well as an adjunct professor at UCSF.