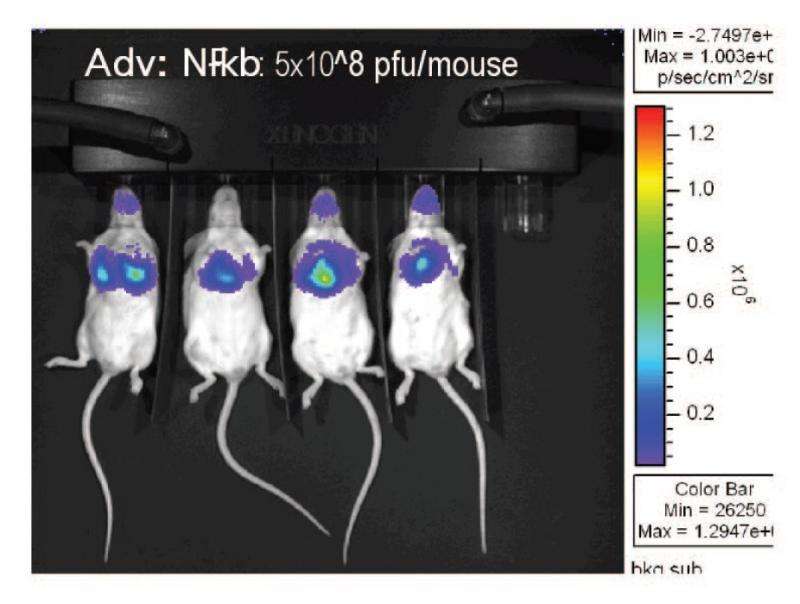 In today’s pharmaceutical research and development environment a major problem is the transition of too many drugs to later stages of development with insufficient and/or inadequate information (eg efficacy, dosing), resulting in high attrition and consumption of resources.

One solution to this dilemma is to introduce and implement Translational Research Plans with state-of-the-art tools and methodologies to bridge Preclinical Discovery and Clinical Development in early Phases (I and IIa) to improve success in Phases IIb and III.

To enable clear, scientifically-driven ‘Go’/‘No-go’ decision making, the pharmaceutical industry must ensure effective integration of modern methodologies and tools (eg biomarkers/bioimaging and pharmacogenomics) into early Clinical Development Plans (eg from first in man [FIM] to proof of mechanism [POM]/proof of concept [POC]).This article will focus on how pharmaceutical companies can incorporate biomarkers into early discovery research in a number of therapeutic areas, including asthma, rheumatoid arthritis and multiple sclerosis.


As an offshoot of the National Institutes of Health (NIH) Food and Drug Administration (FDA) conference on biomarkers held in 1999, the NIH Definitions Working Group defines a biomarker as a characteristic that is objectively measured and evaluated as an indicator of biologic processes, pathogenic processes or pharmacological response to a therapeutic intervention (1).

According to the Global Experimental Medicine group within Aventis, a biomarker is defined as an exploratory tool that contributes to, and enables, Go/No-go decisions in pre-clinical and early clinical phases of drug development. Examples include ‘activity markers’ used in proof of mechanism/concept studies and toxicity markers. Based on these definitions, biomarkers can be used to brid ge preclinical to clinical studies.

Biomarkers in studies of asthma

Asthma is a chronic inflammatory disorder of the airways superimposed on structural changes that include an increase in smooth muscle and airway wall remodelling. In addition to a background of chronic cytokine and mediator release, asthma is characterised by considerable variations in airway function brought about by interactions with the environment, including allergen exposure. As such, asthma is a disease process that is well suited for the application of biomarkers in preclinical and early clinical studies. Examples of lung function biomarkers that can be monitored in asthma include: spirometry (eg FEV1, PEF, FEF25-75), airway hyperresponsiveness, allergen challenge and exercise-induced bronchoconstriction.

In asthma studies, inflammatory markers also are of key importance. Some of these biomarkers for asthma could include: induced sputum, lung biopsy samples, concentrations of cytokines and various inflammatory proteins, and exhaled air contents (eg, nitric oxide levels). Airway remodelling is another hallmark of asthma, and some makers of airway remodelling can include collagen, growth factors concentrations and presence of certain cell types. 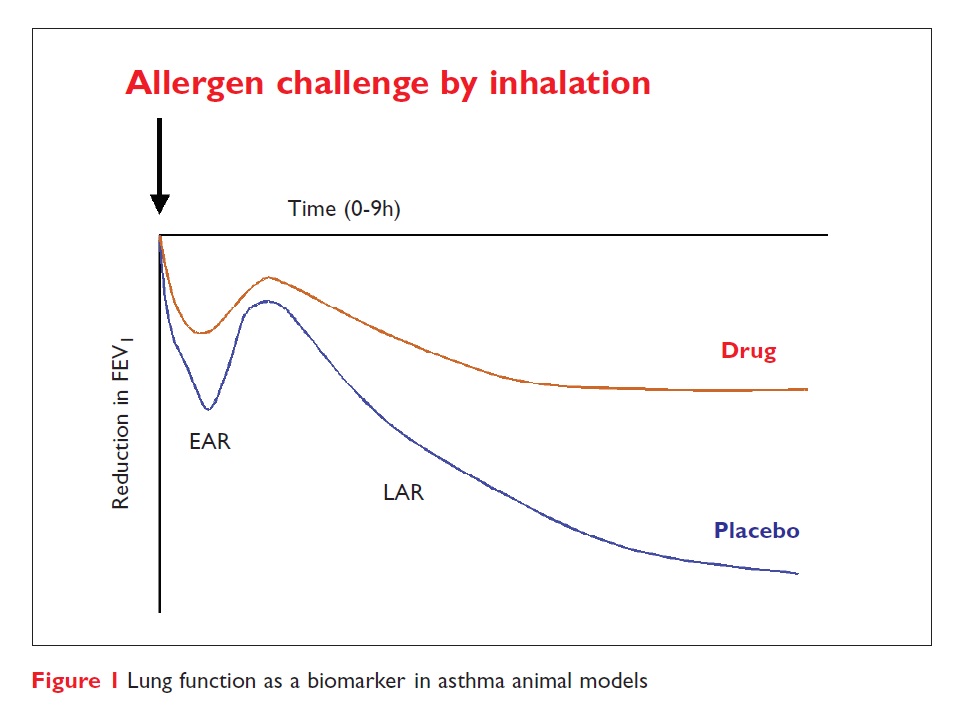 An example of how counts of cell types can be used as a biomarker in asthma studies includes the morphometric measurement of eosinophil influx in mouse lung. Eosinophils are quantified through the use of Congo red staining. In this type of study the number of eosinophils in the lung are expressed as the number of cells per unit area of lung section.

Another biomarker that can be investigated in asthma animal models includes goblet cells and the storage of mucin in these cells. To study this biomarker, the volume of stored mucin in goblet cells is compared in drug-treated versus vehicle-treated airway epithelium. In these studies, periodic acid-Schiff (PAS) staining is used to quantify mucin. This measure can be expressed as volume of mucin per surface area of basal lamina of airway epithelium. 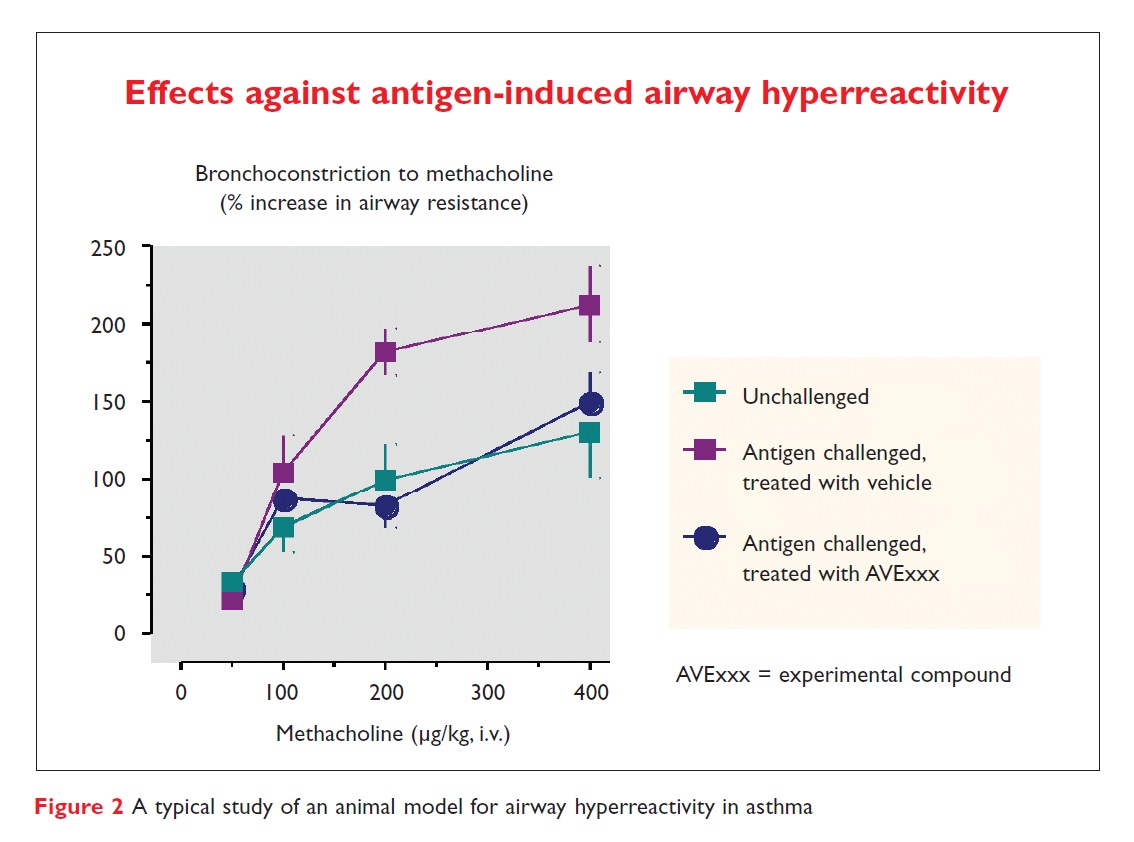 Once animal models have been evaluated through the use of biomarkers, a compound will then move into early clinical development. Biomarkers can be extremely useful in early clinical studies of asthma and may be the basis for Go/No-go decisions. Figure 3 shows a flow diagram of the biomarkers that are investigated in Phase I and IIa studies. 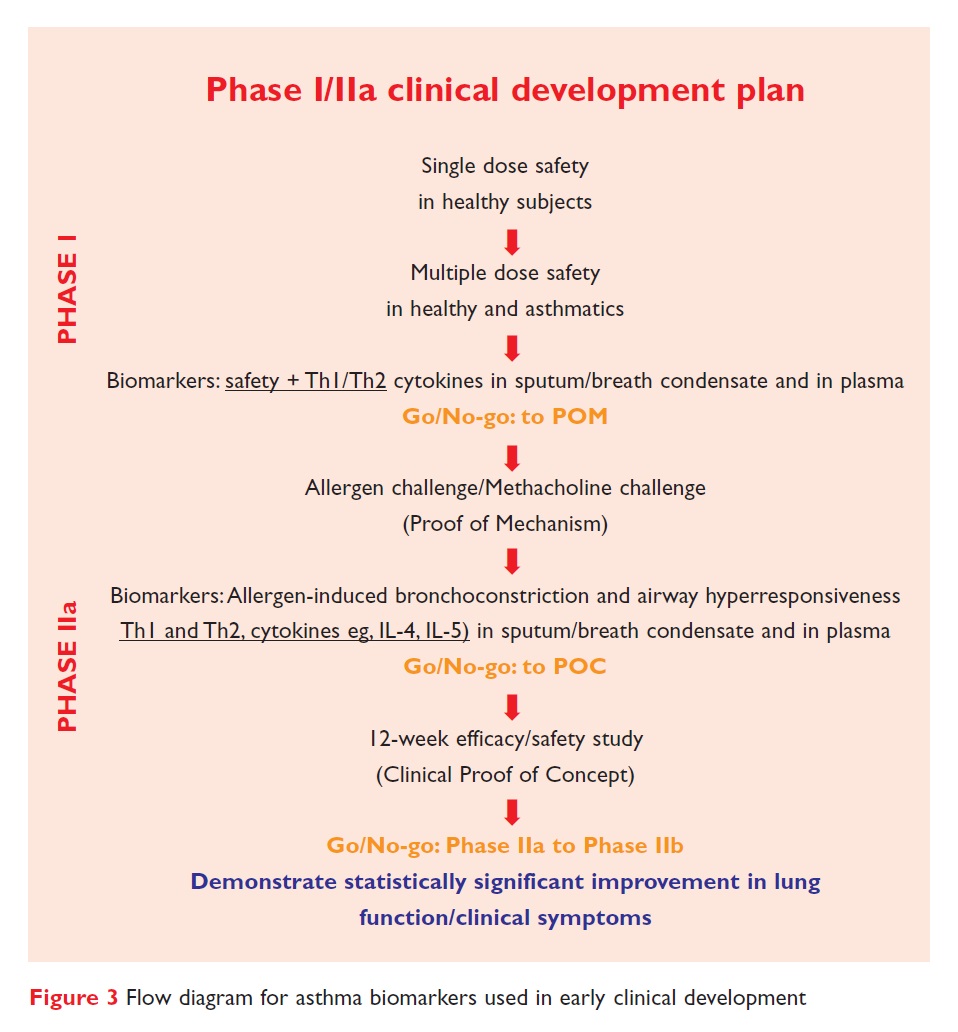 Typical biomarkers in Phase I studies of asthma include the Th1/Th2 cytokine profile found in sputum and breath condensates or in plasma. Moving into Phase IIa asthma studies, biomarkers of importance include allergen-induced bronchoconstriction and airway hyperresponsiveness. The levels of cytokines such as interferon-gamma, interleukin- 4 and interleukin-5 in sputum/breath condensate or in plasma also can be measured in Phase IIa studies to complement efficacy and safety data.

Biomarkers in studies of rheumatoid arthritis

Rheumatoid arthritis (RA) is a chronic inflammatory disease characterised by synovial membrane hyperplasia with immune cell invasion and destruction of cartilage and bone. While no definitive biological marker exists for the diagnosis and prognosis of RA, the levels of some biomarkers such as cytokines, proteins, etc can potentially reflect the inflammatory state in joints. Thus, like asthma, drug development for RA is making greater use of biomarkers.

A number of cytokines (eg TNF , interleukin-1) are overproduced in RA and their levels can be useful biomarkers. Other biomarkers in RA include levels of acute phase proteins such as C-reactive protein (CRP), the erythrocyte sedimentation rate (ESR), concentrations of enzymes that promote inflammation such as the kinase NF-kB, and improvements in scores on scaling systems that reflect a number of variables including the number of joints affected, the function of joints and other factors. 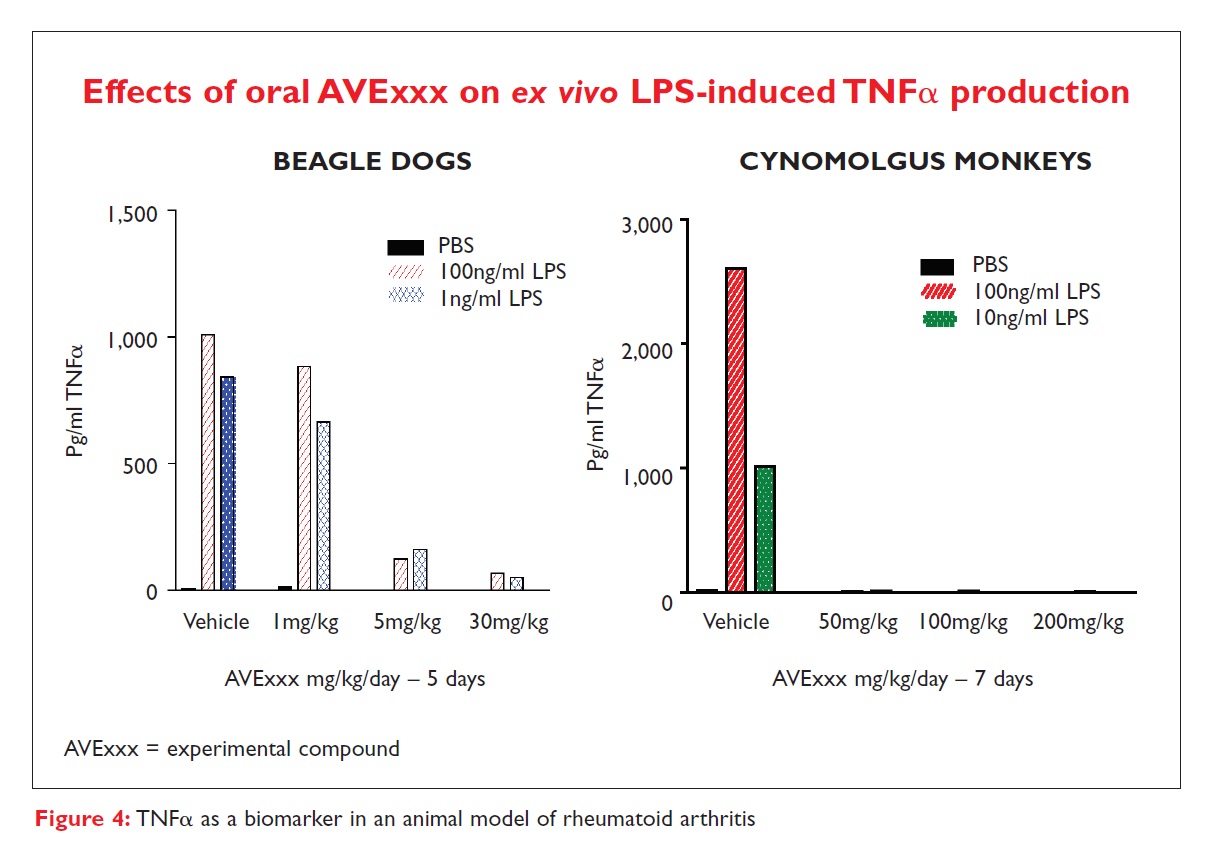 Enzymes called NF-kB kinases have been identified as especially attractive targets for new therapeutics because of their role in stimulating inflammation. Inhibitors of these enzymes have been shown to suppress arthritis disease symptoms in experimental animals. These enzymes also are involved in many normal cellular functions, which creates a challenge for developing effective, safe therapeutic interventions that target specific molecules. Current research that uses NF-kB as a biomarker will facilitate the discovery of truly selective kinase inhibitors and reduce the risk of undesirable side-effects.

Figure 5 demonstrates the use of NF-kB as an imaging biomarker in an animal model of RA treated with the steroid dexamethasone. 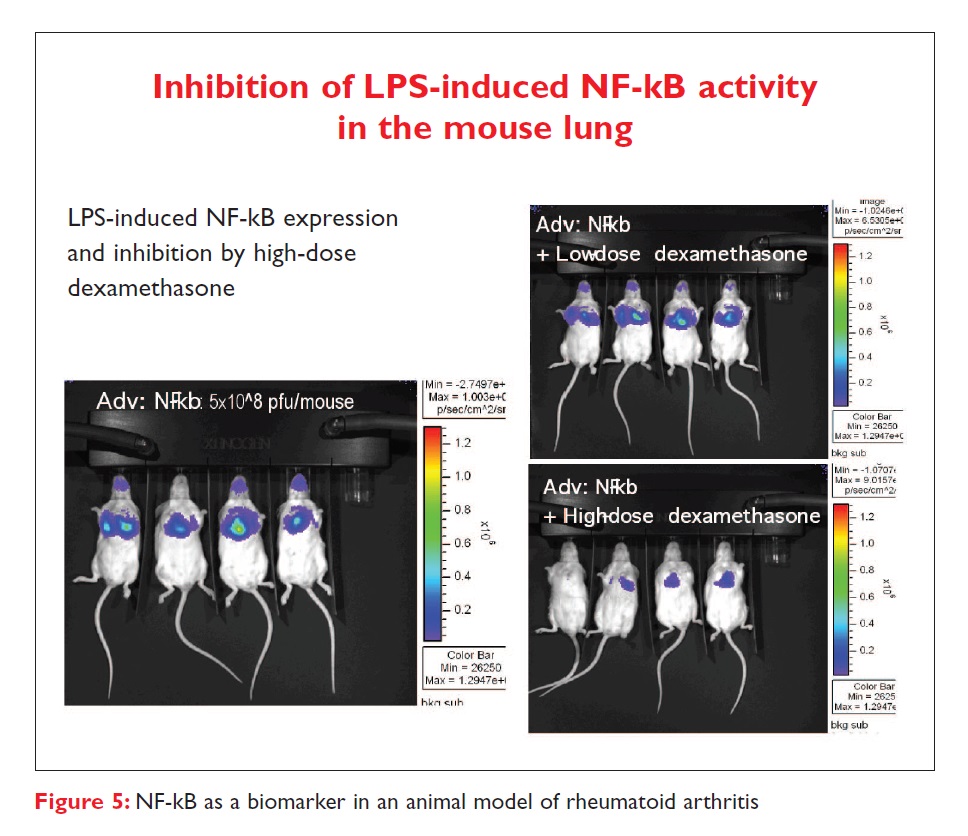 To test NF-kB responsiveness to the steroid, dexamethasone was administered at different dose and time points. Animals were challenged with LPS and then imaged two hours after LPS challenge. The result shows that NF-kB is not responsive to dexamethasone in a regular (low) dose whereas a very high dose demonstrated efficacy in reducing levels of NF-kB.

As with asthma studies, the use of biomarkers in preclinical RA studies can be used as a bridge to clinical studies. Figure 6 gives a flow diagram of the biomarkers used in early clinical studies of RA. Phase I studies rely on cytokine levels such as TNF and interleukin-1 (IL-1). 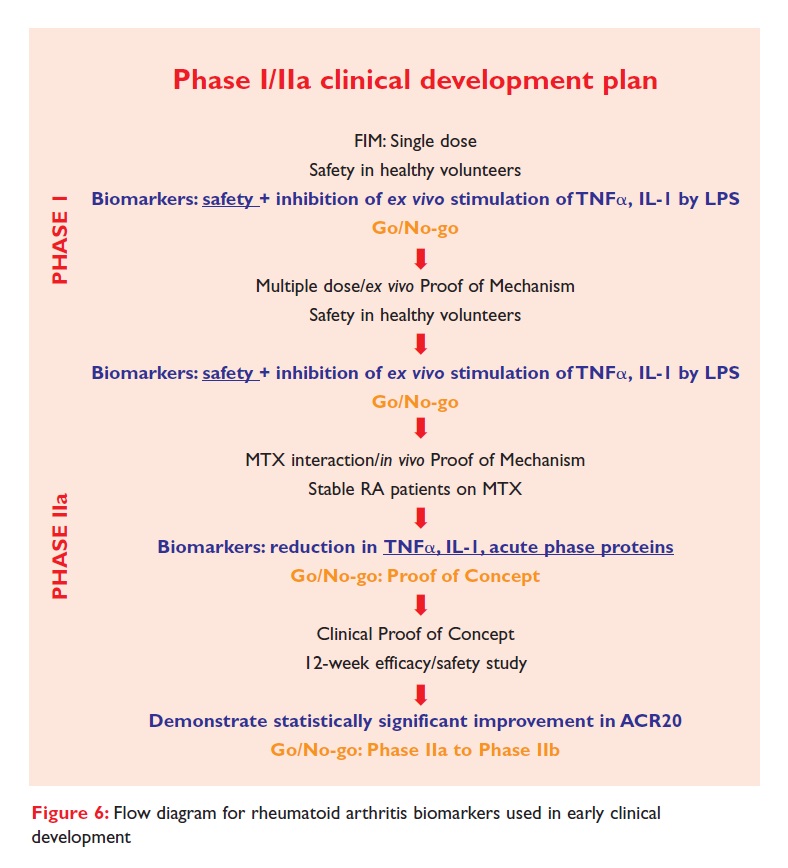 When progressing into Phase II studies of RA, the levels of cytokines and acute phase proteins are investigated followed by measuring patient improvement through scaling systems such as the ACR20.

Biomarkers in studies of multiple sclerosis

Multiple sclerosis (MS) is a complex disease, as several pathophysiological processes (including inflammation, demyelination, axonal damage and repair mechanisms) participate in the disease process. Macrophages are thought to be a significant component in the inflammatory disease process of MS. The level of macrophage trafficking can serve as a biomarker in animal models of MS.

An example of the use of macrophage tracking as a biomarker for MS is shown in Figure 7. 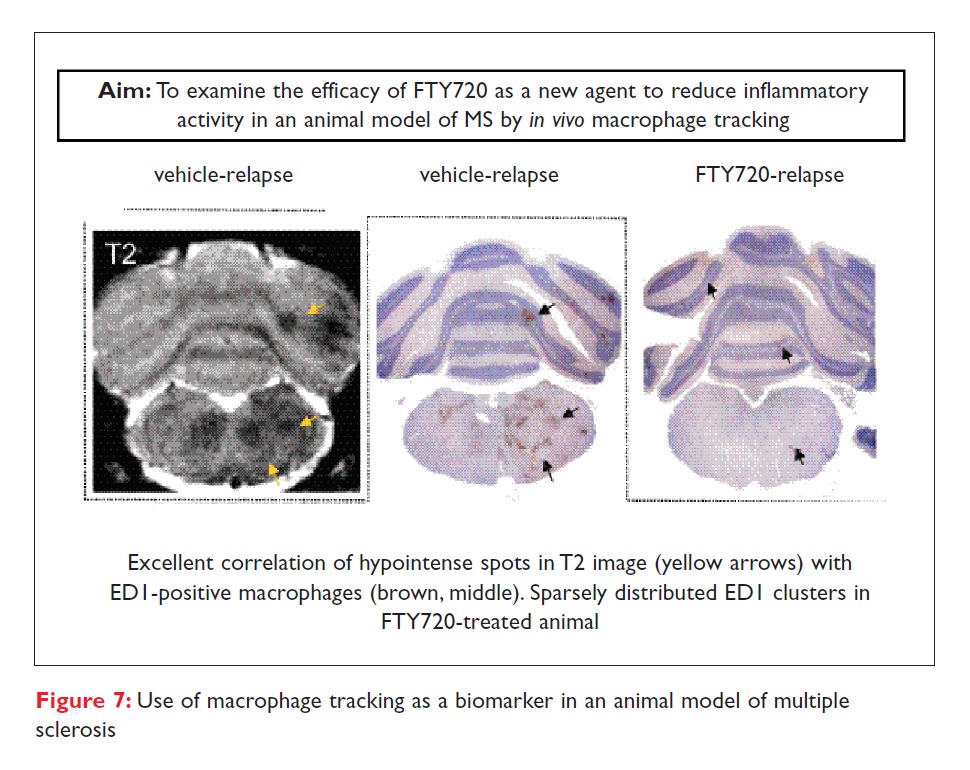 FTY720 is an experimental agent being investigated to reduce inflammation in MS2. A study was conducted in a mouse model of MS to examine the efficacy of FTY720. In vivo macrophage levels in brain tissue were used as a biomarker to determine efficacy. Mice treated with FTY720 showed reduced levels of macrophage clusters compared with those treated with vehicle alone.

Biomarkers in Translational Research Plans can bring added value to preclinical and early clinical development programmes. Biomarkers can be used as indicators of a number of factors that impact early drug development, and Table 1 lists some of the important indicator functions of biomarkers in pharmaceutical development. 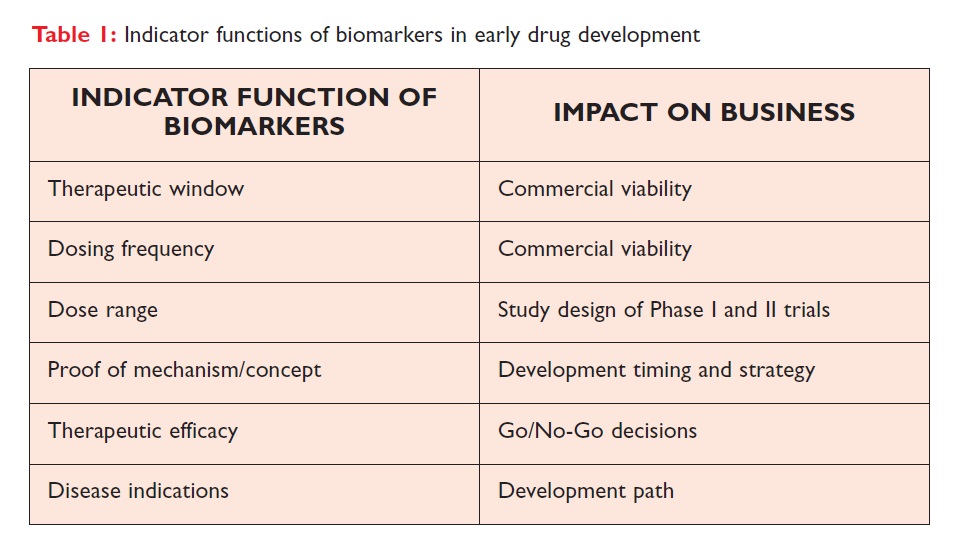 To fully realise the potential of biomarkers to aid in drug development, industry must implement best practices for Biomarker Development. The industry must promote early development and use of biomarkers in Translational Research Plans (Bridging Strategies) throughout the pipeline. This will enable ‘fast to patient’/‘fast in patient’ via a ‘proof of mechanism/ concept’ approach and robust data driven decisions.

In the long run, the use of biomarkers that reflect the targeted process such as those in asthma, RA and MS can select for the appropriate patient population in which the targeted process is prevailing and can help to expedite screening of therapeutic agents in the early phase of their development. Thus, earlier use of biomarkers can potentially increase innovation and productivity and result in more competitive labelling for new, marketed drugs.

Robert K. Dix, PhD, FCP is currently Head of the Experimental Medicine (EM) group at Sanofi- Aventis. EM is responsible for ensuring that the appropriate Translational Research Plans (eg, bridging strategies) are in place for compounds coming from pre-clinical and transitioning to man (eg, Clinical Pharmacology). This involves close discussions between pre-clinical pharmacologists and clinical pharmacologists to make certain that the animal models being employed pre-clinically for compound development utilise the appropriate biomarkers (eg biochemical and bio-imaging) that can bridge between pre-clinical and the Clinic. Dr Dix has been involved in the early phases of drug development in the pharmaceutical industry for more than 25 years. During this period, he has held leadership positions in Clinical Pharmacology and Experimental Medicine. His focus has primarily been involved in early profiling of compounds (with biomarkers and pharmacogenomics as components of Translational Research plans) coming into the clinic to gain early knowledge (eg, proof of mechanism/concept) that will provide important information to improve the probability of success for these drugs selected for further development.