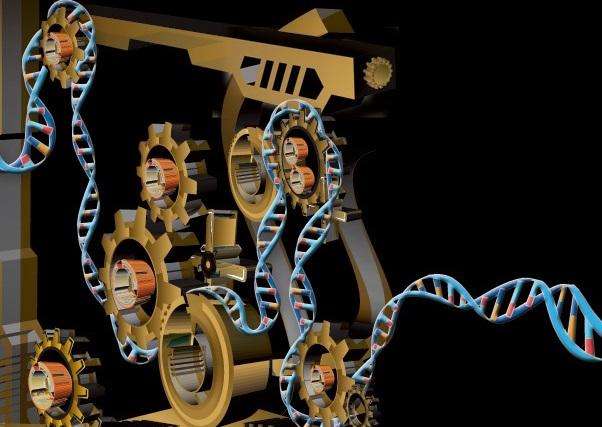 Epigenetics is a term that refers to the durable and context-specific regulation of transcription processes. The majority of epigenetics involves a complex system of enzymes, binding proteins and accessory proteins that control access to the genome by transcription factors and other parts of the DNA replication machinery.

The role of epigenetics in development and in disease processes is only beginning to be understood, but a clear link has been established between the misregulation of epigenetic processes and tumour development.

In particular, protein methyltransferases (PMTs) are enzymes that place methyl marks on key proteins, predominantly histone tails, and can be key drivers in cancer processes. This review will discuss how PMTs regulate cell fate and development, the relationship of PMTs to cancer development and the development of tazemetostat, the most clinically-advanced PMT inhibitor.

How does a single set of DNA codes create an organism with highly differentiated cells? The complex mechanism that regulates differential expression during development is termed epigenetics, literally meaning ‘over genetics’. In multicellular organisms, this function has evolved into a complex system of enzymes, binding proteins and accessory proteins that regulate the transcription of DNA (1,2) and control specialisation of cells.

These processes control cell fate during embryogenesis and development as well as stem cell differentiation in mature organisms. Interestingly, once a cell has undergone epigenetic changes that result in differentiation, its phenotype is fixed and heritable unless artificial manipulation or misregulation occurs. For example, it has been shown that pluripotency can be induced in somatic cells by changing their transcriptional network (3).

Epigenetic functions, and particularly the enzymes that produce these sometimes heritable modifications, have been the subject of intense study for the past decade but are still not understood fully. Taken as a whole, the families of proteins that are responsible for epigenetic changes provide crucial targets for manipulation; both as a path to develop treatments and to further understand the role of epigenetics in developmental biology and disease.

A primary epigenetic mechanism is the regulation of access to genes by transcription factors, DNA replicating complexes and DNA repair elements. This is predominantly accomplished through the remodelling of chromatin to induce compaction or relaxation. The nucleosome is the basic building block of chromatin. It is an octomer of histone proteins wrapped in 147bp of DNA with amino-terminal tails projecting from the nucleosome (Figure 1).

The sequence of these tails is highly conserved and represented by an alpha- numerical nomenclature (H1, H2, etc). Post translational modification (PTM) of histone tails such as methylation, acetylation, sumoylation or phosphorylation serves as a key regulatory mechanism to permit or restrict access to genes through subsequent recognition of histone tails by other proteins and complexes of proteins.

Families of histone binding proteins are very specifically targeted to both histone tails and the PTM status of that tail. For example, proteins that contain specific sequences known as bromodomains will only bind acetylated histone tails and others that contain chromodomains will only bind methylated histones (4-7). The specificity of binding extends to modifications of targeted residues on individual tails. For example, the Lethal (3) malignant brain tumour-like protein 1 (L3MBTL1) will only bind to the histone H4 tail where the lysine 20 is mono or di-methylated (8,9).

This is important because epigenetic proteins tend to exist and exhibit their functions as large complexes rather than as individual proteins and these binding domains often target the functional enzymes in this complex to specific histone tails with PTM patterns. Study of these patterns has led to an abbreviated understanding of the functions of PTMs on histone tails. For example, the addition of methyl marks to the H3 tail can have varying effects on transcription (Table 1).

Monomethylation of the H3K27 amino acid is generally permissive for transcription while dimethylation is repressive.

The role of epigenetics in development and in disease processes is only beginning to be understood, but a clear link has been established between the misregulation of epigenetic processes and tumour development. In particular, protein methyltransferases (PMTs), enzymes that place methyl marks on amino acids in proteins and histone tails, have been shown to be key drivers in cancer processes (10-13).

All PMTs require the cofactor s-adenosine methionine (SAM) as a methyl donor. While all of the enzymes in the PMT class use the same co-factor, the active sites can vary significantly (15). All lysine methyltransferases (except the enzyme DOT1L) share a common domain termed a SET [Su(var)3-9, Enhancer-of-zeste,Trithorax] domain which is the active site for enzymatic transfer of methyl groups (16,17). The arginine methyltransferases also share highly conserved active sites but not SET domains (17).

The lysine residues in histone tails can have as many as three methyl groups added to an individual residue and the arginine residues can accept up to two methyl groups in each individual arginine in either a symmetrical or asymmetrical orientation. The degree of methylation (mono-, di- or tri-methylation) has a dramatic impact on chromatin and transcription, in that histone binding proteins can have highly specific recognition elements that can differentiate between methylation states (18).

Another example of the heterogeneity of PMTs is their substrate specificity. Some enzymes will only methylate one specific site and some sites can only be methylated by a specific enzyme (12,13,15). For example, the PMT DOT1L can only methylate the histone H3 tail at the lysine 79 residue and is the only enzyme known to methylate that residue. In general, the PKMTs demonstrate a high degree of substrate specificity while the PRMTs are more permissive (17).

Because of their potential role in human disease, there have been significant efforts to identify small molecule PMT inhibitors. These compounds have served both as probes to elucidate the role of PMTs in cellular processes (19,20) and as leads for drug discovery. Several inhibitors of PMTs have been reported with varying selectivity, potency and mechanism (21). For the purpose of this review, only those targets that have entered clinical testing for oncology targets are discussed.

DOT1L is an important target in a subset of Acute Myeloid Leukaemia (AML), called Mixed Lineage Leukaemia (MLL)-rearranged leukaemia (22). MLL rearranged leukaemia is characterised by alterations in the MLL1 locus. MLL1 is one of the catalytic subunits of the MLL complex, which is important for regulating gene expression during normal hematopoiesis (23). In leukaemias, the MLL1 locus is often altered due to chromosomal translocations resulting in oncogenic fusion proteins.

One of the best studied of these fusions is MLL-AF1022. MLL-AF10 is caused by a fusion between regions of chromosome 10 and 11, creating a novel protein with the N-terminus of MLL1 and the C-terminus of AF10. This oncogenic fusion protein can aberrantly recruit DOT1L to the Hox gene cluster, resulting in enhanced H3K79 methylation.

Increased H3K79 methylation leads to increased expression of Hox genes, which leads to a decrease in normal myeloid differentiation and an increase in proliferation (24). Inhibition of DOT1L reduces expression of Hox genes which translates into robust anti-proliferative effects in MLL-rearranged leukaemia models (25). As a result, a DOT1L inhibitor, pinometostat (EPZ-5676; Table 2) was the first PMT inhibitor to reach clinical trials. 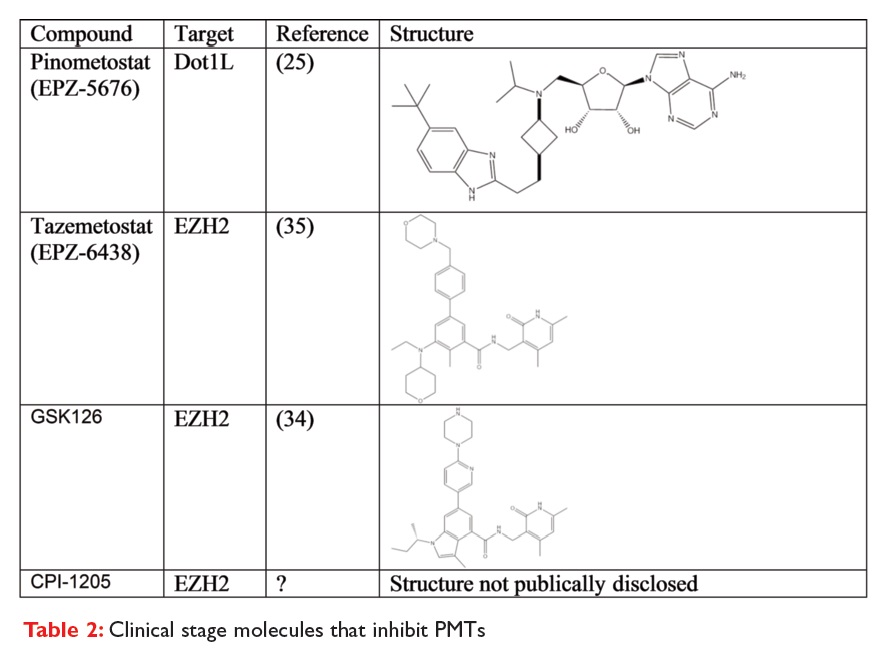 It is a SAM competitive inhibitor of DOT1L and decreases H3K79 methylation and proliferation in preclinical models of MLL-rearranged leukaemia (MLL-r) (25) and is currently being evaluated in Phase I clinical trials for the treatment of paediatric patients with MLL-r.

EZH2 is one of the critical catalytic subunits of the polycomb repressive complex 2 (PRC2), a primary mediator of transcriptional repression that acts by inducing methylation of lysine 27 on histone H3 (H3K27). While there are a variety of biologically relevant roles for H3K27 methylation mediated gene repression, PRC2 plays an important role in cellular differentiation and proliferation (16). Perhaps the most promising validation of EZH2 as a drug target is from frequent gain-of-function mutations observed in non-Hodgkin lymphoma (NHL).

These mutants preferentially induce trimethylation of H3K27, enhancing the repressive activity of PRC2 and promoting oncogenesis (26-28). It is believed that enhanced H3K27 trimethylation prevents B-cells from differentiating and maintains them in an oncogenic state. Inhibition of EZH2 in preclinical models of lymphoma can reverse this effect and inhibit unchecked proliferation29,30. Another important role for EZH2 in oncology is the antagonistic relationship between PRC2 and the SWI/SNF chromatin remodelling complex during transcriptional regulation.

The SWI/SNF complex drives the mechanical alteration of the structure of chromatin making DNA more accessible for transcriptional initiation. Deficiencies in chromatin remodelling by mutation or deletion of SWI/SNF subunits have been associated with many cancers (31). Recent preclinical and clinical findings have demonstrated that EZH2 is a promising target in malignant rhabdoid tumour (MRT), a disease characterised by the loss of INI1, which is a key SWI/SNF component (32).

The sensitivity of MRT models to EZH2 inhibitors and objective responses in the clinic demonstrate that epigenetic defects in cancers can be ‘corrected’ using therapies targeting epigenetic pathways. Additional studies are required to further evaluate PRC2 inhibition in a broader range of SWI/SNF deficient tumours, as these lesions are quite common and would provide even more value to this already important class of therapeutic agents. Several EZH2 inhibitors with SAM competitive mechanisms can substantially reduce H3K27 methylation in a wide variety of cells.

Moreover, preclinical models of B-cell lymphoma and MRT show dramatic sensitivity to EZH2 inhibitors (32-35). Several inhibitors including tazemetostat (EPZ- 6438), GSK2816126 and CPI-1205 (Table 2) are currently in clinical trials. Tazemetostat is the most advanced of these and is currently being developed for the treatment of B-cell malignancies (NHL) patients and patients with INI1 deficient solid tumours.

All this adds up to a very complex picture even when only those enzymes that add methyl groups are considered. The methyltransferase class of enzymes continues to be a challenging but very rewarding target class with more probes and drugs being reported each year. As probe compounds move into the public domain and drugs advance in the clinic, the understanding of this very complex area of science will advance significantly. This in turn will lead to the identification of new disease targets in cancer and other diseases.

We are now just beginning to understand how epigenetics are misregulated in cancer and other human diseases. The ability to ‘fix’ broken chromatin machinery such as MLLr or INI1 loss with DOT1L and EZH2 inhibitors has opened the door for continued effort in understanding how we can target epigenetics in the clinic. In short, PMTs can reasonably be expected to be an important drug class for many years to come. DDW

This article originally featured in the DDW Summer 2016 Issue

Dr Michael Thomenius is a cancer biologist trained at Case Western Reserve and Duke Universities. He is currently a principal scientist at Epizyme where his research has focused on identifying novel epigenetic targets in oncology and understanding the contribution of chromatin biology to cellular transformation. Michael is currently leading efforts at Epizyme to further understand the mechanism of action of EZH2 inhibitors in non-Hodgkin’s lymphoma.

William P. Janzen is the Executive Director of Lead Discovery at Epizyme, Inc. Mr Janzen has more than 20 years of experience in innovative drug discovery and has been a leader in high throughput screening for lead generation in academics, start-up companies and large pharmaceutical ventures.