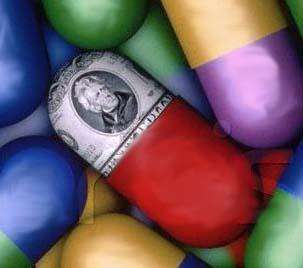 In an era of unprecedented productivity challenges, rising regulatory constraints and ever increasing costs, the need to be innovative, productive and efficient in all R&D departments has never been greater. We discuss how and why Wyeth’s R&D was literally dismantled before the process was re-engineered and put back together again, while taking a look at the levels of success this has achieved.

Beginning in 2001, the R&D Division of Wyeth Pharmaceuticals has embarked on a major overhaul of its processes and systems aimed at significantly increasing and optimising its drug discovery and development capabilities. Amid unprecedented global regulatory burden, industry consolidation, unsustainable drug development costs and lengthening cycle times, the company has achieved significant increases in productivity in all of the major components of the R&D.

This article will explore current industry challenges and provide insight into how Wyeth addressed them, transforming R&D to develop a broader, deeper and more innovative drug development pipeline.

The challenges of R&D in the pharmaceutical industry are well known, and are the subject of numerous publications highlighting decreasing productivity despite ever-increasing levels of R&D funding. A closer examination of the relevant issues and challenges is necessary to understand some of the potential solutions.

The research environment is changing more rapidly than ever before. In the post-genomics era, it is now possible to unravel the molecular causes of many diseases. More detailed understanding of disease has allowed researchers to identify better therapeutic targets for drug intervention. In addition, the pharmaceutical industry is taking a less empirical approach to treating disease, and attempting more frequently to develop therapies that alter or modify the course of the disease.

In addition, increasing scientific sophistication inspires new paradigms for therapeutic intervention, such as recognising that disease heterogeneity exists and that not all patients that present with a given set of symptoms necessarily have the same molecular underpinnings of disease. Accordingly, they may need to be treated with different medicines. R&D leaders must be prepared to navigate through this added complexity.

R&D productivity is down

Several factors, both intrinsic and extrinsic to R&D, are responsible for this decrease in R&D productivity. During the past two decades, there has been unprecedented consolidation of the pharmaceutical industry through a series of mergers and acquisitions. This wave of consolidation has caused a significant disruption to R&D across the industry, which, according to some assessments, can last for more than three years. According to a recent study, the number of NDA submissions, the number of drugs in pre-clinical development and the number of drugs in clinical development decrease dramatically three years following a merger.

Pharmaceutical companies strive to innovate, and this is critical to patients. However, innovation itself carries significant risk and can contribute to lower R&D productivity. With innovation comes increased product attrition: simply put, novel compounds fail at higher rates, and take longer to develop.

To confound the risk of innovation further, regulatory agencies appear to take longer to approve the most innovative drugs, and to approve them in fewer numbers, as far as the data can be interpreted to date. Thus, developing the first drug of a class can take longer, cost more and carry a higher technical and regulatory risk, all of which can contribute to lower R&D productivity.

Finally, excessive, and sometimes wasteful, regulatory burden can negatively impact R&D productivity. Despite 15 years of effort by worldwide regulatory bodies to harmonise their procedures and standards under the ICH (International Committee on Harmonization), the FDA, EMEA (Europe) and PMDA (Japan) have yet to develop one global standard for drug approval. Accordingly, regulatory standards continue to vary geographically, and often cause pharmaceutical companies to duplicate their efforts in clinical trials in an attempt to satisfy multiple regulatory bodies.

One of the most egregious examples of disharmony among regulatory agencies for the development of a new drug is the requirement for placebo-controlled studies in the United States, and active-comparator studies in Europe. This necessitates conducting both types of studies, which is not the optimum utilisation of limited resources. Often, after the differing standards in the US and Europe are satisfied, the PMDA in Japan will require an additional set of clinical trials, typically to be conducted in Japan, to ensure that genetic differences between Western populations and the Japanese, although exceedingly rare, do not play a role in the activity of the new medicine.

The requirement for ‘post-approval’ studies by regulatory authorities, often demanded at the 11th hour on the eve of drug approval, and the potential for even greater regulatory conservatism in the post-Vioxx/Celebrex era, may hamper R&D productivity further. As the bar for both safety and efficacy continue to increase, potentially to unachievable levels, innovation may be stifled, as has occurred in the field of antibiotic research, which is not in the best interests of patients or public health.

R&D costs are up

In fact, the pharmaceutical industry invests more in biomedical research than the National Institutes of Health, the primary biomedical research-funding agency of the United States government. One reason research spending is so high for the pharmaceutical industry is the fact that it costs between $800 million and $1.7 billion to discover and develop a single new medicine, and it can take more than five years to recoup this investment after the drug is on the market.

What did Wyeth do to improve productivity?

To improve performance of R&D at Wyeth, we created an R&D productivity model that established aggressive goals for all parts of R&D. Then the compensation of our scientists was linked to performance against pre-specified objectives that were derived from this R&D Productivity Model. In order to allow our scientists to be successful in achieving these objectives, we completely re-engineered R&D; literally, dismantling R&D and put it back together again.

Wyeth R&D developed the over-arching goal of submitting two new drug applications (NDAs; only counting new molecular entities) per year, every year. To achieve this goal, we utilised standard pharmaceutical industry success rates for all stages of development and created a simple model for increasing R&D productivity. We determined that every year, 15 novel compounds needed to be discovered and placed into formal development, and that this would translate into 12 investigational new drug applications (INDs) per year. Those, in turn, would result in three compounds ready for Phase III clinical trials, which would finally produce two new drug applications to be submitted each year (see Figure 1). 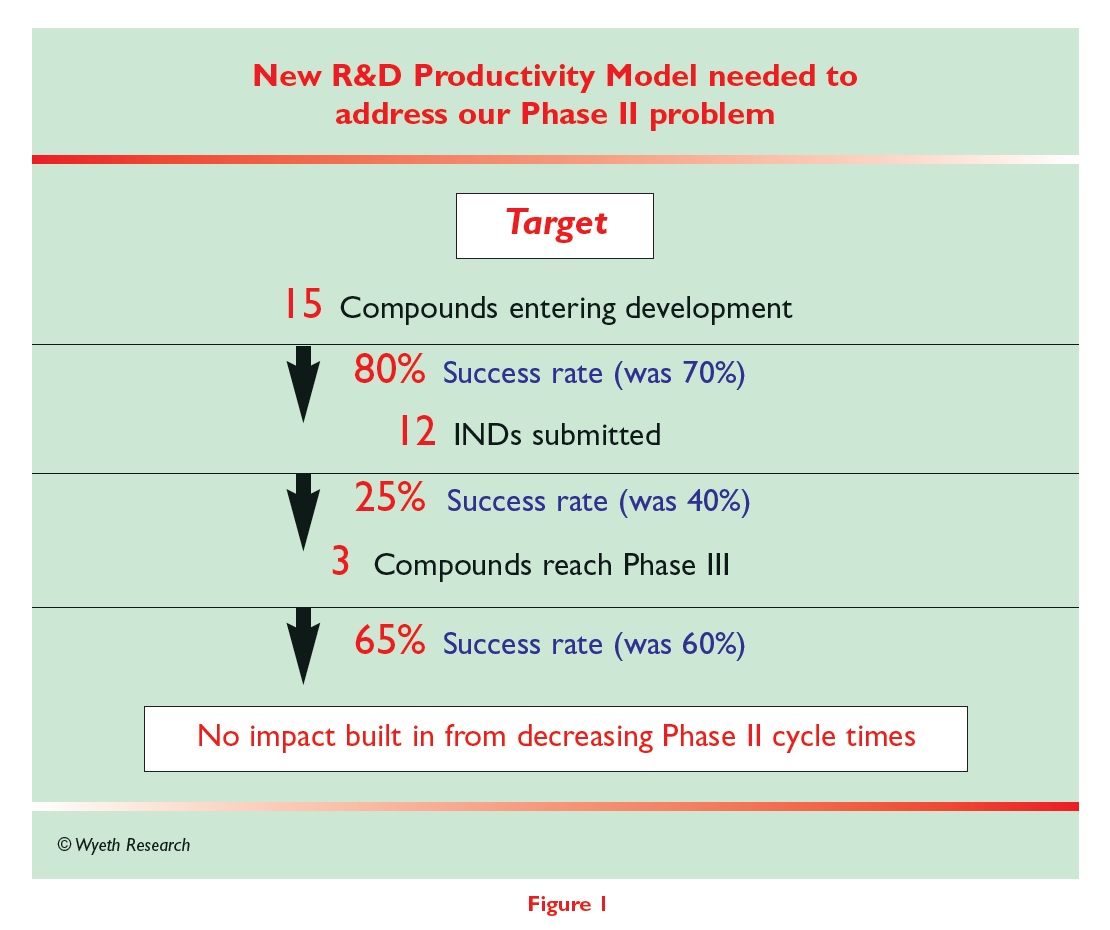 Wyeth has now achieved its goal, and is currently submitting at least two NDAs per year for regulatory approval.

Two things needed to occur in order for this aspirational objective to be achieved. Because we linked the compensation of our scientists to performance against pre-specified objectives, it became essential that these objectives are entirely transparent to all R&D employees, and that all employees understood clearly what they needed to accomplish individually. To ensure transparency in our objectives, we developed the R&D Scorecard, which serves as a ‘contract’ between R&D scientists and R&D management. Accordingly, employees have clear expectations and are held accountable for their performance in a ‘living document’ that is reviewed quarterly.

In addition, when the R&D Productivity Model was put in place, we realised that significant improvements were necessary in our processes. To accomplish this, we initiated a series of more than 50 ‘breakthrough projects’ analysing key components of the drug discovery and development process, from the earliest stages of discovery to the latest stages of clinical development. These breakthrough projects were not intended for small, incremental improvements in our performance, but rather for quantum improvements, and they often require radical re-engineering of our processes, and a commitment by our scientists to think ‘outside of the box’.

Wyeth’s experience demonstrates that despite a changing research environment, unprecedented productivity challenges, rising regulatory burden and increased costs, R&D groups can re-engineer themselves to deliver higher levels of productivity. With a clear strategy and determination of management, not to mention the alignment of employees, R&D can overhaul itself and dramatically augment productivity. Eventually, this internal success will play an even more important role – improving patients’ lives through access to innovative new medicines. DDW

Dr Robert Ruffolo has worked in pharmaceutical research for over 25 years. He joined Wyeth in 2000 and is currently President, Wyeth Research and Senior Vice-President, Wyeth. Prior to joining Wyeth, Dr Ruffolo spent 17 years at SmithKline Beecham Pharmaceuticals where he held a number of posts within Research and before that, six years at Lilly Research Laboratories as Research Scientist and Chairman of the Cardiovascular Research Committee. Dr Ruffolo has played a significant role in the discovery and/or development of a number of marketed therapeutics. He has authored nearly 500 full-length publications and 200 abstracts, and has edited 17 books.