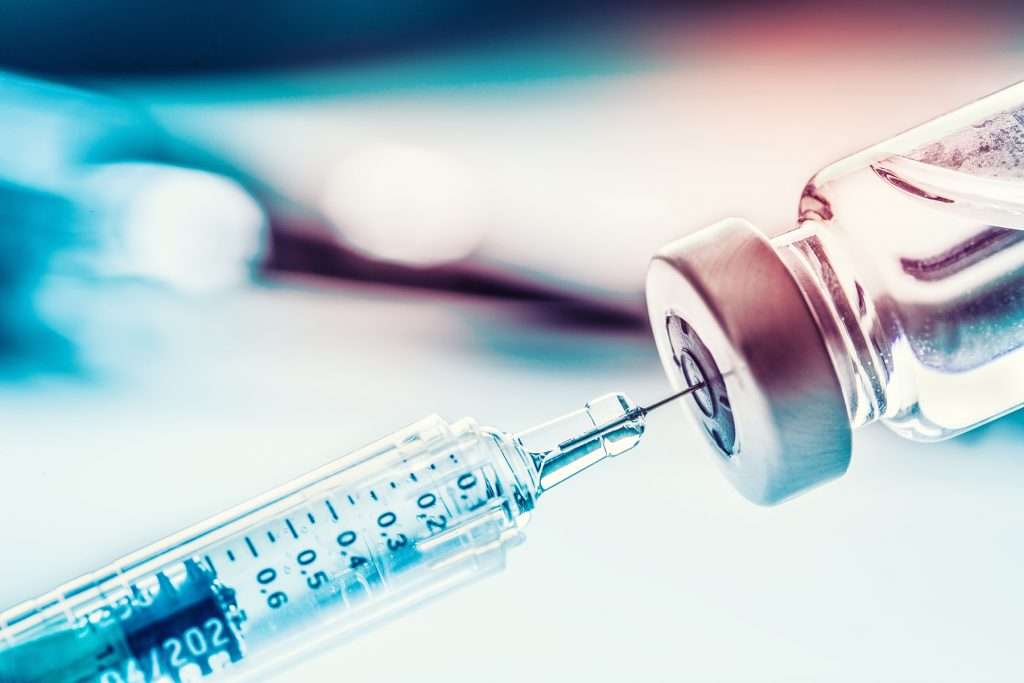 The excitement over the past 30 years for immunotherapy of cancer and other diseases has not led to the expected clinical successes. Over-enthusiasts predicted a cure for cancer with the initial development of monoclonal antibody technology, and later the ‘magic bullets’ or toxin-labelled antibodies.

Identification of proteins restricted to, or at least overexpressed in tumours has also led to disappointing clinical results. The main barriers have been a lack of immunological understanding of the processes at work, eg immune tolerance. Advances in our understanding of how to induce strong immune responses and how to manipulate the immune system to avoid immunological tolerance have opened the way for emerging therapeutic vaccinations in the treatment of not only cancer, but other diseases as well.

This review will focus on immunotherapy for cancer and chronic human diseases characterised by the altered expression of self-proteins.

Immunological tolerance regulates the immune system such that foreign pathogens are quickly attacked, while immune responses directed against the body are rare. This is achieved by functionally removing cells that recognise self-antigens from the immune system. In most cases, a breakdown of immune tolerance is undesirable, and leads to autoimmunity.

Considerable excitement concerning the treatment and diagnosis of disease, mainly cancer, arose with the development of monoclonal antibody technology in 1975 by Kohler and Milstein1. Unfortunately, very little clinical progress has been made utilising monoclonal antibodies to treat disease, with several noted exceptions (Rituximab ( -CD20), Remicade ( -TNF) and Herceptin ( -Her-2).

Part of the failure of monoclonal antibodies in treating disease may partly be due to the lack of support from the pharmaceutical industry, which pulled its R&D funding after initial endeavours did not live up to expectations. However, there has been a resurgence of interest and success with monoclonal antibodies, which is mirrored in the number of monoclonal antibodies marketed or in late stage clinical trials for both cancer and immune system disorders such as asthma, allergy and autoimmunity (see Table 1). 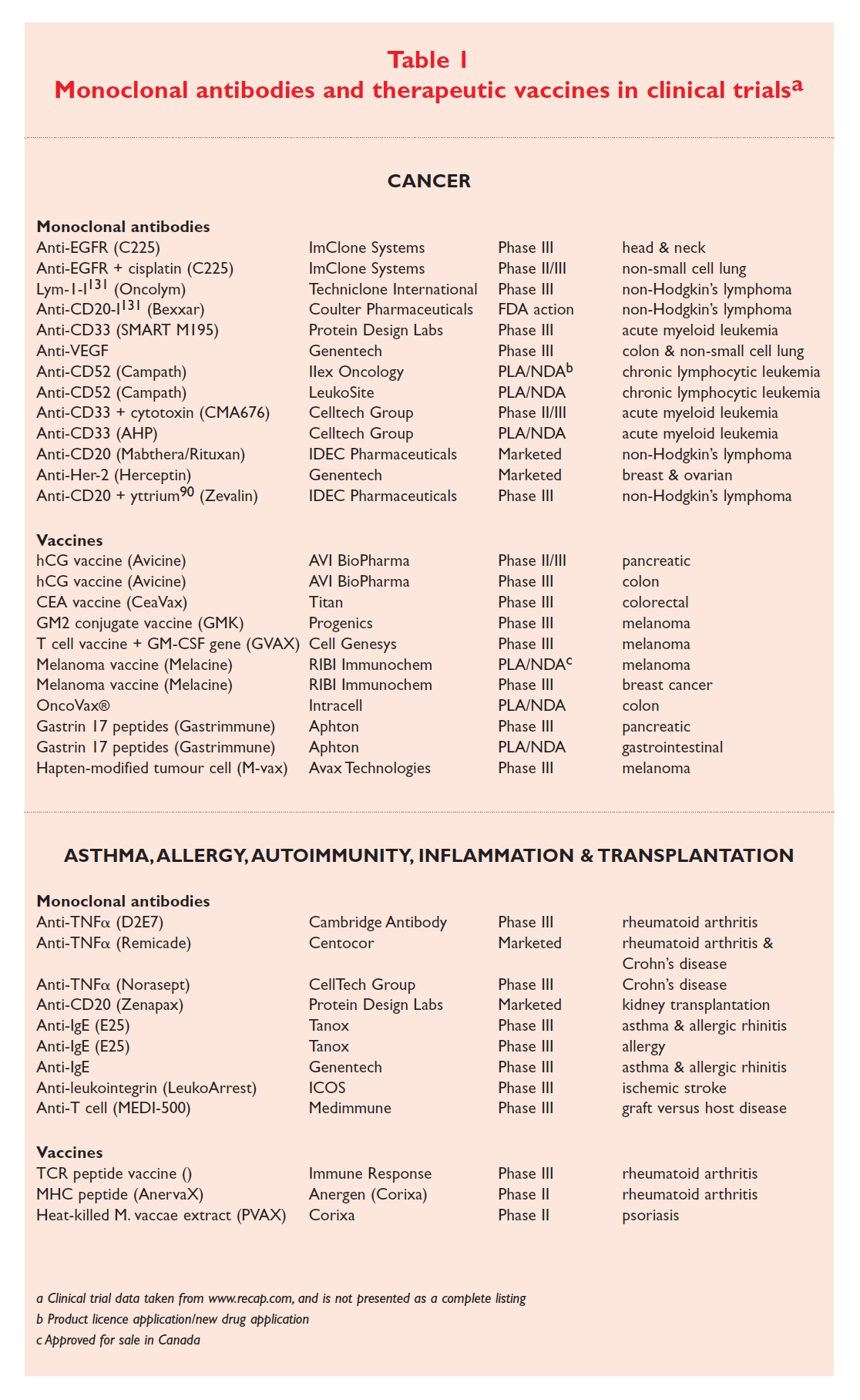 In addition to producing humanised monoclonal antibodies, much improved preclinical data can be obtained using these mice in combination with mice expressing human major histocompatibility complex (MHC) molecules (3-5). Better immunological understanding of how monoclonal antibodies function in vivo has greatly increased their success in therapy; however, therapeutic vaccinations may have overwhelming advantages to monoclonal antibody therapy (see Table 2). 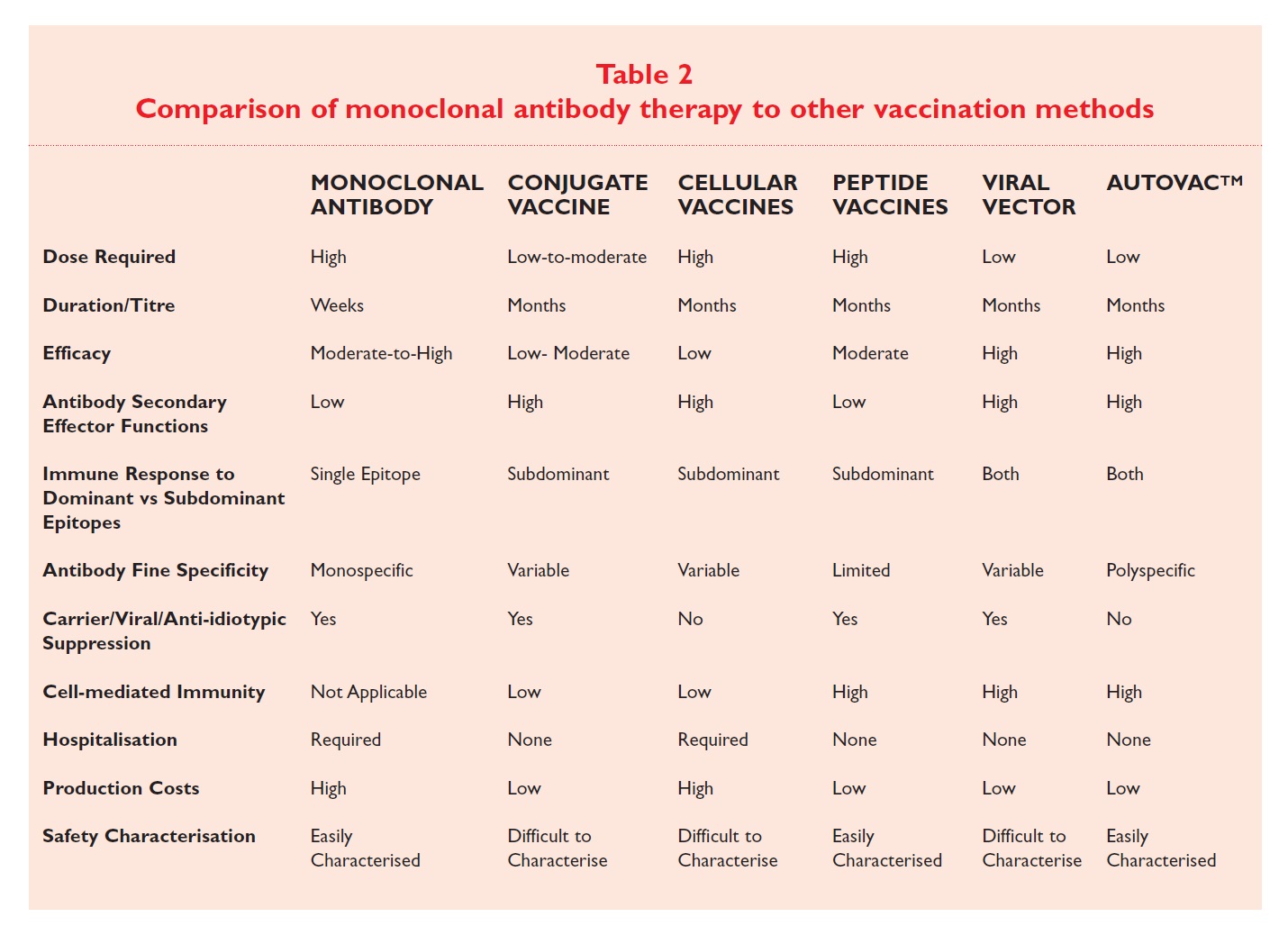 In fact, the inability of monoclonal antibodies to activate effector functions can explain some of the poor results obtained in previous cancer trials. In addition to the humoral response, vaccination has the advantage of activating cell-mediated immunity such as CTLs. Activated CTLs can directly kill other cells, such as a tumour, expressing the target antigen and MHC class I. The advantages of inducing both a polyclonal humoral response and a strong cell-mediated response would provide a new generation of therapeutic vaccinations with a greater chance of clinical success.

The first therapeutic vaccines utilised donor tumour cells as immunogens. Irradiated devitalised tumour cells are injected back into patients with the aim of raising an immune response to the tumour. Tolerance may prohibit immune responses to the dominant epitopes, but by providing some T cell help in the form of recombinant cytokines, viral oncolysates or genetically modified tumour cells (eg to express higher levels of MHC and co-stimulatory molecules) limited success can be achieved (7).

With the identification of tumour-associated antigens, peptide-based vaccinations can be developed to target specific antigens aberrantly expressed in cancer. Peptides are either obtained directly by acid-elution from MHC molecules on the cell surface of tumours (that can then be sequenced), or indirectly acquired from tumour-specific heat shock proteins (HSPs) that chaperone a wide variety of peptides (8). Unfortunately, these approaches have the disadvantage of being expensive and labour intensive.

In addition, because a complete set of peptides derived from both normal and tumour-associated proteins are included, development of autoimmunity to normal tissue may occur (9). Determining the peptide specificity of tumour-specific CTLs ex vivo can be used to generate tumour-specific peptide vaccines for the generation of CTL responses. Peptides themselves are poorly immunogenic, and need to be conjugated to a carrier protein.

Conjugate vaccines are able to elicit immune responses to poorly immunogenic peptides by providing T cell help in the form of a highly immunogenic carrier protein, such as keyhole limpet hemocyanin (KLH). Unfortunately, the dominating immune response to the carrier protein results in a poor immune response to the target peptide (10). Additionally, conjugated peptides may have problems entering the MHC class I presentation pathway for CTL activation. The other disadvantage of peptide- based therapies is that the immune response elicited is to that single peptide epitope; whereas a given protein probably contains several MHC class I and II binding peptides.

The advantage of this approach is that the tumour-specific peptides are efficiently ‘presented’ to the immune system in a way that optimally activates T cells. Multiple target epitopes can be presented to the dendritic cells with a cocktail containing several diseaseassociated peptides. This approach is limited by cost and efficacy: having to develop specific vaccines for each patient and bypassing immune tolerance to the peptide epitopes.

Therapeutic vaccines have been hindered by their inability to break immunological tolerance and to generate a robust response composed of both a humoral and a cellular immune component. Several recent advances have addressed these problems, including recombinant viral vaccinations, polynucleotide (RNA and DNA) vaccinations, and autovaccinations (AutoVacTM). All of these techniques can induce immune responses to conserved self-proteins by providing exogenous T cell help to lymphocytes, albeit at varying efficiencies.

Recombinant vaccinia virus can induce strong immune responses, both humoral and cell-mediated, to weakly immunogenic self-proteins. Recombinant viruses can be engineered to co-express multiple peptide epitopes (11), immunostimulatory cytokines (such as IL-12) or costimulatory molecules (such as B7 family members). The extreme immunogenicity of vaccinia virus limits its use to a single vaccination that cannot be boosted (12). The inability to boost or vaccinate with subsequent vaccinia-based therapies, and other safety concerns, limit the use of recombinant viral-based vaccinations.

Polynucleotide vaccinations are able to generate both a humoral and a cell-mediated immune response, but appear to favour cell-mediated immunity. Recombinant DNA or RNA is introduced into the patient, where it is expressed in either antigen presenting cells that directly activate lymphocytes, or it is expressed and released by some other cell type and the protein is sequestered by the antigen presenting cell. Preclinical data are promising, but more time is needed to generate clinical data in humans and to resolve safety concerns. RNA vaccinations have safety advantages over DNA vaccinations, in that RNA cannot incorporate into the host genome and has a shorter half-life than DNA.

Autovaccination is another approach that can bypass immunological tolerance. Rapid and robust humoral and cellular immune responses can be induced to conserved self-proteins by providing exogenous T cell help to self-reactive lymphocytes. By constructing proteins containing promiscuous foreign T cell epitopes inserted into flexible regions of self-proteins, therapeutic autovaccination can trick the immune system into responding to otherwise immunologically tolerated proteins. The mechanism is shown in Figure 1. 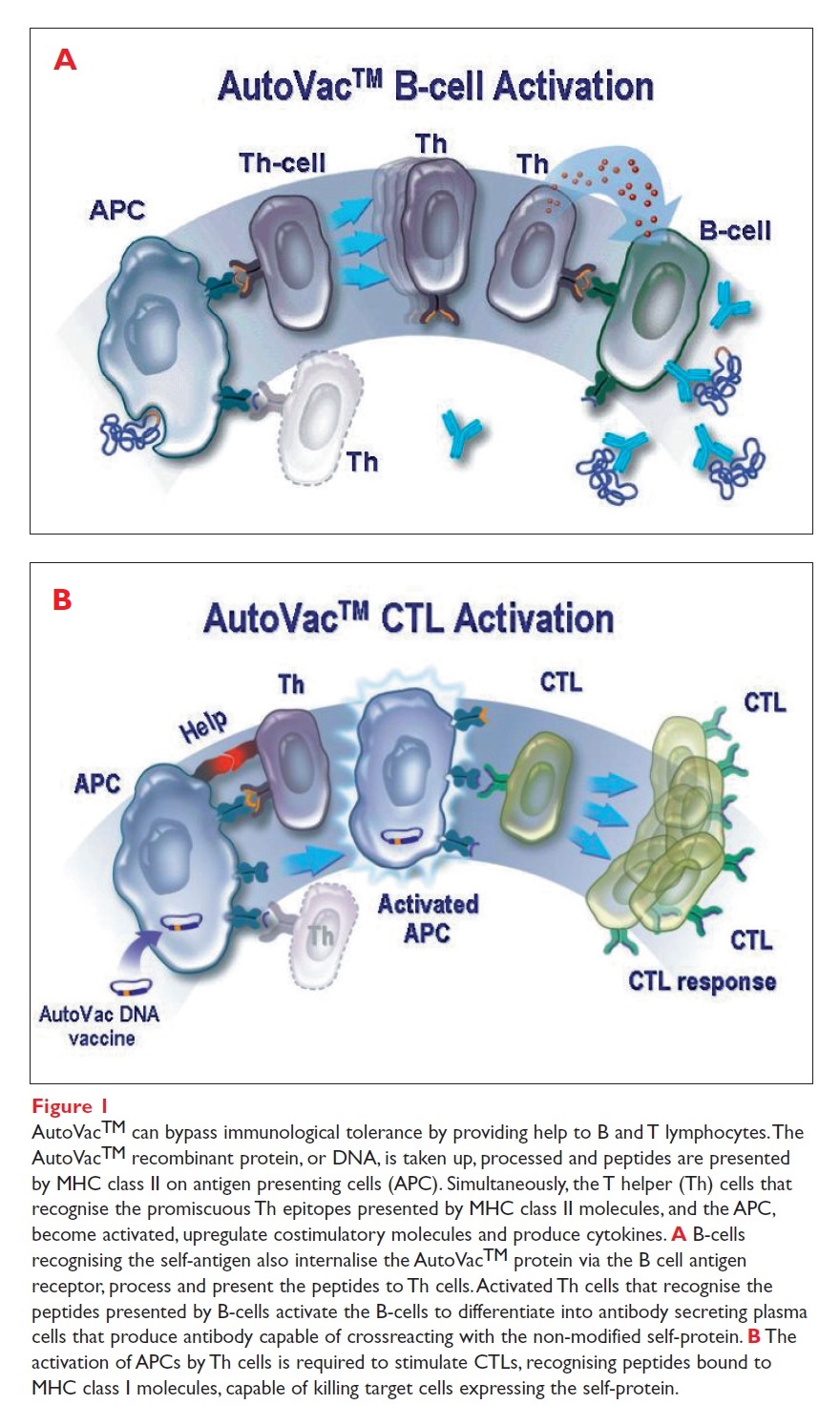 Activated Th cells then provide help (eg cytokines) to those B cells that have also internalised the modified selfproteins via the B cell antigen receptor; and antigenspecific B cells then secrete antibodies capable of cross-reacting with non-modified self-protein (Figure 1A). Using the appropriate delivery system, or DNA vaccination (Figure 1B), AutoVacTM molecules can also induce CTLs. As in Figure 1A, internalised peptide epitopes induce Th cells that then activate antigen presenting cells via CD40-CD40L interactions, for example.

Activated antigen presenting cells can stimulate naïve CTLs capable of killing target cells displaying tumour-specific peptides presented by MHC class I molecules. This approach has the advantages of bypassing immunological tolerance and activating both arms of the adaptive immune system to target self-antigens aberrantly expressed in disease, while avoiding several of the disadvantages of other therapeutic vaccine technologies (eg carrier suppression and peptide therapies, see Table 2).

This article originally featured in the DDW Summer 2000 Issue

Marc Hertz is a Project Manager at M&E Biotech A/S developing therapeutic vaccines for the treatment of cancer and chronic disease. He received his PhD from the University of Colorado Health Sciences Center and has been working at the National Jewish Medical and Research Center in the field of B lymphocyte immunology for the past eight years.

Søren Mouritsen is CEO of M&E Biotech A/S and is one of the founders of the company. He holds an MD and DSc from the University of Copenhagen. Besides his general training in surgery, medicine and immunology, Søren Mouritsen has been actively involved in various aspects of immunology for the past 15 years.

Anand Gautam is the Director of Immunology and Animal Pharmacology at M&E Biotech A/S. He has been carrying out research in the field of immunology for the past 15 years. Before joining M&E Biotech two years ago, Anand Gautam completed his PhD from University of London, did a post-doctoral training at Stanford University, California, and ran his own research laboratory at the John Curtin School of Medical Research, Canberra, Australia.