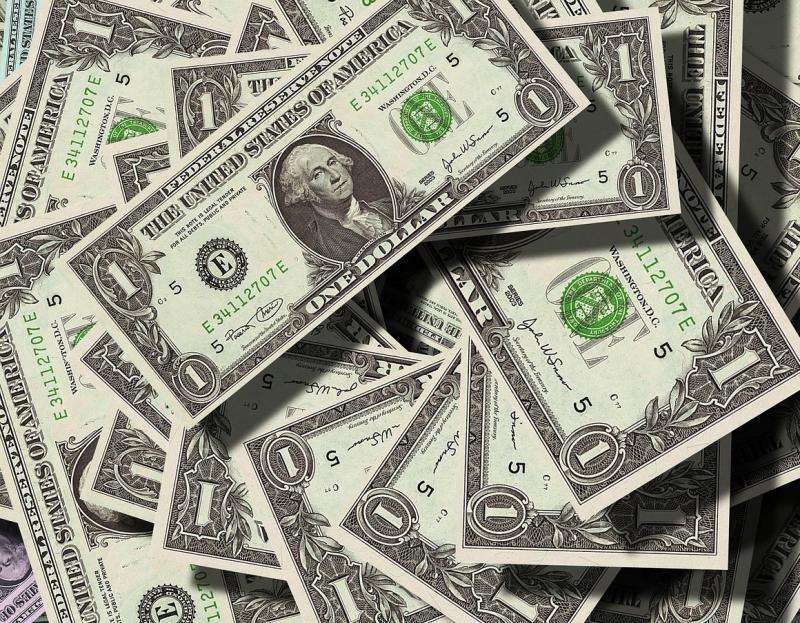 In 2003, the research products market reported revenues of $23 billion, with a 7.5% growth rate over 2002. Although there are many consumers in this market, by far the greatest are drug discovery research groups. 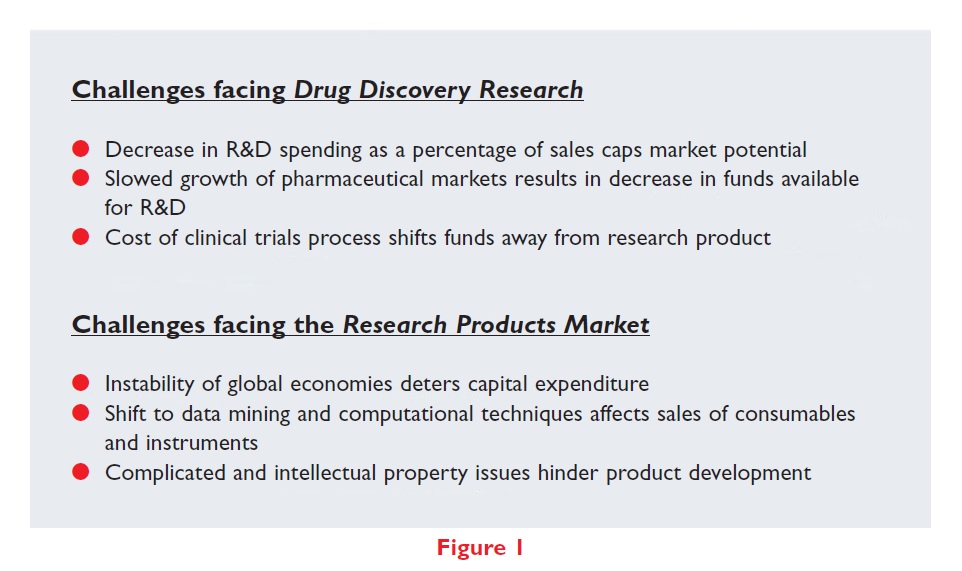 So, what is the outlook for both consumers and suppliers of research products? In this article we explore the key factors and trends facing this market, and how manufacturers of research products are responding to consumer demands.We also discuss some of the winning companies and technologies of 2003, and what can be expected in 2004.

In the last 20 years, the drug discovery space has benefited from three major trends:

1) Pharmaceutical sales increasing at a rate of 12% per year, driven by an increase in R&D expenditure as a percentage of sales, from 12% to a current estimate of 18%.

2) Substantial increases in government-provided research funding. The National Institutes of Health’s research budget has surpassed $28 billion, with a compound annual growth rate of 12% (1999-2004).

3) The investment community has infused considerable financial resources into the drug discovery space, allowing biotechnology companies the ability to invest an average of 80% of their revenues back into R&D.

The synergistic effect of these factors has revolutionised modern healthcare and driven the growth of the research products market. With each of the three major consumers experiencing their own financial crisis, the outlook for the research products market is mixed. Opportunity is certainly knocking for vendors whose products increase productivity and reduce overall costs. However, continuing limits on R&D spending are expected to hamper the market for the foreseeable future.

On the bright side, companies that develop and market novel solutions will benefit from the research community’s growing need to increase research efficiency and productivity. Adoption of these technologies, however, requires significant investment in both capital equipment and manpower, both of which may prove too expensive for some consumers.

Market participants will quickly find out that merely providing a solution will not be sufficient to succeed in this market, as consumers conserve resources and demand products that drive research. Therefore, vendors who invest in the development of efficient and novel technologies will thrive in this increasingly competitive marketplace.

The pharmaceutical industry’s historical doubledigit growth has slowed in recent years, with top line growth currently increasing at 5-6%. With such a dramatic slowdown, R&D expenditure is not expected to grow faster than this rate. Although the sequencing of the human genome has provided researchers with countless drug targets, most candidate therapeutics are just working their way into the pipeline.

This is discouraging news for Big Pharma, with 42 of the top 52 drugs expected to come off patent protection by 2007. So, with the door open for generic competition, how will pharmaceutical companies replenish deficiencies in the therapeutic pipeline, while at the same time controlling costs?

When facing difficult economic times, it is important to identify where R&D dollars are spent and how they can be reduced, while simultaneously maintaining a high level of productivity. Instead of slashing research budgets, the logical approach has been to focus on the utilisation of technologies and processes that increase the efficiency of R&D research. Although pre-clinical development consumes a significant amount of resources, the majority of R&D dollars are spent during the clinical trials process.

To efficiently manage the clinical trials process, it is important to know the pitfalls that await a prospective therapeutic. The vast majority of drugs never make it to the promised land of a commercially available therapeutic. On average, 70 out of 100 drugs submitted to the Food & Drug Administration (FDA) for approval will make it past Phase I trials. Only 50% will complete Phase II, the efficacy phase. Of the remaining 25 to 30 that finish Phase III, approximately 20 will ultimately become marketed pharmaceuticals.

This high rate of failure has proven to be an enormous expense, especially considering that seven out of 10 approved pharmaceuticals never generate revenues that equal or exceed the $800 million: the industry’s average cost for bringing a new therapeutic to market. Therefore, to maintain and increase their revenue growth, many pharmaceutical companies are being forced to restrict total R&D expenses, while they simultaneously have to increase the number of drugs in their pipeline.

The ‘fail faster, fail cheaper’ approach, which has become the industry’s mantra, provides minimal return without also focusing on the quality of each prospective lead. The heart of any successful drug discovery programme is on identifying and developing those targets that provide the most promising return, and simultaneously increasing the ratio between New Drug Applications (NDA) to Investigational New Drug (IND) approvals. Unfortunately, the investments necessary to increase the NDA to IND ratio are paradoxical to the cost savings mindset of executives during times of economic slowdown.

In addition to these advancements, the market has demanded tools that improve the productivity and efficacy of accepted technologies, such as automated nucleic acid sample preparation products. And increasingly, research groups are relying on software solutions that assist in the management of data, and track/co-ordinate research efforts to minimise duplication. As a result, laboratory information systems (LIMS) and data management/analysis products are becoming essential.

In 2002, the biotechnology industry as a whole invested approximately 80% of revenues back into R&D. In 2003, that number dropped to less than 70%. Although this industry has yet to turn a profit, its first products are quickly becoming tomorrow’s blockbusters. As an increasing number of biotechs have leads that become therapeutic agents, many of these companies are finding themselves shifting from a research-focused organisation to a product-focused business.

Ultimately, the goal of any biotech is to become a fully-fledged pharmaceutical company, which is exactly what is happening to the largest companies in this market. In 2003, the top 10 drug discovery biotechnology companies invested 21% of revenues back into R&D. Figure 2 highlights R&D expenditure as a percentage of revenues for various tiers of the biotechnology market, as compared to the top 10 pharmaceutical companies (2003). 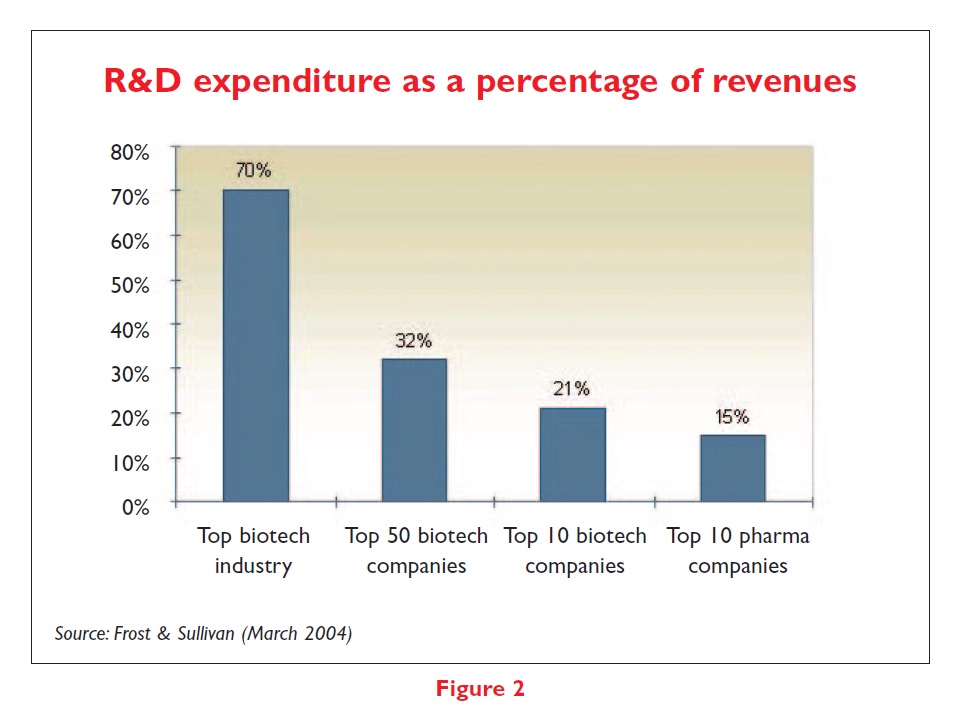 It is clear that as the biotech industry matures, tier 1 companies are transitioning into full-fledged pharmaceutical companies. And as many of biotech’s promising therapeutics are biologic-based, the number of these working their way through the clinical trials process is indicative of the success of this growing industry. Figure 3 contains the number of biologics in each phase of the clinical process during the first quarter of 2004. 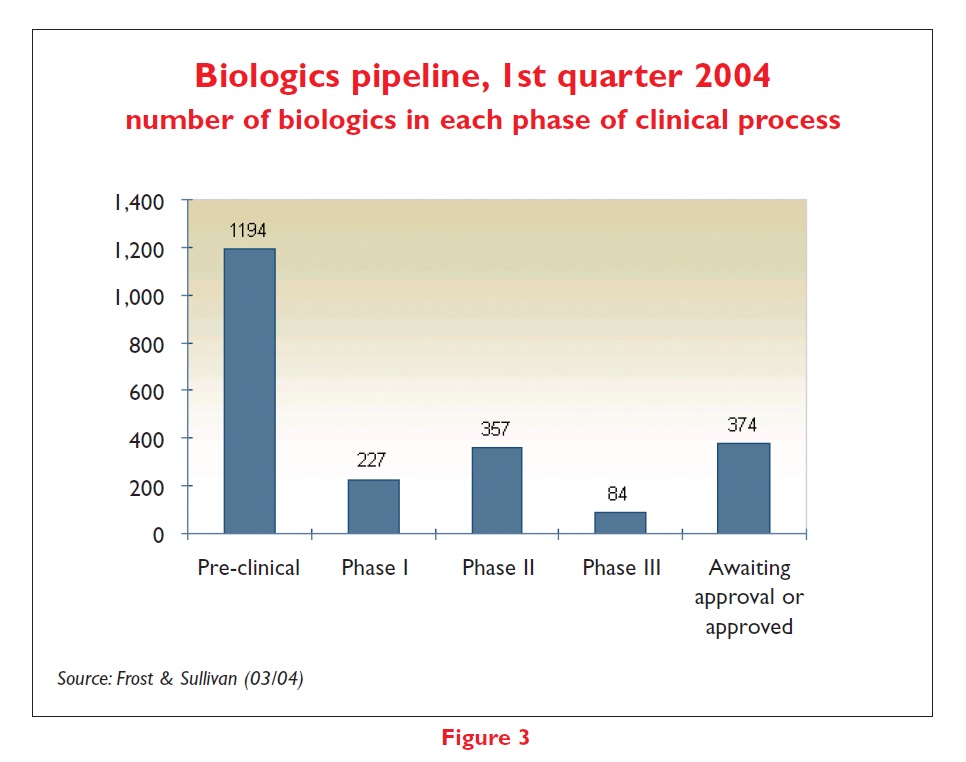 Academic and government research spending is certainly difficult to gauge; however, much can be learned by analysing the trends and spending patterns of the National Institutes of Health (NIH), one of the largest contributors to academic and government research. In 2004, with an estimated $28 billion budget, the NIH is expected to fund nearly 65,000 programmes, most of which are research initiatives.

Although many of these research programmes are not explicitly focused on drug discovery, they are nonetheless significant consumers of research products. It is estimated that a third of the NIH’s 2003 budget was allocated for the purchase of research products and services. Although the NIH’s contribution to research spending has increased dramatically in recent years, future funding growth is uncertain.

In 2003, the five-year initiative to double the NIH’s budget was completed, and as a result, the 2004 budget will reflect an increase of approximately 3%. It is anticipated that near-term budget growth will be of the same magnitude as inflation, a result of the US government’s shifting priorities towards deficit reduction and job creation. Figure 4 highlights the growth rate experienced by the NIH over the 1995 to 2004 term. 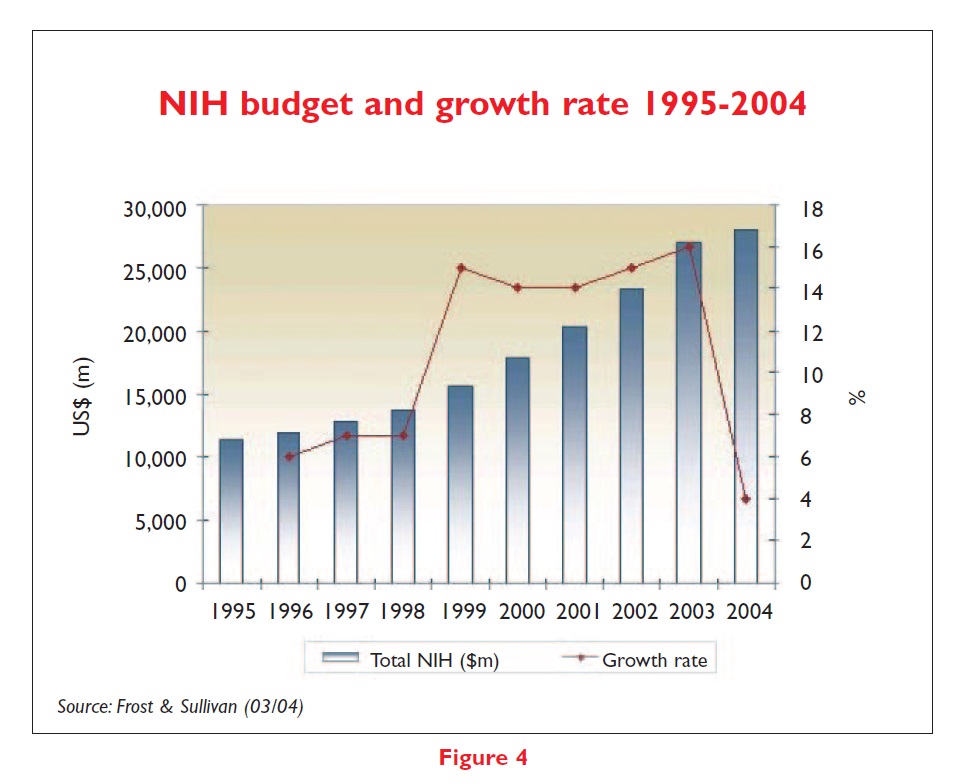 Having looked at the consumers of research products and services makes it now necessary to focus on the manufacturers and suppliers of these products.

The research products market, which reported revenues of $23 billion in 2003, has benefited in recent years from strong pharmaceutical discovery programmes, exploding academic research efforts and the biotech industry’s insatiable appetite for cutting edge technologies. Now as each of these segments struggle to maximise R&D investment in the face of unfavourable economic conditions, it is imperative that the research products market responds to changing demands.

This is not to say that the market will not continue to prosper; however, double-digit revenue growth, which had become the norm, has been replaced by 6-7%. Figure 5 outlines the relative market share for the top 15 research product vendors. 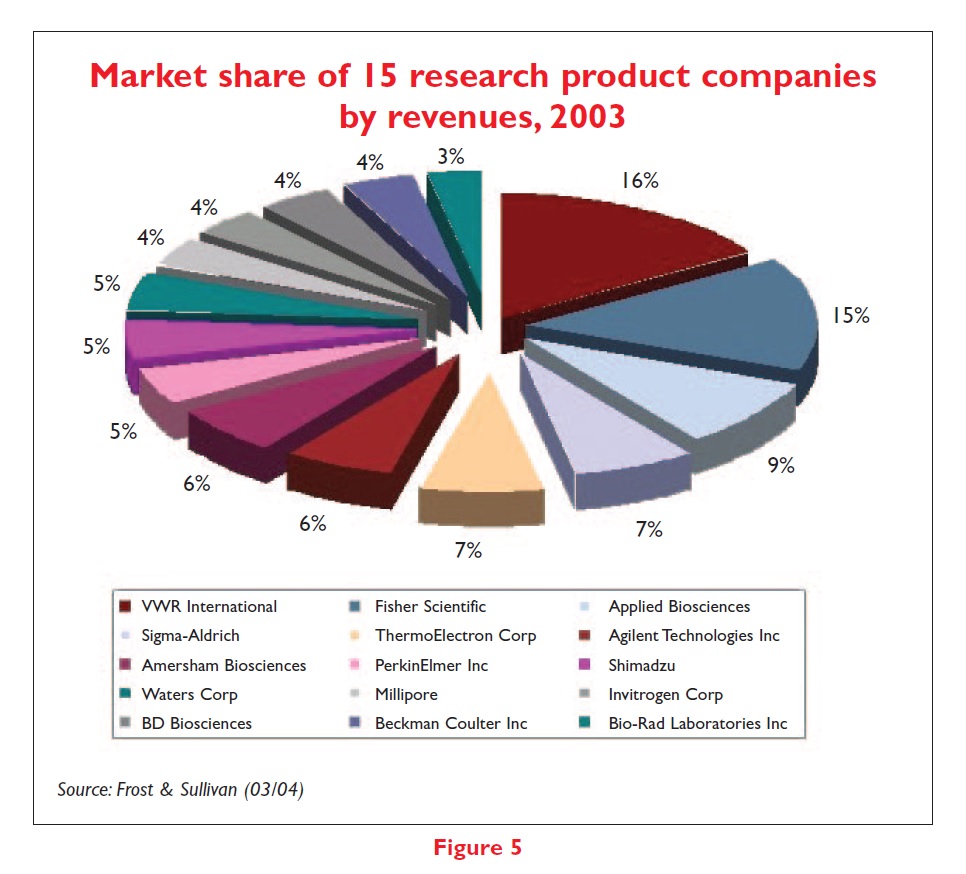 It is interesting to note that VWR and Fisher’s combined sales accounted for nearly a quarter of total market revenues. Although both companies manufacture some of their own products, the majority of their products is provided by suppliers.

Figure 6 contains the combined revenues of the top 15 research product vendors and highlights the sources of revenue growth for 2003. 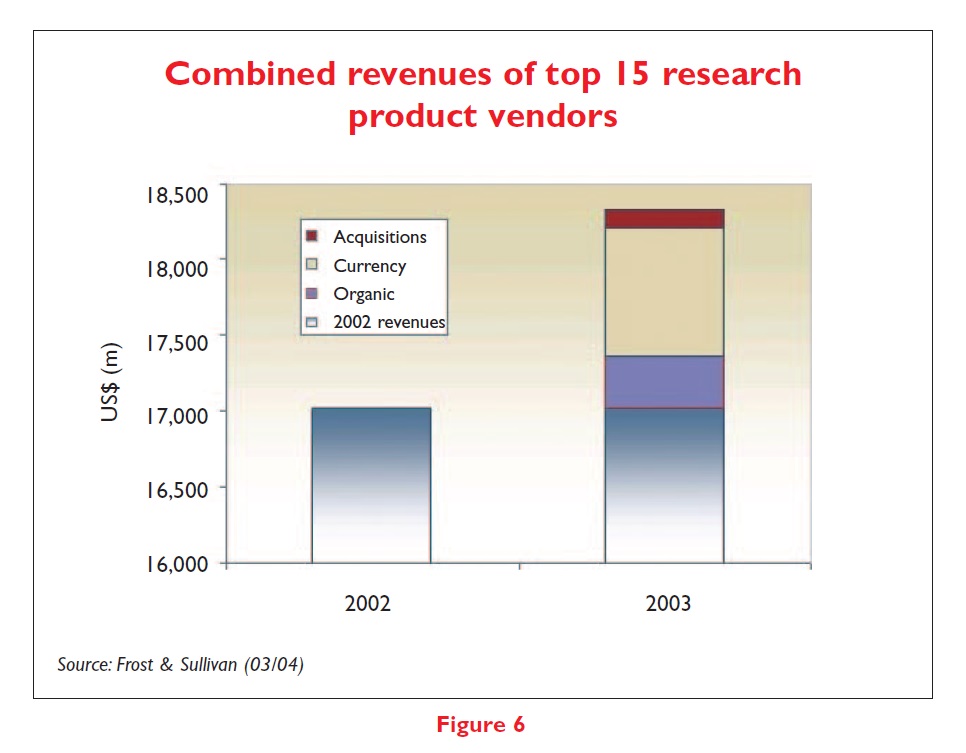 Perhaps most disturbing is the fact, that organic growth for the largest 15 research product vendors was an anaemic two per cent in 2003. Acquisitions contributed an estimated 0.6% to their growth, while favourable foreign currency exchange accounted for an estimated 5% of growth. Figure 7 contains the exchange rate for the Euro against the US Dollar for the last three months of 2003. Despite difficult economic conditions, 2003 yielded numerous winning companies and technologies. 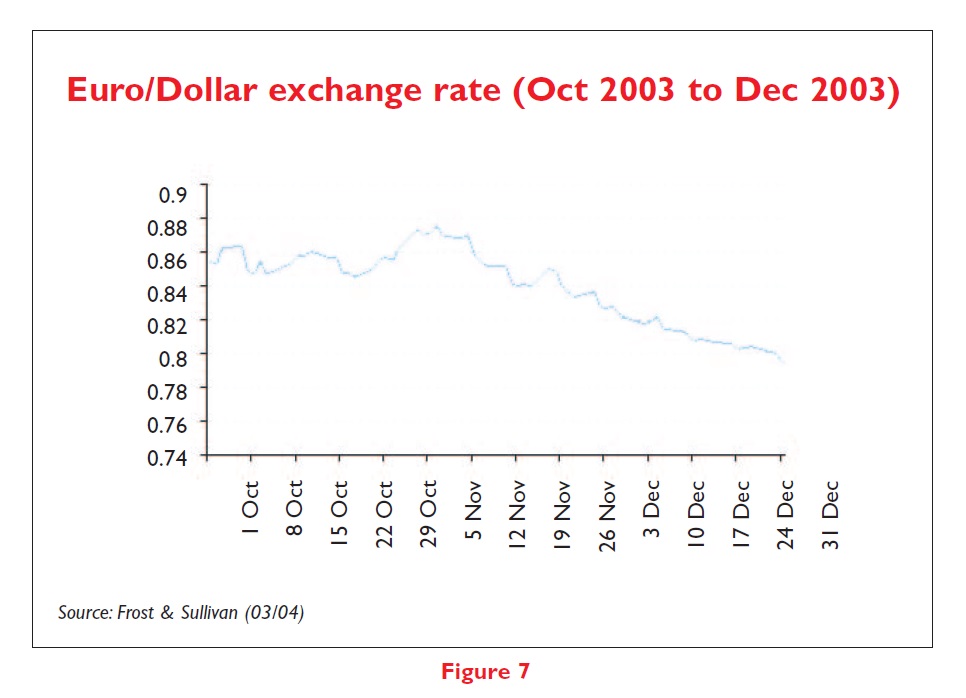 Of the top 15 vendors, Invitrogen experienced the greatest organic growth in 2003. Invitrogen continues to grow strongly, benefiting from numerous strategic acquisitions and an ever-growing product line. In 2000, Invitrogen’s revenues totalled just over $246 million, this is in stark contrast to the $778 million it reported in 2003. Its tradition of growth is expected to continue with the 2004 addition of BioReliance, a leading contract service organisation (CSO) that provides services for the development and manufacturing of therapeutic biologics.

Millipore also posted strong earnings in 2004. Sales for this manufacturer of purification products totalled $799.6 million, a 13.5% increase over 2002 revenues. With strong brand recognition as the premier vendor for water purification products, Millipore is also leveraging its technologies in the area of protein purification. With literally hundreds of promising biologics in the therapeutic pipeline, production and purification of these proteins will be a lucrative business for research product vendors.

In addition to being a difficult year for some competitors, 2003 brought success to several vendors of innovative technologies. Illumina, a manufacturer of bead-based arrays, benefited from the market’s growing focus on expression and genotyping technologies, and grew over 177% in 2003. Illumina’s single nucleotide polymorphism (SNP) detection products provide researchers with the ability to efficiently and inexpensively conduct large-scale genotyping experiments, a feature that has positioned this company well for the era of personalised medicine and pharmprotein array market.acogenomics.

Luminex, a manufacturer of bead-based protein array instrumentation, also had a successful 2003 and grew nearly 100% over 2002 revenues. Luminex does not manufacture reagents for its instruments; however, it has made numerous agreements that allow vendors to provide the Luminex platform with an endless supply of content. Access to array content is a key factor, crucial to the future success of vendors in the increasingly competitive protein array market.

In addition to innovative research tools, products and services that facilitate the development and production of biologic-based therapeutics will benefit from the markets changing focus. As the therapeutic pipeline fills with these potential drugs, companies such as Millipore and QIAGEN are looking to their protein purification products and technologies to drive growth. Likewise, services such as Roche’s Protein Expression Group (RPEG) are helping the pharmaceutical industry accelerate the drug discovery process by providing clients with proteins that are difficult to express or isolate.

Is the growth of proteomics and functional genomics technologies an indication of what is to come? Absolutely. As the age of DNA sequencing comes to an end, we are left with both a wealth of information and countless questions. Fortunately, we are also left with a myriad of new technologies, such as protein arrays and genotyping products that will help answer the difficult questions that lie ahead. Although it is unclear which solutions will dominate the market in the future, it is clear that we will rely on these technologies to make the discoveries that will lead to tomorrow’s pharmaceuticals. Furthermore, as we explore the capabilities of these technologies, look for them to have an increasing role in both diagnostics and clinical trials. DDW