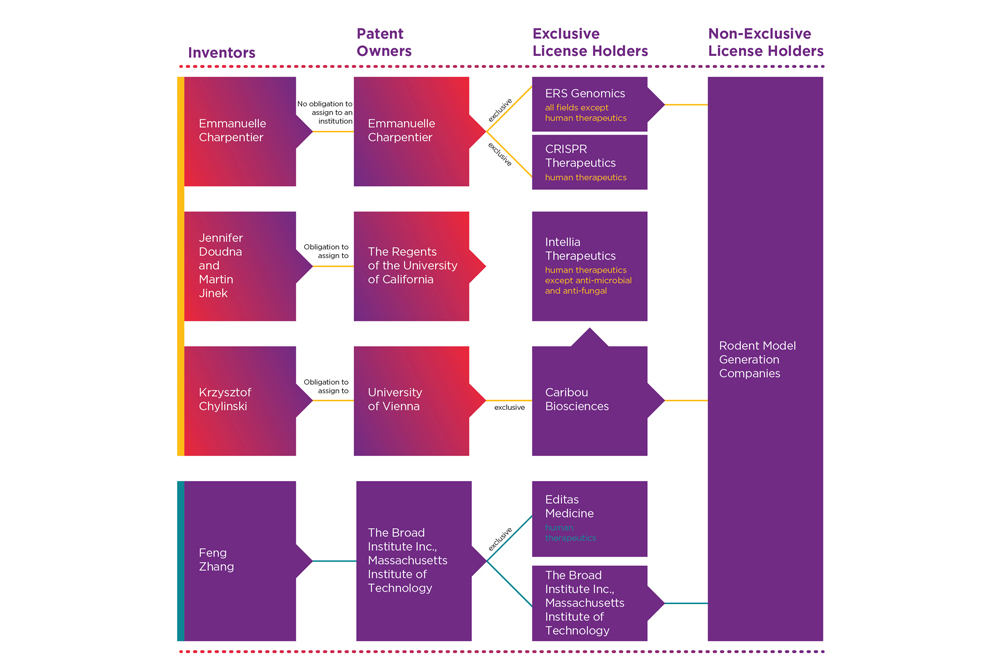 The growing complexity of preclinical research for drug development has yielded an increase in the number of genetically engineered models (GEMs) created for and by researchers.

There are many techniques commonly used to create GEMs, including but not limited to: transgenic technology, embryonic stem cell (ESC) manipulation, and CRISPR/Cas9. The CRISPR/Cas9 system, and variants of it, can introduce targeted mutations at specific sites within the genome that enable the study of genotype-phenotype relationships.

The generation of a novel mouse or rat model through CRISPR/Cas9 has gained popularity because study-ready cohorts are available in a shorter timeline and usually at a lesser expense. However, multiple patents cover the use of CRISPR/Cas9, and researchers looking to obtain or generate their own rodent model in this manner must be aware of the licensing situation. A comprehensive understanding of the patent history, key players, and intellectual property (IP) landscape surrounding this technique is critical for any investigator considering using this technology.

When evaluating a potential new animal model for experimental use, investigators must become educated about the IP landscape and corresponding risks associated with their desired model.

Proper due diligence of the IP landscape is always vital when acquiring or distributing a GEM, but especially in situations like the following:

While ESC-based gene editing is known as the “gold standard” for model generation, CRISPR/Cas9 can be used in place of this technique in certain instances and significantly reduce the timeline to cohort.

When acquiring or distributing a GEM generated using CRISPR/Cas9 technology, proper due diligence is key to understanding model transfer and licensing agreements. Before acquiring this model, it is critical to know where the model was developed and whether the entity that created the model involved any other parties in this process. Additionally, if more technologies were used alongside CRISPR/Cas9, then ensuring awareness of those techniques and their respective patent(s) is critical before working with the model.

Similar to many other model generation techniques, the CRISPR/Cas9 system has multiple claims to inventorship since its discovery as a genome-editing tool. In late 2011, Dr. Jennifer Doudna and Dr. Emmanuelle Charpentier began work on investigating CRISPR/Cas9 together, and this effort led to a patent application submission to the United States Patent and Trademark Office (USPTO) on May 25, 2012. The patent, titled “Methods and compositions for RNA-directed target DNA modification and for RNA-directed modulation of transcription” (US Patent No. 10,000,772), cited Jennifer Doudna (Berkeley, CA), Martin Jinek (Berkeley, CA), Emmanuelle Charpentier (Braunschweig, DE), and Krzysztof Chylinski (Vienna, AT) as inventors and The Regents of the University of California, The University of Vienna, and Emmanuelle Charpentier as the applicants.

Separately, Dr. Feng Zhang from the Massachusetts Institute of Technology and The Broad Institute worked on the CRISPR/Cas9 system in eukaryotic cells. This research led to a patent filing by The Broad listing Zhang as the inventor, titled, “CRISPR-Cas systems and methods for altering expression of gene products” (US Patent No. 8,697,359). Although the Broad was technically fourth to file a patent relating to CRISPR/Cas9 gene editing, it opted to pay the nominal fee required for an “accelerated examination,” resulting in the Broad being the first to obtain a granted patent on April 15, 20141.

Of note would be the specific language used in both patents; while the UC Berkeley patent states CRISPR/Cas9 can be used outside of bacterial and archaeal cells, it does not specifically mention the use of this technique in eukaryotic cells. Since the Broad’s patent specifically states that CRISPR/Cas9 can be used in eukaryotic cells, investigators or organizations intending to utilise CRISPR/Cas9 in animal models should maintain licenses to both patents in order to ensure proper coverage.

As shown in Figure 1, the investigators from both The Broad and UC Berkeley have formed numerous entities that maintain either exclusive or non-exclusive licenses to this technology. To utilise the CRISPR/Cas9 in a research setting, investigators and organisations must work with one of the companies listed that offers non-exclusive licenses. Therefore, before acquiring a CRISPR/Cas9-generated model, investigators must ensure that the organisation that developed and distributes the model has obtained the necessary licenses from the right entities.

How to obtain GEMs generated with CRISPR/Cas9 technology

There are some key considerations when acquiring a rodent model generated using CRISPR/Cas9:

The Broad permits the use of CRISPR/Cas9 technology for genome editing by non-for-profit researchers without requiring them to obtain a license to their patent portfolio. However, this is limited to non-for-profit researchers who do not intend to commercialise their models. Additionally, these models can be bred by and transferred between non-for-profit institutions and government agencies under the terms of the Uniform Biological Material Transfer Agreement (UBMTA) without requiring any licenses from The Broad.

Commercial entities are required to obtain a license to one or both of the aforementioned patents in order to utilise CRISPR/Cas9 technology to generate their own CRISPR/Cas9-modified rodents. The licenses obtained should also permit these companies to test potential drug candidates and therapeutics in these rodent models as well as breed them internally. However, if the commercial entity is only interested in generating a single rodent model through CRISPR/Cas9, a better path to obtaining this model may be acquisition from a model generation company.

Generating a mouse or rat through the use of CRISPR/Cas9 has been popularised as an easy, inexpensive, and fast alternative to traditional genome editing techniques. However, while this statement is partially true, CRISPR/Cas9 genome editing does require extensive knowledge, resources, and expertise in order to generate the correct GEM with no unwanted genomic effects. Model generation companies that specialise in custom model design are often relied upon to develop models using CRISPR/Cas9 technology for a variety of customers. The combination of experience with genome-editing tools, broad technical resources, and PhD-level research teams with extensive experience and the capability to create well-designed models are all essential factors for successful model generation. This setup is beneficial for both academic and commercial investigators who would like to conduct research in a novel GEM but do not have the decades of experience or resources to do so. For investigators in commercial organizations, the added benefit is that their companies would not need to pay for licenses to the patents to conduct research in models generated through CRISPR/Cas9. Reputable model generation companies will maintain multiple licenses to CRISPR/Cas9 to ensure that their customers have the appropriate coverage when using these models for their research.