Breakthrough in imaging drugs interacting with other molecules 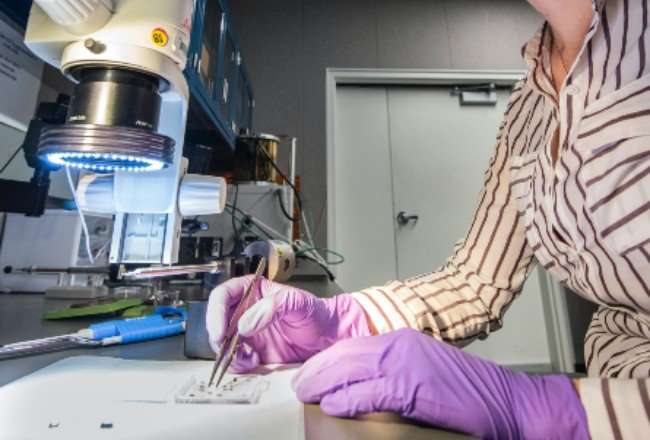 An electron microscope, reported to break new ground in biological imaging, is being installed at the Franklin’s new building on Harwel Campus. The machine can image biological samples at up to a million frames per second, which is one thousand times faster than the current standard.

It is the first of three instruments being developed jointly with electron microscope manufacturer, JEOL, and has been shipped to the UK from the company’s headquarters in Japan.

‘Ruska’ will work with biological samples both cryogenically frozen and in liquids, which will enable imaging of molecules in motion. By combining high speeds with liquid cells, the Ruska microscope will be able to ‘film’ proteins as they fold or image drugs interacting with other molecules. For cryogenically frozen samples, the frames captured as the beam passes through the sample will enable the creation of 3D models of biological structures, such as viruses or proteins.

The Correlated Imaging Team at The Franklin have taken an approach widely used in physical sciences and adapted it for use in biological imaging. The technique provides images at higher contrast than traditional transmission electron microscopy (TEM) imaging, but is more commonly used with materials such as semi-conductors or catalysts.

Correlated Imaging Deputy Director, Dr Judy Kim said: “We’ve already shown in initial experiments that we can use this technique to look at biological material. But the machine we were using wasn’t optimised for these kinds of samples. With the new machines, we’ll be able to refine the technique further. We’ll also be able to run very fast, to record data at close to a million frames a second, which will reduce the radiation damage visible on the sample.”

The machines are among the first equipment to be installed in the Franklin’s new building on the Harwell Campus, which opens fully later in 2021.

Correlated Imaging Director, Professor Angus Kirkland explained: “We’re looking at features that are smaller than the wavelength of normal visible light, so even tiny vibrations or changes in temperature can cause things to move. The machines have to be in a tightly controlled environment, so when we operate them, which we do remotely, there’s no risk of environmental interference.”

It will take several months of work to fully commission and calibrate the instruments once they are installed. A team of four will work full-time with the microscopes, including researchers from both physical science and biological sciences backgrounds. In addition, researchers based at the Franklin’s various partner institutions will continue to work on specific aspects of the new technology and processes, such as liquid cells.