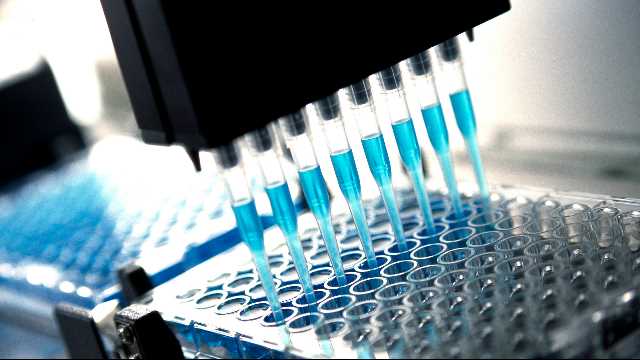 With current HTS focused on better quality hits, the necessity to differentiate between true and false results puts increasing emphasis on the robustness of the assay technology.

This article explores the common causes of assay interference, the effect they have on the main assay technologies used in HTS today and compares their performance relative to the other attributes that make for a good screen. No single technology is ideal in both respects, but fluorescence lifetime appears to offer some advantage in minimising compound-related interference.

Recent years have seen the maturation of high throughput screening (HTS) with the emphasis shifted from numbers screened to quality of the data and higher information content. This shift puts greater reliance on the assay or detection technology and its robustness in the screening environment. Assay robustness being the term applied to how the signal readout tolerates assay interferences in a real screening campaign. Critical in this assessment are the performance parameters (Z’, signal window [signal/background] and reproducibility) by which assay quality of the control signals from an HTS are judged (1).

But of equal importance, is the ability of the assay signal to avoid perturbation by the numerous nonspecific effects that can originate from the assay components, including the compounds themselves. These and other undesired interferences impact directly on HTS as false results (both positives and negatives), that equate to extra testing, which ultimately means more money and time have to be spent validating hits.

It is therefore not surprising that reagents manufacturers are focused on devising strategies to minimise the influence of these interferences on their assay technologies. Some of the key assay interferences, their cause and effect on signal readouts are summarised in Table 1. 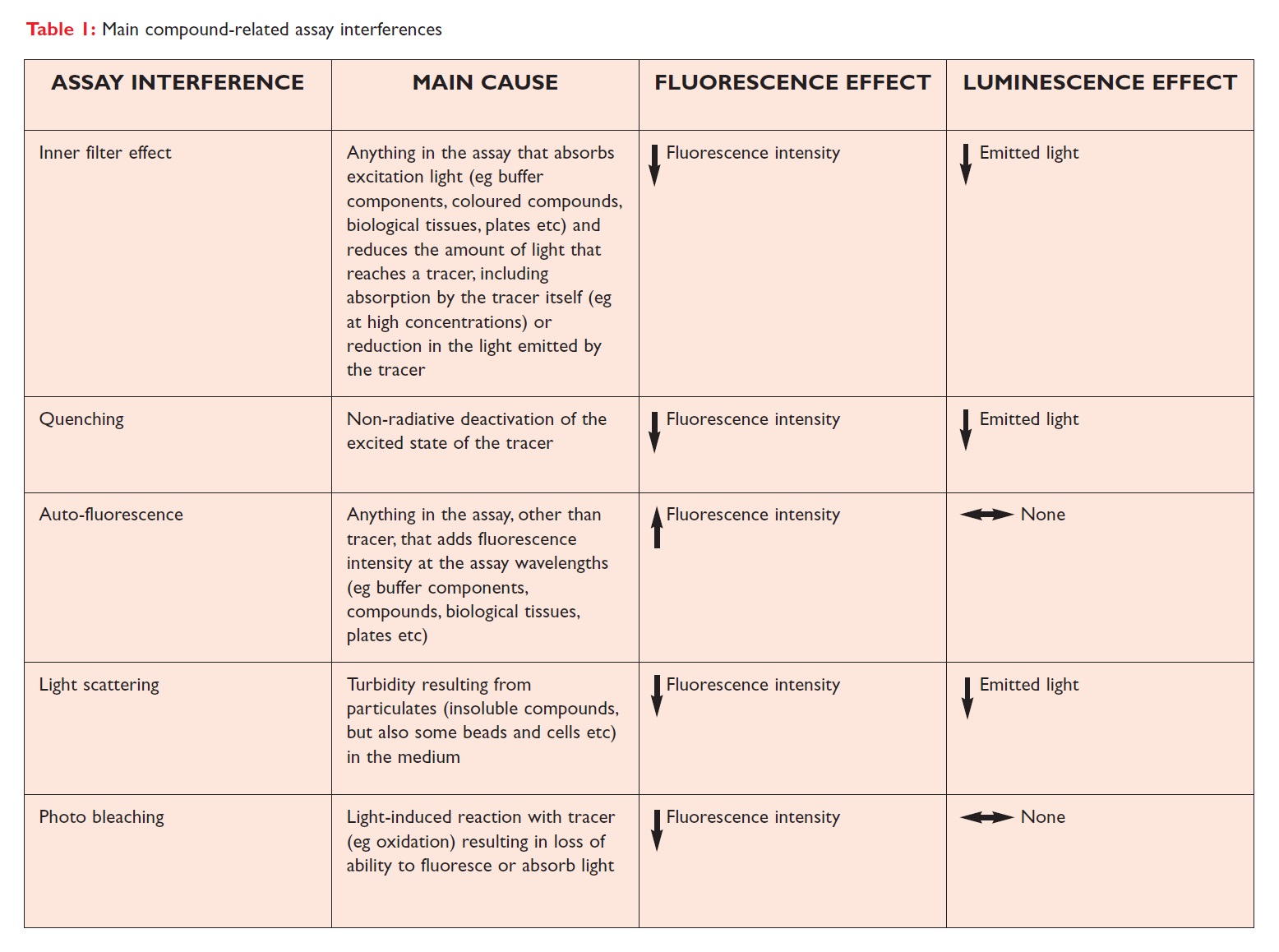 All of the interferences listed in Table 1 (apart from photo bleaching) can originate from the compounds themselves. A frequently misunderstood and wrongly named interference is ‘colour quenching’, which occurs when coloured compounds reduce light transmission through solution. More accurately this background absorption should be referred to as the inner filter effect, as it has nothing to do with true quenchers, which deactivate (quench) an excited fluorescent state of another molecular entity, either by energy transfer, electron transfer or by a chemical mechanism.

One of the most effective ways to minimise the interferences listed in Table 1 is by using a heterogeneous assay methodology (eg ELISA or DELFIA® based on TRF), where the multiple wash or separation steps effectively remove or significantly dilute out the compound or interfering matrix. However, such methodologies are multi-step and do not lend themselves readily to simple automation, ultra high throughput or miniaturisation. Hence, the desirability and greater importance placed in today’s HTS on homogeneous (mix and measure) technologies.

However, the fact that the compounds still remain with the assay when it is read necessitates the development of strategies to minimise their effects. These include the following:

– The use of longer wavelength fluorescent dyes, so-called ‘red-shifted’, with both emission and excitation maxima in the red region (>620nm), where less compound problems are usually encountered (eg Cy DyeTM; BODIPY TMR, ALEXA®).
– The use of red-emitting fluorophores eg Europium-doped scintillant in LEADseekerTM and Image Flashplate® in radiometric chemi-luminescence and Ruthenium in electrochemiluminescence.
– The development of technologies with a longer (red) excitation wavelengths than that of the light emitted (eg AlphaScreenTM).
– The use of a time-separating step, making it possible to discriminate between compound fluorescence, typically short-lived, and greatly extended fluorescent lifetimes eg of the lanthanides chelates used in TRF (eg Europium or Samarium).
– The development of ratiometric readouts (eg in FP and FRET) that try to self-normalise the interference effects.
– The combination of FRET with TRF in TRFRET (eg LANCETM and HTRF®).
– The better selection of filters specifically optimised to the assay dyes. It should be noted that longer wavelengths not only minimise auto-fluorescence effects but enable greater penetration of excited light through dense media ie reduce light scattering.

In Table 2 we point out where the main detection and assay technologies used in HTS today are limited in their application by the interferences described in Table 1 and other known assay limitations. Included in the other known limitations are those effects which influence the amount of sample (number of fluorescent molecules) that is visible to detection, this includes volume/meniscus and tracer concentration.

Background phosphorescence, which is typically in the far red (>650nm) is an issue for those assays that preferentially use white (titanium dioxide containing) microplates and red emission, it can be minimised in CCD imaging by dark adaptation of white plates, by using black plates and by the use of band-pass filters. Other limitations include handling problems such as temperature, light sensitivity and physical limitations like molecular size.

Based on the total number of listed limitations we have assigned a Signal Robustness Score, where low scoring technologies offer the greatest advantage in terms of circumventing potential interferences. According to the known limitations surveyed in Table 2, FLT is ranked as the most robust homogeneous assay technology. 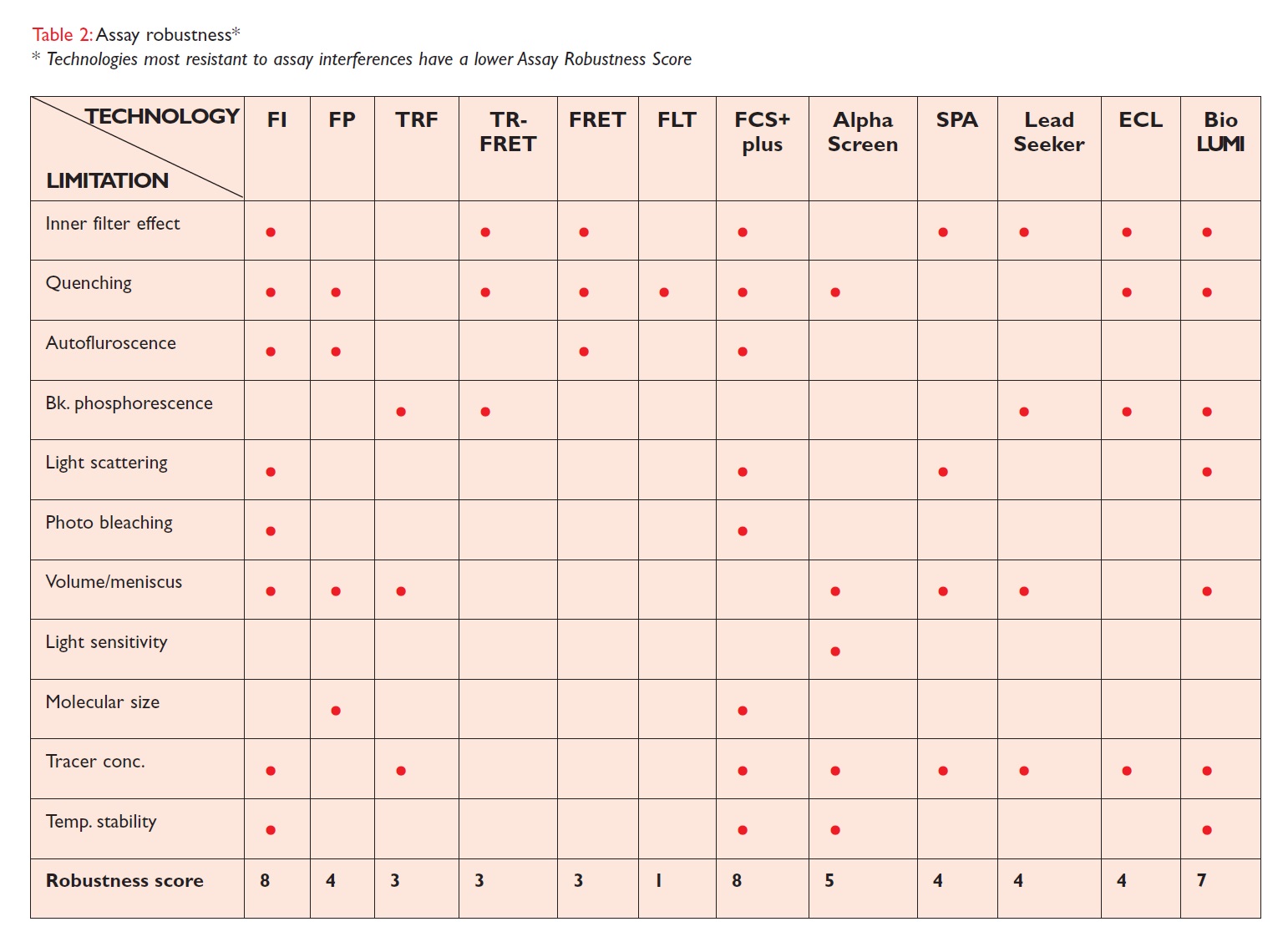 What this means to the end user is that lifetime is unaffected by the inner filter effect (including background absorption), light scattering and auto-fluorescence, all key interferences that can arise in problem compound libraries.

Quenching, by non-radiative means, potentially can cause problems for all technologies, except for TRF where the quencher may be removed and SPA/LEADseeker where the scintillant contained within the SPA bead is not directly accessible to the quencher. Equally important is the fact that FLT is unaffected by the other technology- related limitations that restrict the performance of AlphaScreenTM (volume/meniscus effects, tracer concentration, temperature stability and light sensitivity) and FP (molecular size).

Figure 1 shows the typical effect on the common assay interferences on a simulated FLT curve. 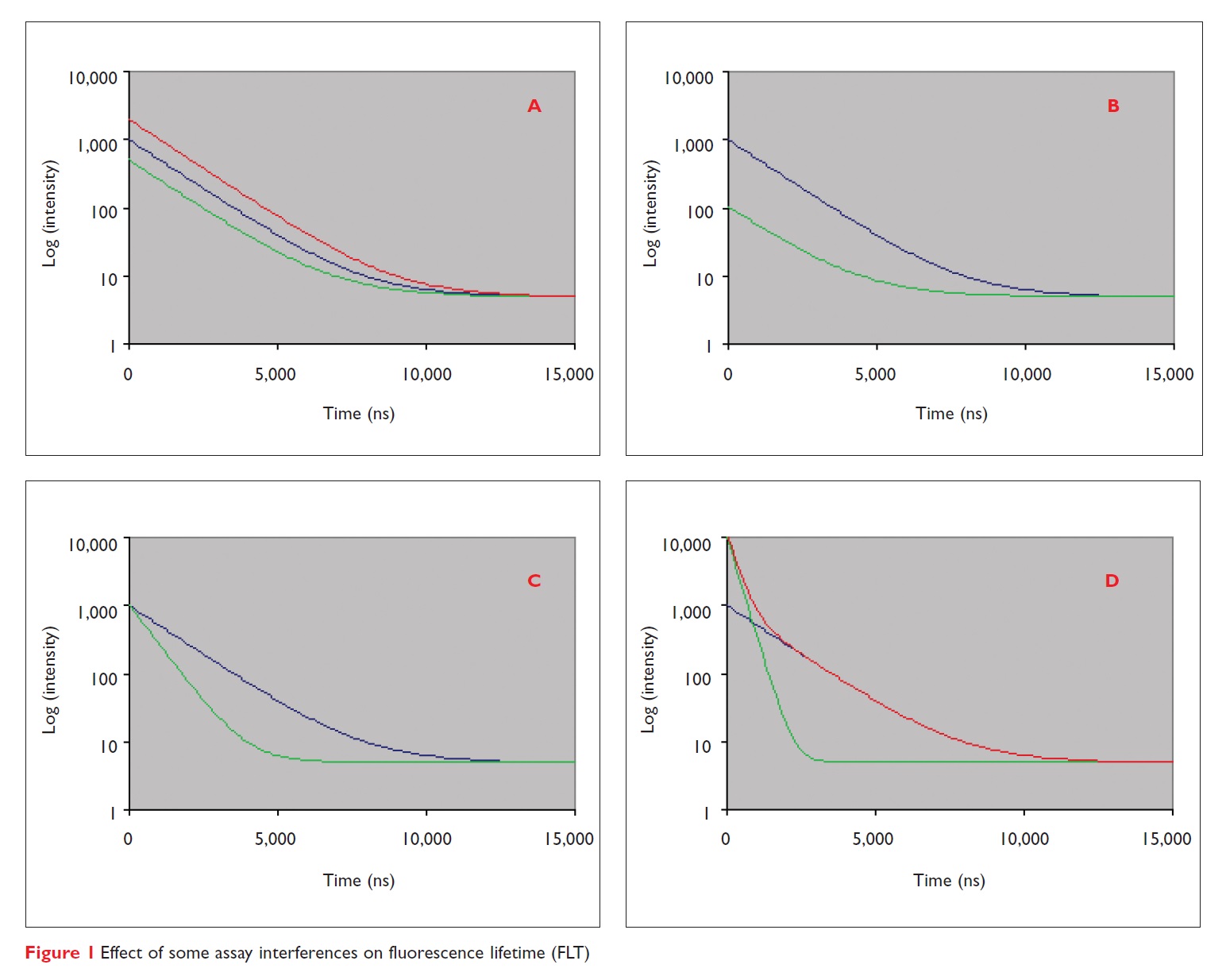 A relates to number of tracer molecules actually visible eg volume and meniscus effects. A basic fluorescence decay curve with a lifetime (t = 1.5ns) is shown in blue. The red is curve has the intensity increased by a factor of two, due to a larger dispensed volume or a flattened meniscus. The curve in green has the intensity reduced by a factor of two, due to a smaller dispensed volume or a more concave meniscus. B relates to the amount of light reaching the sample eg caused by inner filter effect, light scattering or photo bleaching in which the intensity is reduced.

In the green curve the intensity is lowered by a factor of 10 due to any of these effects, but the lifetime (t = 1.5ns) is the same as the unaffected blue curve. C relates to direct effects on the label eg a dynamic quencher, in which the lifetime is reduced proportionally to the total intensity (area under the curve), t = 1.5ns (blue curve) with quencher (green curve) t = 750ps and total intensity is reduced by a factor of two. D relates to auto-fluorescent compounds.

Shown are two different samples (blue and green) plus a bi-phasic curve which is the combination of these curves (red). Sample 1 (blue) is an assay tracer with a t = 1.5ns, sample 2 (green) is an auto-fluorescent compound which has a t = 300ps and an intensity 10 times sample 1. The two samples can easily be differentiated on the basis of FLT. Auto-fluorescent compounds can also show lower intensities than the tracer.

HTS fitness – suitability of an assay technology for screening

However, signal robustness alone does not make a detection modality into a useful HTS assay technology. In Table 3 we have complied an additional list of limitations that may mitigate against the adoption of particular technology in HTS. 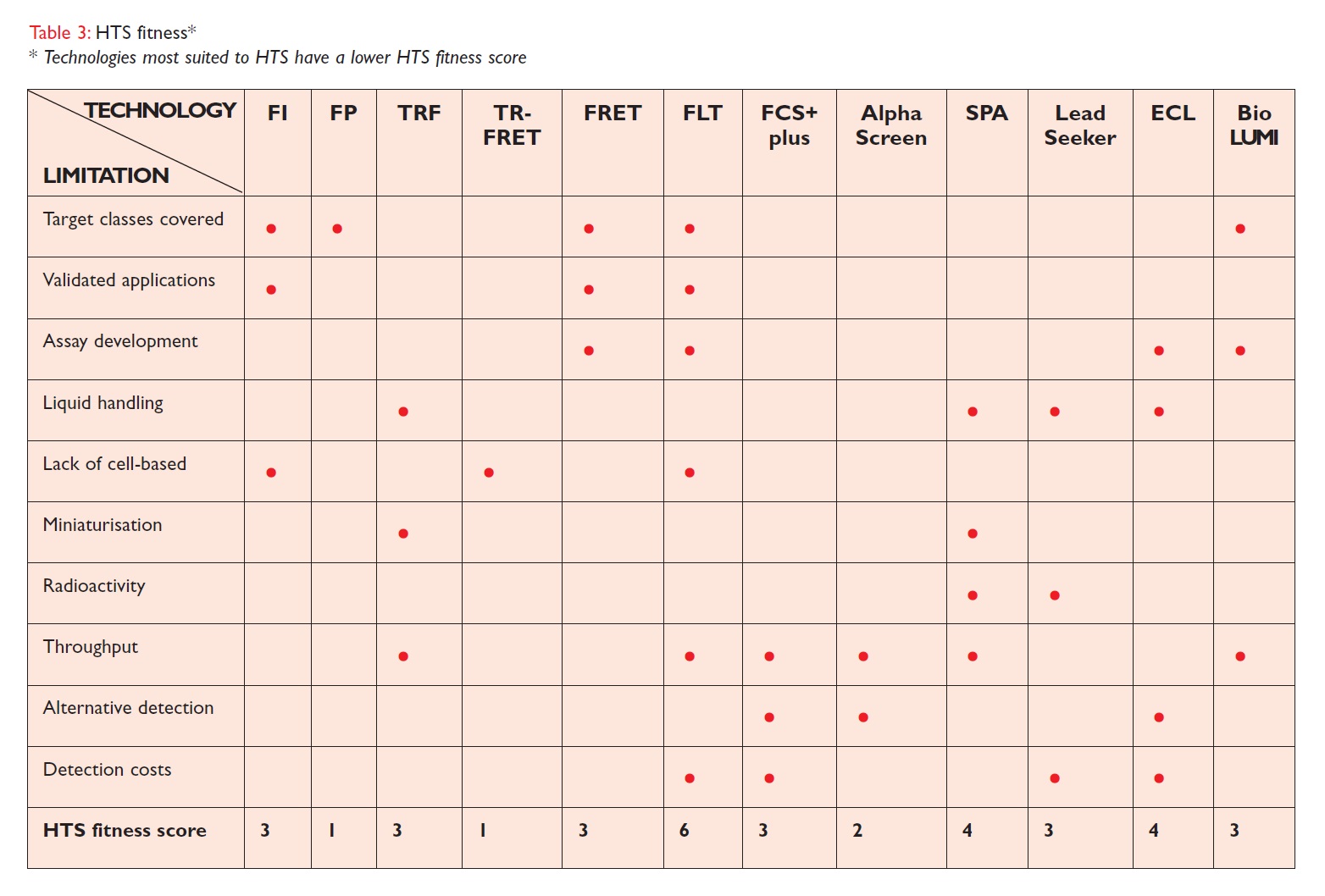 Based on the total number of listed limitations we have developed what we have termed the ‘HTS Fitness Score’, where low-scoring technologies offer the greatest advantage in routine HTS today. No attempt was made to include reagent costs in this comparison as it is now widely accepted that most vendors will significantly discount their product to at least 20¢ per data point to secure a significant HTS campaign order. According to the limitations surveyed in Table 3, FP and TR-FRET are ranked as the most HTS suited assay technologies, closely followed by AlphaScreenTM.

Technologies such as TRF which from a robustness perspective were rated as a good detection technology (score 3 in Table 2), scored less highly, relative to FP and TR-FRET and this reflects the fact that TRF is not miniaturisable, less easy to automate (because of multiple liquid handling plate washing or filtration steps) and as consequence is less suited to high throughput. The difference between Signal Robustness and HTS Fitness is most marked for FLT.

This is because FLT is still a relatively new detection technology (launched by Tecan on its Ultra Evolution reader in late 2002) with no validated applications or assay kits available to support it, and uncertainty still remains over the extent to the which the technology can be applied across the major target classes, although its suitability in protein-protein interactions has been shown (2). Interestingly, FLT is also a component available in the FCS+plus detection platform of simultaneous confocal readouts developed by Evotec Technologies.

FCS+plus includes the fluorescent readouts FI (brightness), FP, FRET (twocolour emission), FCS and FLT, and the simultaneous multiplexing of these readouts, eg FI and FLT. FCS+plus scored rather poorly on our Assay Robustness Table 2 as many of its individual component readouts are still subject to interference when read confocally.

However, Evotec is aware that the main source of false positives in screening today is auto-fluorescence and has developed strategies that do not involve excluding these autofluorescent compounds, but rather treating them using a multi-component fit (application of multiparameter fluorescence readouts, eg FLT and FI) and proprietary FCS+plus software algorithms.

FLT is also currently the subject of much ongoing work by Tecan and other vendors and we can expect most of the limitations that mitigate today against its HTS Fitness to be addressed over the coming year, including the future availability of specific tracers and assay kits optimised around their FLT characteristics. Microsecond FLT is also available on the IOM MicroScan reader. However, even if an assay technology has a low HTS Fitness Score its adoption will still be carefully scrutinised relative to the selection criteria listed in Table 4. 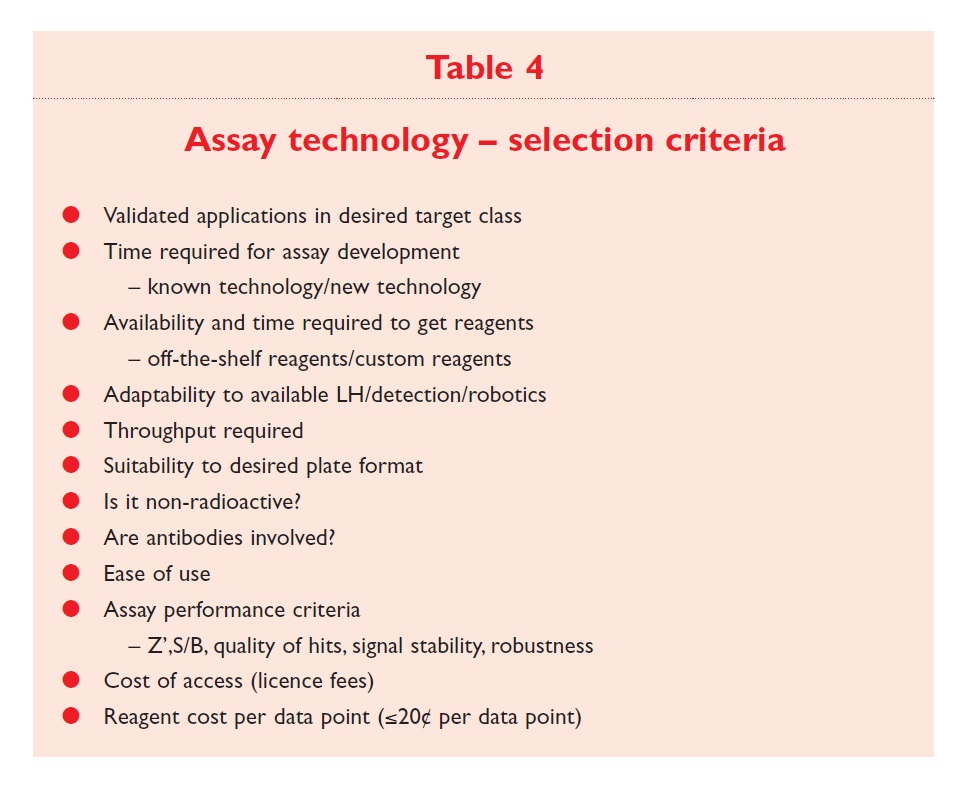 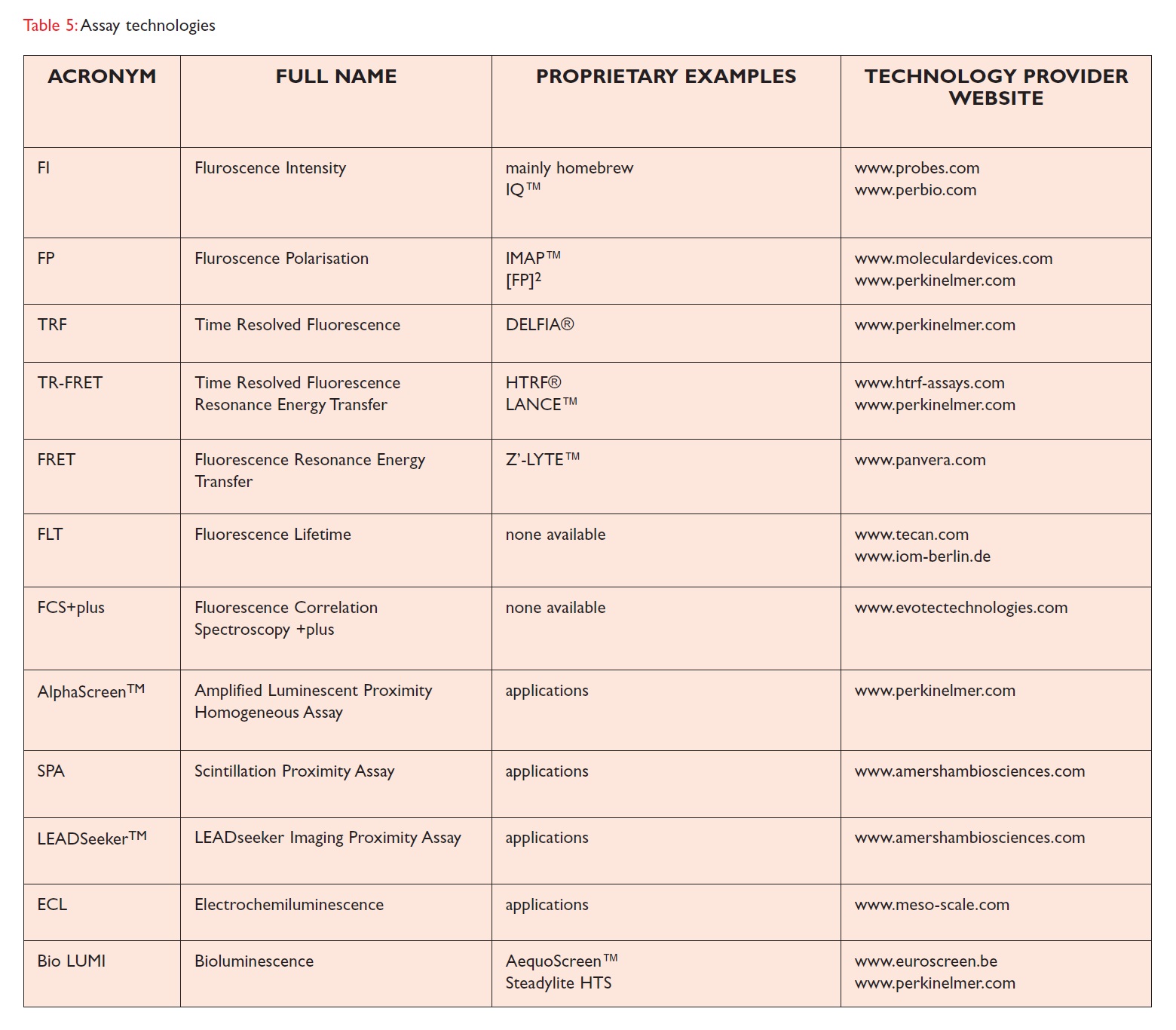 Most HTS labs rely on not one, but a repertoire of detection technologies, and are currently focused on:

Current interest in acquiring new technologies is therefore confined mainly to those that:

Based on FLT’s ability to circumvent assay interferences, the prospects for it being more widely used in screening looks promising once specific applications become available.

Acknowledgements
The author is grateful to Klaus Döring for helpful discussions.

This article originally featured in the DDW Summer 2003 Issue

John Comley is an independent consultant whose current clients are focused primarily on delivering novel enabling platform technologies (liquid handling, detection instrumentation and assay methodologies) to the HTS environment. Previously as Manager of HTS Technologies at PerkinElmer, Turku, he was responsible for the development of SmartStation. Dr Comley has more than 20 years’ experience in drug discovery and was formerly Principal Scientist at GlaxoWellcome, UK, where he pioneered assay miniaturisation. Dr Comley undertook post-doctoral work at the Universities of Vermont and Liverpool and has a PhD in Parasite Chemotherapy from Imperial College, London University.