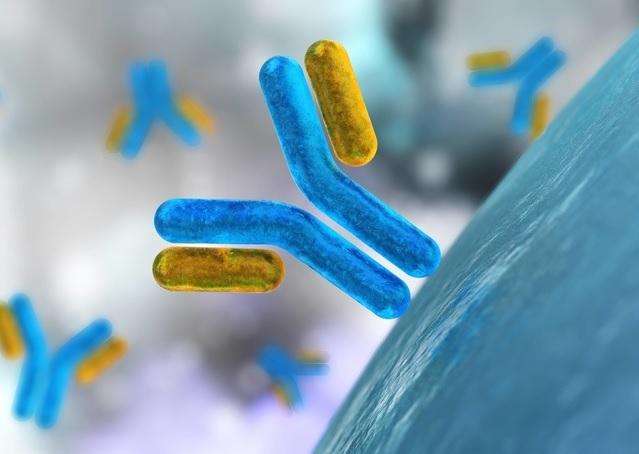 The innate ability of antibodies to bind their targets with high affinity and exquisite specificity is leveraged in the discovery of therapeutic antibodies to treat a broad range of diseases including cancer, autoimmune disease and heart disease.

In addition, antibodies are commonly used as companion diagnostics and reagents to support the therapeutic pipeline and to probe antigenic surfaces to inform vaccine design. Discovering antibodies with appropriate characteristics for a given purpose relies on their proper selection from the prolific number of clones that are routinely produced by modern antibody generation methods, including hybridoma technology in both normal and transgenic animals, phage display and synthetic libraries.

Triaging large panels of antibodies to a few leads is normally followed by substantial engineering to optimise their binding affinity, minimise immunogenicity and improve developability. This article reviews the current and emerging label-free biosensor tools that are used to characterise the binding interactions of antibodies in terms of their kinetics, affinities and epitope specificities from early stage screening to the clinic, with emphasis on throughput.

Within the animal kingdom, antibodies have evolved in jawed vertebrates (gnathostomes) to protect these organisms against pathogens and parasites (1). Antibodies bind their targets with high affinity and high specificity, which makes them appealing as both therapeutic agents and companion diagnostic reagents, and these products are generating lucrative sales in the pharmaceutical industry.

Antibodies are a class of specialised molecules produced and secreted by B lymphocytes in the immune system of an organism and their classical presentation is as a Y-shaped glycoprotein comprised of heavy and light polypeptide chains belonging to the immunoglobulin (Ig) superfamily of proteins. However, some species naturally produce other antibody formats, such as the small heavy chain-only fragments known as VHH or nanobodies in camelids (2) and the Ig new antigen receptor (IgNAR) in sharks (3).

Theoretical possibilities for unique-sequence antibodies are almost unlimited due to their architecture, where stretches of conserved framework residues descended from a limited set of germlines alternate with hypervariable ‘complementary-determining regions’ (CDRs), which are responsible for the enormous sequence and structural diversity of an organism’s antibody repertoire.

While antibody generation in the pharmaceutical industry is highly commoditised, with modern in vivo and in vitro libraries typically producing vast numbers of clones, the analytical tools used to characterise their binding properties in terms of kinetics, affinity and specificity, which are key parameters for assessing their quality and functional activity, lag orders of magnitude behind in throughput.

With therapeutic antibodies being the largest class of biotherapeutic proteins that are in clinical trials, there is an ever-increasing demand for higher throughput analytical methods that can match the capacity of antibody production and guide the library-to-leads triage. Since taking an antibody from bench to the market is estimated to cost about $1 billion, there is a need to make antibody screening more efficient and comprehensive to cut costs and timelines.

Label-free biosensors such as those based on optical detection principles such as surface plasmon resonance (SPR) or biolayer interferometry (BLI) are routinely employed in the pharmaceutical industry to characterise antigen/antibody binding interactions in terms of their kinetic rate constants and affinities (4). Knowledge of an interaction’s affinity is significant because it dictates the dose or concentration at which an antibody will be efficacious (5). Oftentimes, selecting an appropriate affinity for a given application is an empiric process and can be optimised by engineering.

Dissecting a binding affinity into its constituent kinetic rate constants provides useful information that can guide the evaluation of an antibody’s performance throughout screening, optimisation and manufacture. Label-free methods obviate the need to label or conjugate either of the interacting species and the binding event is monitored in real-time. This makes it ideally suited for screening crude antibody samples that are produced in early-stage research, where numerous clones are available, but in limited quantities.

Commonly-used commercially-available biosensor platforms differ in their throughput, sample consumption and ease of use. They are versatile tools and are applied to the study of a broad range of biomolecular interactions, from small molecules to antibodies. Unlike small molecule analysis, where binding interactions are generally transient with weak affinities, as characterised by equilibrium dissociation constants (or KD values) in the micromolar range, antigen/antibody binding interactions often exhibit affinities that are a millionfold tighter, with KD values in the picomolar range.

Accurately measuring the kinetic rate constants of high affinity interactions requires long binding cycles to enable sufficient information to be gathered for both the association and dissociation phases (6). Therefore, biosensor platforms that increase the number of interactions monitored in parallel can significantly accelerate the analysis of large panels of antibodies.

A recent study benchmarked the Mass-1 system from Sierra Sensors against the Biacore 4000 system from GE Healthcare and found comparable kinetic rate constants for a large panel of antigen/antibody interactions when chip types were matched (7). However, with the throughput of these two state-of-the-art instruments limited to monitoring only eight interactions at once via parallel flow channels, these analyses not only consume significant quantities of samples but necessitate long run times when addressing hundreds of interactions, making the analysis of more than 100 clones rather tedious.

As such, SPR is often used as a secondary tool, after large antibody panels have been whittled down to a subset of clones via preliminary screening by higher throughput, but lower information content assays, such as ELISA, which is an end-point analysis lacking real-time kinetic information. ELISA also is prone to a high false hit rate, especially when targets are adsorbed directly to plastic which may expose irrelevant, denatured epitopes or mask native ones. In addition, the use of several wash steps may also compromise the ability to identify weak affinity binders, which may have desirable epitopes.

Another option is the Octet HTX platform from Pall/ForteBio, which is a 96-channel BLI biosensor offering versatility in throughput from 8, 16, 32, 48 to 96-channel modes. Since each interaction necessitates the use of single disposable sensors, running the system in 96-channel mode is costly on sensors and sample consumption scales with the size of the assay. Also, the lack of microfluidics affects the accuracy with which binding kinetics can be measured, because they are often contaminated by rebinding artifacts, which confound a reliable and detailed analysis (8).

Indeed, a study by Estep et al in 2013 stated that, “When measuring affinities based on currently available methods, one must compromise either on throughput or accuracy”, which unfortunately has posed a bottleneck in analytics for decades (9). In that paper, they compared the affinities of antigen/antibody interactions measured by orthogonal techniques, namely the BLI-based 16-channel Octet RED384 platform and low and high throughput solution affinity methods, respectively the Kinetic Exclusion Assay (KinExA) and Meso Scale Discovery (MSD).

The authors reported an excellent correlation between KinExA and MSD affinity determinations when sufficient time was allowed for the interacting samples to reach equilibrium. In contrast, the correlation with BLI was rather poor, as it consistently underestimated the affinity of low-picomolar antibodies, reaching an apparent affinity limit at 100pM, likely due to a combination of loading level limitations and rebinding artefacts.

While binding affinities determined via both MSD and Gyrolab platforms (10) have shown excellent correlation with KinExA measurements, these equilibrium-based assays rely on secondary detection, so are not considered label-free, even though the interaction being measured is performed in solution phase. Affinity-ranking can help triage clones, but oftentimes, dissecting affinities into their kinetic components, as provided by real-time biosensor analyses is important in evaluating clones for a given MOA.

To accelerate the kinetic screening of a large panel of antibodies, Array SPR has been gaining popularity as evidenced by several publications reporting kinetic and affinity measurements collected on single arrays comprising 96 or more clones (11,12). These highly parallel analyses employ a ‘one-on-many’ ‘analyte-on-ligand’ assay format that not only speeds up kinetic measurements, but is also very efficient on antigen consumption, necessitating only a single aliquot per analyte concentration to perform a kinetic analysis on a large array of antibodies. Indeed, measurements performed on Carterra’s Array SPR biosensor support 384 antibody arrays as standard and deliver high quality binding data, as shown in Figure 1.

Using SPR to characterise the binding specificity of antibody interactions

Furthermore, since an antibody’s epitope cannot be shifted or optimised by engineering in a rational way, it is advantageous to survey the epitope landscape of an antibody library at the earliest possibility to identify and move forward only those clones exhibiting the most appropriate epitopes or a variety of epitopes that can be tested in functional assays to converge upon leads. From an intellectual property perspective, claiming novel epitopes enables companies to have an edge in the fiercely competitive market of therapeutic antibody discovery, with multiple companies often working on the same targets, as evidenced by the clinical pipeline.

There are many analytical techniques available for characterising an antibody’s epitope, with the gold standard for precise epitope determination provided by atomic-level structural data produced by x-ray crystallography and cryo-electron microscopy. However, these methods are labourintensive and slow, and therefore used as confirmatory tools, rather than research-based ones. More practical methods include epitope mapping using libraries of antigenic variants produced by display methods (15,16).

A facile and quick way of identifying antibodies that cluster into epitope families is provided by epitope binning experiments which can be performed in high throughput and with low sample consumption on biosensors. Epitope binning is a competitive assay where antibodies are tested in a pairwise and combinatorial manner for their ability to bind simultaneously to their specific antigen. If both antibodies can bind at the same time, they are presumed to target distinct, non-overlapping epitopes, whereas if one appears to block the other, it is inferred that they compete for overlapping or similar epitopes.

With the now routine implementation of label-free biosensors for epitope binning, there is a need for higher throughput platforms that enable more antibodies to be tested in a single assay to explore the depth and breadth of an antibody campaign in a comprehensive manner. BLI-based platforms are commonly used for epitope binning but since sample consumption scales with the size of the antibody panel investigated, these assays are often limited to rather small panels (17) (Figure 2). 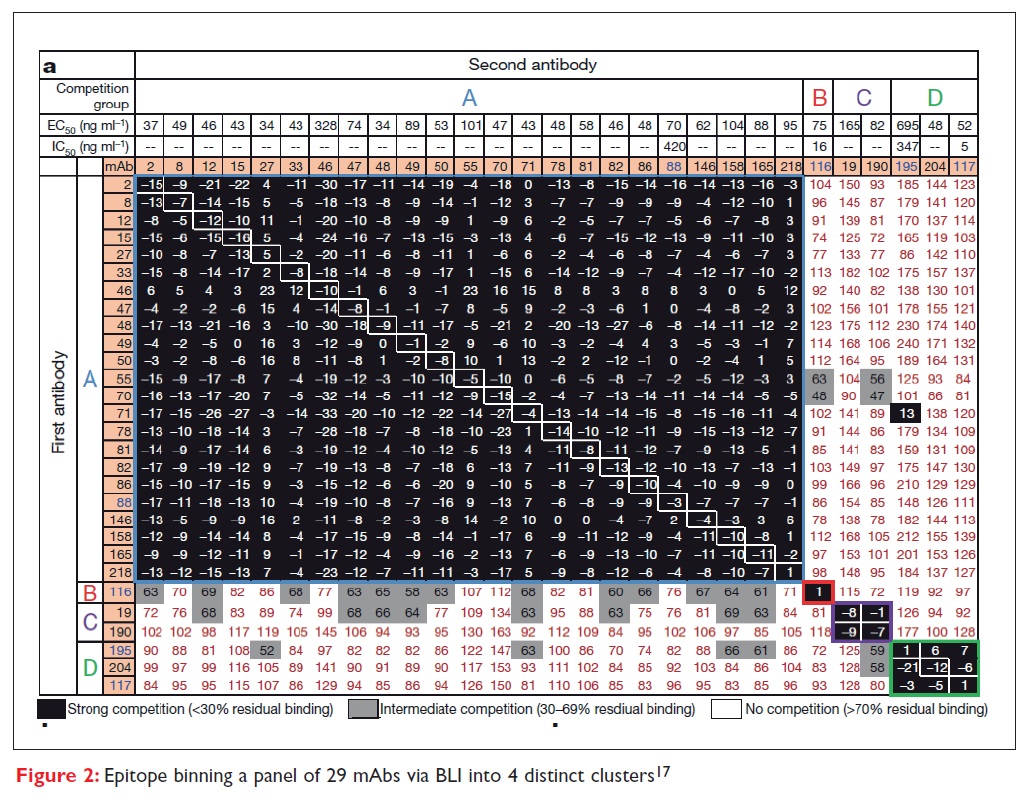 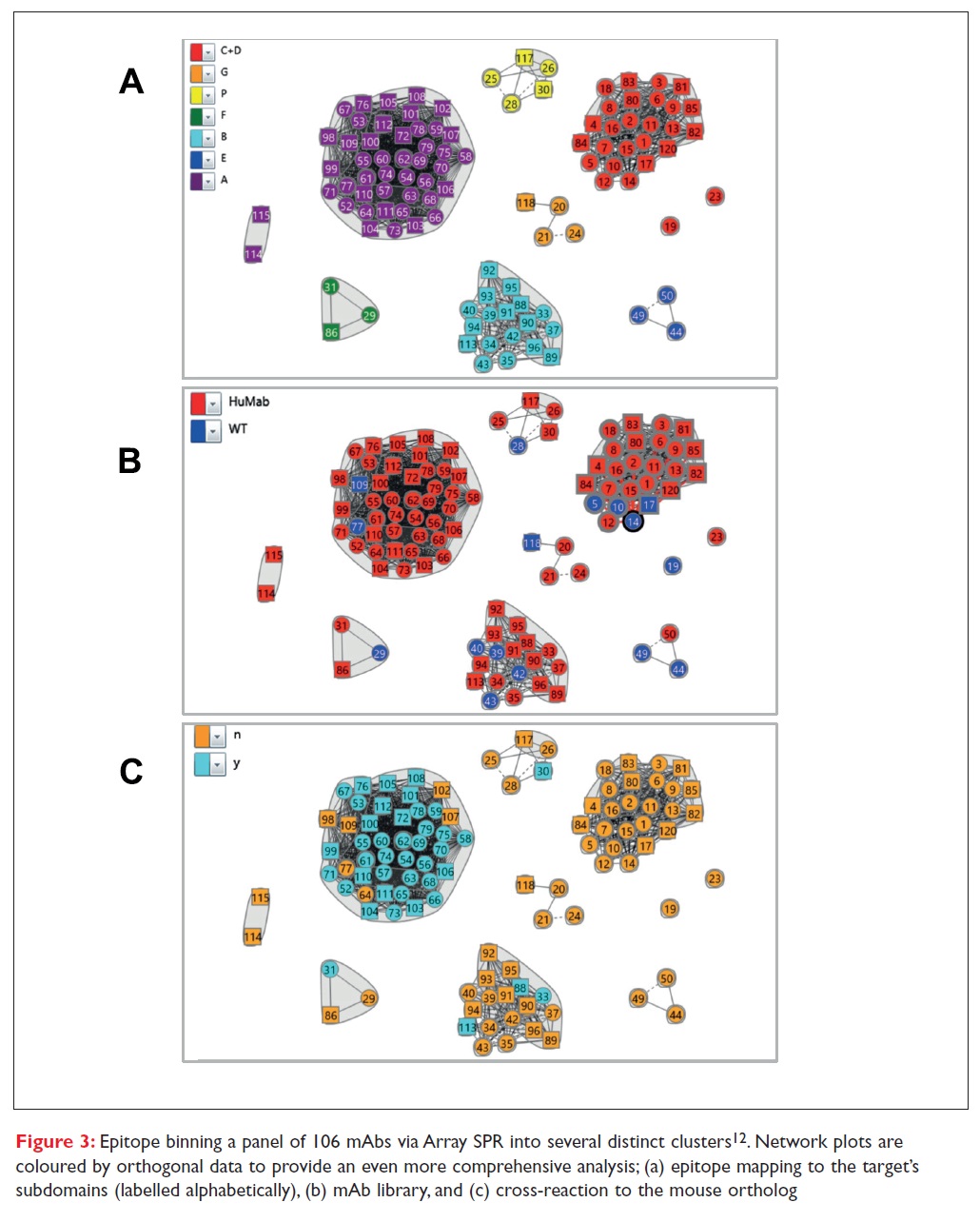 The demand for higher throughput analytics is needed to support the paradigm shift that is emerging in the industry towards a deeper appreciation of the epitope diversity offered within an antibody library by applying higher resolution and higher throughput methods for epitope characterisation at the earliest stages of research. This enables the identification of uniquely-suited clones and minimises the need for their extensive engineering, which streamlines library-to-leads and ultimately cuts costs to patients by delivering medicines faster. DDW

This article originally featured in the DDW Summer 2018 Issue

Dr Yasmina Noubia Abdiche is Chief Scientific Officer at Carterra. Dr Abdiche joined Carterra as CSO in 2016 after 12.5 years’ experience in the pharmaceutical industry at Rinat-Pfizer, where she led a group of analytical scientists that applied label-free biosensors to the discovery of therapeutic antibodies. Dr Abdiche is co-inventor of several therapeutic antibodies in clinical trials.