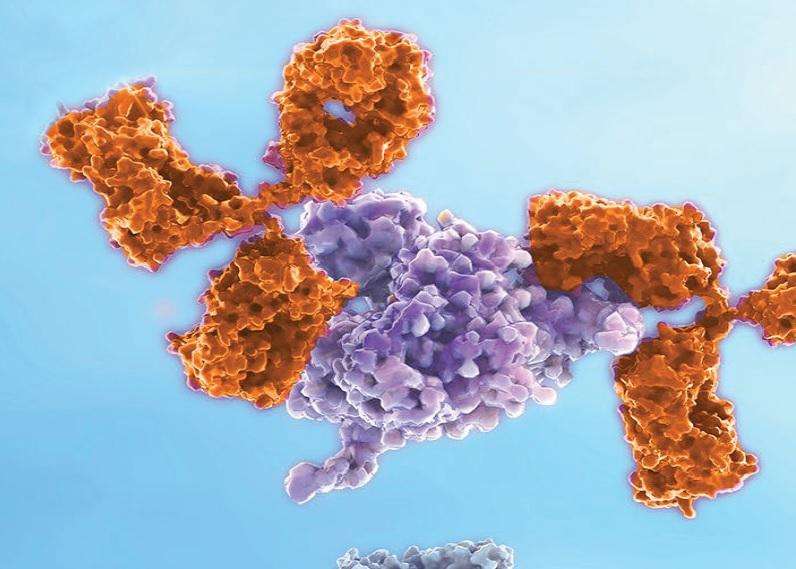 Antibody-based therapeutics are the fastest growing and most successful therapeutic modality for treating diseases such as cancer, cardiovascular disease, autoimmune disorders and infectious disease.

It is predicted that by the year 2020 there will be 70 therapeutic antibodies on the market, generating revenue of $125 billion (2). The success of this class of drugs stems from innovative technical advances in antibody engineering and development, including display screening technologies, bispecific antibodies, and antibody drug conjugates. These technical innovations, combined with significant scientific advancements toward our understanding of the complex molecular mechanisms underlying human disease, present new opportunities for improving human health with antibody therapeutics.

The continued advancement in this field is dependent on the successful discovery and development of novel therapeutic antibody candidates. These efforts are being driven by scientists in discovery labs from pharma, biotech and academics, who need powerful tools that can deliver rapid, multifactorial results to fully understand the ability of candidate antibodies to interrupt the cellular and molecular processes leading to disease states.

In this white paper, we describe how the iQue Screener, the fastest suspension based high throughput screening system available, is used to perform multiplexed screens for antibody binding to either cell surface or to circulating target antigens. We will also discuss the use of the same platform to carry out high content assays to evaluate the effects of lead candidates in multiplexed cell based and secreted protein assays.

Because therapeutic antibodies are large biologic molecules, their molecular targets are usually extracellular, either on the surface of cells or circulating in blood or other tissues. Screening hybridomas and other libraries for antibody binding to each of these types of targets has historically involved the use of enzymelinked immunosorbent assays (ELISAs). ELISAs were developed over 40 years ago, and have been a staple in antibody screening labs.

ELISAs are performed by coating a single target antigen onto the wells of assay plates, followed by addition of individual samples from an antibody library (e.g., hybridoma, phage display). Wells containing antibodies that bind to the immobilized antigen are detected through a change in color due to an indirect enzyme/substrate reaction.

While robust and relatively straightforward to run, ELISAs have a number of disadvantages that can limit the success of modern antibody screening labs:

• Primary screens that test binding to a single antigen require subsequent secondary and sometimes tertiary screens with control antigens to confirm specificity and/or crossreactivity.
• ELISAs are not ideal for screening antibodies that bind to cell surface antigens, because these antigens are extracted from the cell membrane and purified before adsorbing to the plastic ELISA plate. This often leads to disruption of conformational epitopes that can be important targets for therapeutic antibodies.
• Finally, in order to minimize background signal, ELISAs require multiple wash steps to remove unbound antibodies and detection reagents, resulting in long, laborintensive screening workflows. 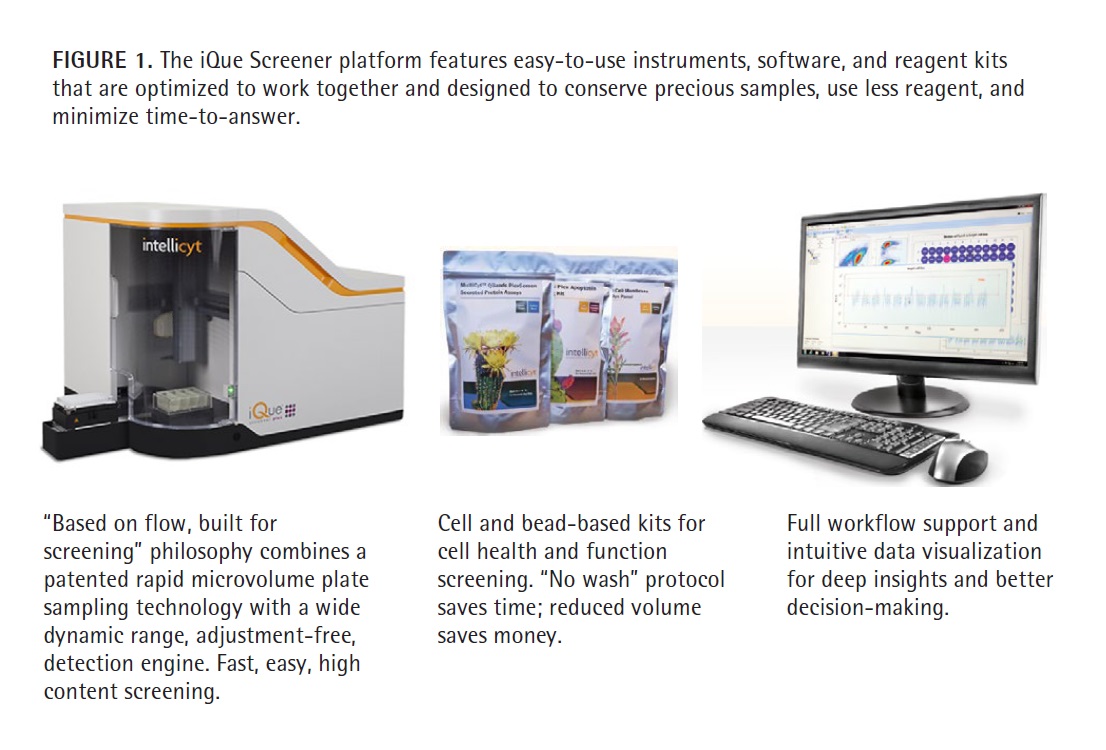 Recent advances in assay technology are beginning to transform the antibody discovery process. At the center of these advances is the ability to perform multiplexed, multiparameter assays at high throughput screening speeds. By collecting more information in primary screens, scientists are able to simultaneously identify hits based on specificity and cross-reactivity. Inclusion of more information early in the screening process builds confidence in potential hits, and increases the likelihood that candidate molecules will successfully proceed through downstream steps in the discovery and development process.

The iQue Screener (Figure 1) is a high throughput screening platform based on flow cytometry that rapidly processes samples in suspension.

Encoding Technology – Screen Against Multiple Antigens in Every Well

The Intellicyt iQue Screener was designed to perform high throughput assays with cells and beads in suspension, which enables a powerful multiplexing approach known as encoding technology (3). With encoding technology, scientists can combine multiple populations of cells or beads bearing different antigens of interest into the wells of assay plates, and screen against multiple target antigens in the same experiment. This greatly increases the power and robustness of antibody screening campaigns, and allows for an enhanced screening workflow. Figure 2 illustrates encoding technology and its use in antibody screening assays. 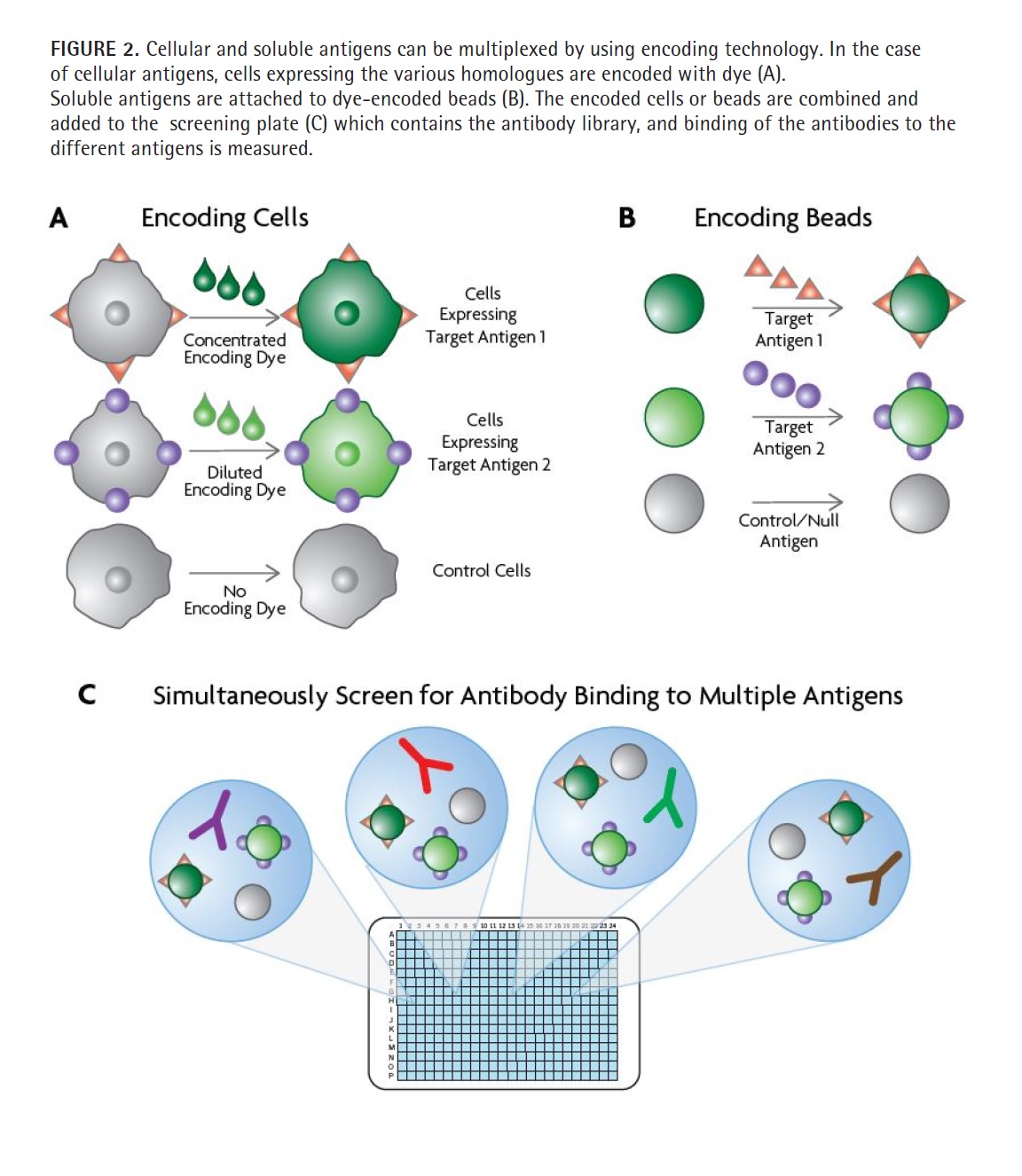 1. Simultaneously test antibodies for binding to target and control antigens.

This provides an internal reference control within each well, which improves confidence in hits. Also, including control antigens in primary screens can lessen the need for secondary counter screens, which streamlines the overall antibody screening workflow.

Encoding can also be used to screen a single library against multiple unrelated antigens. Assay plates can be set up containing encoded cells or beads presenting different antigens of interest. Multiple antibody libraries can then be tested in the same screen, greatly improving the overall workflow

Following are some examples of how the iQue Screener is being used to perform more effective antibody screens, increasing the chance of discovering lead candidates that will be successful in the clinic.

Simultaneous Screening Against Target and Control Antigens on Intact Cells

In this example, two cell lines were used, one expressing a control antigen and one expressing a target antigen. Cells expressing target antigens on their surface were stained with a green fluorescent encoding dye, and cells expressing negative control antigens on their surface were left unstained. The cells were mixed together and distributed into wells of the assay plates. Test antibodies were added to the plates and following a 30 minute incubation, anti-IgG antibodies labeled with a red fluorescent dye were added to the wells to detect test antibodies bound to each cell type. After a one hour incubation, plates were read on the iQue Screener and data were analyzed using ForeCyt software (Figure 3). 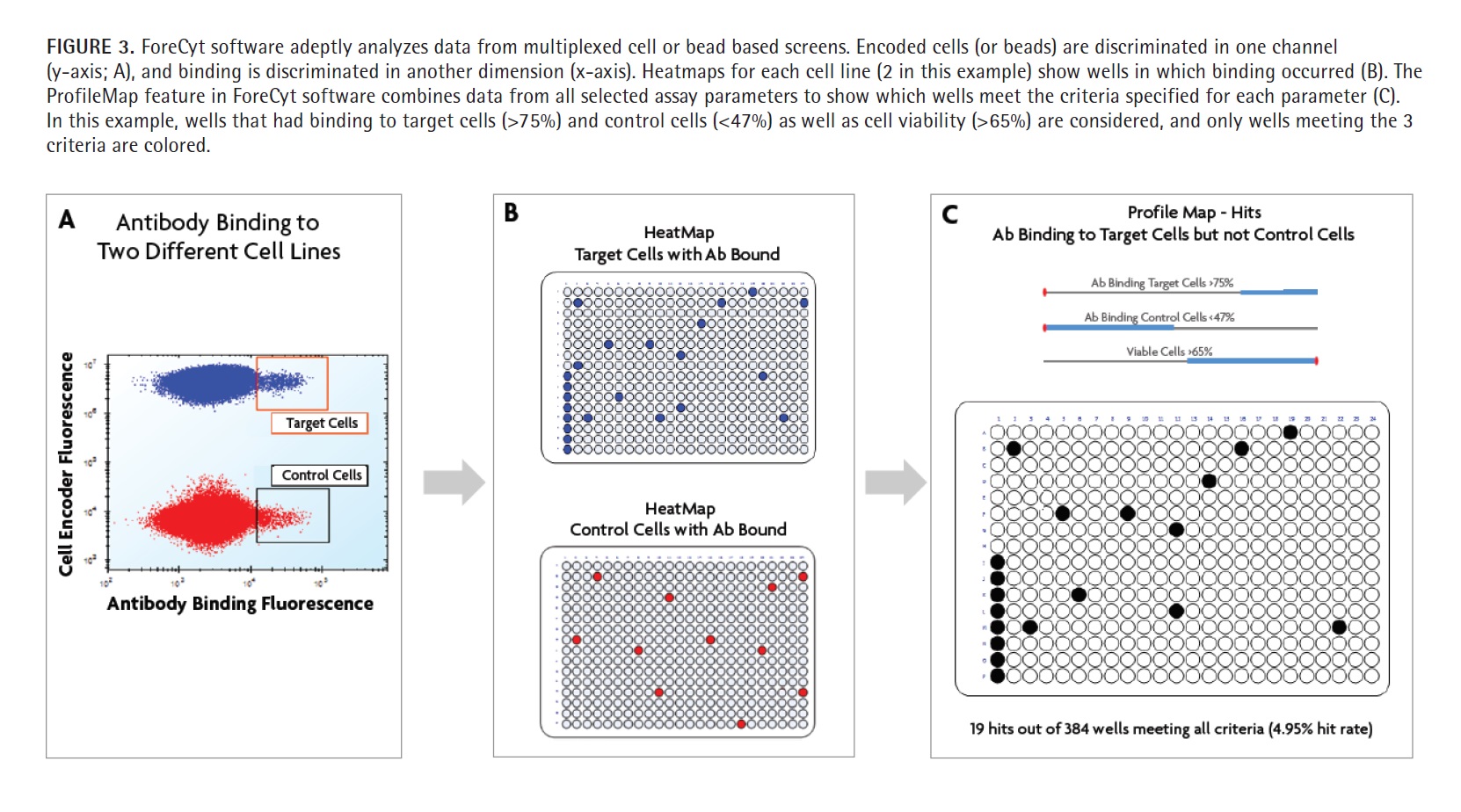 Figure 4 demonstrates the use of multiplexed cell based assays by scientists at Xoma Corporation to identify antibodies that react with a cell surface receptor from different animal species. Plate read times of five minutes or less, combined with encoding technology, enables large scale experiments to be performed in short time frames. 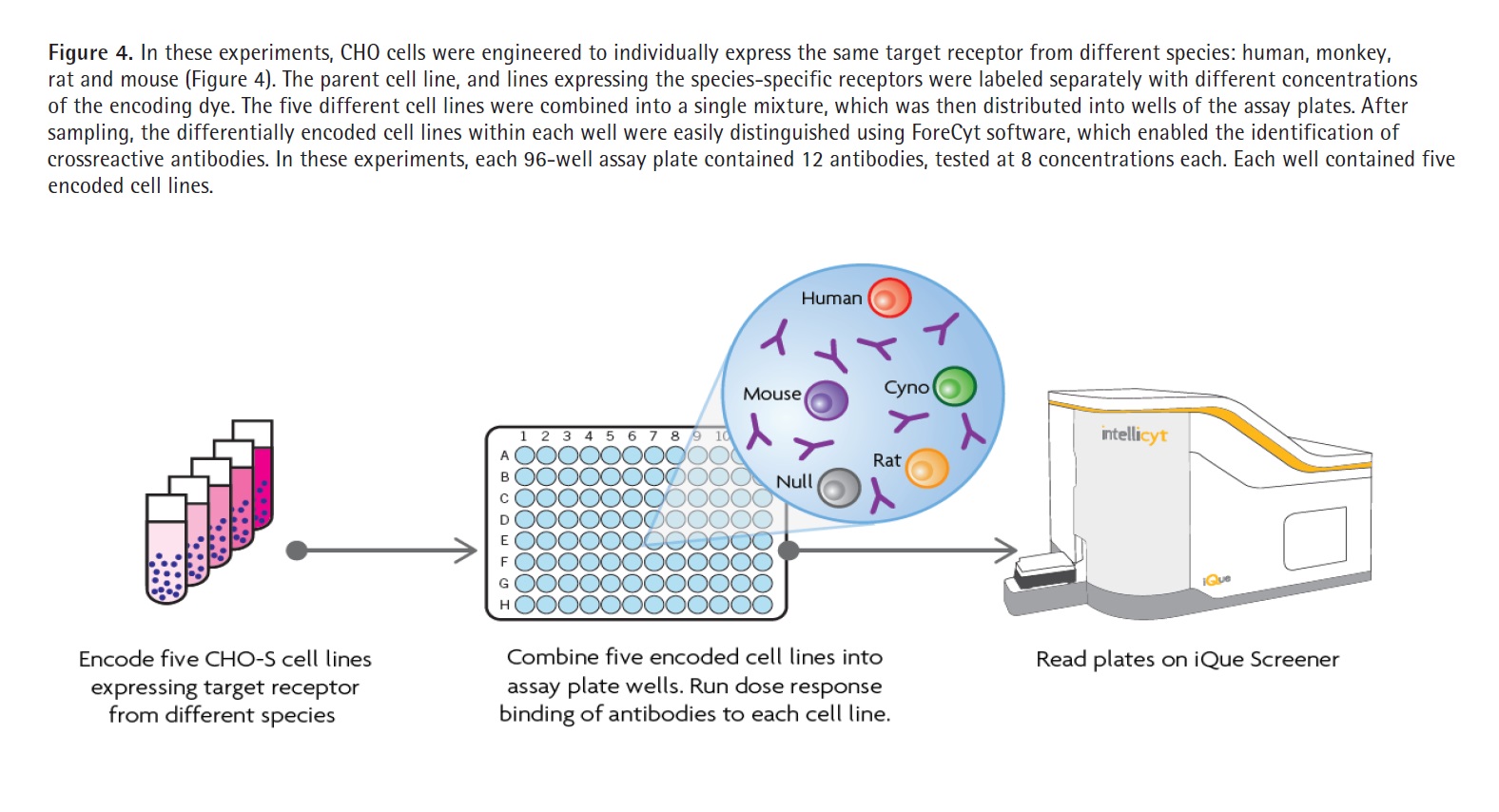 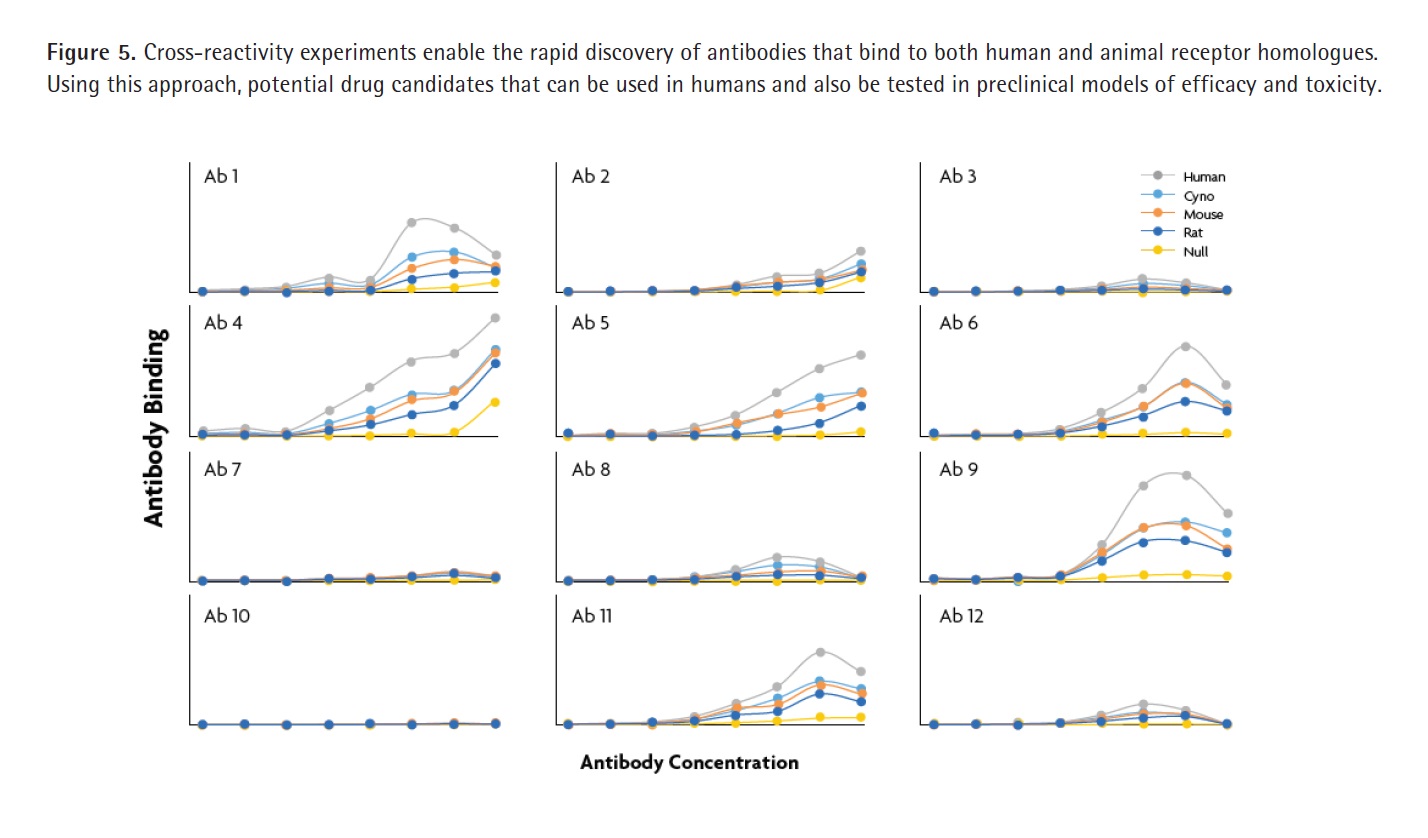 Affimers developed by Avacta Life Sciences are small engineered binding molecules designed to be more robust than antibodies, and with Intellicyt technology they can be generated very rapidly. Figure 6 demonstrates the use of multiplex bead-based assays by scientists at Avacta to screen affimer libraries generated from phage display panning outputs for cross-reactive binders to different mouse and human immune checkpoint molecules.

Compared to running traditional ELISA based format, combining 5 binding assays in each well reduced the amount of protein required for each target 166-fold, the number of plates required for the total screen 20-fold and reduced the total primary screen time 5-fold. The time to perform the entire screen was less than one hour. Running this same screen using single-plex ELISA assays would have required ten 384-well plates (or forty 96 well plates) and several mg of each target protein. 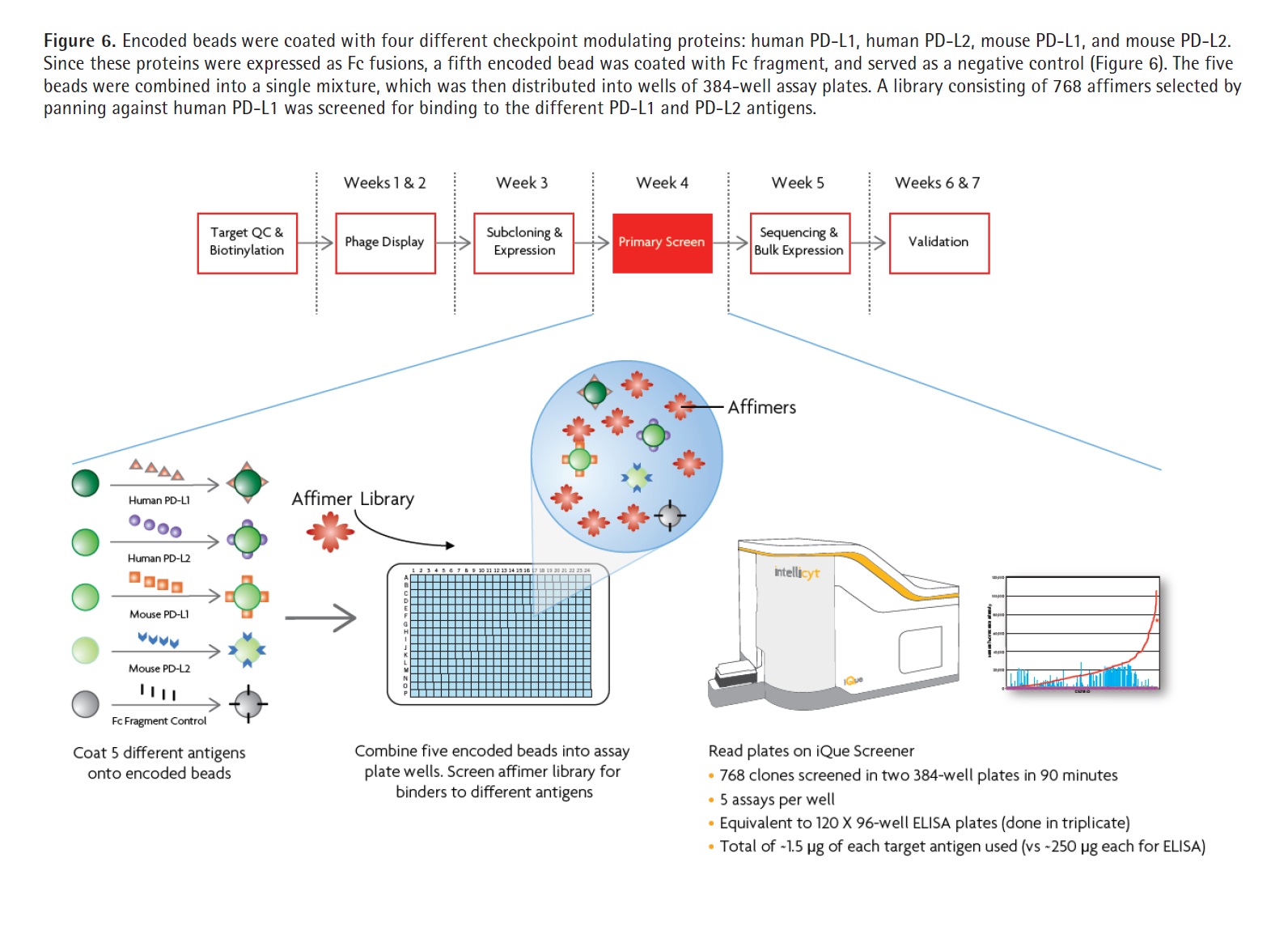 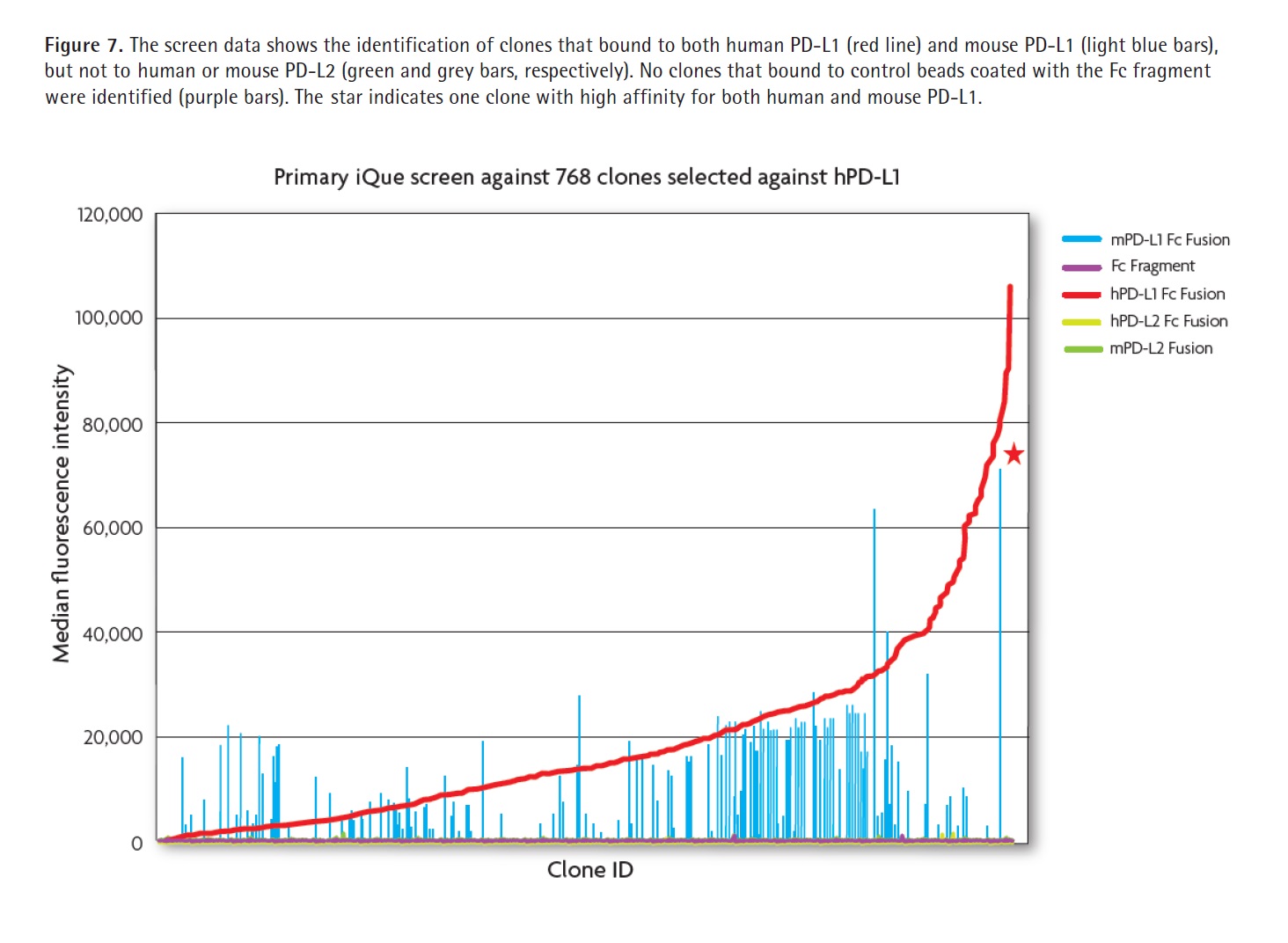 Benefits of the iQue Screener Platform

The iQue Screener is a flexible system for performing high throughput, multiplexed screens for circulating or cell surface antigens.

• Screens for antibodies against circulating antigens such as cytokines cytokines and other biomarkers can be performed with target antigens coated on multiple encoded beads.
• Cell based assays using encoded cells can be used to screen for antibody binding to multiple surface antigens presented in their natural conformation in intact cells.

Additional benefits of multiplexed antibody screening with the iQue Screener:

This white paper was sponsored by Sartorius, you can download the orignal PDF here