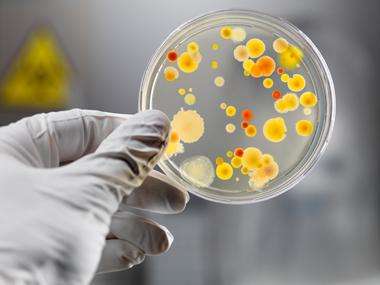 Emphysema is a progressive, debilitating disease that affects approximately 4.1 million people in the United States or roughly 1% of the US population. The disease is characterised by destruction of lung tissue as a result of inflammation caused by exposure to noxious inhaled agents for extended periods.

The most common cause of this condition is cigarette smoking, although genetic and occupational causes account for up to 10% of cases (3). Despite aggressive public health initiatives aimed at discouraging the use of cigarettes, smoking-related lung diseases remain a significant cause of disability and death in the United States. Currently there are 46 million smokers in the US (4). Due to the number of current and new smokers, emphysema is expected to remain a leading cause of morbidity and mortality in the United States for years to come.

Emphysema is unique among the obstructive pulmonary diseases in that it involves irreversible destruction of alveolar tissue of the lung (5). By contrast, asthma and other forms of COPD (chronic bronchitis) primarily affect the airways.

In emphysema, the tissue damage is secondary to chronic inflammation which eventually causes a decrease in lung elastic recoil, progressive hyperinflation and gas trapping due to premature closure of small airways (6,7). The disease results in a remodelling process whereby the lung becomes too large to fully expand and function effectively within the rigid chest cavity.

Emphysema patients experience chronic shortness of breath, limited exercise capacity and a reduced quality of life. The mortality rate for the approximately 125,000 US patients who are most severely affected by the disease (ie, those with GOLD Stage IV disease defined by lung function tests that are <30% of normal), is 10% annually (8).

Treatments in the first category include:

Treatments effective in managing acute exacerbations include steroids and antibiotics, which have been shown to shorten hospitalisation or recovery time (9,10). Even when effective in ameliorating symptoms, however, these therapies neither cure nor effectively stop the progression of the disease.

Surgical treatment for emphysema, in the form of lung volume reduction surgery (LVRS), has proven beneficial for selected patients. LVRS is a surgical procedure in which damaged areas of lung are resected to increase breathing capacity and reduce lung hyperinflation.

Whether performed via median sternotomy or less invasive video-assisted thorascopy, LVRS involves major thoracic surgery in a typically elderly population suffering from advanced emphysema, in many cases accompanied by a variety of comorbid conditions. Thus, the procedure is associated with substantial risk. The median length of hospital stay for LVRS is 10 days (range 8 to 14 days) in the US and 22 days (range 4 to 161 days) in Canada (11).

Overall, a selected subset of patients randomised to LVRS experienced significant improvements in lung function, exercise capacity and quality of life. However, the 90-day mortality associated with LVRS was 5.5% versus 1.2% in medically treated patients (12). Moreover, surgical lung volume reduction was associated with a high incidence of clinically significant morbidity.

Thus, for selected patients with advanced emphysema, the surgical treatment option reduces symptoms, increases exercise capacity, improves quality of life and may even extend longevity, but these operations are associated with substantial mortality and morbidity and access to them is limited (14). Alternative therapies that offer similar physiological and functional benefits without the risk of LVRS would represent a major advance in the treatment of emphysema. 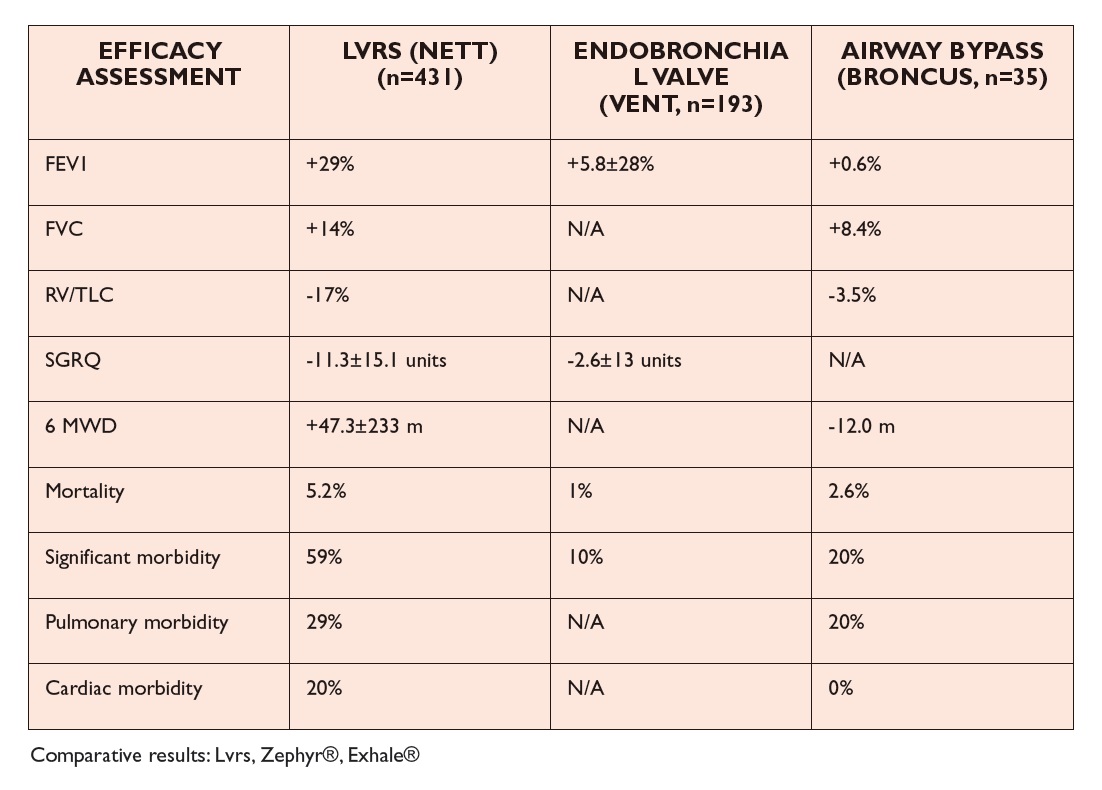 Several companies are investigating devices that are intended as minimally invasive alternatives to LVRS. Emphasys Medical, Inc (Redwood City, CA) has completed a pivotal trial (the VENT trial) of its Zephyr® Endobronchial Valve, which is intended to reduce volume in the diseased portion of the emphysematic lung without the risks and complications of surgery.

Endobronchial valve therapy consists of placing small, one-way valves in patients’ airways to control the flow of air into and out of diseased portions of the lung. A typical procedure involves placing 3-4 valves in the target lobe and, according to the company, takes approximately 20 to 40 minutes to complete (15).

During the procedure pulmonologists and thoracic surgeons use the Exhale product to create and support new passages in the lungs to bypass the collapsed airways caused by emphysema, allowing trapped air to exit the lungs (16).

Spiration, Inc’s (Redmond, WA) IBV valve, currently the subject of a pivotal trial, also seeks to provide a safe, minimally invasive alternative to LVRS. The valves are inserted via bronchoscope in the airways of the diseased lung, and work to redirect air flow to healthier regions of the lung (17).

No conclusions can as yet be drawn about the ultimate clinical utility of any of these devices. But early data from publications or professional society presentations, available for the Zephyr® and ExHale® products, does not yet support clinical efficacy equivalent to that of LVRS.

Aeris Therapeutics has developed a novel bronchoscopic system for achieving the benefits of lung volume reduction without surgery (18,19). The AeriSeal Biologic Lung Volume Reduction (BLVR) System, a new investigational therapy for emphysema, reduces hyperinflation by collapsing and remodelling diseased areas of the lung over a period of 4-6 weeks.

These components are delivered simultaneously through a dual lumen catheter to targeted diseased lung subsegments. They flow into the alveolar compartment and polymerise in situ to produce a hydrogel which effects therapeutic lung volume reduction by scarring and collapsing the treated area.

BLVR has been tested extensively in large animal models (20-22). Results from sheep studies have demonstrated both safety and efficacy of the BLVR drug products when used in combination with the BLVR Delivery System. Biocompatibility studies in small animals and tissue culture models have demonstrated that the BLVR Dual Lumen Catheter is non-toxic, non-sensitising and non-irritating.

The current BLVR formulation was examined in a toxicology study in sheep and was found to have no significant associated toxicity as assessed by clinical parameters, blood work, CT scan, pulmonary function, and gross and microscopic pathology beyond the anticipated inflammatory response and therapeutic scar formation at sites of treatment. Several animals had fevers on the first day following BLVR which resolved without treatment.

No renal toxicity as measured by BUN, serum creatinine, necropsy examination or histopathology has been observed in any of the 42 sheep that have been treated with Aeris’ BLVR formulation. Safety is further supported by the results of Aeris Phase I and Phase II clinical trials in which there has been no evidence of treatmentrelated elevations in BUN or creatinine, alterations in urine analysis or creatinine clearance, or evidence of renal injury assessed by renal ultrasonography.

Aeris has conducted Phase I and Phase II testing of the BLVR System in patients with advanced emphysema with favourable results. In Phase II studies, Aeris has defined a therapeutic dose for the BLVR System that reduces gas trapping, improves spirometry, and improves health-related quality of life indices out to six months in patients with advanced upper lobe predominant emphysema.

Therapy with 20mL of BLVR Hydrogel administered bronchoscopically to 22 patients at eight subsegmental sites was associated with increases in FEV1, FVC, gas trapping (as measured by the RV/TLC ratio) and health related quality of life comparable to that observed with LVRS.

These findings were achieved with no treatment related deaths, and a single serious medical complication (a post-procedure pulmonary embolus that was associated with a lower extremity deep venous thrombosis). Numerous patients experienced flu-like symptoms associated with the localised inflammatory response that is central to the method of action of the AeriSeal product; in every case these symptoms were self-resolving. Others experienced COPD exacerbations, likely in response to the bronchoscopy procedure itself.

Aeris is preparing to confirm Phase II observations and demonstrate that BLVR produces statistically significant and clinically meaningful improvements in lung function and quality of life in a Phase III clinical programme. Two distinct clinical trials will each enroll 225 patients, of whom 150 will be randomised to BLVR therapy and 75 will be randomised to sham bronchoscopy.

These ‘responder analyses’, while often more difficult to demonstrate than the usual regulatory precedent of ‘mean changes per group’, were selected because they are readily understood by both clinicians and the patients, and because they are robust. Data on mortality and morbidity will also be carefully collected to provide safety information about BLVR therapy, as well as information on adverse events and serious adverse events experienced by patients throughout the course of the study.

The Biologic Lung Volume Reduction System shows promise as a potentially safer and comparably effective alternative to lung volume reduction surgery for advanced emphysema patients. It is unique among investigational emphysema therapies in its use of a combination of drugs and biologics to effect therapeutic remodelling of the diseased lung.

The system has other potential advantages over the available and investigational alternative therapies. Unlike medicines commonly used for emphysema relief which target the airways, BLVR addresses the real problem of degraded alveolar tissue and consequent enlargement of the lung. BLVR does not require constant medication – all traces of the bioactive ingredients disappear from the body within a short time after treatment. This last is also an at least theoretical advantage over investigational devices currently being studied for emphysema; BLVR leaves nothing behind that might potentially fail, move, or become the site of an infection.

Finally, unlike LVRS, which as a major thoracic procedure performed on a fragile patient population cannot be repeated upon further progression of the disease, the minimally invasive and simple BLVR procedure may be repeated as the inexorable progress of emphysema requires.

Whether these potential advantages will prove to be real remains to be seen. The phase III AeriSeal programme will address the efficacy of BLVR, but a final judgment on the appropriate use and relative merits of different approaches to emphysema treatment will depend upon accumulation of a substantial body of clinical data and experience on all of the competing investigational therapies. DDW

This article originally featured in the DDW Fall 2008 Issue

Dr Edward E. Berger has worked in the proprietary life sciences sector for more than 20 years, for much of that time as a member of the senior management team of companies including Fresenius Medical Care – North America and ABIOMED, Inc. He founded Larchmont Strategic Advisors in 2005 to help emerging life sciences companies deal effectively with the strategic challenges and opportunities posed by the rapidly evolving healthcare regulatory and policy environment.

3 Standards for the diagnosis and care of patients with chronic obstructive pulmonary disease. Am J Resp Crit Care Med. 1995; 152: S77-S121.