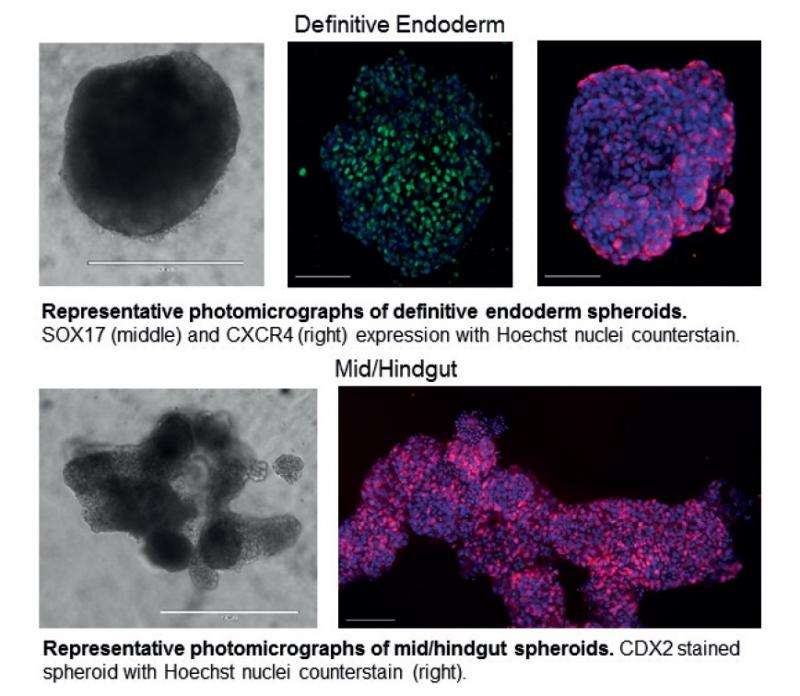 The use of human-induced pluripotent stem cells (HiPSCs) continues to grow in three-dimensional (3D) spheroid and organoid culture.

Although advances in 3D cell culture systems are improving drug target validation and lead optimisation, it is the advancement of organoid cell culture that is making a significant impact in disease modelling and drug discovery.

In this article, we examine the use of organoid cell culture systems as applied to cancer research and the development of novel antioncologic drugs. Collectively, this transition from 3D spheroid culture to organoid culture allows researchers to generate multiple organ-specific cell types, resulting in cell architectures that more closely resemble the human tissue microenvironment. Furthermore, researchers are generating organoid cultures that are increasingly complex and more phenotypically relevant and, as a result, optimal models are being established to better understand patient-specific tumour proliferation and invasion patterns.

As 3D cell culture has become more widely accepted, researchers have become more proficient with 3D techniques and the models being created have become more complex. Researchers now create spheroids made of multiple cell types (1), combine tools to create advanced co-culture models (2) and are recapitulating organs from stem cells, including human iPS (HiPSCs) cells to the form of organoids (3).

These recent advances in 3D cell culture and greater adoption of HiPSCs for basic research and drug discovery are coalescing to generate systems that provide numerous advantages over more traditional, established culturing systems. While 3D systems provide more in vivo-like tissue environments in which to study cell function, patient-derived HiPSCs provide a better model of human disease pathophysiology than other model systems. Consequently, researchers can now better study the complex in vivo functionality of tissue and organ systems, and can monitor patient-specific response to treatment prior to clinical evaluation (4). As discussed in a prior issue of this publication, organoids – and more complex organ systems – are now being leveraged for lead optimisation, including estimations of compound preclinical toxicity and potential metabolic liability. 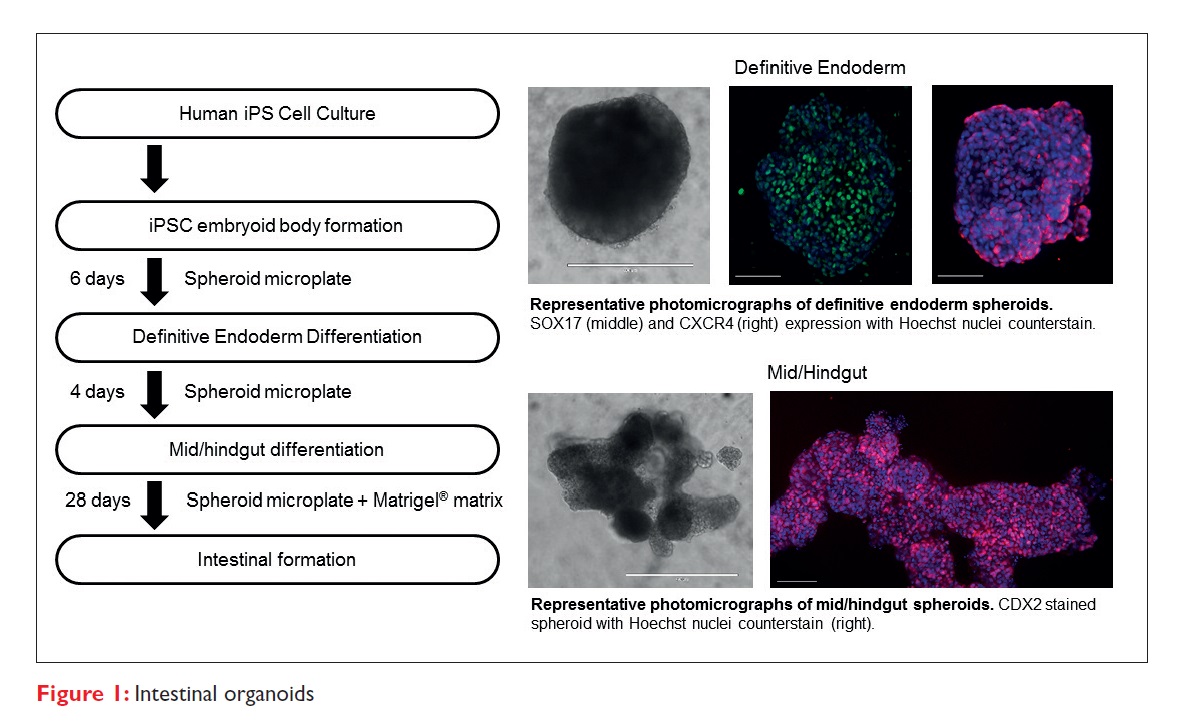 Using HiPSCs, several organoids have now been generated including brain (5), eye (6), intestine (7) (Figure 1), liver (8), lung (9), heart (10) and kidney (11) (summarised in Table 1). These models offer researchers a tool to better study tissue formation, renewal and function while maintaining many of the disease characteristics of the individual from which the cells were sourced (3). 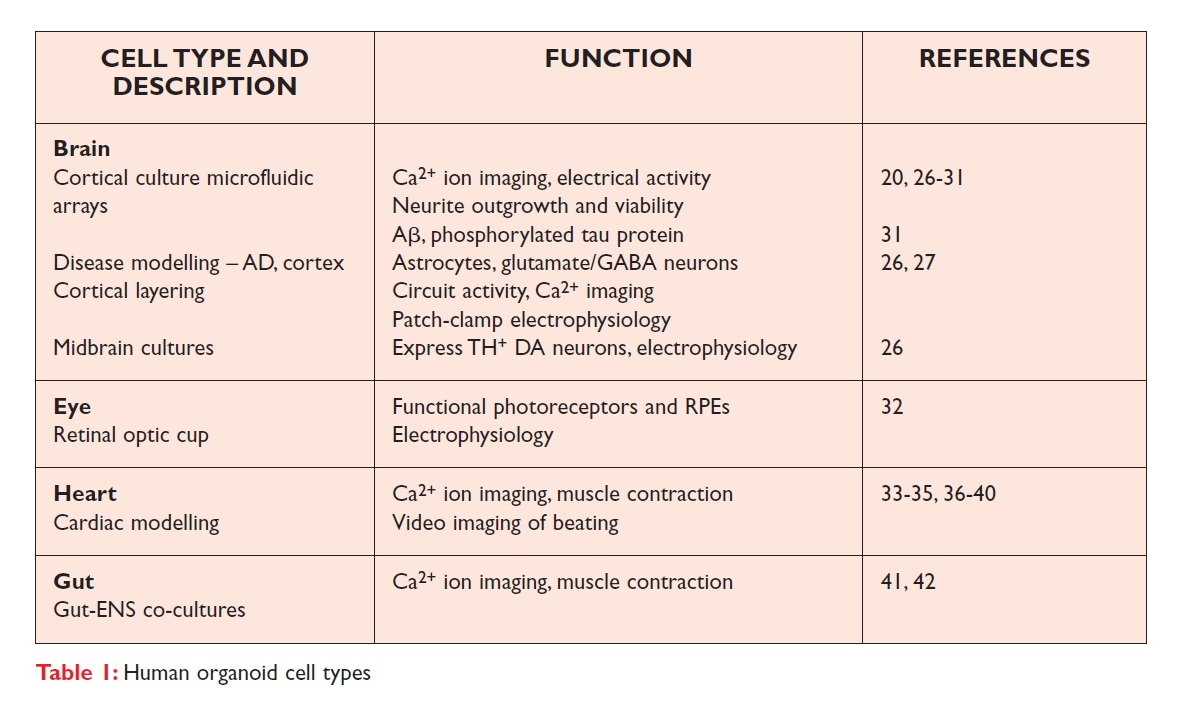 A diverse array of model systems is available to investigate the disease mechanisms that promote tumorigenesis. Such systems range from simplistic 2D cultures that rarely recapitulate the true complexity of human cancer, to very expensive and complex mouse models that seldom reflect the pathophysiology of human tumour progression. In a climate where the clinical trial success rate for oncology drugs is only 3.4% (12), cancer researchers are adopting 3D culture techniques to study human cancer biology and develop novel, efficacious treatments for cancer patients.

Two clear examples of these advantages can be found in research related to breast cancer. Pickl et al (15) demonstrated that breast tumours cultured in 3D express higher sensitivity to trastuzumab than those cultured in 2D, as the cells of the 3D cultures display increased activation and dependence on HER2 and HER3 signalling. Trastuzumab blocked HER2 and HER3 activation and proliferation of 3D cultures but not 2D-cultured cells.

Nonetheless, the limitations of 2D cell culture are most clear in neurological research. Indeed, 2D cultures lack the complexity of the brain in terms of function and development (18). 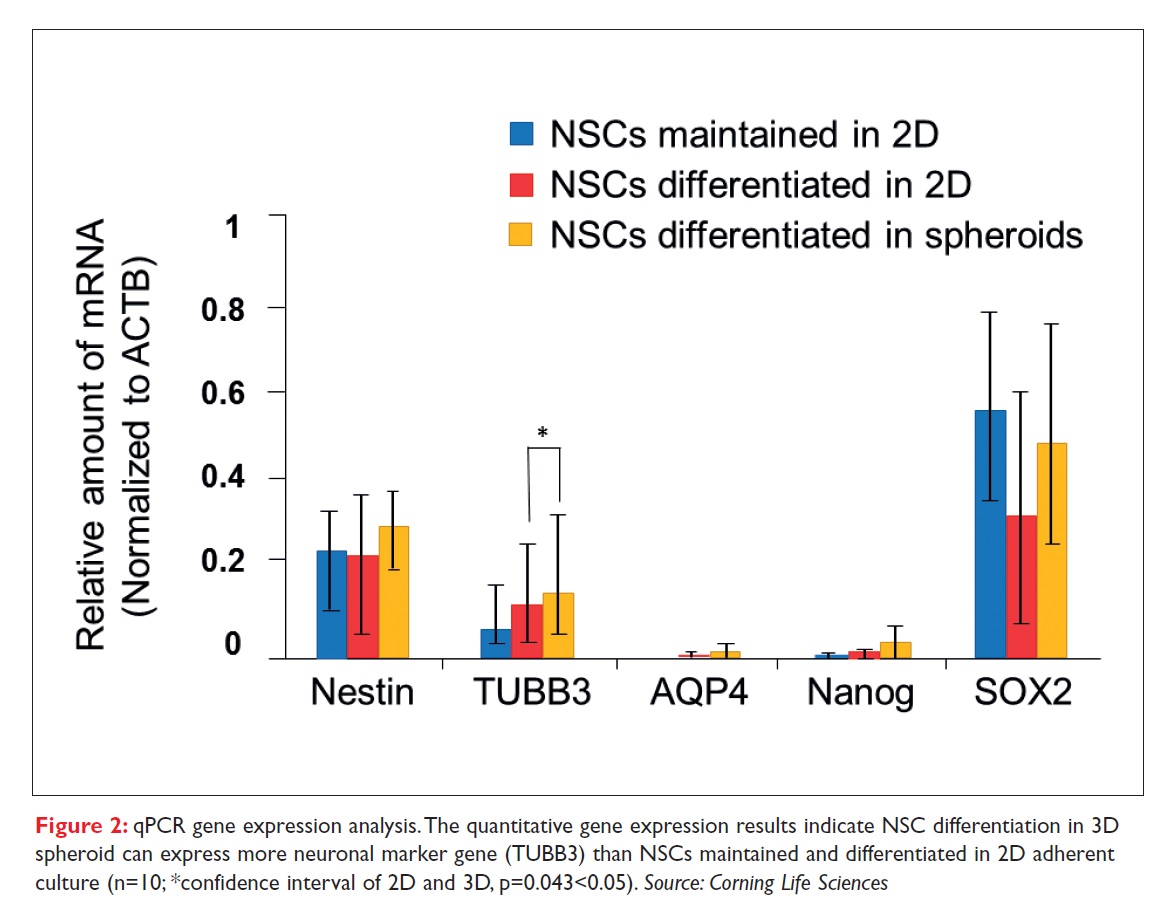 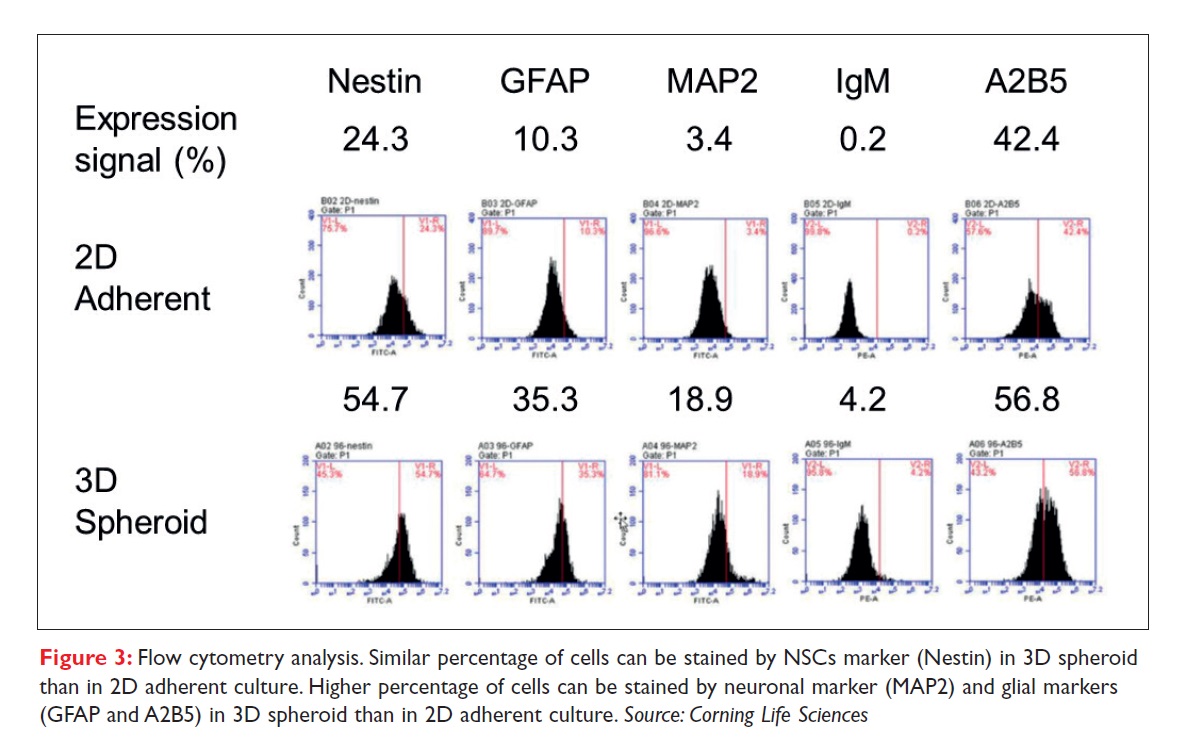 Progress has also been made in generating HiPSC-derived neuronal organoids that display a level of self-organisation that is not recapitulated in 2D cell cultures, suggesting a promising advance in understanding neurodegenerative diseases, such as Parkinson’s and Alzheimer’s disease (19-21). Figure 4 illustrates the classification of brain models, from less complex 2D neural aggregates to highly complex in vivo animal models.

Three-dimensional cultures of HiPSC-derived neuronal cells have been generated in large-scale arrays and imaging technologies used to measure neurite outgrowth. HiPSC-derived neurons from patients with familial Alzheimer’s disease mutations can be grown in 3D cultures for at least eight weeks. It was shown that diseased neurons expressed several key proteins involved in Alzheimer’s disease neurodegeneration, including Aβ and phosphorylated tau protein. These data may provide a screening format to identify compounds acting to reduce the production of these disease-causing biomarkers (20).

Another recent study monitored the expression of Aβ in 3D cell cultures of HiPSC-derived neurons from five different patients with familial Alzheimer’s disease. They measured the action of known inhibitors of β– and γ-secretase (enzymes responsible for generating neuronal Aβ), and cultured the neurons for up to nine weeks to generate more mature neurons for drug testing. The addition of β– and γ-secretase inhibitors lowered Aβ levels in the neurons cultured in 3D, but their efficacy was markedly less than that in 2D cultures of the same cells – likely due in part to reduced bioavailability. It was also shown that neurons from a patient in which the β-secretase inhibitors were ineffective lacked key proteins required for enzyme inhibition.

These data, and other reports, suggest that drug efficacy is affected by the variability in the cell genome and proteome of different patients. They also reiterate the advantage of 3D cell culture versus 2D cell culture as a predictor of human drug efficacy in vivo. This is particularly relevant given that β-secretase inhibitors have now all failed to show efficacy in late-stage clinical trials (21). This also illustrates the importance of screening HiPSC-derived neurons from multiple patients to estimate variations in clinical efficacy.

Glioblastoma multiforme (GBM) is the most lethal, as well as the most common, type of primary brain tumor in adults. The research and drug development work focused on GBM has been limited by pre-clinical models that relay on cell autonomous in vitro models, or in vivo models that poorly simulate human disease. Tumours are complex systems that are greatly influenced by their host. While several 3D models of cancers have been developed, all are fundamentally limited and only address some aspects of GBM.

Patient-derived glioma stem cells (GSCs) are the accepted standard for studying GBM biology (22). This subpopulation of cells is the most phenotypically- relevant to the parental tumour, and is imperative for tumour initiation, maintenance and invasion. In addition, GSCs demonstrate an increased resistance to cytotoxic drugs and ionising radiation.

GSCs are not cell autonomous, however, but are instead greatly influenced by tumour host-cell interactions. Efforts to generate 2D co-cultures of GSCs with neurons, glia and other brain-specific cell types often result in disorganised cellular structures that are not representative of the human brain. Furthermore, while tumour organoids allow GSCs to grow within a 3D extracellular matrix, they do not address the criticality of the tumourhost tissue microenvironment interactions.

Using Corning® Matrigel® as a 3D extracellular matrix, hESCs were differentiated into fullyformed cerebral organoids. GFP-labelled GSCs were then co-cultured with individual cerebral organoids for 24 hours. The tumour take rate was 100% for all GSC lines, and considerable tumour growth was detected one week after co-culture of the tumour-infiltrated organoids. Additionally, the tumour-bearing organoids recapitulated the tumour morphology found in human patient GBMs.

The interrogation of the growth patterns of six patient-derived GSC lines in the model revealed dramatically differentiated patterns and degrees of tumour cell invasion and proliferation between the different lines. This differentiation reflects the heterogeneity of the invasive phenotypes clinically observed in patients.

The GLICO model addresses several limitations presented by prior models, allowing researchers to study patient-specific GBMs within a microenvironment like that of a human brain. Because it is grown ex vivo, the model can be used for experimental drug treatment. In addition, the model is scalable for high throughput drug screening, opening the possibility for successfully screening tumour cells for clinically active drugs and other interventions.

The culturing of human-derived tissues in 3D organoid systems presents a major advance in drug discovery and, specifically, the ability to successfully screen tumour cells in vitro for clinically active drugs. Compared to 2D cell culture, 3D cultures provide more architecturally-relevant barriers for compounds to pass through, a critical factor in determining efficacy. Additionally, 3D culture systems better model cell-cell interaction, a benefit most apparent in complex tissues such as the brain. Finally, the temporal aspect of 3D cell culture – which in many cases is long lived – is important when modelling diseases such as neurodegenerative diseases, which are often slow to develop.

As researchers have become more proficient with 3D techniques, the models being created have become more complex. Researchers can better study the in vivo functionality of tissue and organ systems, and monitor patient-specific response to treatment. The generation of organ-specific organoids using hPSCs are proving to be particularly powerful tools for cancer research as they allow for the study of organ development and tissue morphogenesis, as well as better modelling of diseases (24). These advances, along with those in high throughput screening, are leading to more clinically-relevant models.

In the future, researchers will likely continue to move more toward patient-specific treatments and personalised medicine. Technologies and methods such as those used to generate patient-specific organoids, renewable human tissue (24) and 3D bioprinted cancer models (25) are advancing and providing a window into the future.

This article originally featured in the DDW Spring 2019 Issue

Dr Amanda Linkous previously served as the Director of the Starr Foundation Cerebral Organoid Translational Core at Weill Cornell Medicine (New York, NY). Dr Linkous is currently the Scientific Center Manager for the NCI’s Center for Systems Biology of Small Cell Lung Cancer (SCLC) at Vanderbilt University, where she is developing similar 3D model systems to study the biology and refractory nature of SCLC (Nashville, TN). She completed her postdoctoral training in the Neuro-Oncology Branch at the National Cancer Institute (Bethesda, MD).

Hilary Sherman is a Senior Scientist in the Corning Life Sciences Applications Lab located in Kennebunk, ME. Hilary has been with Corning Incorporated since 2005 and has worked with a wide variety of cell types including mammalian, insect, primary and stem cells in a vast array of applications. Her key roles at Corning involve creating technical documents such as protocols and whitepapers as well as providing technical support and training for both the Corning sales force and customers. Hilary received her BS degree in Biology from the University of New Hampshire.

Mei (Iris) Li is Director, Global Scientific Applications and Support of Corning Life Sciences. Iris has been with Corning Life Sciences since 2008. She focuses on management of field applications support, technical call centres and technology centres. She has experience in developing a strong support base for product applications and ensuring the successful implementation of technology strategy in defined markets. Iris holds a Masters degree in Biology from the College of William and Mary.

Dr Richard M. Eglen is currently Vice-President and General Manager of Corning Life Sciences, an operating division of Corning Incorporated based outside of Boston, Massachusetts (USA). Dr Eglen has more than 40 years’ experience in the Life Sciences industry. Prior to joining Corning in 2011, he was President of bio-discovery at PerkinElmer and held other executive management positions in the pharmaceutical, diagnostic and biotech industries. Dr Eglen has extensive experience in drug discovery, including serving as Executive Vice-President for research and development at DiscoveRx Corp (now Eurofins Pharma Discovery Services), and as Vice-President of the Center for Biological Research at Roche Pharmaceuticals. At Roche, he was responsible for leading drug discovery programmes in the areas of cardiovascular disease, migraine, neuropathic pain and urinary tract disorders.